A McDonald’s customer was ‘disgusted’ to find green eggs inside her two sausage and egg McMuffins – but the fast food giant says the colour is just a natural reaction.

The woman, who did not want to be named, visited the Clayton Square McDonald’s at 7.30am on her way into work in Liverpool city centre.

She purchased two sausage and egg McMuffin meals, with hash browns and hot drinks for herself and a relative.

However, when it came to unwrapping her meal, she was horrified to find her food looking discoloured and ‘mouldy.’

Speaking to the Liverpool ECHO, the woman said: ‘I went to Maccies this morning at 7.30 on my walk to work and got two sausage and egg McMuffins. 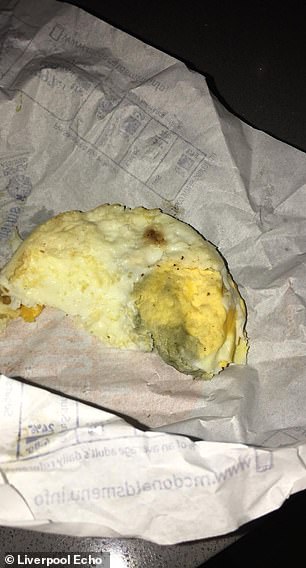 The woman, who did not wish to be named, visited the Clayton Square McDonald’s and purchased two sausage and egg McMuffin meals, with hash browns and hot drinks for herself and a relative

‘I sometimes take the egg off so I checked the egg.

‘It looked blue and mouldy, it had gone green. [The other one] was green too. It was black in the middle.’

However, a McDonald’s spokesperson told the local paper is was ‘factually and scientifically incorrect’ to state the eggs were ‘mouldy’ and claimed the discolouration is due to a ‘reaction’ that occurs in the product.

Annoyed at having her McDonald’s breakfast ruined, she went back to the fast food branch to show the staff what was wrong.

She said: ‘I took it back and said ‘can I have a word please?’, I wasn’t aggressive or anything.

‘I said if a kid was to eat this they wouldn’t be very well. She said ‘when did you order them?’ and I said 7.30 and she said ‘so why have you only come back in now?’ 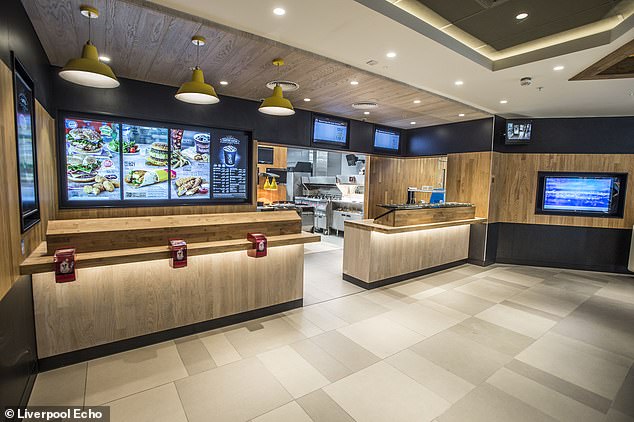 ‘She said if they sit out they will go blue like that. They offered me a refund.’

She added: ‘Someone else in the queue had the same problem with egg. [The staff member] said they couldn’t sit there for 15 minutes or longer but this lady had only been there about two minutes.

The woman’s meal left her worried about what would have happened if she’d bitten straight into her McMuffin rather than checking the egg first.

She said: ‘If someone ate it they would be ill. I go away tomorrow to Amsterdam – I might have missed my holiday with an upset stomach.’

A McDonald’s spokesperson told the local paper: ‘Because we use freshly cracked free-range eggs throughout our breakfast menu, this discolouration is a natural reaction between the hydrogen sulphide in the egg white and the iron in the yolk.

‘As soon as the customer made us aware of their concern, we offered a full refund and we recommend they get in touch with our Customer Services Team should they wish to discuss further.’