Stunned onlookers filmed what appeared to be a convoy of traveller vans fly-tipping tonnes of rubbish at a Tesco car park.

The footage shows a truck near the recycling area of the car park in Barking, east London as it unloads black bags of household and building waste.

As the vehicle unloads its huge pile of rubbish, a man helps to add stray items onto the ever-growing stack of waste

The brazen man then hops back into his van as it retracts its tipper.

A spokesman for the London Borough of Barking and Dagenham confirmed they were aware that a traveller encampment had been set up at the Tesco alongside the A406 on the border with Newham.

Photos showed two trucks filled with rubbish racing towards the car park before depositing their loads.

Others showed what appeared to be a convoy of trucks in the car park.

The spokesman said: ‘We are aware of it.

‘Historically the council has an injunction on traveller encampments across the board.

‘Unfortunately that Tesco happens to be private land so our injunction doesn’t cover it but I have been made to understand that they were moved yesterday morning.’

And he added: ‘The landowner is responsible for cleaning up the rubbish.’ 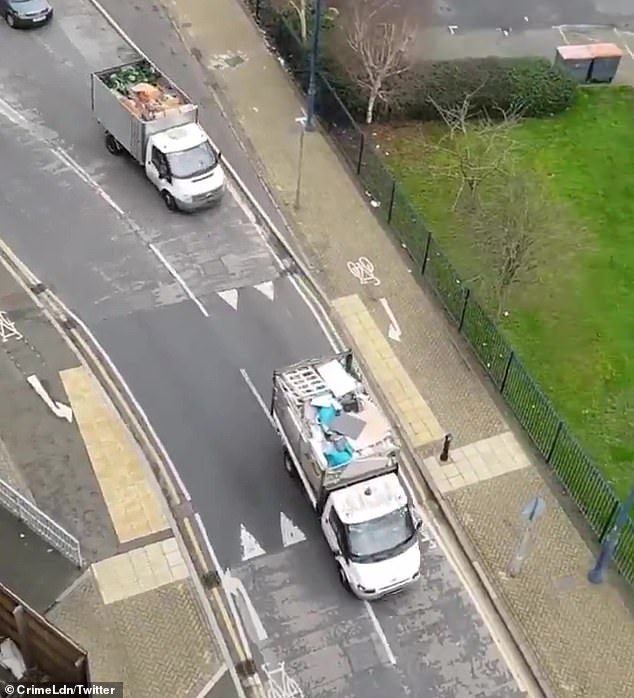 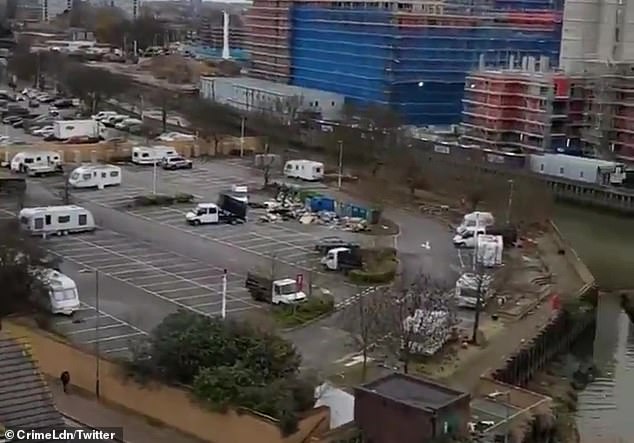 Those who saw the video posted on Twitter said they couldn’t believe their eyes.

One said: ‘Them vans won’t get a parking ticket. They will just put up the council tax to pay for the clearance.’

A second said: ‘At least they dropped it off by the recycling area. Disgraceful!!’

While a third suggested: ‘Lose your licence automatically and vehicle seized to cover costs.’