Disney fan raises $8.3million for his special needs daughter by selling off his memorabilia

An avid Disney collector has sold off his huge haul of memorabilia for the princely sum of $8.3million, with sale prices breaking multiple records.

Richard Kraft, a Hollywood agent and producer, displayed the collection of more than 900 items at an abandoned warehouse in Sherman Oaks, California, for about three weeks.

Tens of thousands flocked to see the exhibition ‘That’s from Disneyland!’ and the Disney fanatic even presided over a wedding at the venue, before everything was sold off over the weekend.

Kraft says he had spent 25 years collecting the memorabilia, ‘with absolutely no intention of seeing it as an investment or acquiring things to sell,’ but is delighted his decision to part with it will allow him to help his children – including a daughter who has special needs, and others like her.

Hollywood agent Richard Kraft has sold off his entire collection of Disney memorabilia. This Dumbo ride, which used to hang from his ceiling, sold for $483,000 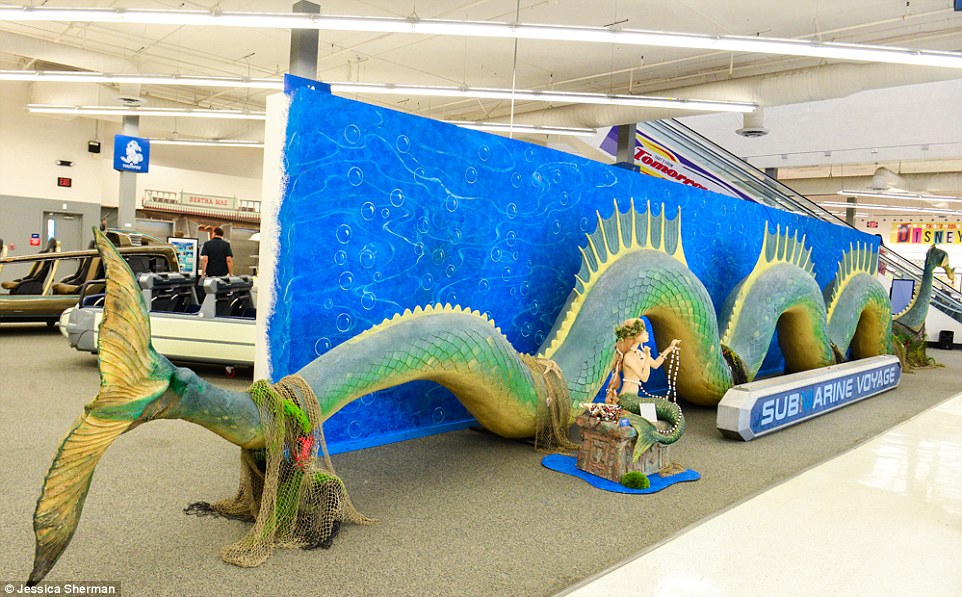 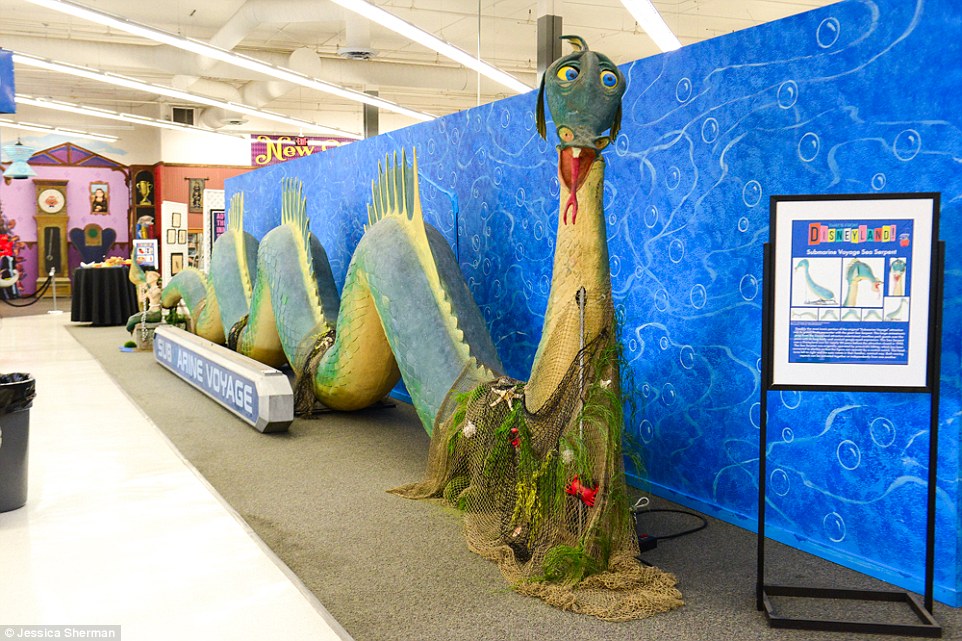 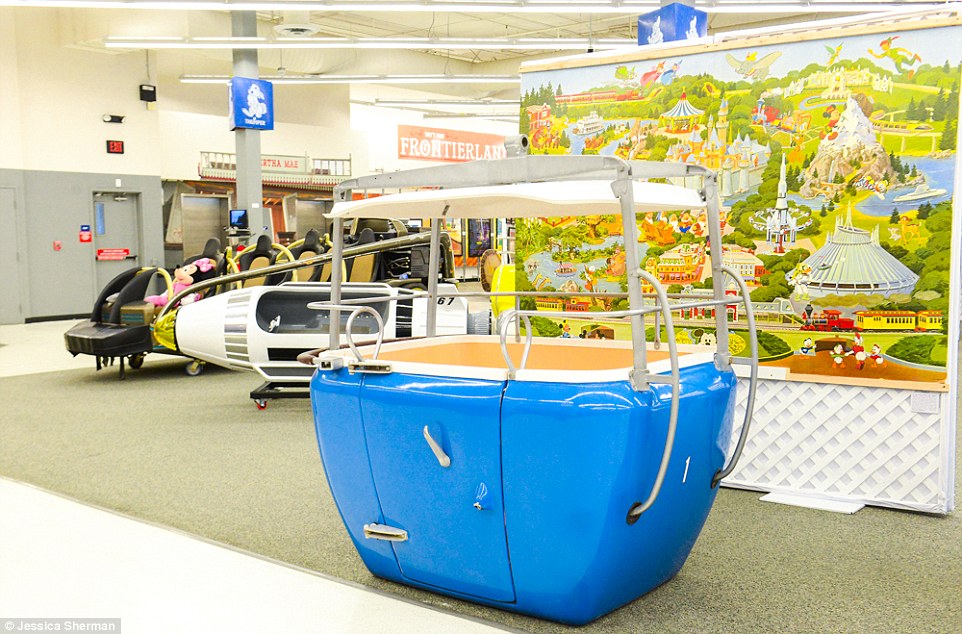 One of the original vehicles from Disneyland’s Skyway – a cable car style ride that took viewers over the park – sold for $621,000. The steep price made it the highest price ever paid for a Disneyland ride vehicle

‘[Collecting] has been purely for the joy of connecting to so many personal memories of the Happiest Place on Earth,’ he said.

‘When I finally decided to let it go, it became much more about throwing a grand Bon Voyage party to those magical artifacts than about making projections about their worth.

‘As the flood of astronomical bids came in, it made me think how these treasures were now securing the financial future of my children and allowing me to contribute towards other kids, like my daughter, with special needs.

‘I’m still in a state of shock that Dumbo, Jose the talking parrot and trash cans from Disneyland could make me feel as if I won the lottery.’ 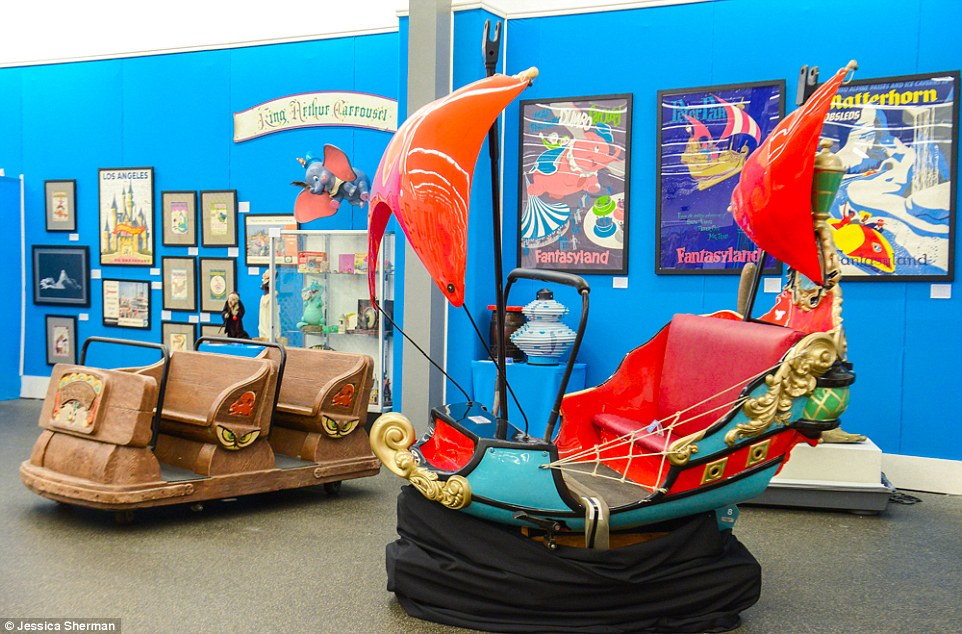 Walls of an abandoned warehouse were decorated in vintage posters, while colorful rides were scattered around for Disney fanatics to look at and take photos with

Kraft (left and right with daughter Daisy) said he was selling off the items to help secure his children’s futures, and would donate the excess profits to charities that helped people who had the same condition as his daughter Daisy 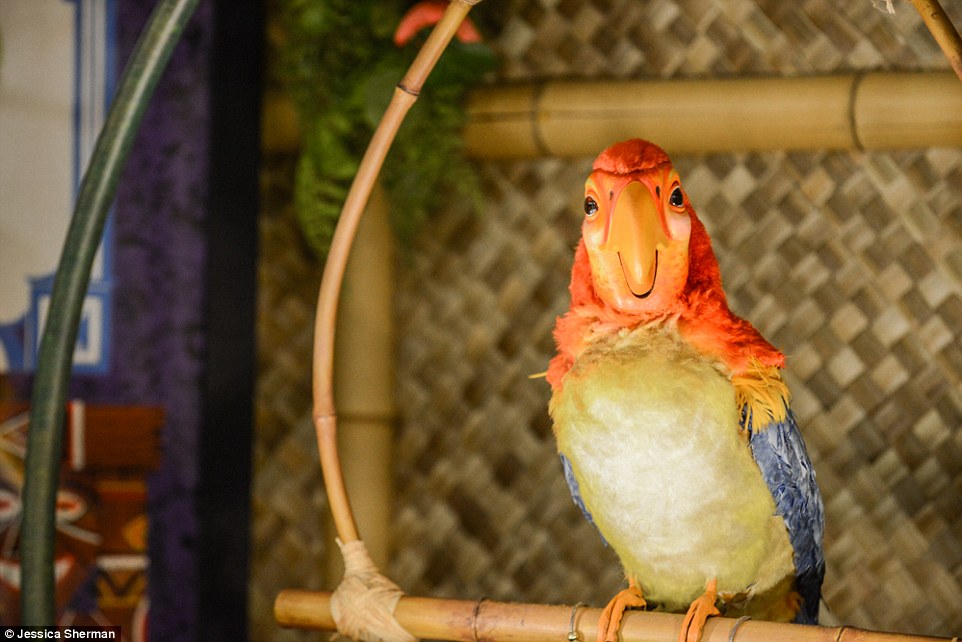 Jose, the animatronic bird from the Tiki Room, was one of many items that sold well above what Kraft believed he would get for it. The bird was purchased at auction on the weekend for $425,000

One of the original vehicles from Disneyland’s Skyway – a cable car style ride that took viewers over the park – sold for $621,000. The steep price made it the highest price ever paid for a Disneyland ride vehicle.

The sale of the entryway sign to the Pirates of the Caribbean also sold for a record-breaking $264,500 – the highest price ever paid for a Disneyland park sign.

Kraft began his collection 25 years ago in 1993, after the death of his older brother David, who had Chrohn’s disease.

Their parents would always take the brothers, who grew up just a few hours’ drive north of the Disneyland, to the park when David was healthy.

After David’s death, Kraft returned to the theme park of his childhood which brought back only great memories of his late brother.

‘These were the same sidewalks I walked as a child with my brother,’ Kraft earlier told CNN.

‘I’m not satisfied with a souvenir book or a little pennant: I had to actually own pieces of the park,’ says Kraft, who admits ‘I’m a bit obsessive.’

When he heard about an auction of Disneyland travel posters, he made his first bid on an Autopia poster from Tomorrowland and won.

Ever since then, he’s been hooked.

For 25 years his collection grew to include six ‘It’s A Small World’ animated dolls from the famous rise and hand-painted Haunted Mansion stretching portraits.

He bought a 40-foot sea serpent from the Submarine Voyage, a 38-foot Davy Crockett Explorer Canoe, and a 16-foot-tall neon script ‘D’ from the top of the Disneyland Hotel – which was purchased over the weekend by magician David Copperfield.

Kraft’s collection included a ‘PeopleMover’ vehicle, a ‘Mr Toad’ car, a mine car from the ‘Snow White’s Scary Adventure’ ride, and the ‘Submarine Voyage’ Sea Serpent.

The most expensive piece in the collection is the ‘Dumbo’ ride car that once soared above his living room. 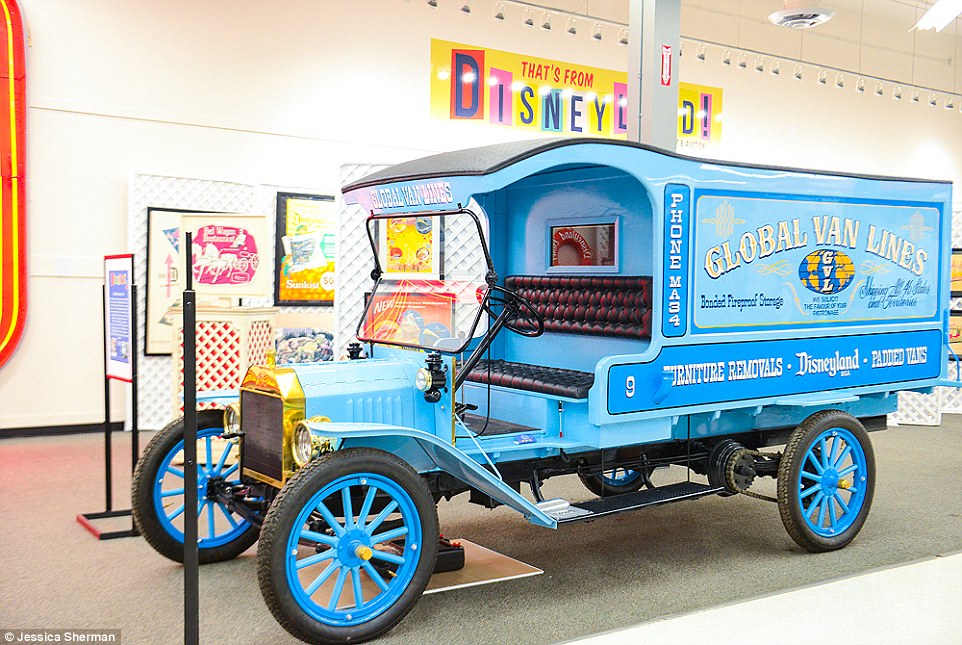 Kraft’s collection, which at one point had filled his home and backyard, was seen in perfect condition when it arrived at the exhibition 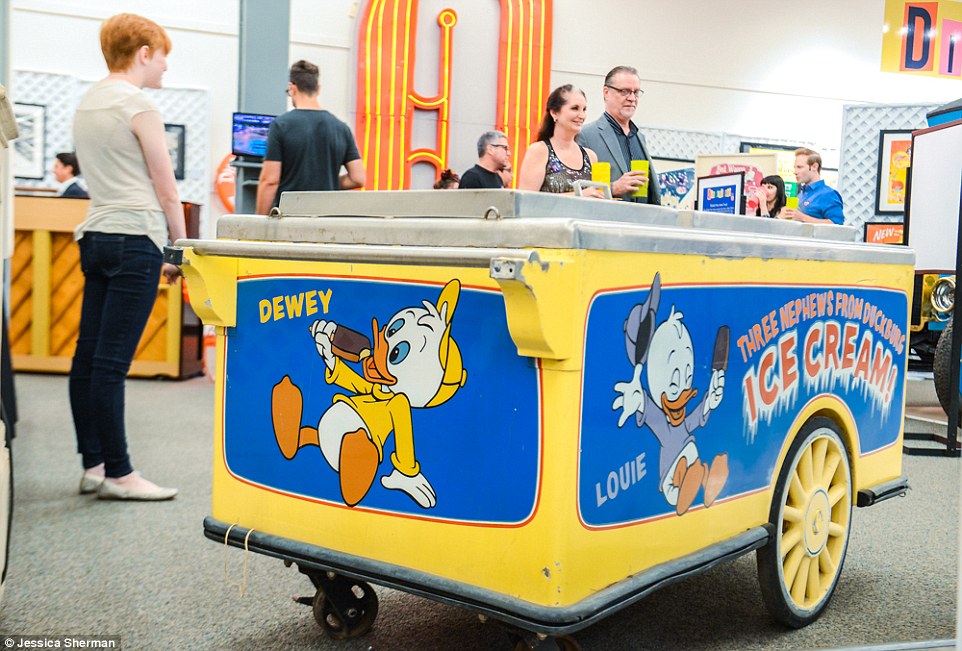 The collection did not just include ride cars and posters, but also icecream carts (pictured) and trash cans 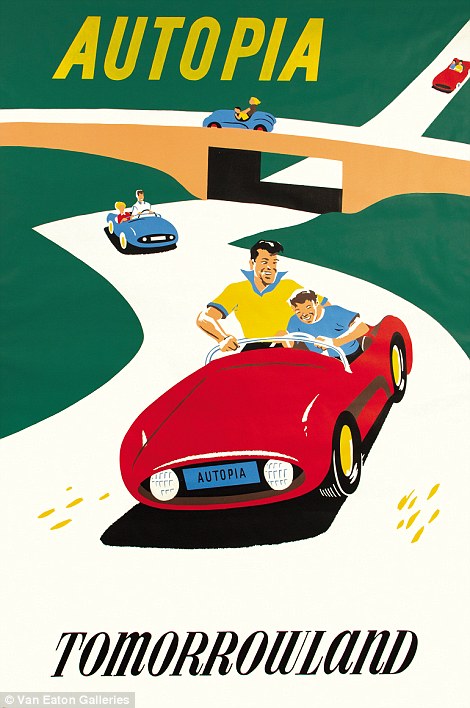 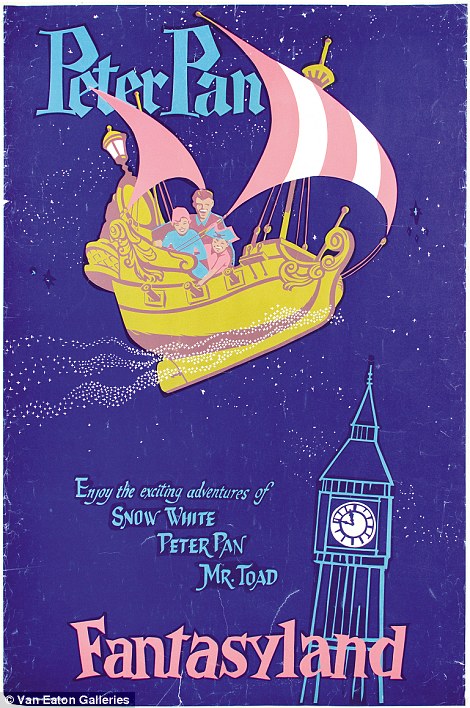 The Autopia poster from Tomorrowland (left) was Kraft’s first purchase in 1993. Since then, he has added many more pieces of memorabilia to his collection. The Autopia poster sold for $287,500 – the highest price ever paid for a Disneyland attraction poster

Kraft began his collection in 1993, after the death of his older brother David, who had Chrohn’s disease. He said the pair had holidayed at the park as children and he returned to look back on fond memories

Kraft sold his collection in part for his four-year-old daughter Daisy.

She was born with Coffin-Siris Syndrome, a rare genetic disorder that causes developmental delays and physical abnormalities.

Kraft says part of the proceeds from the auction will go to the Coffin-Siris Foundation and the CHIME Institute, which works with schools that specialize in putting children with special needs together.

However, he agreed on selling his beloved collection under the condition that it first goes on display for the month-long pop-up for the public to see.

Co-owner of Van Eaton Galleries, Mike Van Eaton, says this is ‘one of the most amazing private collections I’ve ever seen,’ and by far the largest Disney memorabilia auction he’s hosted.

‘You don’t see a lot of people with, say, a Space Mountain car in their backyard, or a 40-foot-long sea serpent, for that matter, by their swimming pool. It’s the kind of collection you’ll see once in a lifetime,’ Van Eaton said.

Kraft has also purchased items at past Van Eaton auctions, and had specifically sought out Mike when he made the decision to sell. 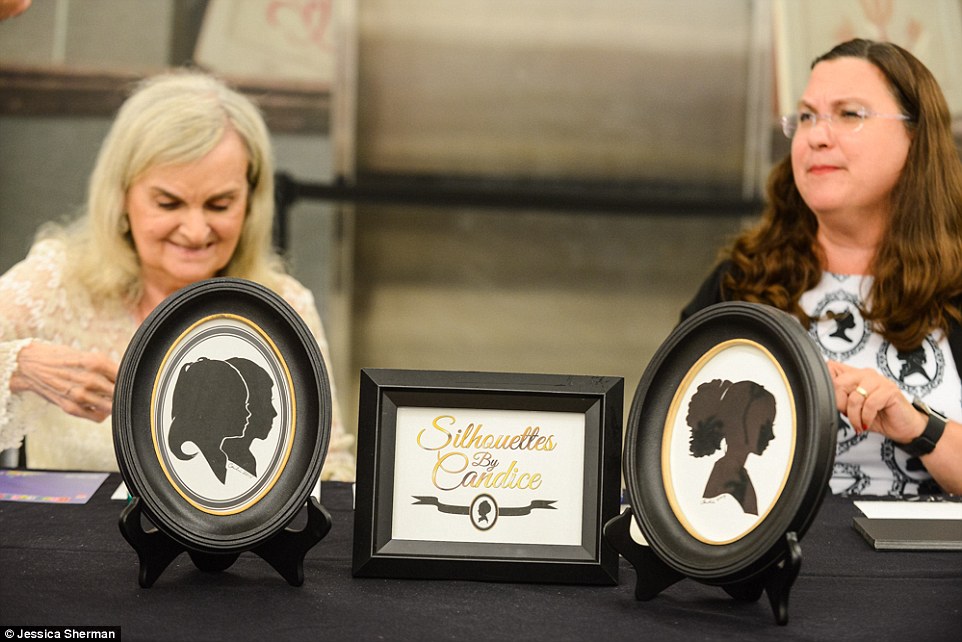 Kraft’s exhibition was interactive, with guests able to have their silhouette copied at one booth 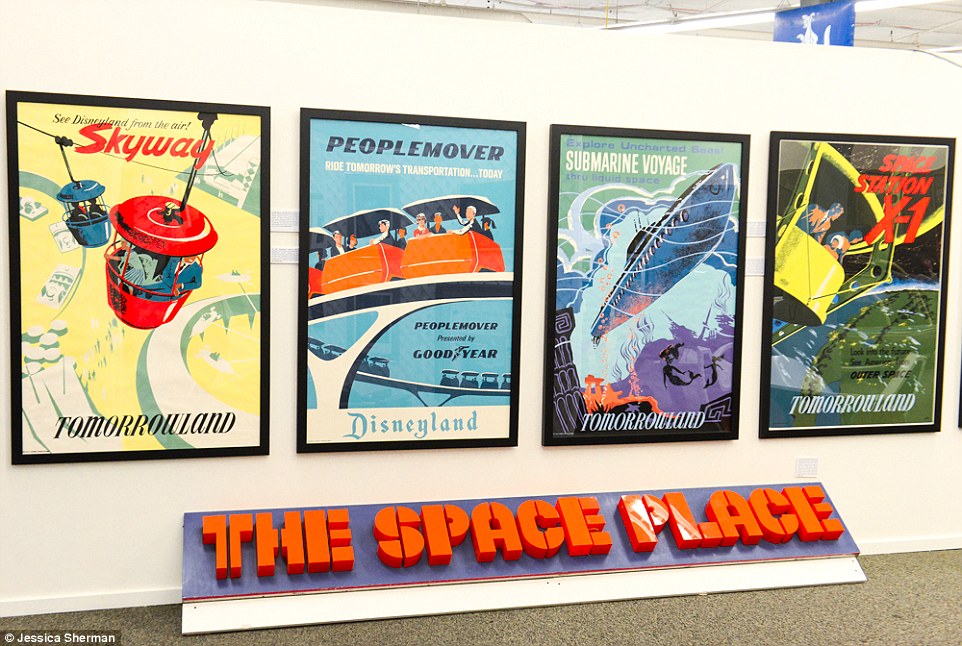 Kraft’s collection includes rides, signs, posters and amenities from the park and was considered possibly the biggest privately owned Disney collection in the world 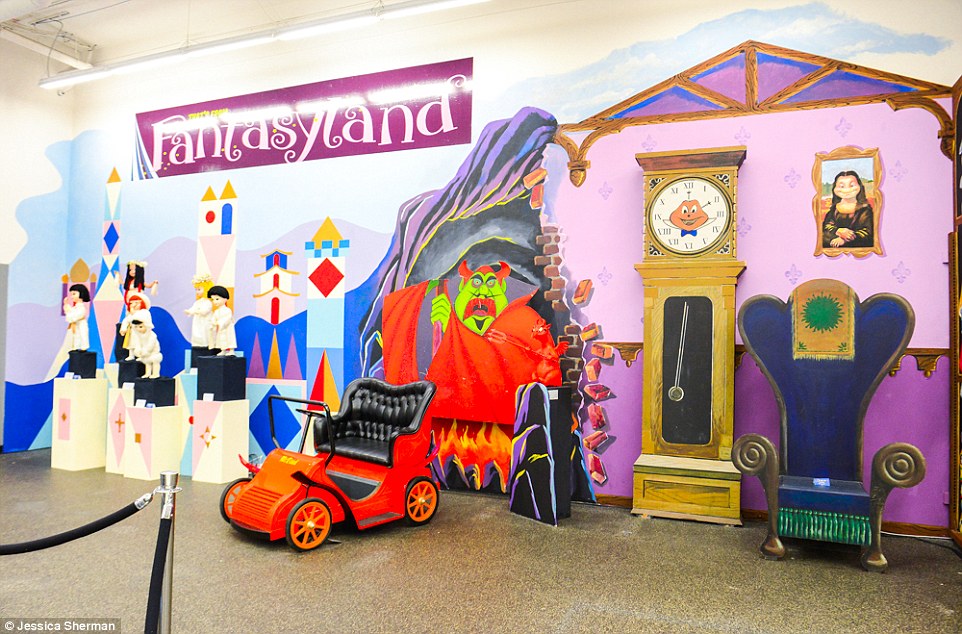