But they never materialised – thanks to the resort putting crowd control measures in place.

However, it seems they’ve worked almost too well because the park has been described by visitors on Twitter over the past few weeks as being ’empty’ and ‘a ghost town’.

‘Jodie with an IE’ tweeted on June 27: ‘By Disneyland standards, this place is a ghost town.’

Trevor Okazaki tweeted on July 8: ‘At Disneyland, piloted the Millennium Falcon. Walked around a lot, park is pretty empty.’

While on July 7, Matthew Arevalo added: ‘Another day at (a pretty empty and with no wait to enter Galaxy’s Edge) Disneyland.’

One of the queue-busting measures Disney implemented was to only allow guests with a reservation to enter Galaxy’s Edge, though this rule ceased to be after June 23.

Secondly, annual passes for the park have been blocked out for June, July and August. There are one million annual pass holders.

And lastly, Disney has been working on coping with increased capacity at the park by examining its infrastructure and trying to improve traffic flow and access.

Measures have included widening paths and removing objects such as planters and food carts. 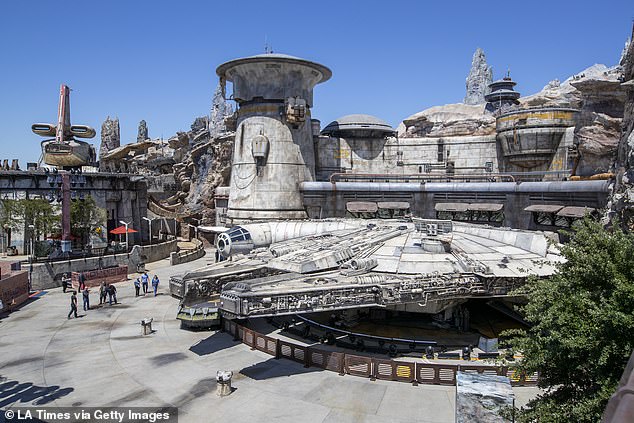 It has been reported that most guests at Disneyland are heading to the new Galaxy’s Edge land, pictured, rather than touring other areas of the theme park

In addition, reports The OC Register, most guests are heading to the new Galaxy’s Edge land rather than touring other areas of the park.

Disneyland doesn’t seem too fussed about the apparent lack of visitors, though.

It told The OC Register: ‘We are incredibly focused on delivering a great guest experience for the opening of Star Wars: Galaxy’s Edge.

‘This land has added 20 per cent more capacity to Disneyland Park, and together with all of our new offerings, advanced planning and innovative technology, has resulted in incredible feedback and satisfaction from our guests.’