By Fiona Macrae for the Daily Mail

An eye implant smaller than a grain of sand could revolutionise the treatment of glaucoma, a condition that affects 500,000 Britons and is a leading cause of blindness.

However, more than seven in ten patients fail to use their drops properly — reducing the drug’s benefit — while others struggle with side-effects.

An eye implant smaller than a grain of sand could revolutionise the treatment of glaucoma, stock photo of a senior woman’s eye

It is hoped the implant will improve treatment and slow down progression of the disease.

In glaucoma, there is damage to the optic nerve (which sends information from the eye to the brain for processing into images), leading to a loss of vision.

Most common in people in their 70s and 80s, it is usually caused by fluid building up in the front part of the eye, due to either too much of it being made or it not draining away properly.

This increases the pressure in the eye and squeezes the optic nerve, killing some of the fibres it needs to transmit information to the brain. 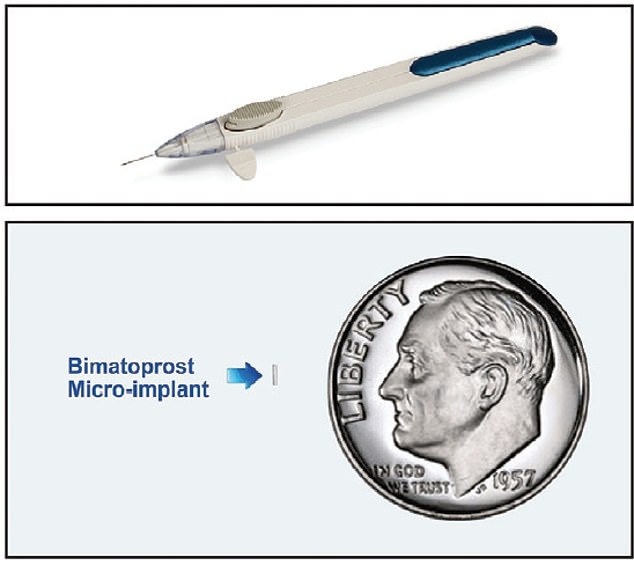 The new Durysta implant, made by Allergan, is loaded into a pen-like applicator (top) before being injected just below the cornea, the eye’s protective outer layer, by a doctor

Evening exercise could help with glaucoma

Exercising in the evening could help with glaucoma. A study of the fitness habits of almost 100 people with the condition showed being active between 6pm and 8pm — but not earlier in the day — cut the odds of glaucoma worsening by 15 per cent. Exercise is known to reduce the abnormally high pressure in the eye responsible for the vision loss of glaucoma, and a quirk of the body clock may mean the effect is greatest later in the day, say the researchers in the journal Eye and Vision.

The damage can’t be reversed, but treatment to lower the pressure can slow or prevent further loss of vision.

Eye drops are the mainstay of treatment and need to be administered up to four times a day. They lower the pressure by reducing the amount of fluid the eye makes, or by making it easier to drain away.

However, a 2017 study from the University of Sao Paulo in Brazil, in which people with glaucoma were watched as they put in their drops, found that 72 per cent struggled to administer them properly.

Other research has shown that many people simply forget to put in their drops or don’t take them because of side-effects such as eye irritation.

The new Durysta implant, made by Allergan, is loaded into a pen-like applicator before being injected just below the cornea, the eye’s protective outer layer, by a doctor. Nestled against the iris, the coloured part of the eye, the implant slowly dissolves over time, releasing bimatoprost as it does so.

Bimatoprost works by mimicking the activity of prostaglandins, naturally-occurring compounds that help fluid drain out of the eye.

In two trials involving more than 1,100 patients, the implant cut the pressure inside the eye by up to a third over three months — similar to regular eye drops. Side-effects included blurred vision, eye pain and headaches. In rare cases, the implant can damage the cornea, leading to permanent loss of vision. 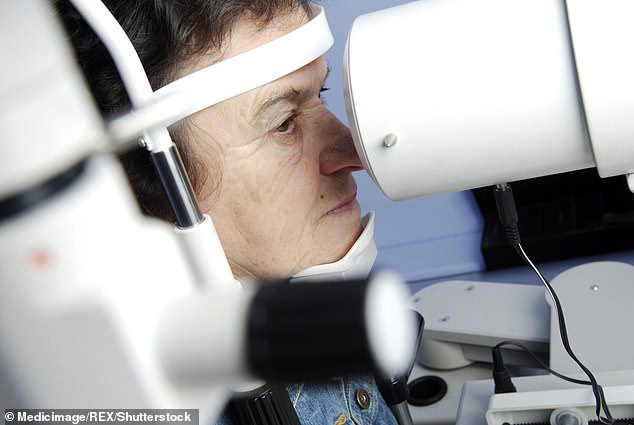 Bimatoprost works by mimicking the activity of prostaglandins, naturally-occurring compounds that help fluid drain out of the eye. Pictured: A woman has her eyes tested (stock)

The implant’s benefits last around eight months. A patient can currently only have one fitted, but it is hoped that, in future, they will be able to have replacements when needed. The device was cleared for use in the U.S. earlier this year and Allergan plans to apply for approval in the UK soon.

‘Anything that makes it easier for people to manage glaucoma is a good thing,’ says Daniel Hardiman-McCartney, clinical adviser for the College of Optometrists.

‘Implants are a possible option, but recent research suggests that a pressure-lowering laser treatment called selective laser trabeculoplasty may be even more helpful.’