Dawn Powell had bought two cots, two sets of babygrows, two sets of bedding. But just one of her much- loved baby twins came home from hospital after their birth.

Archie and Evalene were delivered in February this year, but Archie died at just four days old from a common bacterial infection — Group B Streptococcus, commonly known as strep B.

What adds to Dawn’s distress is the fact that this bacterium is carried by one in five women — yet no one alerted her to the danger during her pregnancy.

Dawn Powell, 41, (pictured with husband Kevin and daughter Evalene) gave birth to two twins but just one of her much- loved baby twins came home from hospital after their birth

Found in the genital tract and bowel of both men and women, strep B is normally harmless, but can become dangerous if transferred from a mother to her baby during labour, as newborns have more vulnerable immune systems.

Since 2000, the UK has seen the infection rate in babies under three months rise by almost a third.

One in 1,750 British newborns develops a strep B infection and one in 14 of those is left with a long-term disability such as vision or hearing loss, learning difficulties, and seizures, while every week one baby will die.

But now, a new trial — the first in the world — is under way to prevent strep B infections in babies.

The £2.8million study will involve researchers from the Universities of Nottingham, Warwick, Lancaster and City of London with support from the National Childbirth Trust and charity Group B Strep Support. 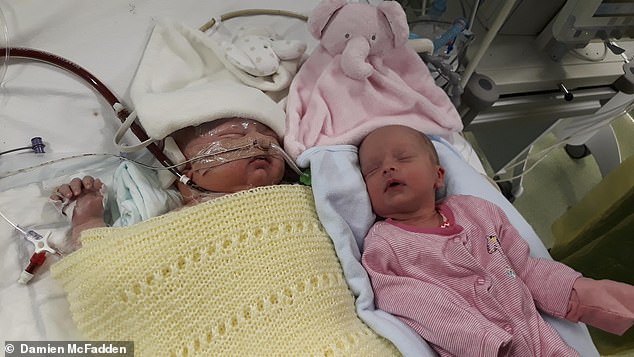 Archie (left) and Evalene (right) were delivered in February this year, but Archie died at just four days old from a common bacterial infection — Group B Streptococcus, commonly known as strep B

The year-long study will look at two tests to identify strep B infection in late pregnancy or labour, and will involve offering them to women whether or not they have risk factors.

Currently, only those with risk factors such as having been a carrier of strep B in the past, or showing symptoms such as fever during labour, are tested or treated.

Dawn, 41 who lives in Margate, Kent, had no risk factors. Already a mother to Kienna, 11, Aralyn, nine, and Lyara, seven, she’d never been told she carried strep B and had not had any problems in previous deliveries.

When she and her husband Kevin, 51, a self-employed salesman, discovered they were having twins and that one would be a boy, they were thrilled.

‘With three older sisters and a new baby girl on the way, a boy would even things out in our family,’ Dawn recalls. ‘We were so happy.’ 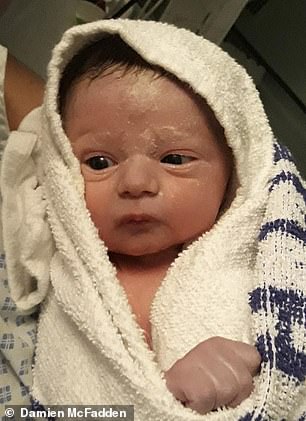 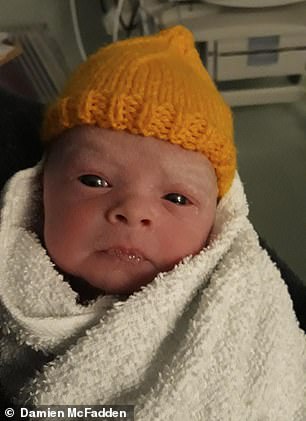 What adds to Dawn’s distress is the fact that this bacterium is carried by one in five women — yet no one alerted her to the danger during her pregnancy. Pictured is Archie in hospital

Archie was born first at 37 weeks, the larger twin at just over 6lb. Evalene followed, weighing just over 5lb. ‘Both seemed well — in fact, Archie cried and seemed healthy but Evalene needed a rub to get going,’ she recalls.

Minutes after birth, Dawn noticed Archie was grunting. ‘A midwife joked that he was singing,’ she says.

But within hours, Archie’s blood sugar levels and temperature dropped. He was placed in the special care baby unit and a consultant told Dawn they were investigating a possible perforated bowel. The consultant showed Dawn a blotchy area on Archie’s stomach and noticed he became irritated if this area was touched.

She says: ‘After more than 12 hours, a specialist came over and said it was very grave: Archie might not last the night. I was petrified.’ 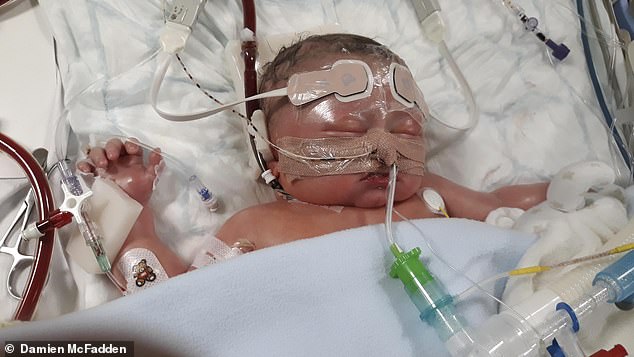 Archie (pictured) was born first at 37 weeks, the larger twin at just over 6lb. Evalene followed, weighing just over 5lb. ‘Both seemed well — in fact, Archie cried and seemed healthy but Evalene needed a rub to get going,’ she recalls

Archie was transferred to the Evelina Children’s Hospital two hours away in London. There, he had blood tests and a consultant sat Dawn down. ‘She told me Archie had strep B he’d contracted from me during delivery. No one really explained what it meant and I had no idea I could be a carrier as I was never tested.’

Evalene, in contrast, had not reacted to the bacterium — Dawn was told that this could be because Archie was born first, while Evalene had still been protected in her separate amniotic sac.

Dawn sat at Archie’s incubator. ‘At one point he opened his eyes and squeezed my hand,’ she says. ‘I was hopeful for a second. Then he closed his eyes. He didn’t open them again.’

The consultants had done a CT scan and found a clot on Archie’s brain. If he survived, he would be deaf, blind, unable to eat or communicate.

‘Kevin and I talked,’ says Dawn. ‘It was a heart-breaking decision but we decided it was not fair to make Archie suffer. We decided to turn off the life support.’

Yet a simple swab during pregnancy could have shown Dawn was carrying the bacterium, and antibiotics given to her before labour could have protected her son. 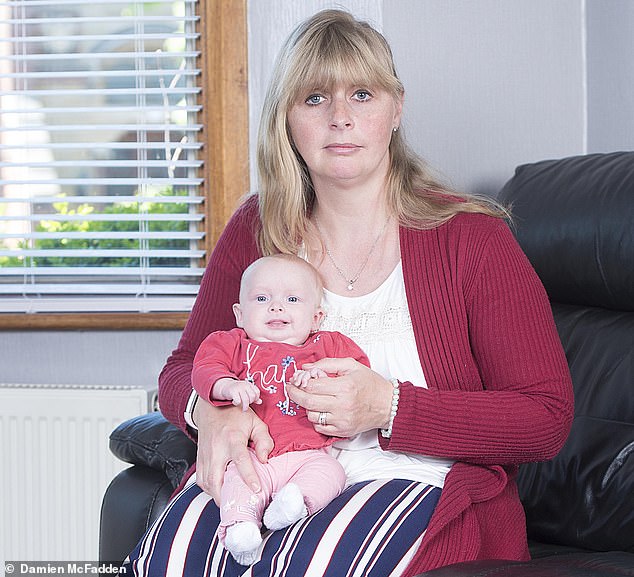 Evalene, in contrast, had not reacted to the bacterium — Dawn was told that this could be because Archie was born first, while Evalene had still been protected in her separate amniotic sac

Professor Andrew Shennan, clinical director of Tommy’s prematurity clinic, says: ‘In the vast majority of cases the baby does not have strep B infection until the mother’s waters break — before this there is a membrane around the baby to protect it from bacteria. At the time of delivery, lots of bacteria get on the baby and it’s then that they can succumb.’

Philip Steer, an emeritus professor of obstetrics at Imperial College London, believes all women should be offered a test for strep B, but whether to take it should be voluntary.

The new trial involves 80 maternity units. Half will be managed as now, with women not offered testing. The other half will be offered testing at 35 to 37 weeks or tested as soon as they are in labour. Professor Steer explains: ‘Then we can see if there is a significant difference in the number of babies becoming ill in the three groups.

‘This is the first trial in the world to test the hypothesis that antibiotics are effective and will hopefully answer the sceptics once and for all.’

He also believes that far from costing the NHS too much, a test for strep B infection is ‘cheap’. In 2017, the Government’s UK national screening committee rejected a programme to swab all pregnant women for strep B on the grounds it was not ‘cost-effective’.

‘It costs £12 per test — compared to the thousands of pounds per day needed to keep babies in neonatal intensive care,’ says Professor Steer. ‘Papers in The BMJ looking at cost-effectiveness in strep B infection testing found that the cheapest thing to do would be to give penicillin to every woman in labour.

‘At worst, it’s cost-neutral to test all women and the cost of babies that are sick is much greater,’ he says. ‘By the time there are signs strep B infection is present in a baby it’s often too late.’

Professor Shennan says signs in newborns can include being ‘floppy, moribund and not behaving normally — if the bacteria is in the lungs the baby might show trouble breathing’.

He adds: ‘These changes can happen in a matter of hours. Mothers, conversely, usually show no symptoms.’

Professor Steer says the reluctance to treat all pregnant women with precautionary penicillin is linked to antibiotic overuse and concerns it could affect the microbiome (balance of bacteria) in a baby’s bowel.

‘But penicillin is the best antibiotic for strep B infection and it’s narrow-spectrum — it has fewer negative effects on the gut and does not promote resistance to other bacteria,’ he says. ‘Bugs that can develop resistance to penicillin are likely to have already done so as we have used penicillin longer than any other antibiotic, so it is unlikely to cause extra resistance.

‘In any case, if a baby’s bowel bacteria is changed it is usually back to normal by six weeks.’

Dawn was not given that option. ‘Archie’s notes said he was given some antibiotics but it was in the hours after birth so not in time,’ she says. ‘Also he was sedated because he seemed distressed, so was no longer ‘grunting’ and so wasn’t displaying unusual behaviour that would have stood out to doctors.’

Professor Shennan says some women believe they might need a caesarean to prevent the transfer of bugs but he says this is not necessary if antibiotics are used. ‘Strep B infection is weak to treatment,’ he says. ‘It’s easily and effectively treated by simple antibiotics such as penicillin.