Turtles smothered in black oil were discovered washed up on a Brazilian beaches as pools of a petrol-based substance are seen scattered across the sand.

One sea turtle was found smothered in black oil on the Praia de Alcantara beach in the state of Maranhao.

Another clip shows a dead turtle which was found on a beach on the island of Ilha dos Poldros in the state of Piaui.

The person recording rubs their finger on its shell to show the thick layer of black oil. 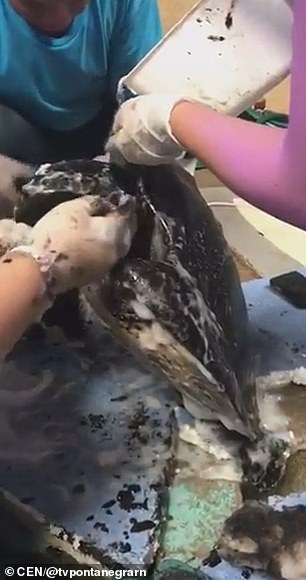 An olive ridley sea turtle is washed down by rescuers at the Natal Aquarium, Paraiba, after it was found covered in black oil on Redinha beach in the state of Rio Grande do Norte. Rescuers pour some water over the turtle to sponge off the sticky film of oil

A final video shows an olive ridley sea turtle, know as Lepidochelys olivacea, which was found covered in oil on the Redinha beach in the state of Rio Grande do Norte.

Rescuers took the reptile to the Natal Aquarium, Paraiba, where they attempt to scrub off the thick layer of black residue. The turtle is reportedly still in treatment at the aquarium.

The bizarre occurrences have taken place on 39 beaches across north-eastern Brazil and the Ministry of the Environment are now investigating the appearance of the black spots. 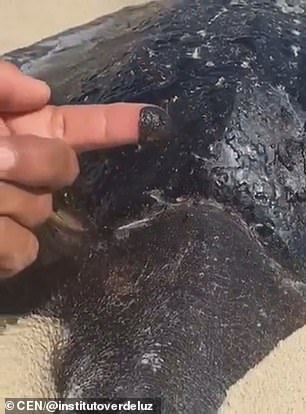 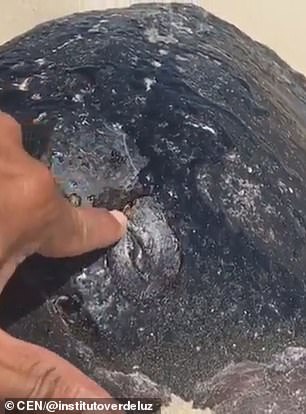 A dead turtle was found on a beach on the island of Ilha dos Poldros in the state of Piau. The person filming shows the thickness of the oil which has coated the turtle. The black layer of oil coats the shell of the turtle as it lies motionless on the beach

Images show the oil-like substance on the sands of the Praia do Paracuru beach in the state of Ceara and local media report the Ministry of the Environment have analysed some of the substance and found it is hydrocarbon derived from petroleum.

The substance has reportedly been appearing on beaches in the area since the beginning of September and reports state at least six reptiles have been found affected by the substance.

The Ministry of the Environment are reportedly still searching for the origin of the substance and they are still analysing it to help the investigation. 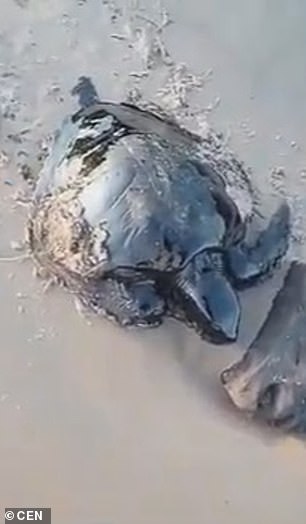 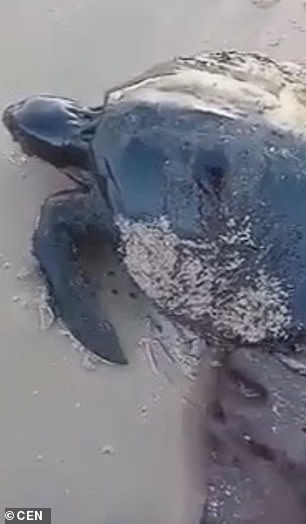 A turtle is washed up and covered in sand and oil on the Alcantara beach in the state of Maranhao (left). The turtle attempts to crawl through the sand to return to the sea (right)

According to the Brazilian Institute of the Environment and Renewable Natural Resources (IBAMA), the institution’s teams have been collecting and analysing the material to identify who is responsible for the appearance of the oil.

If it is found the oil was dumped by a boat, it is considered an environmental crime and can be punished by a fine of up to 50 million BRL, equivalent to £9.6 million.