Distressing moment autistic teenager, 14, is bashed by thugs who mistook him for a different person

A autistic teenager has been brutally bashed by a gang of older boys who mistook him for a completely different person.

Jake, 14, was surrounded by three older men as he stood at an ATM in a Caroline Springs shopping centre, about 20km west of Melbourne’s CBD.

In distressing video of the altercation the teenager is pushed against a wall before one of the boys sends him sprawling onto the ground.

The trio continue to unleash a series of brutal kicks and punches as the 14-year-old puts his hands above his head in an effort to defend himself.

His devastated mother told 3AW radio her son was left bruised and battered from the attack and had mentally declined ‘quite badly’.

‘He’s not in a very good spot at all, he’s quite traumatised,’ she said.

‘As you could see in the footage he was stomped on the head, on the face and on the shoulder quite violently and viciously.’

Jake’s mother agreed with host Neil Mitchell the attackers had appeared unfazed launching such a brutal attack in front of dozens of witnesses.

She said her son had been on the way to the gym with a friend when the group approached him and asked if he knew ‘Harry’.

‘My son doesn’t know personally or associate with either of those three guys in the footage or the person that they mentioned,’ she explained.

The distressed family were later told the aforementioned Harry had had a verbal disagreement with an unknown man.

The argument prompted Harry to send the three men in the footage to attack the person he had argued with as a form of payback.

Her son Jake unfortunately copped the vile beating meant for another victim. 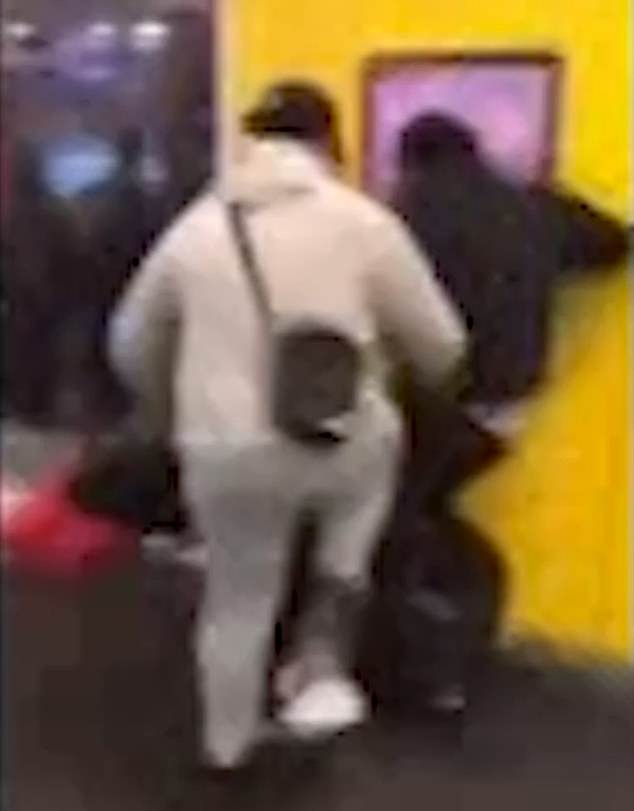 ‘It sounds like it was a case of mistaken identity,’ the radio host suggested.

‘The poor kid is a victim, a total victim’.

Jake’s mother said gang violence was a huge issue in her area and called for interventions such as police patrols to bring teenagers into line.

‘People are getting seriously hurt, children are being permanently disabled or killed, the impact it has on families is traumatising,’ she said.

She confirmed Caroline Springs Police Station were investigating the unprovoked attack on her son.