A Pennsylvania District Attorney has spoken out against a jury’s decision to acquit a white former police officer of homicide, after he shot and killed an unarmed black teenager as he fled from a traffic stop.

In a press conference on Friday night, DA Stephen Zappala Jr. said he believes the jury were wrong in letting Michael Rosfeld walk from the Allegheny County Courthouse free from any charges.

But Zappala said he also understands it’s everyday citizens who ultimately decide guilt in criminal cases, and ‘they have spoken’.

‘I have always believed that the criminal justice system belongs to the people and the best example of that is when 12 men and women sit in a room and deliberate how best to pass judgement onto one of their peers,’ Zappala said

‘While I respectfully disagree with their verdict, it is the people of this commonwealth who decide guilty or not guilty and they have spoken in this matter.’

He added, that in the interests of justice, he’ll continue to bring about charges against Rosfeld, where charges are deemed appropriate.

DA Stephen Zappala Jr. (above) said he disagreed with the jury’s decision to acquit Rosfeld, but said he respects the decision 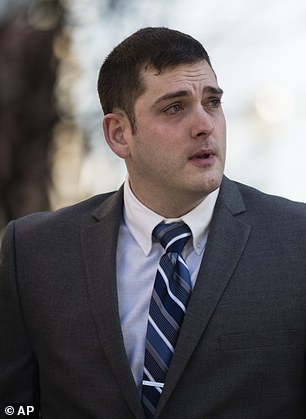 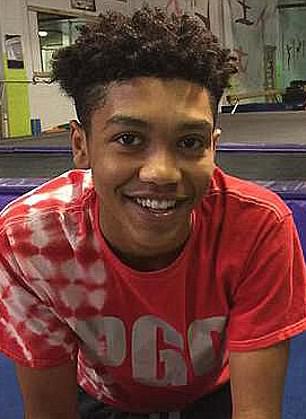 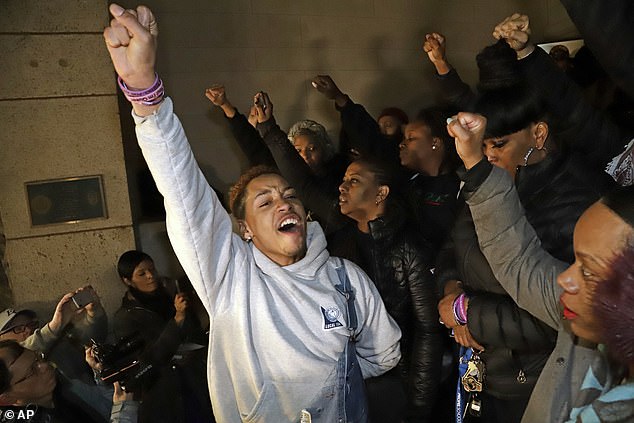 Supporters of Antwon Rose II, stand on the steps of Allegheny County Courthouse after hearing the verdict of not guilty on all charges for Michael Rosfeld 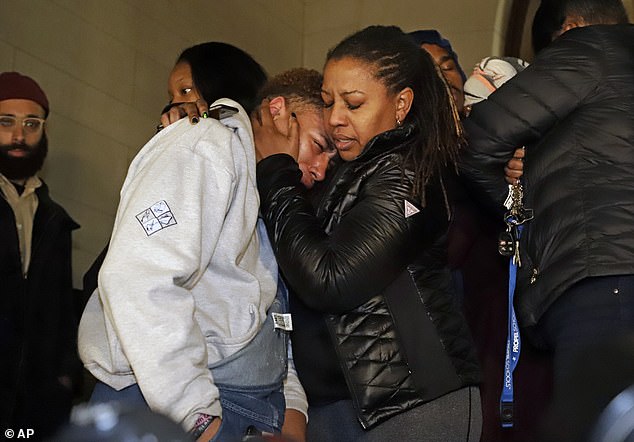 Supporters of Antwon hug as they leave the courthouse. The protester in gray above read aloud a poem Rose had written two years earlier. Part of it said: ‘I am not what you think. I am confused and afraid. I wonder what path I will take’ 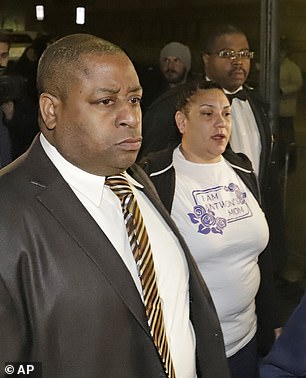 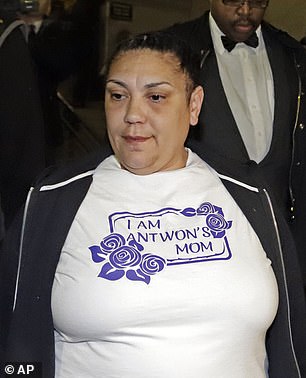 Michelle Kenney, the mother of Antwon Rose II, leaves the Allegheny County Courthouse with supporters after hearing the verdict of not guilty on all charges for Rosfeld

The jury deliberated for less than four hours on March 22, before clearing ex-East Pittsburgh police officer Rosfeld of homicide in the shooting of Antwon Rose II, in 2018.

‘I hope that man never sleeps at night,’ Rose’s mother, Michelle Kenney, said of Rosfeld, according to the Pittsburgh Post-Gazette. ‘I hope he gets as much sleep as I do, which is none.’

The verdict leaves Rose’s family to pursue the federal civil rights lawsuit they filed last August against Rosfeld and East Pittsburgh, a small municipality about 10 miles from downtown Pittsburgh.

Rose was riding in an unlicensed taxi that had been involved in a drive-by shooting when Rosfeld pulled the car over and shot the 17-year-old in the back, arm and side of the face as he ran away.

Rosfeld’s lawyer referred to his client as ‘a good man’, adding that he feared for his life in the moments leading up to the shooting and had to make a split-second decision. 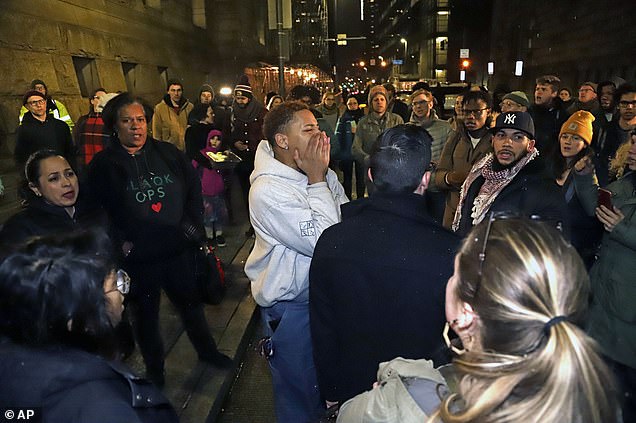 Rosfeld’s wife burst out sobbing as the verdict was announced. She and Rosfeld were hustled out of the courtroom by deputies. Antwon’s supporters are seen above 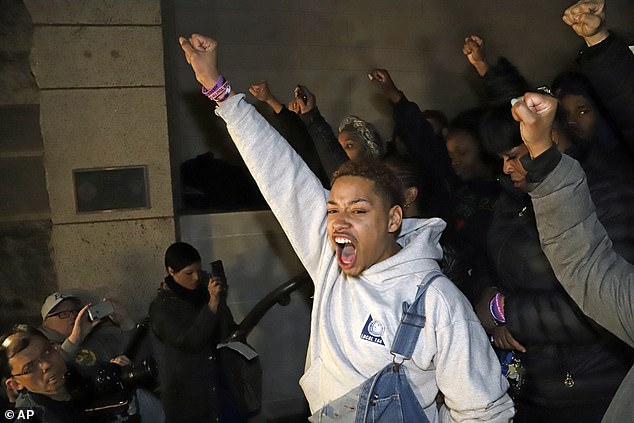 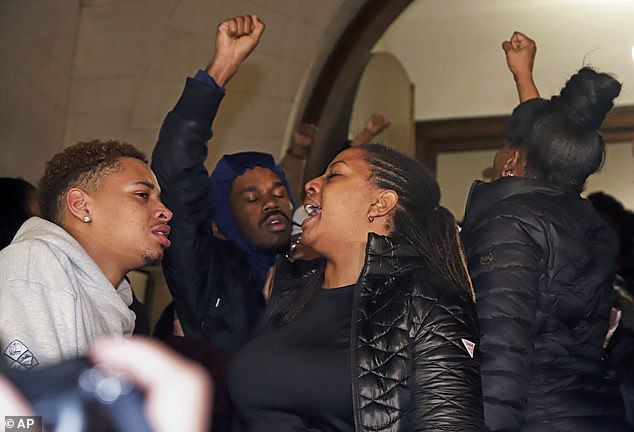 Rose’s family remained stoic after the verdict was delivered. His sister Kyra Jamison had tears streaming down her face and her mother Kenney urged her not to cry.

Kenney said she was upset but unsurprised by the verdict, given other cases in which police officers have either avoided charges or won acquittals in similar shootings.

‘It isn’t what I hoped for, but it’s what I expected,’ she said, adding she feels her son ended up dead because he was black. 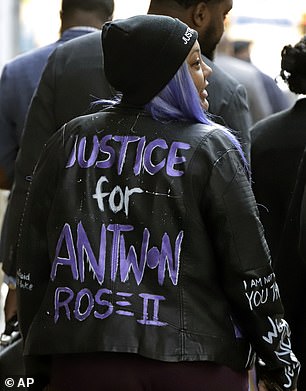 There were tears and gasps from black people gathered in an overflow courtroom, and several broke out in song: ‘Antwon Rose was a freedom fighter, and he taught us how to fight.’

Rosfeld’s wife burst out sobbing as the verdict was announced. She and Rosfeld were hustled out of the courtroom by deputies.

The reaction was measured after Friday night’s verdict, with a small group of chanting protesters gathering outside the Allegheny County Courthouse briefly blocking intersections and entering hotels. Pittsburgh police tweeted the ‘peaceful demonstration’ had resulted in rolling, temporary road closures.

One protester read aloud a poem Rose had written two years earlier. Part of it said: ‘I hear that there’s only two ways out. I see mothers bury their sons. I want my mom to never feel that pain. I am confused and afraid.’

The Woodlands Hills School District had released the poem after his death at the request of Antwon’s mother Kenney.

The crowd then started chanting ‘it is our duty to fight for our freedom’. Other chants included ‘no Justice, no peace’ and ‘three shots in the back. How you justify that?’ 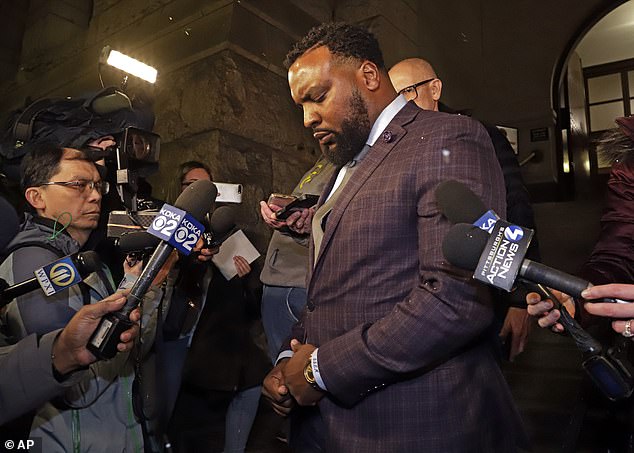 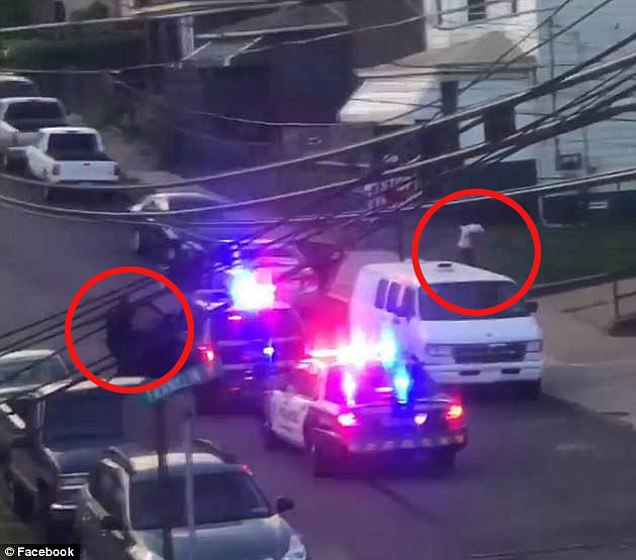 Footage of the moment Michael Rosfeld shot dead unarmed black 17-year-old Antwon Rose II as he fled a traffic stop last June was shown to the jury at the former East Pittsburgh police officer’s trial on Tuesday. Rosfeld is circled left and Rose is circled right

The Rose family’s attorney, S. Lee Merritt, had urged a murder conviction, saying before closing arguments that it’s ‘pretty obvious’ Rose was not a threat to Rosfeld.

Rose’s death – one of many high-profile killings of black men and teens by white police officers in recent years – spurred protests in the Pittsburgh area last year, including a late-night march that shut down a major highway.

On Friday, Assistant District Attorney Jonathan Fodi declared in his closing argument that Rosfeld had acted as ‘judge, jury and executioner’.

As Jobe returned to the stand Friday for cross-examination, the judge lifted a gag order he imposed on parties in the case at the request of the defense.

Defense attorney Patrick Thomassey said while he and prosecutors have abided by the judge’s order, the attorney for Rose’s family has not.

On Wednesday, S. Lee Merritt released a letter to the media that Rose’s mother wrote to prosecutors urging them to show what a ‘kind, loving and funny’ person her son was. 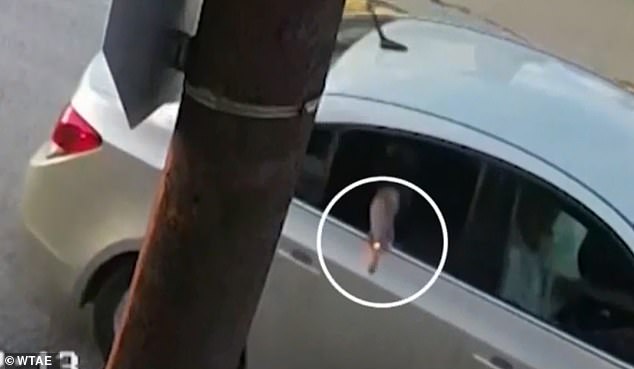 Video from the drive-by shooting that preceded the fatal traffic stop shows 18-year-old Zaijuan Hester extending his gun out of the window of the gold Chevrolet Cruze and firing. Rose’s silhouette can be made out in the front seat

Rosfeld testified Thursday he thought Rose or another passenger in the car had pointed a weapon at him, and he fired in self-defense. But it turned out that neither teen had a gun at the time.

‘It happened very quickly,’ said Rosfeld, who took the stand in his own defense.

Rosfeld got choked up and dabbed away tears as he recounted finding the mortally wounded Rose on the ground.

‘I was upset, shocked,’ he said. ‘He was moaning, trying to breathe.’

Rose had been riding in the front seat of the cab when another occupant, Zaijuan Hester, in the backseat, rolled down a window and shot at two men on the street, hitting one in the abdomen.

A few minutes later, Rosfeld spotted their car, which had its rear windshield shot out, and pulled it over.

Hester, 18, pleaded guilty last week to aggravated assault and firearms violations. Hester told a judge that he, not Rose, did the shooting.