Images of a calf confined in a tiny hutch and a hobbling, apparently emaciated, cow have emerged in disturbing dairy farm footage taken by an animal rights group.

The first picture of a calf in a pen barely big enough to contain it suggests it is being reared in conditions that could breach welfare rules.

The second distressing image, from a different nearby farm, shows the injured cow – with bones poking through its skin – struggling to walk.

A calf at Halswell Farm in south Devon, apparently emaciated with an injured back leg making it barely able to walk 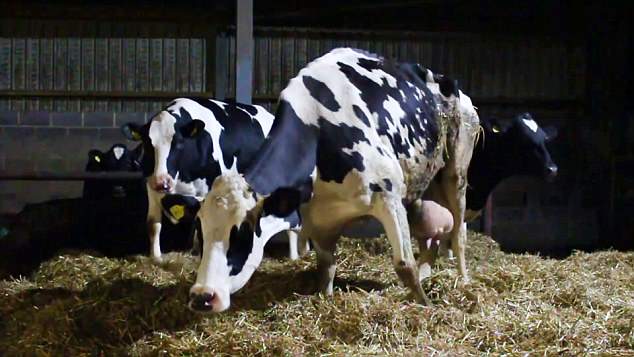 A cow at the farm hobbles around with its head lowered, seemingly injured

The latter is among hundreds of farms that supply milk to supermarkets and for many top brands.

Some cows on both farms have their rear legs shackled together to prevent them from splaying, causing serious injury, when delivering calves.

The footage was taken by campaigning group Viva, which is opposed to the consumption of meat and dairy products.

It claims the scenes are typical of modern dairy farming.

The organisation says the cows are bred to be ‘udders on legs’ and claims many suffer problems with their legs and feet as well as udder infections.

Fairfield Farm, in south Devon, is home to a herd of Guernsey cows.

The couple’s website says: ‘We are passionate about what we do and strive to create the most delicious ice cream and Guernsey beef.’

At the farm, Viva found what the industry calls a ‘downer’ cow – a cow may ‘go down’ due to temporary nerve paralysis caused by calving difficulties or fatigue.

Viva director Juliet Gellatley said: ‘On a wet, filthy concrete floor we came across a cow who was so ill she couldn’t move, not even lift her head. 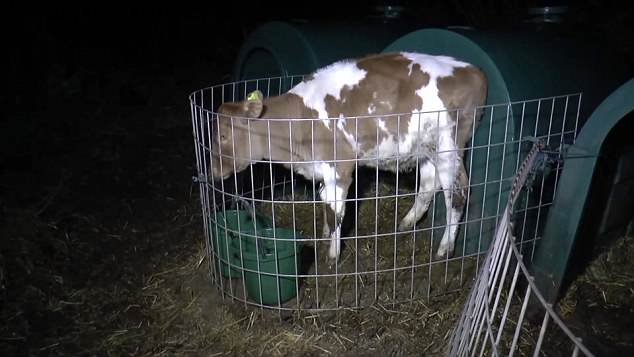 Images from Fairfield Farm in south Devon, which showed some calves in small hutches – each one surrounded by a metal fence

Her body was wasting away and revealed large sores… We called the RSPCA and a local vet who… agreed with us that this poor creature was suffering and used his authority to put her out of her misery.’

The vet, Howard Liebermann, said: ‘She was really dull and unable to rise and certainly she’s not on great bedding. There was quite a lot of bruising around and suffering.’

Footage also showed calves in small hutches, each one surrounded by a metal fence.

Farmers can take newborn calves from their mothers to these hutches for the first eight weeks of their lives.

But Viva said ear-tag data suggested these calves were 16 weeks old and too big for the hutches, breaching welfare rules.

A few miles away in south Devon is Halswell Farm, part of the Arla dairy organisation.

It is the UK’s second largest dairy firm supplying milk to supermarkets and owns popular brands such as Cravendale and Anchor butter.

At Halswell, Viva found an old, apparently emaciated cow with an injured back leg that was barely able to walk.

Viva has complained about both farms to the watchdog for farm animal welfare, the Animal & Plant Health Agency.

But the Carpenter family’s solicitors, Clarke Willmott, said a vet had examined its cows on April 19.

It said ‘no animal welfare issues were identified’. And it described the claims as ‘vague’ and ‘inaccurate’, denying cows were emaciated.

Arla issued a statement on behalf of itself and Halswell Farm, which is part of the Red Tractor scheme, which means it is independently inspected.

It said: ‘Over 2,400 farmers are part of the farmer-owned Arla Foods. This footage is not representative of their farming methods or their approach to animal welfare.’

It added: ‘This farm was visited by an independent vet and Red Tractor and there were no immediate welfare concerns from either independent party.’

Michael Oakes, of the National Farmers Union, said: ‘The reality is animals, just like humans, can occasionally receive injuries or be treated for different conditions. British dairy farmers operate to some of the highest standards in the world…’