Shocking footage has emerged of a man confronting a woman before allegedly attacking her in a Sydney cafe after an road rage incident.

Police have released CCTV as part of their ongoing investigations in the hope witnesses may come forward and assist with their inquiries.

Cops were called to Wattle Street, Ultimo around 1.45pm on Sunday February 14  following reports a woman had been assaulted.

Police allege a man followed a woman into a Sydney cafe after a road rage incident (pictured, a man who can assist with inquiries)

Officers were told the woman was crossing a road when the driver of a black SUV beeped the horn and hurled verbal abuse at her.

It’s alleged the man followed her into a nearby café where he assaulted her before throwing her bike into the street and smashing her mobile phone.

CCTV shows a man wearing a black T-shirt, pants and sunglasses walking into a cafe, with police believing he may be able to assist with inquiries. 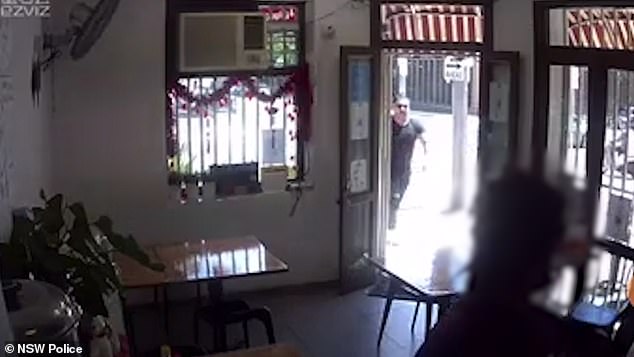 Police alleged the man verbally abused the woman before following her into the Ultimo cafe (pictured, a man police are seeking to help with inquiries)

The woman, 37, suffered minor injuries to her wrists and hands during the alleged assault.

Sydney City Police Area Command have launched an investigation into the circumstances surrounding the incident. 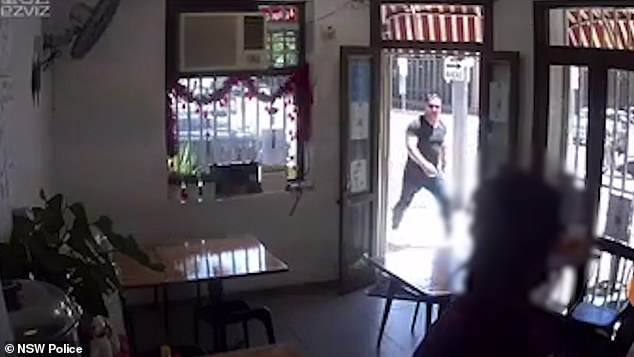