Should you be interested in learning more about diving then please visit Diving Picks for the latest information and guides on how to do it safely. The sparkling blue ocean, the shoals of tiny, bright fishes, the corals like flowers in a spectacular garden… so it’s hard to imagine it might once have been populated with wallabies and kangaroos.

Twenty thousand years ago, what is now the Great Barrier Reef off the Queensland coast in north-eastern Australia would have been limestone cliffs with green pasture and animal grazing.

As the Ice Age receded and sea levels rose, the Aborigines, wallabies, and kangaroos retreated to present-day mainland Australia and, over time in perfect conditions, corals began to grow on the submerged rocks.

So the reef’s very existence is nature’s response to challenging conditions.

But when Welsh naturalist Iolo Williams traveled there in January 2017 to make a BBC4 documentary about its wonders, scientific doomsayers had led him to fear that this first visit to a reef that was tragically dying might also be his last. 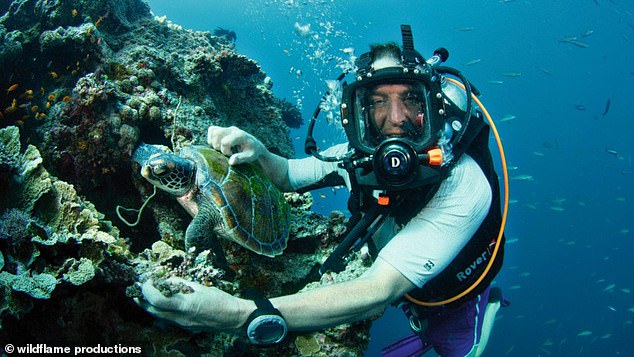 Aerial surveys of a ‘bleaching event’ in 2016 – when rising water temperatures cause corals to expel the algae within, turning the coral white – showed that over 50 percent of the reef was severely affected and almost 500 individual reefs were badly stressed.

For, despite its name, the Great Barrier Reef isn’t one long stretch of coral; there are more than 3,000 reefs distributed over an area of 133,000 square miles.

For Iolo, diving here was a boyhood dream come true. ‘It had been an ambition since I was a small child watching those old black-and-white Cousteau programs,’ he says.

‘But I wasn’t sure what I was going to find. I was hoping to find living reefs, some of what Cousteau and David Attenborough described decades ago – which I did, fortunately, but I also found sections that were completely dead.’

The Great Barrier Reef is the biggest living organism on earth, the only one visible from space.

It’s home to 1,500 species of fish, six species of turtles, and 17 species of sea snakes. And at first, it seems that cautious optimism is justified.

‘It’s like swimming in the biggest and best aquarium you’ve ever seen,’ Iolo recalls.

He made 21 dives over three weeks. On one reef, he swam with a friendly green turtle and scratched algae from its shell. He went night-diving with sharks.

‘That’s when they’re hunting. They’re fabulous animals. But I confess in my mind all I could hear was the theme to Jaws!’ At night, he reminisces, coral reefs are particularly beautiful; the colors somehow more intense in the torchlight.

There are 600 types of coral: soft corals, like sea fans that grow at right angles to trap plankton; boulder corals that can grow to the size of a small car, over hundreds of years; and staghorn coral that grows up to 10cm a year.

Embedded in the coral you might find Christmas tree worms – like colorful fir trees. A single anemone (a close cousin of coral) could house a colony of gender-fluid anemonefish; when the dominant female dies, the biggest male changes sex to take her place. 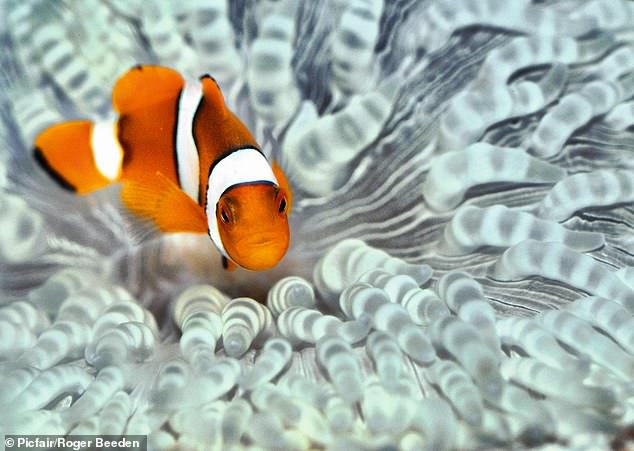 If you’re wondering what it’s like to swim with one of the world’s most dangerous sea snakes – the olive sea snake – well, Iolo says that you’d have to really, really annoy it before it would bite.

(Producer Steffan Morgan, less sanguine, stresses that there were antidotes on board the backup vessel and an air-lift system on call just in case.)

At least at the outer limits of the Barrier Reef, the delicate eco-system seemed to be thriving and the ocean was thronged with thousands of fish. But on another reef, bleached coral told a different story.

‘It’s like looking at a coral graveyard,’ gasps Iolo. ‘Vast areas are white. The water temperature has increased too much, forcing the algae out of the coral, leaving the bleached white skeleton.’

Shockingly, Iolo encountered only eight fish. ‘Eight fish!’ he exclaims, appalled. ‘Can you imagine? On a coral reef!

‘A further rise in water temperature of only one degree will almost certainly result in the loss of everything I’ve seen – within this century!’

Here, closer to the coast, the coral is more vulnerable.

But mangroves can’t filter out pesticides from the local sugar-cane agriculture; increased nitrogen levels in the water lead to plagues of crown-of-thorns starfish that prey upon the coral faster than it can regenerate.

However, the reef can recover if conditions are right. In recent years, cyclones have blasted the outer reef, shattering the coral – and global warming means that they’re happening more frequently and with greater intensity.

But Iolo makes a heartening dive to the shipwrecked SS Yongala that sank in a cyclone in 1911.

Coral has formed on the wreck, creating a new reef. ‘It looks like this has been here for thousands of years but, in fact, cyclones regularly destroy it.

‘In a short time, the coral grows back, and wildlife returns,’ he explains. ‘This suggests that when conditions are right, even new reefs like this one can flourish.’

Wonders Of The Great Barrier Reef With Iolo Williams is on Wednesday at 9 pm on BBC4.