Dizzy spells but doctors don’t know what’s wrong? PPPD could be the reason

Empire state of shock: Robert Virag was stunned with sudden dizziness while in NYC

Walking back down from the top of the Empire State Building, Robert Virag, then 21, suddenly started to feel an intense rocking sensation, as if he was on a boat on choppy seas.

‘I’d had motion sickness in the past, but nothing like this; it was really scary,’ recalls Robert, a personal banker from Welling, Kent, who was on holiday with friends.

Outside, the ‘boat’ feeling persisted, along with a sensation that he was floating and felt unsteady on his feet.

‘I paid to see a doctor in New York, who was unable to diagnose me but prescribed Stemetil for the dizziness. It didn’t help much.’

Back in the UK a few days later, Robert saw his GP, who said it sounded like labyrinthitis — inflammation of the nerves in the inner ear — and that it would heal on its own within a few weeks.

In fact, it took five years to get the right diagnosis. Robert has a condition that was only classified last year, and is still unknown to many medical professionals.

Persistent postural-perceptual dizziness (PPPD) is a chronic syndrome where patients feel as though they are swaying despite being stationary, and feel unbalanced and at risk of falling.

It is caused by a problem in the inner ear, which plays a key role in our sense of balance. PPPD is thought to be triggered by something that previously made the patient dizzy. Usually this is another inner ear disorder, but it can also follow concussion, whiplash, or even a migraine that occurred with dizziness.

While normally a person’s sense of balance eventually recovers, for reasons that are unclear, others develop chronic problems.

Essentially, the brain fails to correctly deal with information on motion, explains Professor Peter Rea, an ENT consultant at Leicester Royal Infirmary and lead clinician at the Leicester Balance Clinic. He compares it to when you’re sitting in a train at a station and the train next to you pulls away, which makes you feel as if you are moving. 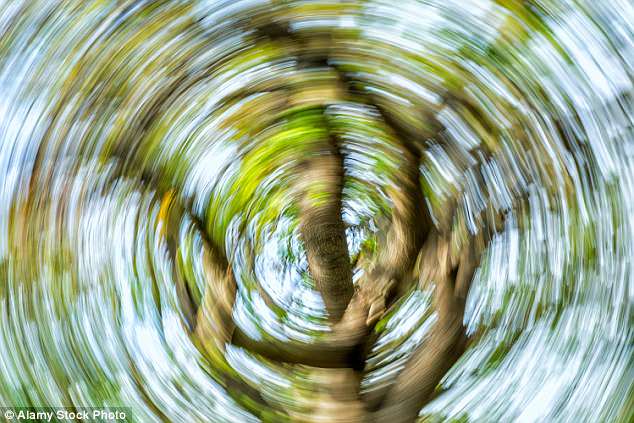 Persistent postural-perceptual dizziness (PPPD) is a chronic syndrome where patients feel as though they are swaying despite being stationary, and feel unbalanced and at risk of falling

This illusion happens because our sense of motion is based on two things — what we see, and also signals to our brain from the vestibular system in the inner ear, which monitors our body’s movement and helps control balance.

In the train example, the visual information — the other train moving away — momentarily overrides the other internal cues.

With persistent postural-perceptual dizziness this is happening all the time.

‘In PPPD, the brain incorrectly processes sensory information, and, as in the train example, is predicting motion when there isn’t any,’ says Professor Rea.

‘For some reason the brain becomes visually dominant, taking more guidance from what it is getting from the eyes than from inside the ear. People develop a fear of falling and this can also make them slow down, stiffen up so they get problems such as neck ache and feel anxious.’

Despite its recent classification, experts believe it is actually one of the most common vestibular (inner ear) disorders. According to research published in the journal Practical Neurology this year, it accounts for 10 per cent of patients in balance clinics.

PPPD is often misdiagnosed as other common inner ear disorders that cause dizziness, including labyrinthitis, which also causes hearing loss; vestibular neuritis, which is caused by a bacterial infection attacking the nerve in the inner ear; or benign paroxysmal positional vertigo (BPPV), when the crystals inside the inner ear that help with balance and body motion become displaced.

A key distinguishing feature is that rather than feeling as if things are spinning — as is common with other inner ear conditions — people feel as if they are swaying. Likewise, people with PPPD tend to find their symptoms disappear when they lie down.

Other symptoms include extreme tiredness, blurred vision, a ‘cotton wool’ feeling in the head and difficulty concentrating. The cause of Robert’s PPPD is unknown. While initially he coped with the low-level dizziness which he felt most days — his symptoms began to rule his life.

On top of overwhelming rocking and swaying sensations, he had extreme fatigue, insomnia, leg weakness, burning and numbness throughout his face, neck pain, and felt as if he was floating and disconnected from the world. Robert was referred to a psychiatrist, who began to treat him with sertraline. He sees his psychiatrist once a month, does vestibular rehabilitation and is now back working full-time

Professor Rea says this ‘disconnected’ feeling is common, as it’s ‘a consequence of the failure of the brain to accurately take in sensory information’.

‘I wondered why it was suddenly so bad,’ says Robert. ‘And I began to feel very depressed; it got to a point where there was a day when I was lying in bed having multiple panic attacks.’

He needed the next four months off work and had to stop socialising, as being in busy places would set off his symptoms. ‘Some days, even getting down the stairs was a struggle,’ he says.

Robert had private health insurance, and saw a number of specialists, including a neurologist who sent him for a brain scan (which came back clear), and an ear, nose and throat specialist who ruled out vestibular disorders. This is typical of PPPD.

‘Usually the tests will come back normal,’ says Professor Rea. ‘However, there can be an underlying vestibular condition co-existing alongside it such as vestibular neuritis and this needs to be treated before we can treat the PPPD.’

It wasn’t until he had a private appointment with Professor Linda Luxon at the London Hearing and Balance centre (she also leads the NHS clinic at the National Hospital for Neurology and Neurosurgery in London) in February, that Robert was finally diagnosed.

‘I had every test you could think of for balance disorders,’ says Robert. When these tests all came back normal Professor Luxon mentioned PPPD and recommended he see a psychiatrist. This is the other surprising feature of PPPD — it appears to be stress-related and while the cause is not psychological, people with it seem to respond well to psychological therapies.

‘Many people with PPPD have pre-existing anxiety and depression,’ adds Professor Rea. ‘But to be clear this condition isn’t caused by those.’

And while some patients may be helped by psychological support, Professor Rea says most of his patients are successfully treated with a clear diagnosis, physiotherapy, and medication if required.

‘At first, I was frustrated at being told it was “all in my head”,’ says Robert. ‘But reading more, it did describe what I was going through. The month my symptoms got bad, I was having a stressful time at work, and was buying a house.’

Low doses of antidepressants such as citalopram and sertraline are shown to help the majority of those with PPPD, according to Professor Rea. Although more research needs to be done into exactly why this is.

He adds that medication should be prescribed alongside vestibular rehabilitation therapy which involves ‘retraining the brain’, and doing activities to make yourself more dizzy on purpose.

Robert was referred to a psychiatrist, who began to treat him with sertraline. He sees his psychiatrist once a month, does vestibular rehabilitation and is now back working full-time.

‘While I still have dizziness and I’m not sure if I’ll be 100 per cent back to “normal” I am very happy with my progress,’ he says.

‘And I want to give hope to other people that it will get better with the right treatment.’