DJ Ruckus spotted with a Shanina Shaik lookalike in Miami

He certainly has a type! DJ Ruckus flaunts his ripped physique in Miami with a Shanina Shaik lookalike – two weeks after she filed for divorce

They filed for divorce on July 2, after just one year of marriage.

But DJ Ruckus appears to be enjoying the single life following his split from Victoria’s Secret model Shanina Shaik.

The 35-year-old, whose real name is Gregory Andrews, was spotted with a mystery brunette who looked strikingly similar to his estranged wife in Miami Beach, Florida on Monday.

DJ Ruckus, who is in Miami for Swim Week, displayed his ripped physique in a pair of striped boardshorts.

He looked in happy spirits while chatting to friends, including the young woman who strongly resembled his ex.

The mystery beachgoer, possibly a model, showed off her sensational figure in a strappy black bikini. 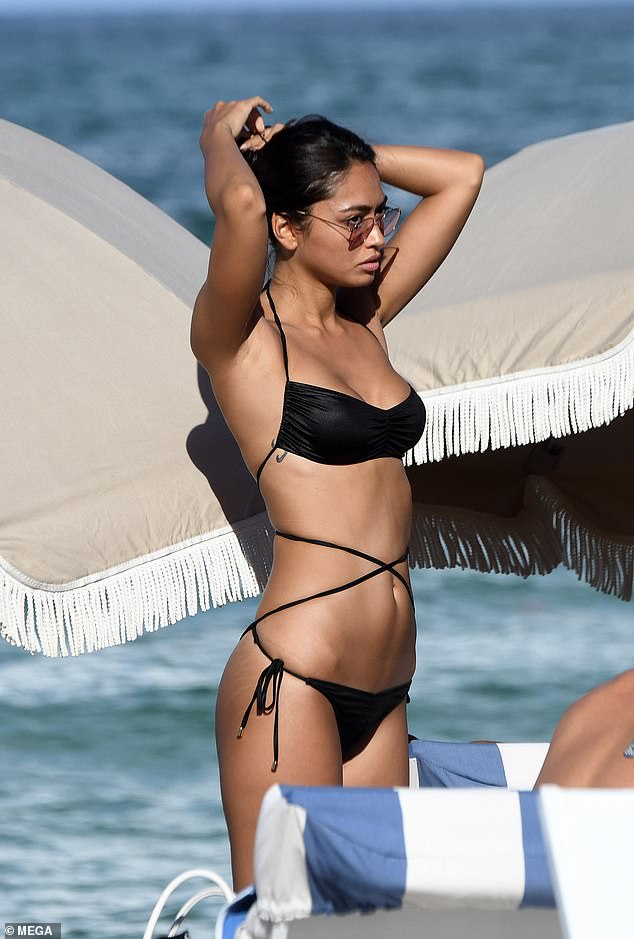 Hmm! DJ Ruckus, whose real name is Gregory Andrews, was spotted with a mystery brunette (pictured) who looked strikingly similar to his estranged wife

Her exotic features and flawless body will likely draw comparisons to Shanina, but it’s unclear if she and DJ Ruckus are romantically involved.

A source told Page Six on Monday that DJ Ruckus is ‘having a good time’ rubbing shoulders with models and celebrities at Swim Week.

An onlooker who saw him at The Plymouth Hotel in Miami Beach on Thursday said he ‘was mingling and dancing in the DJ booth.’

‘[He was] definitely in great spirits,’ they added.

DJ Ruckus and Shanina announced their separation last month and she officially filed for divorce on Tuesday, July 2.

At the time of their split, a spokesperson said: ‘After careful thought and consideration, Shanina and [Ruckus] have decided to separate.

‘They move forward with much mutual respect and love for each other, and ask to please respect their privacy during this time.’