A wedding DJ stole 40 cards stuffed with cash on a couple’s big day – forcing them to honeymoon in Butlins instead of jetting abroad.

Lauren George, 26, from Bradford, tied the knot with Christian, 29, in July but said her big day was ruined when Tom Butterworth stole hundreds of pounds from them.

The DJ even ‘defaced’ their wooden guest book frame by writing ‘c***’ and ‘paedo’ on two of the wooden hearts – something the couple found ‘heartbreaking’ as they are foster carers. 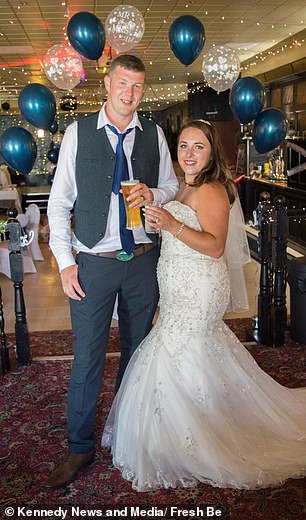 Lauren George, 26, from Bradford, tied the knot with Christian, 29, in July (where they are pictured on the right) but said her big day was ruined when Tom Butterworth (left, in an undated photo) stole hundreds of pounds from them

Butterworth, from Leeds, has since apologised and received a caution for the theft.

He was also forced to repay £200 to the couple – an amount they claim is much lower than what was in the cards.

Despite admitting to the brazen theft, Butterworth is still advertising his services as a DJ on his Facebook page through another company – though they claim to have not worked with him since the incident came to light.

Mrs George described her shock at seeing Butterworth was still touting his services.

‘To have that happen on our wedding was disgusting,’ she said. ‘Mentally, this has made me not want to trust another DJ. You’d expected to be able to trust someone like that.

‘I felt like it was going to happen to someone else when I noticed he was still advertising as a DJ. I want to make sure no-one else gets the same treatment. I don’t want anyone else to feel the same.’ 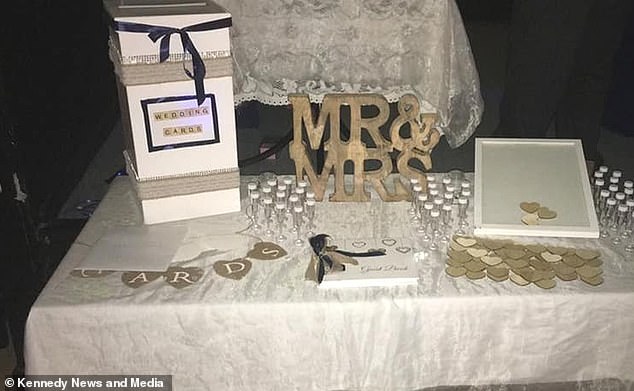 The DJ even ‘defaced’ their wooden guest book frame (right) by writing ‘c***’ and ‘paedo’ on two of the wooden hearts – something the couple found ‘heartbreaking’ as they are foster carers. It is pictured after the July wedding in Bradford

The incident was even harder to deal with for Mrs George because she was suffering a miscarriage throughout the ordeal.

‘We actually had an early miscarriage on the day of our wedding – that was ongoing for a few days,’ she said.

‘It was terrible to go through that on my wedding day too. It was like everything hit me like a truck.’

Mrs George had initially booked another DJ but was frustrated when he sent Butterworth as a last-minute replacement without warning them.

Angry they hadn’t been sent the original DJ they booked, the couple questioned why Butterworth was there as his replacement.

The entertainer, who also works in the public sector, claims he felt threatened after wedding guests got too close to equipment and was worried about not being paid due to the dispute. 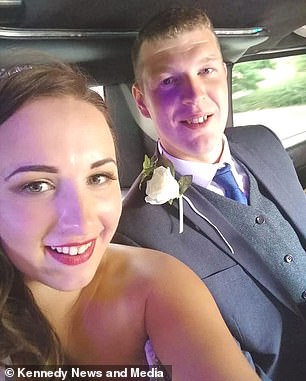 Mrs George said: ‘We had actually employed a DJ that we’d seen before, but he sent Tom instead without telling us.

‘Tom waited until the party had finished and told the pub that my husband or one of my guests had started an altercation with him. He said he needed some security. The bar shut all the doors and locked him inside.

‘We were just outside with all our guests at the end of the night and he went into the party room after the bar staff had cleared everything.’

Butterworth was caught on camera stealing the cash from the cards before bundling the money into his rucksack.

‘I’m a foster carer so it was heartbreaking to see he thought that was acceptable.’

After losing the cards, one of which Mrs George claims contained a £200 cash gift from her father, she had the ’embarrassing’ task of contacting guests and finding out how much they’d given for insurance purposes.

Butterworth subsequently handed himself into police after claiming it was completely out of character and was given a caution. 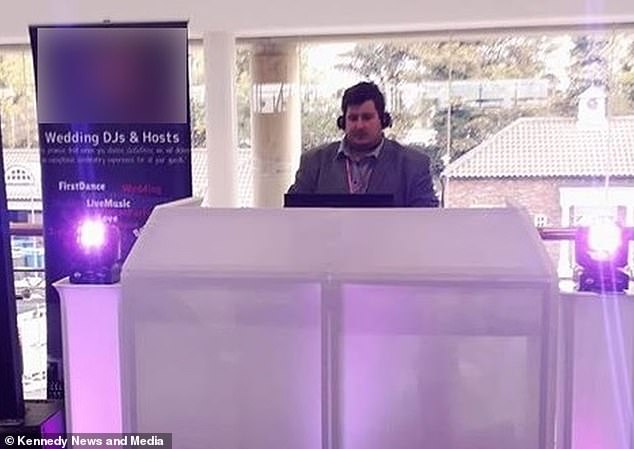 Butterworth subsequently handed himself into police after claiming it was completely out of character and was given a caution. He is seen here in an undated photo

However Mrs George believes he ‘got off too lightly’.

‘He said to the police that there was only £180 cash in these cards and £20 in vouchers,’ she said. I then had the embarrassing task of asking people how much they’d put in the cards.

‘My dad alone put £200 in a card and I’m never going to see that again just because Tom was greedy.

‘He’d been paid for his work and stolen my belongings. He’s admitted it to the police and to me personally. 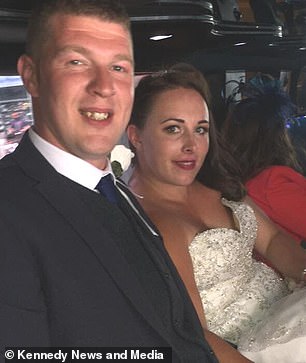 Despite Mr and Mrs George (pictured during their July wedding day in Bradford) stating more money was in the cards, Butterworth claims this money was not in the cards he had stolen

‘I’m already thinking of doing a wedding abroad, again. To me, it completely ruined the thoughtfulness of all my guests.’

After being contacted regarding the incident, Butterworth admitted he had stolen the £200 in money and vouchers as well as writing the two offensive terms on their guestbook frame.

Butterworth said: ‘I went to the police station. I gave the money back. The words written on the hearts was me. That was again, anger. I didn’t really know how to respond.

‘The amounts she’s told you is all, I’m not going to say made up if people have told her that’s how much they’ve put in, I don’t know what they’ve told her.’

The DJ said Mr George approached him at the end of the night and said he wasn’t going to be paid, sparking a confrontation.

‘I did take the cards. I’ve never said I didn’t,’ he said. ‘There was £180 in cash and £20 in vouchers. That money stayed in my car from that night until the day I went to the police station.

‘I took them out of anger and adrenaline. It’s not something I’ve ever done before, I’ve no record. I couldn’t apologise enough to them the next day. I felt I was unprofessional by what I did.’

A spokesperson for West Yorkshire Police confirmed a man was given a conditional caution after admitting taking and damaging property.