Novak Djokovic calls time out: World No 1 joins Roger Federer in missing US Open warm-up event to recover from his Olympic misery… and he could head into next Grand Slam with minimal preparation

Novak Djokovic’s withdrawal from the main warm-up event to the US Open has added to the pall of uncertainty that is hanging over tennis.

The 34-year-old Serb may go into a potentially historic edition of Flushing Meadows with minimal preparation after pulling out of next week’s Western and Southern Open in Cincinnati.

He joined Roger Federer on the absentee list after reporting that he was taking longer to recover from his embarrassing Olympic exit than expected.

Djokovic did not specify whether that was related to the shoulder injury he cited as the reason for withdrawing from his mixed doubles bronze medal match in Tokyo.

His decision has increased the ambiguity around the upcoming Grand Slam, as New York battles an ongoing rise in Covid cases driven by the Delta variant.

‘I am taking a bit longer to recover and recuperate after quite a taxing journey from Australia to Tokyo,’ said Djokovic, who threw racket-throwing tantrums during his failed singles campaign in Japan.

‘Sadly, that means I won’t be ready to compete in Cincinnati this year so I’ll turn my attention to the US Open.’

One of the few certainties around tennis in the post-Wimbledon period is that Federer turned 40 on Sunday.

The Swiss legend has yet to declare whether he will play at the US Open. However, he is known to be determined to play less than two weeks later at the Laver Cup event in Boston — which is his brainchild and operated by his management company. 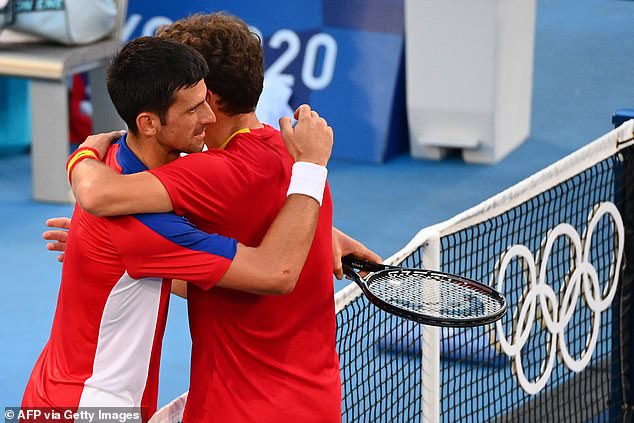 The ‘Big Three’ are tied on 20 Grand Slam titles each with Djokovic going for the calendar Grand Slam, but it looks like Rafael Nadal will not be giving up the race without a fight.

Among the trio, Nadal should be the best prepared in New York. After skipping Wimbledon and Tokyo he played last week in Washington DC and is in the draw for this week’s Canadian Open, opting for a long stay in North America.

Another intriguing aspect about the US Open is that, unlike at previous Grand Slams, there may be advantages for players who have been fully vaccinated.

Nadal and Federer have publicly stated that they have had the jab, but Djokovic — who has strongly hinted that he is sceptical about vaccines — has declined to say what his status is.

From the middle of this month, New York will be the first city in the US to begin a programme requiring anyone wanting to use an indoor gym, or a therapy room, to provide proof of being fully jabbed.

The same rules will apply to those wishing to eat inside a restaurant. Exactly how this will be enforced on-site for players — many of whom are yet to be vaccinated — is not clear, but there could be implications for how they warm up and prepare. 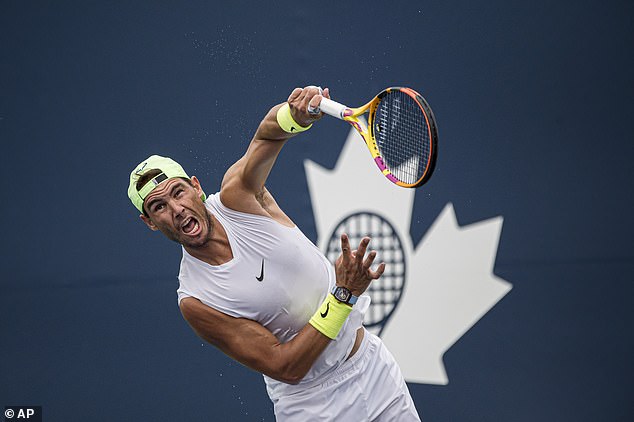 Despite the rise in local Covid cases, the US Open is hoping to operate at 100 per cent crowd capacity and there appears no danger that the event will not go ahead — unlike this month’s prestigious New York Auto Show, which has been postponed.

However, restrictions are being readied for areas such as media press conferences. And, according to a US Open spokesperson, all players are now being ‘encouraged’ to stay at Manhattan’s huge Inter-Continental hotel.

Unlike at Wimbledon, where competitors were ordered to stay in one central London ‘bubble’ location, that is not expected to be compulsory.

Yet, as with all things Covid, government-dictated rules can change quickly. The ATP Tour have abandoned their autumn tournaments in Asia, and Indian Wells in California will now host an elongated Masters event in October.

Meanwhile, Cam Norrie’s hopes of dislodging Dan Evans as British men’s No 1 were dashed on Tuesday night in Toronto.

Norrie lost in the first round to Olympic silver medallist Karen Khachanov 4-6, 7-5, 4-6, needing to make the last eight to usurp his compatriot.