DNA analysis of 35 people buried in a Neolithic tomb in the Cotswolds has revealed that most were descended from four women who all had children with the same man 5,700 years ago.

Researchers said they couldn’t be sure whether it was an example of polygamy – which involves being in a relationship or married to more than one partner – or serial monogamy, where a person has one ‘other half’ at any one time.

But genetic testing showed that 27 of the individuals were from five generations of a single extended family, allowing experts to put together ‘the oldest family tree ever reconstructed’.

Discovery: DNA analysis of 35 people buried in a Neolithic tomb in the Cotswolds (pictured in a reconstruction) has revealed that most were from five generations of a single extended family 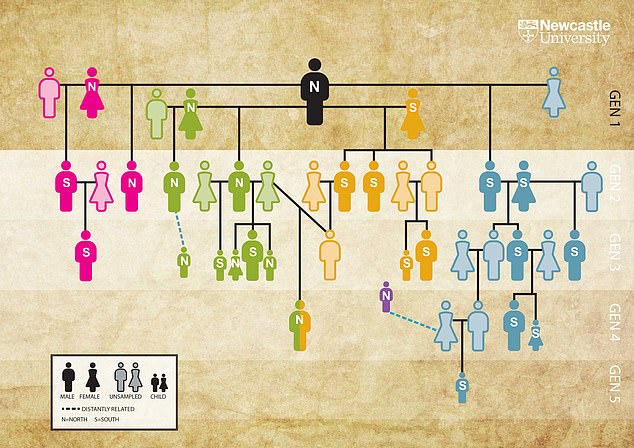 Lineage: The majority of the individuals, 27 in total, were descended from four women who all had children with the same man and lived around 3700 to 3600 BC. Researchers said the findings allowed them to ‘uncover the oldest family tree ever reconstructed’ (pictured)

WHY DO EXPERTS THINK THE NEOLITHIC FAMILY COULD HAVE BEEN POLYGAMOUS?

Polygamous is the practice of marrying multiple spouses.

When a man is married to more than one wife at the same time, sociologists call this polygyny, which is what the researchers think may be a possibility in this case.

The word polygamous was first coined in the 1960s and literally means ‘many loves’ in Latin.

DNA analysis of 35 people buried in a Neolithic tomb in the Cotswolds has revealed that most were from five generations of a single extended family.

Researchers found that 27 of them were descended from four women who all had children with the same man.

They were able to establish this with the help of genetic testing.

However, they said they couldn’t be sure whether it was an example of polygamy or serial monogamy, where a person has one ‘other half’ at any one time.

It is the first study to reveal in such detail how prehistoric families were structured and provides new insights into kinship and burial practices in Neolithic times, the authors said.

The cairn at Hazleton North included two L-shaped chambered areas, to the north and south of the main ‘spine’ of the linear structure, where individuals were buried.

Researchers found that men were generally laid to rest with their father and brothers, suggesting that descent was patrilineal, with later generations buried at the tomb connected to the first generation entirely through male relatives.

While two of the daughters of the lineage who died in childhood were buried in the tomb, the absence of adult daughters suggests that their remains were placed either in the tombs of male partners with whom they had children, or elsewhere.

Dr Chris Fowler of Newcastle University, the first author and lead archaeologist of the study, said: ‘This study gives us an unprecedented insight into kinship in a Neolithic community.

‘The tomb at Hazleton North has two separate chambered areas, one accessed via a northern entrance and the other from a southern entrance, and just one extraordinary finding is that initially each of the two halves of the tomb were used to place the remains of the dead from one of two branches of the same family.

‘This is of wider importance because it suggests that the architectural layout of other Neolithic tombs might tell us about how kinship operated at those tombs.’

Although the right to use the tomb ran through patrilineal ties, the choice of whether individuals were buried in the north or south chambered area initially depended on the first-generation woman from whom they were descended, suggesting that these first-generation women were socially significant in the memories of this community.

It is also thought that stepsons were adopted into the lineage.

Researchers said there was evidence of males whose mother was buried in the tomb but not their biological father, and whose mother had also had children with a male from the patriline.

The cairn at Hazleton North included two L-shaped chambered areas (pictured), located to the north and south of the main ‘spine’ of the linear structure, where individuals were buried

Although 27 of the 35 people buried at the Neolithic site were related, the other eight were not, suggesting that biological relatedness was not the only criterion for inclusion in the tomb.

However, as three of them were women it is possible they could have had a partner in the tomb but either did not have any children or had daughters who reached adulthood and left the community so are absent from the tomb.

Iñigo Olalde of the University of the Basque Country and Ikerbasque, the lead geneticist for the study and co-first author, said: ‘The excellent DNA preservation at the tomb and the use of the latest technologies in ancient DNA recovery and analysis allowed us to uncover the oldest family tree ever reconstructed and analyse it to understand something profound about the social structure of these ancient groups.’

Ron Pinhasi, of the University of Vienna, said: ‘It was difficult to imagine just a few years ago that we would ever know about Neolithic kinship structures.

‘But this is just the beginning and no doubt there is a lot more to be discovered from other sites in Britain, Atlantic France, and other regions.’

Britain began the move from ‘hunter-gatherer’ to farming and settlements about 7,000 years ago as part of the ‘Neolithic Revolution’

The Neolithic Revolution was the world’s first verifiable revolution in agriculture.

The period saw the widespread transition of many disparate human cultures from nomadic hunting and gathering practices to ones of farming and building small settlements.

Stonehenge, the most famous prehistoric structure in Europe, possibly the world, was built by Neolithic people, and later added to during the early Bronze Age

The revolution was responsible for turning small groups of travellers into settled communities who built villages and towns.

Some cultures used irrigation and made forest clearings to better their farming techniques.

Others stored food for times of hunger, and farming eventually created different roles and divisions of labour in societies as well as trading economies.

In the UK, the period was triggered by a huge migration or folk-movement from across the Channel.

The Neolithic Revolution saw humans in Britain move from groups of nomadic hunter-gatherers to settled communities. Some of the earliest monuments in Britain are Neolithic structures, including Silbury Hill in Wiltshire (pictured)

Today, prehistoric monuments in the UK span from the time of the Neolithic farmers to the invasion of the Romans in AD 43.

Many of them are looked after by English Heritage and range from standing stones to massive stone circles, and from burial mounds to hillforts.

Stonehenge, the most famous prehistoric structure in Europe, possibly the world, was built by Neolithic people, and later finished during the Bronze Age.

Neolithic structures were typically used for ceremonies, religious feasts and as centres for trade and social gatherings.