The good news is that I am seven years younger than my birth certificate claims. The other news — possibly less cheering, now that free TV licences for the over-75s are to be scrapped — is I’m likely to become a ‘super centenarian’, living to 110 or more.

Welcome to epigenetic analysis, the latest spin on DNA science, which goes beyond revealing the genes you were born with to looking at how your lifestyle affects them. It can also predict your health prospects, giving you the chance to improve them.

DNA — or deoxyribonucleic acid — is our chemical ‘blueprint’, and tests can already detect whether a person carries inherited genetic mutations that cause specific conditions. For example, certain mutations of three genes, BRCA1, BRCA2 and TP53, can increase a woman’s chance of breast or ovarian cancer and a man’s of prostate cancer.

But environmental and lifestyle factors — such as pollution, smoking, sleeping, drinking and eating — leave telltale chemical marks, or ‘biomarkers’, on DNA that also affect how the cells act.

‘Fighting fit on the inside’: Jonathan basks in the good news

This process, called methylation, can interfere with the instructions issued by DNA to cells, potentially triggering illnesses and fatal diseases.

Until now, the science of epigenetics has been confined to research labs, but I was one of just a handful of people in the world to have a consumer version of an epigenetic DNA test.

The test was developed by Chronomics — founded by three Cambridge University PhD students — which claims to be the first company in the world to offer it to consumers.

Age is not yet a pressing personal issue for the three scientists themselves: Tom Stubbs, whose field is epigenetics, is only 28, as is the company’s chief scientific officer, Daniel Herranz, who worked on software that helps researchers analyse biological data, while chief business development officer Toby Call, a biochemist, has just turned 30.

The test they’ve devised involves simply spitting into a plastic vial, posting it in the pre-paid envelope and waiting for your password-protected results to pop up on the company’s site.

But analysis of what’s happening at 20 million sites on your DNA is a painstaking process that can take up to eight weeks.

Chronomics boils down the findings to three easy-to-grasp categories: your levels of smoke exposure, your metabolic status (how efficient your body’s vital chemical processes are, from digesting food to getting rid of waste) and your biological age.

A lifetime non-smoker, my exposure to tobacco smoke measured at just 2 per cent. This is at the lower end of a typical range for non-smokers of 0 to ten and was rated ‘good’ — the best of three options including ‘normal’ and ‘needs improvement’.

Smoking is a risk factor for stroke, heart disease and lung cancer and a typical smoker’s exposure is between 64 and 78 per cent.

Next up was my metabolic status, assessed from 4,327 sites in my DNA and also rated ‘good’. According to Chronomics, I am ‘fighting fit on the inside’. 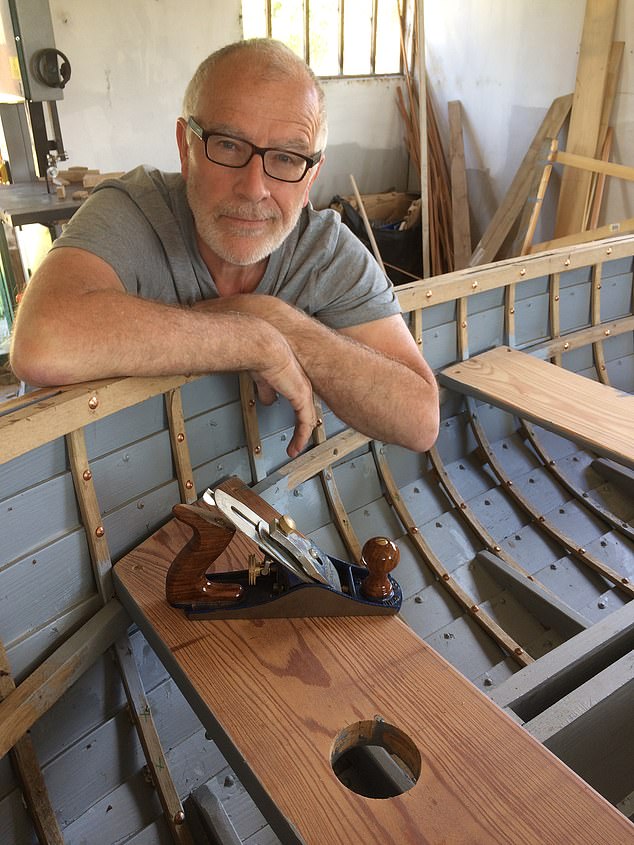 Born in October 1955, I was due to celebrate my 64th birthday later this year — but not any more. According to Chronomics, inside I’m not a day over 56

But the result with bragging rights was my biological age.

Born in October 1955, I was due to celebrate my 64th birthday later this year — but not any more. According to Chronomics, inside I’m not a day over 56. Please don’t tell the Department for Work and Pensions. But how dependable are such predictions?

The potential for using epigenetics to predict lifespan and health prospects has been demonstrated by a number of studies, including one published in the journal Aging in 2016 involving more than 13,000 people. It concluded that measures of epigenetic age ‘were predictive of mortality, independent of chronological age’.

Other studies have demonstrated that epigenetic biomarkers can predict diseases — and, as research continues, the list of specific lifestyle diseases that can be predicted by epigenetics is growing, and includes osteoarthritis, heart disease and cancer.

Now, researchers at the University of California, Los Angeles (UCLA) have devised a method for analysing DNA biomarkers to predict how long you’ll live, when you’ll develop coronary heart disease or cancer, and even the age you’ll reach the menopause.

How the warm weather affects your health.

A 2013 study in Italy showed people walking in the sun without sunglasses quickly felt anger.

When we squint into the sun, it triggers the same facial expression as frowning — which, in turn, triggers angry feelings in the brain, said Daniele Marzoli, a psychologist from D’Annunzio University of Chieti-Pescara in Italy.

Another reason for a drop in mood might be reverse seasonal affective disorder. The theory is that warm weather interferes with the temperature centre of the brain which also plays a role in the production of hormones

As Steve Horvath, a professor of human genetics and biostatistics at UCLA, explains, it ‘was named after the grim reaper for a good reason: it works remarkably well at predicting lifespan’.

So far GrimAge is only available to fellow researchers.

The epigenetic testing carried out by the researchers at UCLA and others has used DNA samples from blood, not saliva as Chronomics does.

Many people, says Professor Horvath, are hopeful that the results based on blood testing might be repeated with saliva samples, but ‘I’m not yet aware of any publication that has shown that epigenetic biomarkers measured in saliva also predict lifespan’, he told Good Health.

But Chronomics is adamant that the results with blood do translate to saliva.

‘Saliva is an emerging tissue in studies that measure methylation marks because it is very easy to collect non-invasively,’ says Dr Herranz. ‘Biological age biomarkers have been shown to work also in saliva in large populations.’ (Good Health has seen at least five papers that support this claim.)

But what about the suggestion that at 56, my biological age (as distinct from my chronological age of 63) places me in the ‘biological age range of people living to 110 or more’?

The evidence on which this is based was published in Aging in 2015 by U.S. and Italian researchers who looked at epigenetic biomarkers in 82 Italian ‘semi-supercentenarians’ — people who live to between 105 and 109.

‘Obviously, the sample size in this study is moderate — it is more difficult to recruit centenarians,’ concedes Dr Herranz, but ‘further studies should validate these conclusions’.

But, in fact, if I were to live to anything like 110, I would be a medical marvel.

But the international Gerontology Research Group, which keeps track of people who live to 110 or more, estimates that there are no more than 33 ‘supercentenarians’ in the world. All are women and none was born in the UK.

Predictions of longevity aside, taking a one-off epigenetic test offers an insight into one’s state of health. But it is only a snapshot and, given my excellent results, there was little I could do other than keep doing more of the same — eating and sleeping well, as I do, limiting alcohol to a couple of drinks three times a week and exercising four days a week.

Predictions of longevity aside, taking a one-off epigenetic test offers an insight into one’s state of health. But it is only a snapshot and, given my excellent results, there was little I could do other than keep doing more of the same — eating and sleeping well, as I do, limiting alcohol to a couple of drinks three times a week and exercising four days a week.

Through the Chronomics website you can book online appointments experts, including a doctor specialising in lifestyle medicine and a nutritionist.

There is little new in their advice: if you smoke, they’ll tell you not to; if you drink too much alcohol, you should cut down; if you’re overweight, they’ll recommend shedding some pounds.

Chronomics says the way to make the most of the science is to take its test at yearly intervals to see exactly what progress, if any, you’ve made. And this, it adds, is the value of epigenetics.

Until now, says Dr Herranz, ‘it has been difficult for people to assess if lifestyle interventions are having an overall positive effect.

‘Now we have a way of objectively measuring the impact of changes and predicting their impact on your future health.’

One of the largest studies (involving 4,500 people) proving that epigenetic markers can be used to measure improvements was published in Aging in February last year. It found that ‘the conventional wisdom’ of eating a high plant-based diet with lean meat, moderate alcohol intake and physical activity are key to the improvements.

Predicting the risk of specific lifestyle-induced diseases, such as cancer or heart disease, is already theoretically possible with epigenetic testing, but ‘we don’t give out this information’, Dr Herranz told Good Health.

‘We have to make sure these modifiable risk estimates for specific diseases are really, really accurate. We’re considering the way people react to this information and looking to inspire positive behavioural change, not just scare people.’

For now, Chronomics’ clients will be presented only with an ‘aggregated measurement of risk’ — in other words, their biological age — rather than being told, for example, that they have a 10 per cent increased risk of cancer.

Dr Herranz says the benefit of epigenetic testing is not only to individuals but to the entire healthcare system.

As he explains: ‘If we can spot the risk of a disease ten or 20 years before it actually happens and do something about it, we can reduce exponentially the number of people who need super-expensive treatments.’