‘Do it for your big momma’: Surgeon general pleads with black community to help ‘slow the spread’

Surgeon General Jerome Adams pleaded with the African-American community and other communities of color to follow the government’s guidelines to ‘slow the spread’ of the coronavirus – as those communities are being disproportionately hit by the pandemic.

‘We need you to do this if not for yourself than for your abuela. Do it for your granddaddy, do it for your big momma, do it for your poppop,’ the nation’s top doctor said Friday at the daily coronavirus taskforce briefing – later defending his use of slang.

Adams assured Americans of color that ‘there is nothing inherently wrong with you,’ but ‘social ills’ are likely a contributing factor when looking at the dire statistics that the outbreak has killed twice as many Americans of color. 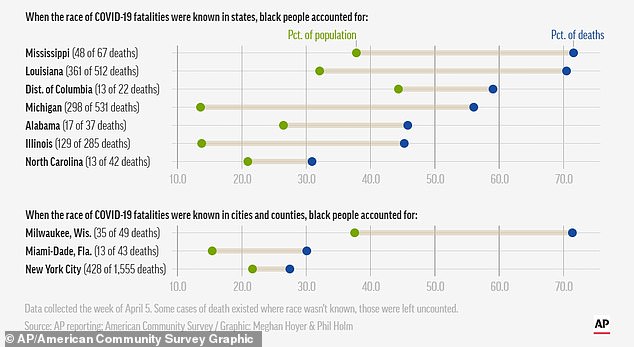 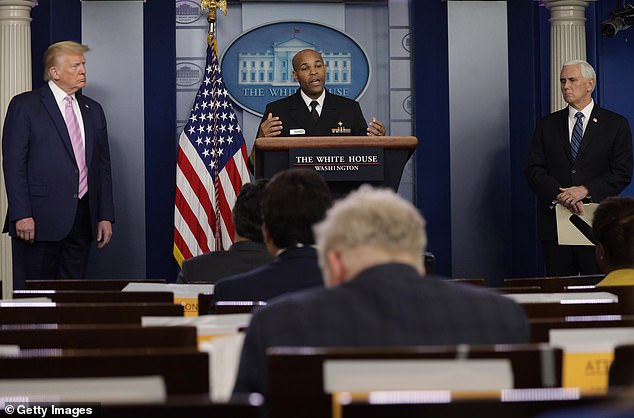 On Wednesday, New York released data that showed black and Latino people were twice as likely to die from coronavirus than white residents.

In Louisiana, with New Orleans being another hot spot, 70 per cent of the dead have been black. Black people only make up 32 per cent of residents in the state.

‘Everywhere we look, the coronavirus is devastating our communities,’ said Derrick Johnson, president and CEO of the NAACP.

Johnson and other black leaders, including Rev. Jesse Jackson, were on a call Friday with Vice President Mike Pence, who is leading the White House’s coronavirus taskforce, and Adams, who took over the briefing room podium to discuss the call and the numbers.

‘So what’s going on?’ he said.  ‘Well it’s alarming, but it’s not surprising that people of color have a greater burden of chronic health conditions.’

Among those are high blood pressure, which Adams said African-Americans and Native Americans see at a much younger age than their white counterparts.

‘Puerto Ricans have higher rates of asthma and black boys are three times as likely to die of astham than their white counterparts,’ Adams said.

Adams then pulled out his own red inhaler, used to open the airwaves during an asthma attack.

‘As a matter of fact, I’ve been carrying an inhaler in my pocket for 40 years out of fear of having a fatal asthma attack,’ said Adams, who is black. ‘And I hope that showing you this inhaler shows little kids with asthma all across the country that they can grow up to be Surgeon General one day.’

‘But I more immediately share it so that everyone knows it doesn’t matter if you look fit, if you look young, you are still at risk for getting and spreading and dying from coronavirus,’ he warned.

Adams said the ‘chronic burden of medical ills’ among Americans of color is making those communities less resiliant to the ‘ravages’ of COVID-19.

‘And it’s possible, in fact likely that the burden of social ills is also contributing,’ he remarked.

He mentioned trends like fewer people of color having jobs where they can work from home. He also pointed to housing trends – where many Americans of color live in urban, and thus more densely-packed, places and have multi-generational living arrangements.

‘We tell people to wash their hands, but a study shows that 30 per cent of homes on Navaho nation don’t have running water, so how are they going to do that?’ he asked.

The takeaway, Adams said, was that ‘people of color experience both more likely exposure to COVID-19 and increased complications from it.’

‘But let me be crystal clear, we do not think people of color are biologically or genetically predisposed to get COVID-19, there is nothing inherently wrong with you,’ he said. ‘But they are socially pre-disposed to coronavirus exposure and have a higher incidence of the very diseases that put you at risk for severe complications of coronavirus.’

Adams then encouraged members of those communities to follow the guidelines of social distancing, mask-wearing and hand-washing strictly.

‘Wash your hands more often than you ever dreamed possible,’ he said. ‘Avoid alcohol, tobacco and drugs,’ he advised.

‘And call your friends and family, check in on your mother, she wants to hear from you right now,’ Adams said.

And with the mention of mothers, Adams listed nicknames for Spanish grandmothers and black moms.

Later in the briefing, PBS NewsHour’s Yamiche Alcindor asked Adams to respond to people who might have been offended by his colloquialisms.

‘We need targeted outreach to the African-American community and I used the language that is used in my family,’ Adams said. ‘I have a Puerto Rican brother-in-law, I call my granddaddy “granddaddy” I have relatives who call their grandparents big momma.’

‘That was not meant to be offensive,’ he added. ‘That’s the language that we use and I use and we need to continue to target our outreach to those communities.’

Alcindor also pressed Adams on why he mentioned drugs and alcohol, when talking specifically about communities of color.

‘All Americans need to avoid these substances at all times,’ he said.