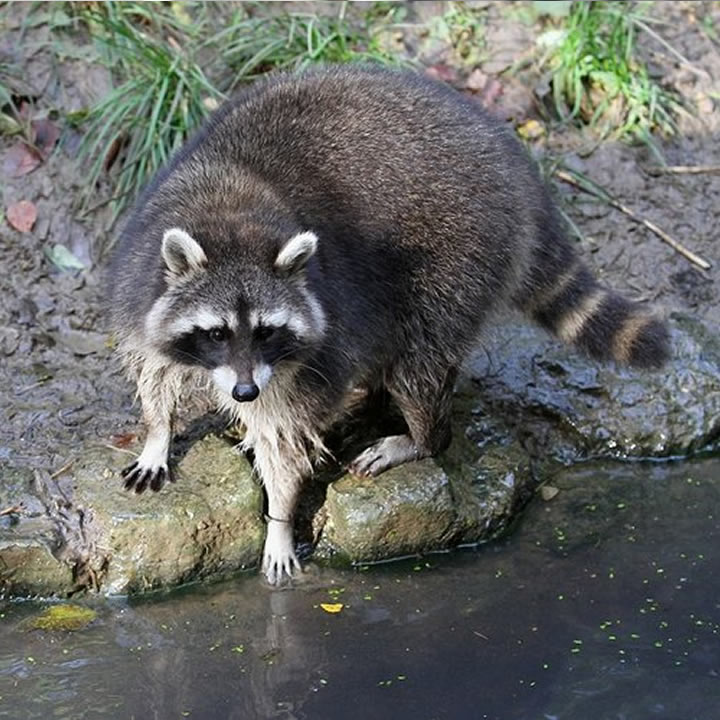 Thinking about adding a nice pond to your backyard? In love with the idea of the lush greenery you’ll be able to plant around it, the schools of fish swimming around, the peace that’ll come with it…

A backyard pond serves several purposes – it increases the value of your home, it gives you a place to relax after a long, stressful day, and it creates a wonderful natural habitat. However, a pond does carry a few downsides.

There aren’t necessarily reasons not to build a pond in your yard, just to employ caution as you do.

Chiefly, a pond can cause trouble to a homeowner, as it attracts wildlife.

If a raccoon is causing issues near your pond consult with a wildlife control expert. They will be able to inspect the property, and identify how the raccoon got in, what attracted it (to prevent future infestations) and get rid of it.

Since raccoons are among the most common nuisance wild animals you’ll encounter on your property, let’s learn a bit about them. This will give you a better grasp of how the animal works, and how to best protect yourself.

The reason why raccoons are such a common pest in homes across the country is that they are opportunistic eaters.

That means they don’t really care what they eat or how they get it, as long as they can get their hands on some food. For you, the homeowner, this creates a number of problems, because it means you don’t just need to worry about one attraction, but all of them.

Raccoons are particularly attracted to ponds since these offer both food and water at the same time. Coupled with the raccoon’s habit of sleeping where it can (inside tree hollows, bushes or log piles, attics, etc.), this makes the raccoon a serious cause for concern.

Most raccoons are omnivores, meaning they will eat anything from veggies to the grass too, of course, meat. That being said, like most animals, they prefer tastier, more filling food, which in their case is any creature smaller than themselves.

Raccoons use their sharp claws to scoop out crayfish, frogs, and other aquatic critters from the water. Because a raccoon isn’t overly large, it’s not looking for large prey, otherwise, your pond (which can’t fit fish that are too big) would be safe.

But since the raccoon will gladly eat the smaller types of fish you typically see in a pond, you’ll need to take precautions.

What to look out for?

If you have a pond on your property, you’ll need to keep an eye out for signs of a raccoon infestation. This can manifest in any number of ways, with the most obvious being sightings of the raccoon itself.

Now, keep in mind that raccoons should only be seen at night. If someone tells you raccoons aren’t nocturnal, they are mistaken. The raccoon is primarily a night-dweller, which is why if you see one out and about in the daytime, it’s a serious cause for concern.

Typically, raccoons that are active during the day are in the late stages of rabies, and you should keep your distance. The raccoon is disoriented and scared, and very likely to attack, and obviously, rabies is not something to joke with.

Barring a raccoon sighting, you should pay attention to other common indicators of their presence, such as the presence of raccoon droppings near the water, and trampled grass by the pond.

Can you prevent raccoon infestations?

Understandably, you may not be willing to give up your dream of having a backyard pond simply because it might attract raccoons or other wild animals. Nor should you. What you should do, however, is take precautions.

You may also install common raccoon deterrents, such as motion-activated devices that flash bright lights, or high-pitched noises. These will mark your property as inhospitable to the raccoon, and determine them to move on.

Bear in mind, however, that installing bright lights and/or high noises in your backyard might not make you popular with the neighbors. Make sure you talk to them before buying any such device.

You could also try surrounding your pond with natural raccoon deterrents. As nocturnal animals, they have a heightened sense of smell, so are sensitive to strong scents. Cinnamon, chili pepper, and garlic should all be natural allies to your cause.

Keep in contact with a local wildlife removal company, so that you can take immediate action if you suspect an actual infestation.