Do you live in one of Britain’s happiest places?

The Cornish seaside town of St Ives has been crowned the happiest place to live in Britain.

The popular summer holiday location knocks Hexham off the top slot, having alternated with the Northumberland market town for first place since 2019.

St Ives is ranked top in 2022 after scoring highly on several factors, including how much people feel a sense of belonging to their area and whether there is access to green space.

Pictured: The popular Cornish seaside town of St Ives has been crowned as is the happiest place to live in Britain by Rightmove

St Ives residents scored it highly for its sense of community spirit, the sense of belonging the residents have, and how comfortable residents feel to be themselves.

A sense of belonging in an area is the number one factor that contributes to someone feeling happy where they live, according to Rightmove, which surveyed 21,000 people as part of its annual study.

Paul Le Bas, of St Ives estate agents Millerson, said: ‘St Ives has a vibrant and active local community that during the winter months enjoy all the local clubs and leisure facilities.

‘During the summer months we get to enjoy the three award winning beaches and great surf at Porthmeor while joining in with the holiday makers.

‘All year round we are able to visit the amazing restaurants and café bars. And the coastal walks are second to none.

‘From Porthminster round to Clodgy the views are stunning as you look out over the turquoise seas. And as the seasons change, so does the town. The sea shows its power with its Northly swells pounding the beaches and the town becomes a winter wonderland of festive lights for Christmas.

Since the pandemic started, demand for homes has greatly outstripped supply in many coastal areas such as St Ives.

While this trend eased this year, enquiries to buy a home in Cornwall are still 9 per cent higher than in 2019, according to Rightmove. 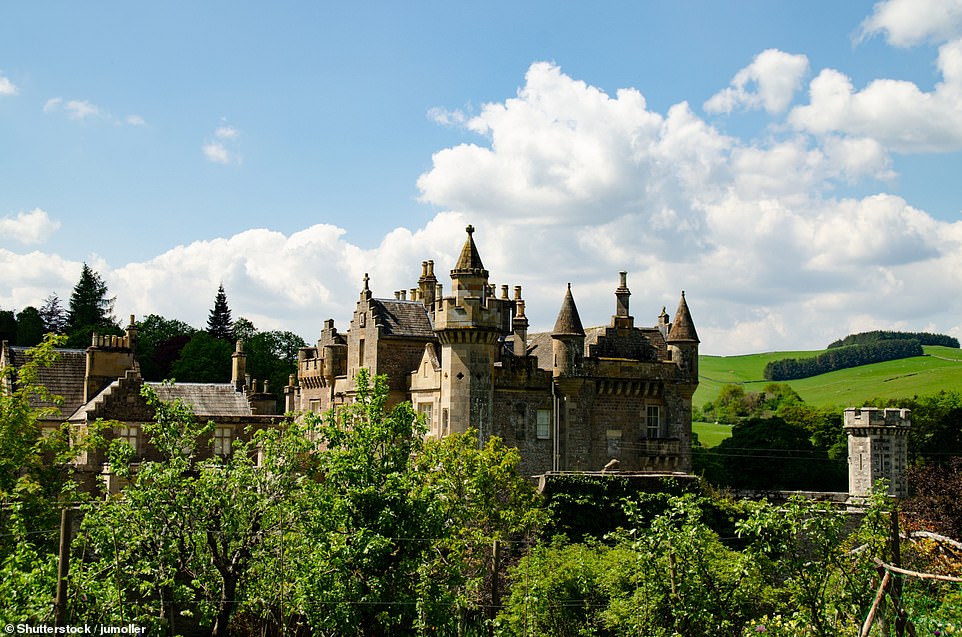 Pictured: Galashiels in the Scottish Borders is second in this year’s list of the happiest places to live in Britain

How much would it cost you to move?

Rising mortgage rates have added to the cost of moving home in recent months.

Borrowers can check how much it would cost them based on house value and loan size with our best mortgage rates calculator.

Galashiels in the Scottish Borders is second in this year’s list, which is the first time an area from Scotland has been ranked in the top three since 2016, and the market town of Woodbridge in Suffolk is third.

Residents of Galashiels scored it particularly highly on the friendliness and politeness of the people, and it came top in this area in Britain.

Alice Brown, of the Borders’ estate agents Rettie & Co, said: ‘It is no surprise that Galashiels is so loved by its residents. It is the largest of the Border towns, with a population of around 15,000.

‘Its central placement in the Borders makes it a popular location for families, giving a relaxed way of life while being in a commutable distance of Edinburgh via either the Borders Railway, bus or car.’

She added: ”Steeped in history, Galashiels has a wide variety of housing from classic period properties to new builds, offering something for every type of buyer. The countryside surrounding Galashiels also has much to offer, especially for those with an interest in rural pursuits such as walking, trail running, biking, and wild swimming.

‘In terms of entertainment, a variety of amenities are on the doorstep, including a cinema, gyms, a swimming pool, supermarkets, independent shops, cafes, a retail park, restaurants and well-regarded schools. The recently established Heartland Market brings together the town and local businesses.’ 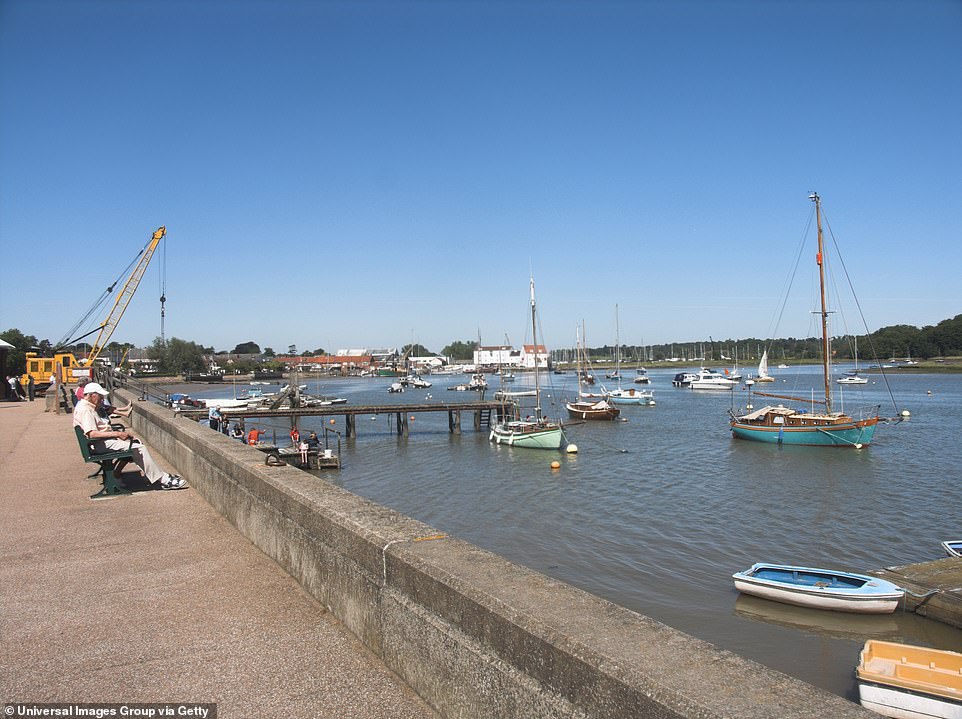 Pictured: Woodbridge in Suffolk also appears in this year’s list of places where residents in Britain are the happiest

HOUSES FOR SALE IN THE SEASIDE TOWN OF ST IVES

We take a look at some properties for sale in the Cornish seaside town of St Ives, which has been crowned the happiest place to live in Britain.

This four-bedroom house in St Ives has far-reaching views across the seaside town and its harbour. It boasts plenty of original features, including crittall windows and ornate fireplaces.

The property is on the market for £1.65million and is being sold by The Modern House estate agents. 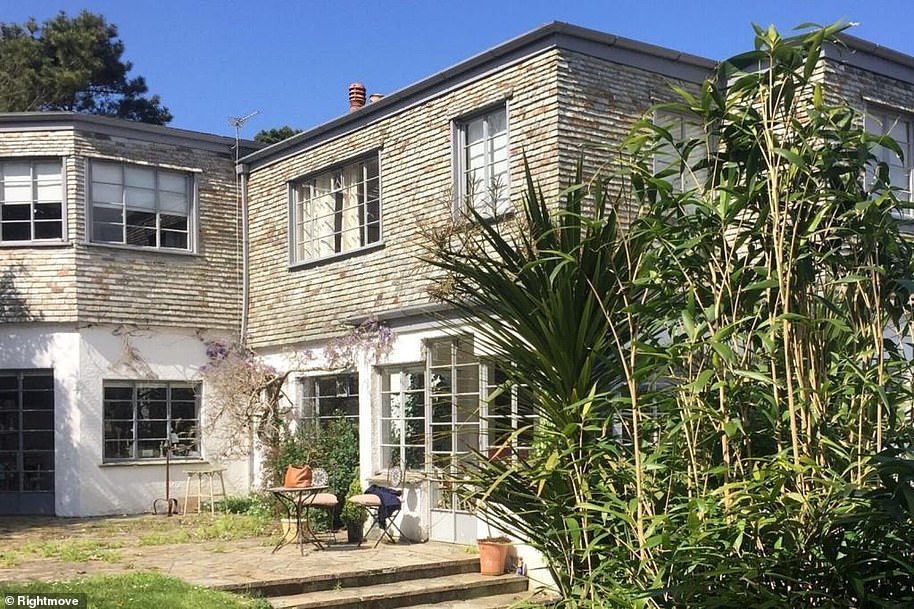 This extensive detached property is in the happy location of St Ives and comes with four bedrooms, along with a price tag of £1.65million 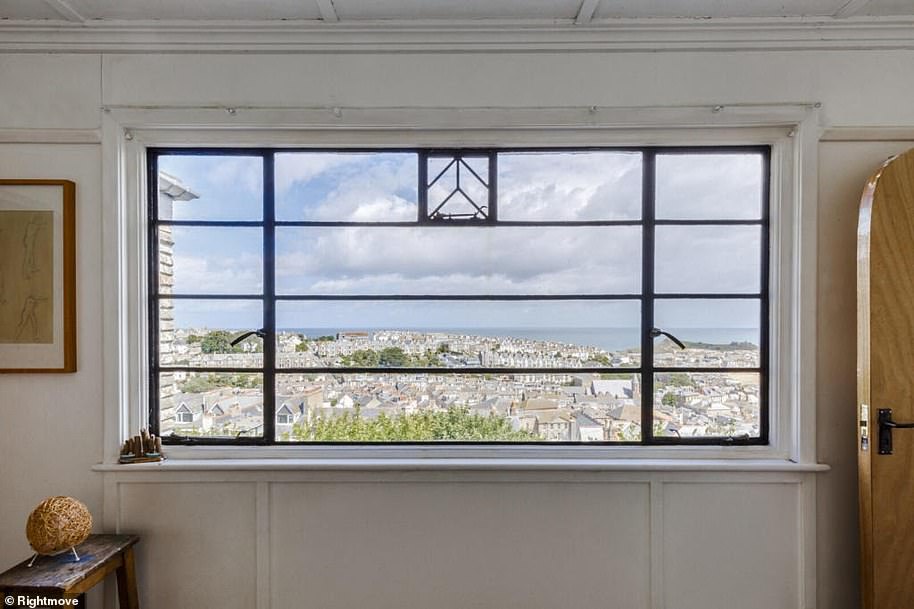 The family home boasts a stunning location in the popular Cornish seaside town, with far-reaching views across its harbour

This four-bedroom terrace cottage in St Ives has four bedrooms and three bathrooms. It is a stones throw to the beaches in the town.

The property is for sale for £650,000 and is being sold by Miller Countrywide estate agents. 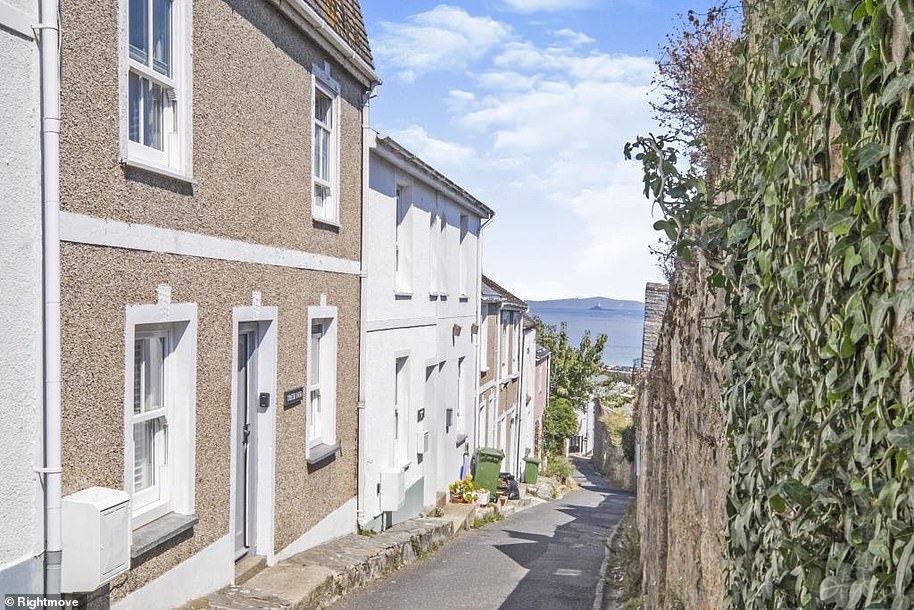 This four-bedroom terrace cottage in St Ives has four bedrooms and three bathrooms, and just a stones throw from the beaches 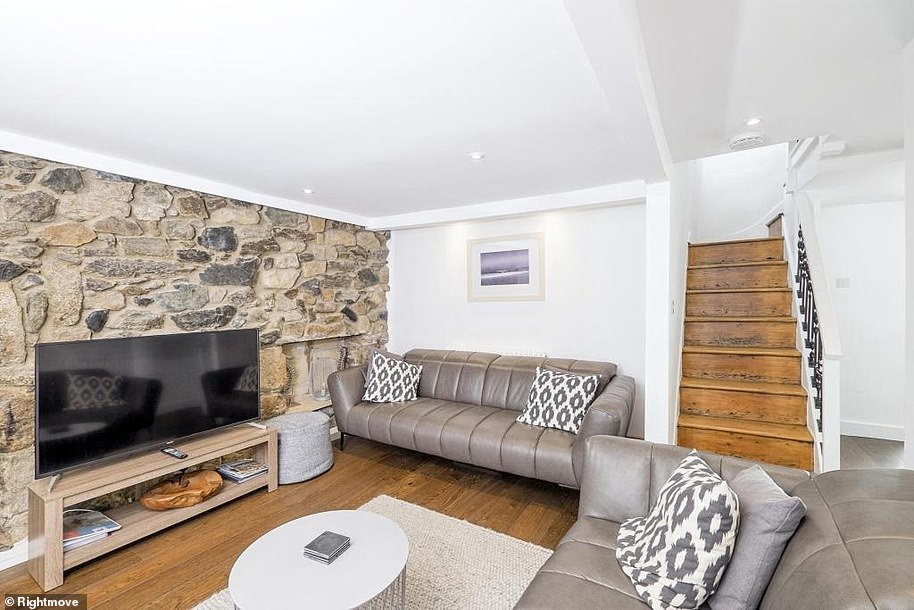 The classic seaside cottage has a modern twist inside and is for sale for £650,000 via Miller Countrywide estate agents

This two-bedroom cottage is in the centre of St Ives and is in one of the town’s most picturesque cobbled streets.

It is on the market for £350,000 and the sale is being handled by Miller Countrywide estate agents. 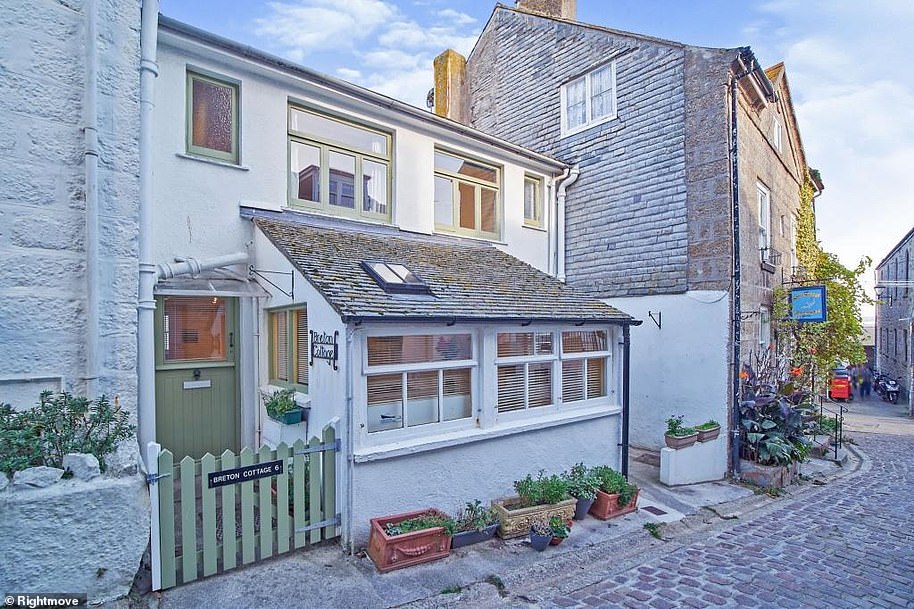 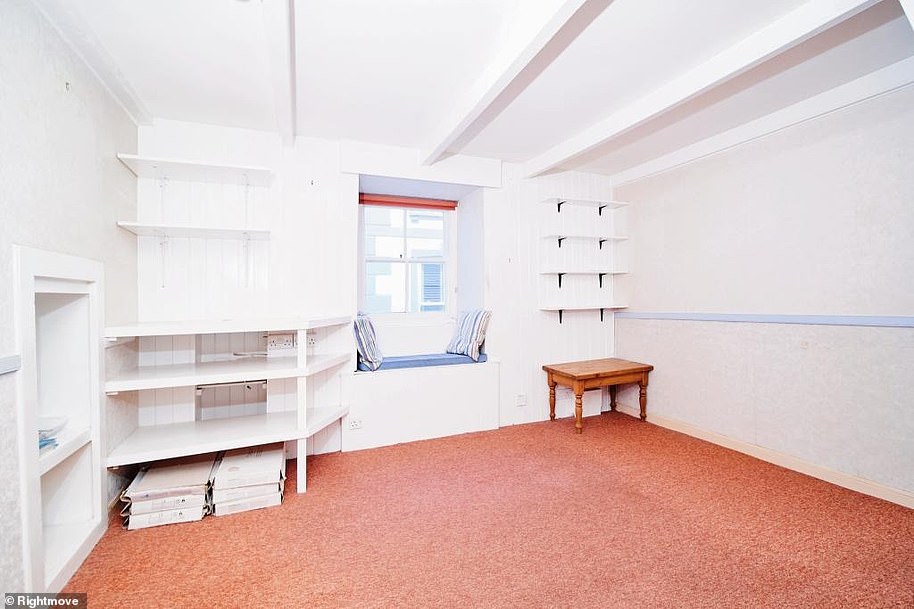 The quaint cottage requires some updating and is on the market for £350,000, with the sale being handled by Miller Countrywide 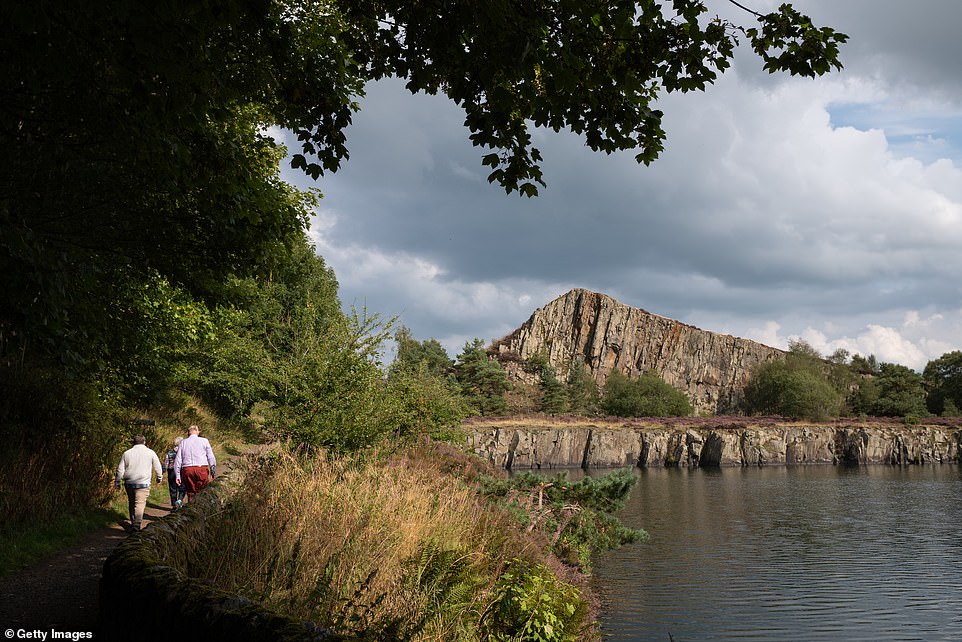 Pictured: The Northumberland market town of Hexham has dropped from the top slot but still features high in the list

This year’s study was carried out amid the cost of living crisis, which is something that was reflected in the survey results.

One in five renters said they planned to move in the next 12 months to get better value for money in their area, along with 16 per cent of buyers.

One in ten tenants said they were moving to reduce energy costs, rising to 12 per cent for buyers. 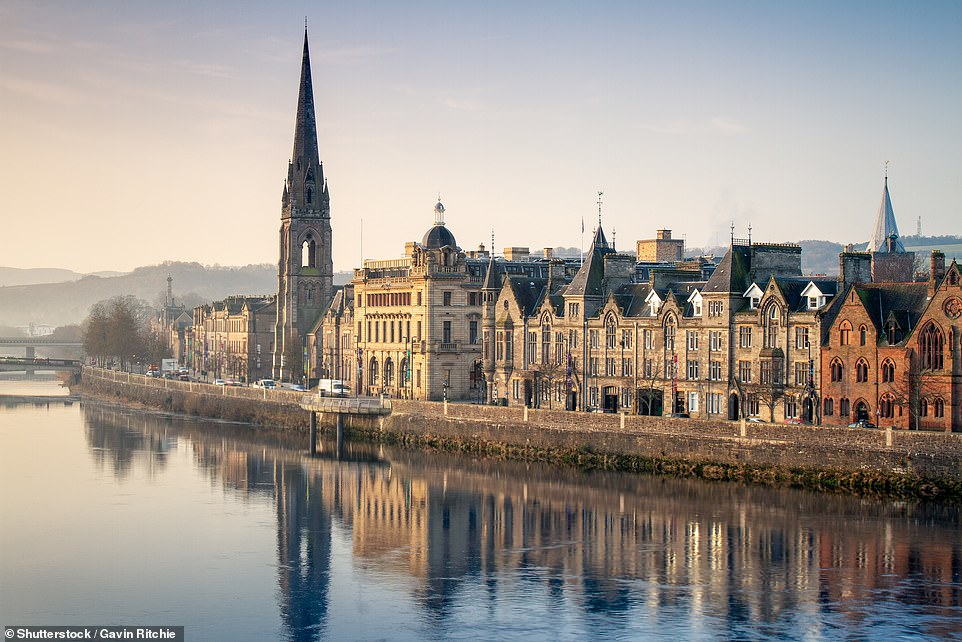 Picutred: Perth in Scotland is a popular among happy residents, according to the Rightmove survey 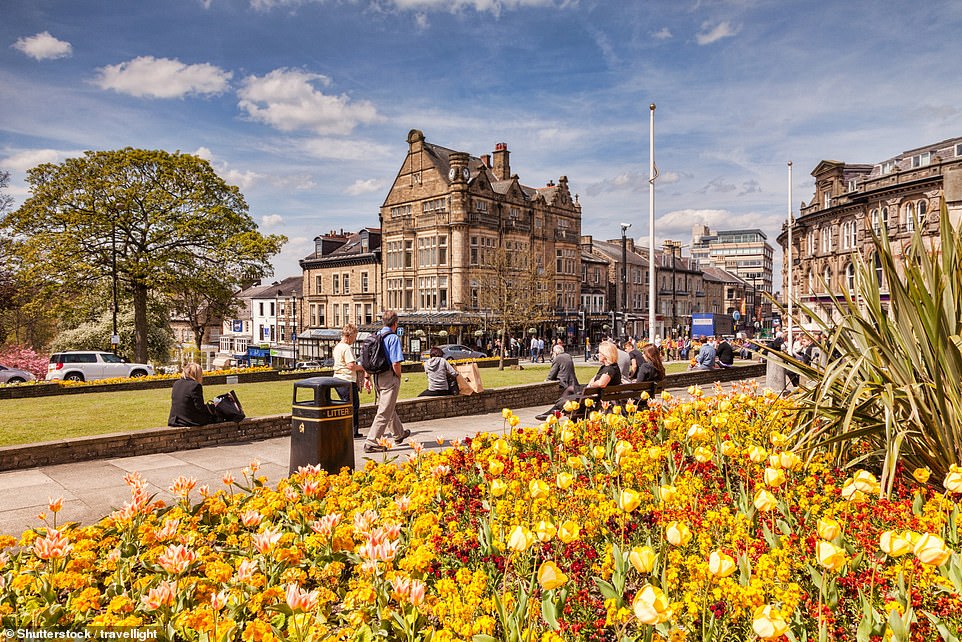 Harrogate in North Yorkshire is in the list of places where residents are among the happiest in Britain, according to the survey 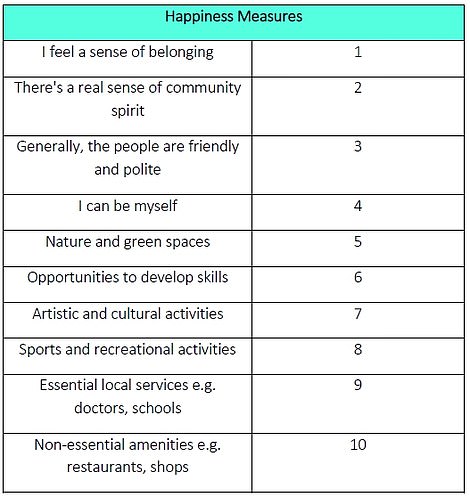 A sense of belonging was the most important factor

While there are undoubted challenges facing both buyers and renters the survey found first-time buyers are still determined to get onto the ladder, cutting back on going out and using less gas and electricity to help them to still be able to save up for a deposit.

Meanwhile, working from home or hybrid working has become a more permanent part of life this year as the survey found 65 per cent of people said they were able to work from home.

Rightmove data shows both buyers and renters have become more flexible in their search for a new home, increasing the radius of the location that they are enquiring about, with the ability to work from home a likely contributor to this.

Tim Bannister, of Rightmove, said: ‘This year’s survey really shows that the things that make people happy to live in their area are not so much the physical aspects of that area but more the personal aspects, such as our sense of belonging, the community and the people.

‘The last few months have undoubtedly been difficult for many, and as we learned during another difficult period in 2020, this is often when we look to our local area and community for support and happiness.’

Separate figures this week revealed the areas in which people can release the most cash by downsizing to a smaller home. The research by estate agents Jackson-Stops identified the best regions to downsize in across England and Wales. Leading the way was Elmbridge in Surrey, a district that includes Cobham and Weybridge, with an average equity windfall of £805,428.