Do you live on the worst road in Australia? The streets where the most crashes occur are revealed

The most dangerous streets in the country for motor vehicle accidents have been revealed.

Melbourne’s Plenty Road in Bundoora has been dishonourably named as the nation’s top accident spot for the first time, according to the 2018 National Crash Index released by insurer AAMI on Wednesday.

Springvale Road at Glen Waverley, also in suburban Melbourne, had previously held the title of Australia’s worst road for five years in a row.

In Sydney, the top vehicle accident spot is the Hume Highway in Liverpool, while in Brisbane Gympie Road in Chermside has the most collisions.

In Canberra, the Monaro Highway in Hume takes the title.

Heading west, Adelaide’s most dangerous road has been revealed as The Parade in Norwood.

In Perth, the Albany Highway in Cannington was deemed the worst.

The research shows all the accident hotspots share common features such as a high volume of traffic, multiple intersections, frequent stopping and starting, and constantly changing driver conditions.

‘When combined, this creates plenty of opportunities for small misjudgements and lapses in concentration which can lead to serious collisions,’ Ms Paterson said.

‘Concentration is key so we are urging all drivers to be mindful of safe driving behaviours when travelling on our roads, especially when they find themselves in one of these accident-prone areas.’ 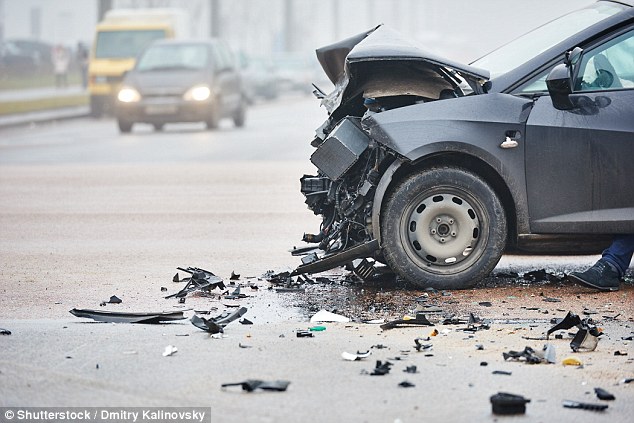 Research into driver behaviour, also conducted by the insurer, showed that drivers are still taking dangerous risks with 35 per cent admitting to texting while waiting at traffic lights

About 35 per cent admitting to texting while waiting at traffic lights and 31 per cent saying they had a conversation on the phone while holding the handset.

The data also showed that 67 per cent of drivers become angry when they see other drivers using their mobile phones while behind the wheel.

Surprisingly, 38 per cent of people don’t know that having a phone conversation on speakerphone with the handset in your lap is illegal.

‘We know mobile use is a leading cause of driver distraction and increases the chance of misjudgements and lapses in concentration, leading to traffic collisions,’ Ms Paterson said.