Do you suffer with the nightmare that is restless sleep? Smart pyjamas could give you sweet dreams

Do you suffer the nightmare that is restless sleep? Smart pyjamas could give you sweet dreams

Could ‘smart’ pyjamas help you get a better night’s sleep? That’s the theory behind a new garment designed by U.S. engineers.

‘Phyjama’ is embedded with sensors that continuously monitor heart rate, breathing and posture — factors that affect how well a person sleeps.

The researchers, who presented their results at the American Chemical Society conference, say the data could give the wearer, as well as doctors, useful information to help improve sleep patterns and even spot sleep disorders.

Getting the right amount of quality sleep can protect against stress, infections and diseases, including heart and kidney disease, high blood pressure and diabetes.

DIY: The new pyjamas, designed by scientists in America, mean people do not have to spend the night in a sleep lab in order to be assessed for health concerns

Good quality sleep also increases mental sharpness and improves decision-making. But research suggests that up to one in three people suffers with insomnia at some time, with conditions such as type 2 diabetes and ageing significantly increasing the risk.

The new pyjamas mean people do not have to spend the night in a sleep lab in order to be assessed.

The garment, developed at the University of Massachusetts, Amherst, in the U.S., has five textile patches with sensors spread around the lining of the jacket.

The patches are connected to each other via silver nylon threads covered in cotton — they are in turn linked to a tiny circuit board that forms part of one of the buttons on the pyjama top.

Four of the sensors detect pressure, such as that of a bed against the sleeper’s body, to determine movements and sleep position.

The fifth sensor picks up heart and breathing rates, which may reveal how well a person is sleeping and could help spot a sleep disorder, for example.

The breathing pattern can show if someone has sleep apnoea, where the walls of the throat relax during sleep and interrupt normal breathing. 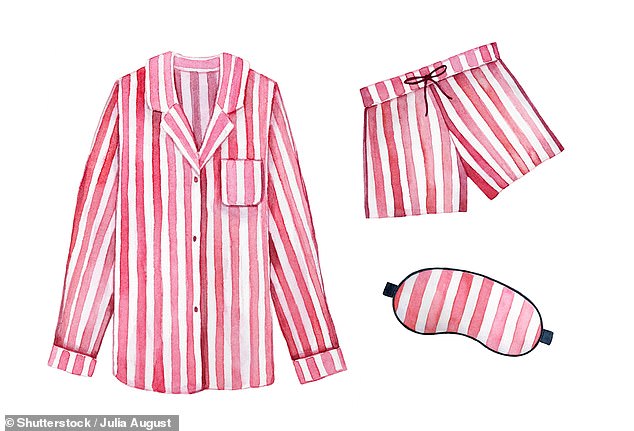 Would you buy them? The pyjamas, which are expected to cost between £80 and £160, and be available within two years, are undergoing further development.

Data from the sensors is transmitted to the circuit board continuously, and can then be accessed by the wearer or a doctor via a computer.

In recent tests with volunteers, a survey found that the pyjamas were comfortable and didn’t interrupt sleep. And the sensor readings were found to be accurate, according to independent validation.

The pyjamas, which are expected to cost between £80 and £160, and be available within two years, are undergoing further development.

They may have additional patches attached to the trousers to monitor gait, which the researchers say could be used to prevent falls in the elderly.

Jaydip Ray, an ear, nose and throat surgeon and a professor of otology and neurotology at the University of Sheffield, said: ‘Wearable sensors are fairly ubiquitous now.

‘This technology makes this inconspicuous enough to get real-life measurements that can be collected and monitored remotely, giving an accurate picture of sleep patterns.

‘The wider implications for studying sleep disorders using this technology are enormous.’