Doctor had illicit meetings with a married airman patient

Dr Julien Nash, 54, (pictured with her husband Andrew)  had a series of illicit rendezvous with a married RAF serviceman she cared for and could be struck off as a result

A woman doctor had a series of illicit rendezvous with a married RAF serviceman patient and shared kisses and intimate text messages, a tribunal heard today.

Dr Julien Nash, 54, had an improper relationship with the other man after they bonded over a shared love of wildlife whilst she was treating him at an RAF base.

Nash and the serviceman would meet up regularly over an eight-month period during which she sent him text messages – one saying: ‘I saw u too and I heard ur beep and my heart jumped because I love you.’

Another text she sent read: ‘Hello darling it was so wonderful at lunchtime.’

The romance and text messages were discovered when pictures were taken of Nash and her patient kissing each other during one of their lunch liaisons.

Dr Nash’s husband Andrew, 66, also became suspicious when he noticed a birthday message on his wife’s Facebook page which had been posted by the patient.

The matter was later referred to top brass at RAF Cosford in Shropshire where Nash worked as GP for all personnel on the base after the estranged wife of the serviceman – known only as Patient A – made a formal complaint.

Today Dr Nash, from Bridgnorth who worked as an aid worker in Nepal following the 2015 earthquake, faced a misconduct hearing in which she could be struck off.

She arrived at the tribunal hand-in-hand with her finance expert husband who is thought to standing by her.

She admitted having an ’emotional relationship’ with Patient A between September 2015 and April 2016. 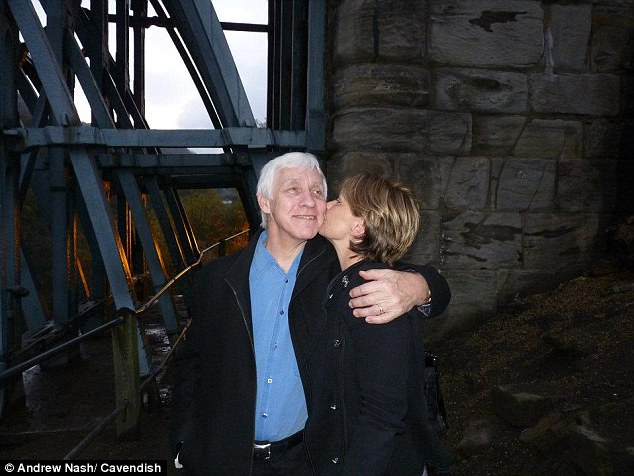 Dr Nash, pictured kissing her husband, who became suspicious  about them when he noticed a birthday message on his wife’s Facebook page which had been posted by the patient

At the Medical Practitioners Tribunal Service in Manchester Chloe Fairley lawyer for the General Medical Council said: ‘The charges relate to an improper relationship between patient A and the doctor.

‘The concerns first arose when the doctor self referred herself to the General Medical Council when she informed them that she had conducted herself in an inappropriate relationship and there had been a complaint from the patient’s estranged wife.

‘As a result, a meeting was held to discuss the complaint and she gave an account of what occurred and the General Medical Council conducted an investigation. In November 2015, she engaged in a kiss with patient A and following that she advised him that she should no longer be his doctor.

‘As part of the investigation a photograph was obtained of the two kissing and also recovered was a text message exchange. Whilst Doctor Nash had said she has ceased all contact with patient A, she had in fact seen him for appointments on the 26th of January, the 12th of April and the 3rd of June 2016.’

But giving evidence Dr Nash said: ‘When I received the complaint I had a meeting with my colonel and I was told that things like this happen in the military all the time – he was laughing and said I would be absolutely fine.

‘At the time I didn’t realise where I was, it was only when the complaint was made that I woke up and realised what had happened.

‘I was responsible for the care of military personnel and those personnel could not seek medical care from any other source. I have been trained in military medicine and also aviation medicine so you are aware of the different problems that can arise.

‘You are constantly in contact with your patients. You will see him in cafes, in the gym or in meetings so we come into contact with them a great deal and military patients may consult with us many times in a year.

‘I joined in 2008 and was expected to treat the people I was working with – some of these people were friends. Despite voicing our concerns about this we were still made to treat them. This caused stress for myself and my colleagues and in early 2015 I had to go off work with stress.

‘I felt that my professional boundaries had eroded over time and I recognised this and discussed this with my colleagues.

‘A patient and a doctor should not be kissing and I wanted to carry on with the friendship but not to pursue it in any other way.

‘It was a friendship and at the time I didn’t realise the depth of the affection that was building up. We always met in a public place and we were seen by members of staff that we knew. It was an escape for me at lunch time to go for a walk and have a conversation that was not about medicine.

‘It was so refreshing and I think towards the end I was perhaps realising my affection for him.

‘I advised him to see another doctor but it is a difficult situation because you cannot terminate the medical care because that would not be good for them. There was no breakdown of trust we developed an affection for one another organically.

‘At the time I had transferred his care to another doctor and so I didn’t see anything untoward really. We were just walking and talking and had the occasional kiss.’

‘My husband was aware that I had a patient on Facebook but when we were in Nepal he was alerted by a message and he said: ‘Oh, your friend has wished you happy birthday with a kiss,’ He was very cross about this and asked me to de-friend him immediately.’

Dr Nash’s lawyer said: ‘The two parties had a shared interest in wildlife and the patient himself indicated that they would go out for lunch and walk their dogs and talk. There was only one time they met in the evening and this was for a conservation meeting.

‘She maintains that the meeting at lunch time was to walk the dogs and on one occasion they went to a book shop and that the meetings would always happen in front of people they knew and were not covert.

‘When they exchanged a kiss she felt they had crossed a line and she asked for him to see another doctor. He couldn’t move to another practise because of the distance and he required an RAF practise.

‘He indicates that the three further visits were due to him having to see a duty doctor. There were three episodes of acute presentation when Doctor Nash saw patient A and they were all perfectly recorded with advice to see his usual doctor for a follow up.

‘There is no question of the medical care of the patient having suffered at all and there is no suggestion of that.’