Doctor pulls wriggling leech out of farmer’s nostril in China

A Chinese farmer has had a live leech removed from his nose after suffering from repeated nosebleeds, according to a hospital.

The blood-sucking worm had lived inside the 57-year-old for about two weeks when a medic pulled out the wiggling creature from him with tweezers, a report said.

The patient allegedly felt underwhelmed and complained that the leech was ‘too small’ after it had been yanked out. 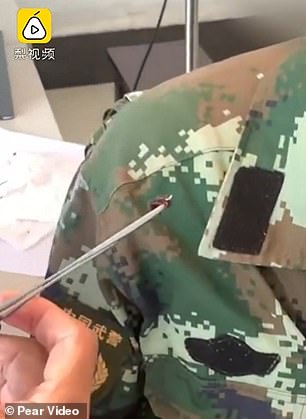 Footage released by Pear Video shows the leech, measuring three centimetres (1.1 inches) long, squirming around when a doctor plucked it out of the unidentified farmer in China

The man’s doctor believed the parasite had got into his nose after he drank contaminated water in the mountains.

Leeches can suck up to five times their body weight in blood, but they don’t grow very quickly in size.

The operation took place at a hospital in Pu’er in southern China’s Yunnan province on Friday, according to Chinese video news outlet Pear.

Footage shows the leech, measuring three centimetres (1.1 inches) long, squirming around when a doctor plucked it out of the unidentified farmer.

The patient appeared to be unfazed by the bloodsucker and even said ‘it is too small’ to the medic.

He also claimed that he had seen many leeches which were ‘much bigger’ than the one extracted from him. 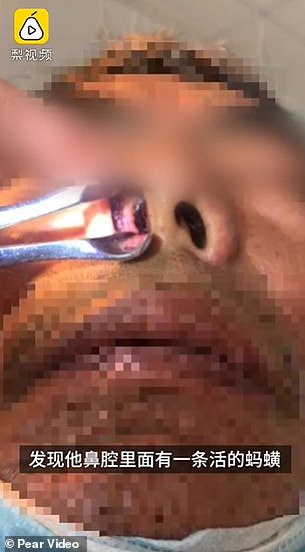 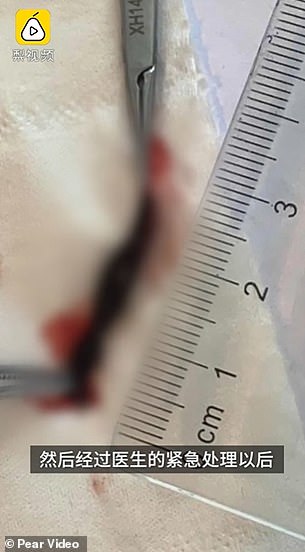 The 57-year-old man went to the hospital after suffering from repeated nosebleeds. ‘After we examined him, we discovered there was a live leech living in his nasal cavity,’ the doctor said

The man’s doctor noted the man had consumed filthy water while farming in the wild about two weeks earlier. He then started to experience recurrent nosebleeds.

‘After we examined him, we discovered there was a live leech living in his nasal cavity,’ the doctor said.

Leeches can attach themselves to a person’s skin or even inside their nose or mouth. When this happens, the person suffers from a condition called hirudiniasis, according to Mark Siddall, an expert on the parasites.

Mr Siddall is a researcher at the American Museum of Natural History in New York. In an interview with Live Science, Mr Siddall said a leech could suck as much blood as about five times its unfed body weight. However, its size wouldn’t expand fast. 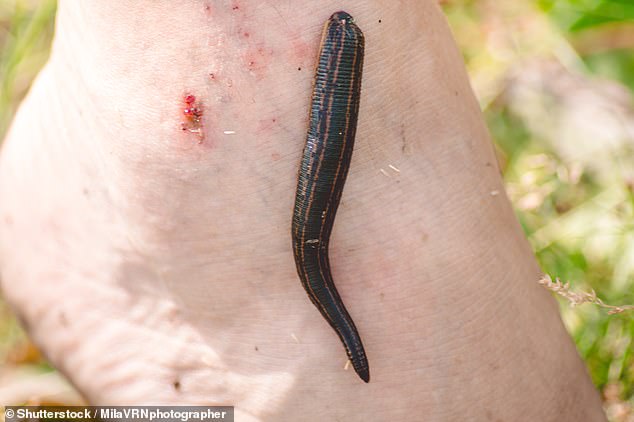 In 2014, a Scottish backpacker had a three-inch-long leech removed from her nose after suffered from persistent nosebleeds. Doctors said the leech had been living in her nose for a month before being found.

Commenting on the incident, Mr Siddall said the leech might have got into the patient’s nose while she was swimming during a trip in south-east Asia.

It was also suggested that the creature had got into the traveller’s nose through her mouth when she was drinking water.

Last month, surgeons in Cambodia reportedly removed a leech from inside an elderly man’s bladder after the creature crawled inside his penis while he was swimming.

The man, who has not been named, went to a hospital in the capital Phnom Penh on June 22 after suffering pain while trying to urinate.

Doctors inserted a camera through the man’s urethra to find the source of the pain and were shocked when they discovered a leech inside him.