A pelvic health doctor has laid bare her own harrowing experiences of childbirth in a warning to other women about the brutal realities of labor – while urging people to better educate themselves on the ins and outs of their bodies.

Dr Teresa Irwin is a self-proclaimed ‘vaginacologist’ – an expert in female pelvic dysfunctions – but has also worked as a surgeon. Over the years, the US-based medical expert has noticed that patients’ health issues are often linked to lack of education on how to treat their bodies.

So the good doctor now takes to TikTok to share her knowledge with her 91,000 followers in a series of educational videos about everything from vaginal health to childbirth, regularly leaving her followers stunned by her shocking revelations.

In a recent clip Dr Irwin tackled the topic of birth, sharing her own traumatic stories – including breaking her own waters and snapping her tailbone, during separate births.

The medical expert began by addressing the birth of her second child, explaining that she arrived at the hospital to deliver her baby – having been induced the day before. 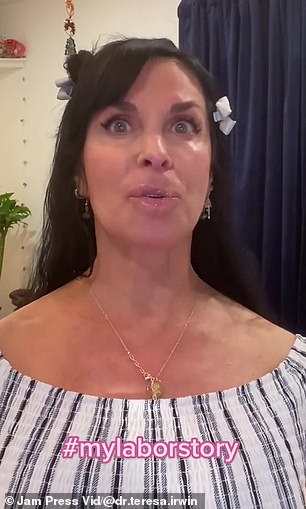 But when she arrived, she says her doctor refused to break her waters, because he insisted that the birth should be ‘natural’, even though Dr Irwin had already been induced and was planning to have an epidural.

‘For my second and third deliveries, I had an old-fashioned obstetrician,’ she explained.

‘I show up to labor delivery, I had been induced the day before. And when [my obstetrician] checked me, he said I had a bulging bag of water.

‘And I’m like, “Great, why don’t you break my bag of water.” And he’s like, “Errr no I want this labor to go naturally.”

‘He didn’t argue, he simply went off to see another patient.’

Frustrated with the doctor’s lack of action, Dr Irwin decided to take it upon herself to break her waters.

‘My husband was asleep and the nurse was seeing another patient so I decided to take matters into my own hands, or my fingers,’ she recalled.

‘So I opened up my legs, reached my fingers inside of my vagina and broke my bag of water. And guess what? Within one hour I was fully dilated [and] ready to push.’

However, while her experiment did work out, Dr Irwin added: ‘Now I don’t advise that for anybody else to do.’

The mom said her first birth was ‘by far’ the most painful. 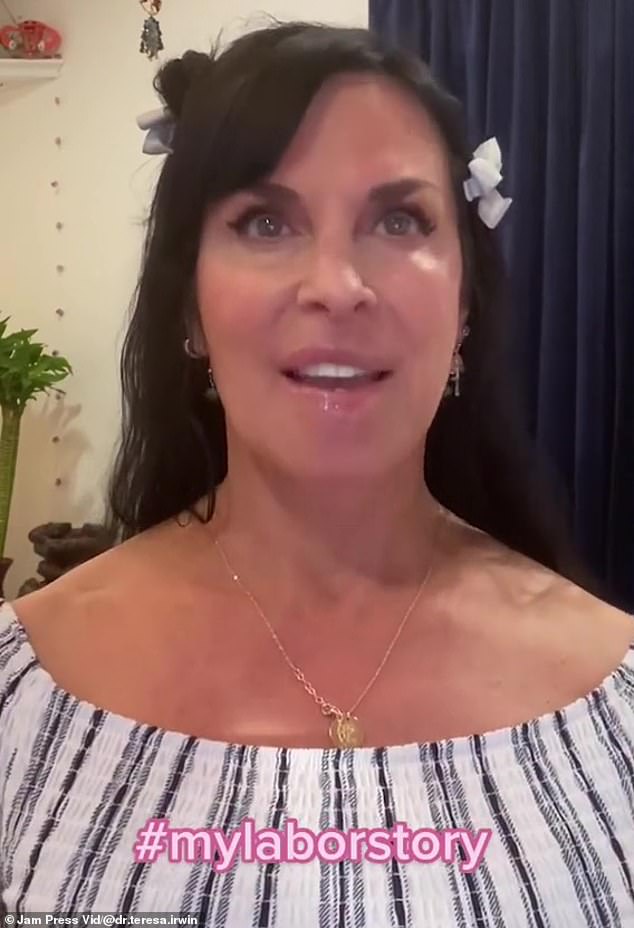 In a viral TikTok video, Dr Teresa Irwin revealed she was forced to break her own waters during the birth of her second child – and snapped her tailbone while delivering her third 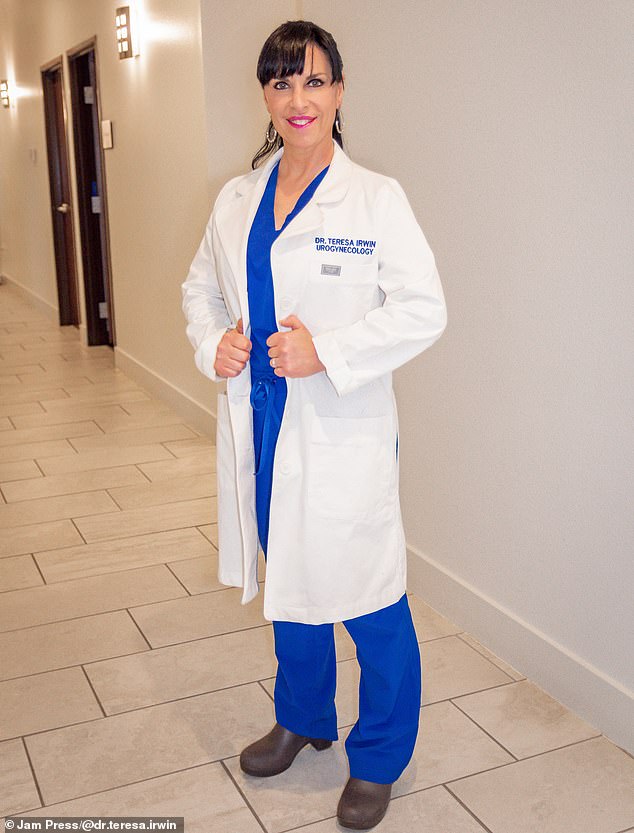 The US-based doctor shares advice and tips about healthcare on her account, explaining that the majority of patients she sees have little knowledge about their own bodies

‘I did not have any pain medication for the first eight hours of the induction of my labor, which is much more painful than when you go into labor naturally,’ Dr Irwin told NeedToKnow.online.

In another clip, the doctor opened up about her third child’s birth – during which she broke her tailbone because her baby’s head was so big.

She said: ‘I was 5cm and that’s kind of a magic number for me for my waters to be broken.

‘And I convinced my old-fashioned obstetrician to break my back water and guess what, lo and behold, within the hour I was fully dilated.

‘I then began to push… We’re taught when we push to pretend that we’re really, really constipated and you’ll be a little bit more effective.

‘And so therefore I kept that in mind, I’m really experiencing the constipation and I push him out in one push.

‘And guess what? Because he’s got a big head he broke my tailbone on the way out.’

After breaking her tailbone, she had to rest for six weeks. 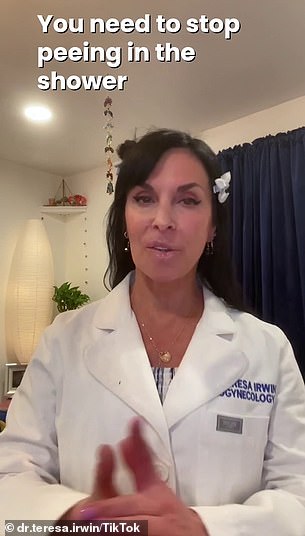 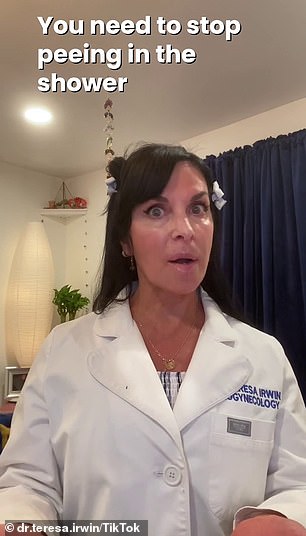 She said: ‘I was not one the most compliant patient, and started working out on the recumbent bike after two weeks.’

As for breaking her own waters? Interestingly, Dr Irwin said it was a ‘relief’.

The medical expert previously stunned her followers when she shared a video in which she explained why you should never pee in the shower – noting that if you make this a regular habit, your body will begin to associate the sound of running water with the need to go to the bathroom.

‘You don’t want to do it all the time because what happens is every time you hear the sound of water your bladder is going to want to pee – because it’s used to hearing the sound of the water in the shower,’ she explained.

‘So whenever you’re washing your hands, washing the dishes, your bladder is going to be salivating so to speak because it wants to go and pee.’