Doctor reveals how you can DELAY the menopause

While many would associate hot flushes with being a symptom of the menopause, a doctor has revealed the unexpected physical and psychological effects many women may not know.

Dr Philippa Kaye, from London, has been a GP for over a decade in both the NHS and private sectors – and has a particular interest in women’s, children’s and sexual health.

After her general practice was filled with women seeking help for menopausal symptoms, or those not realising that their symptoms could be related to the menopause, she decided to write The M Word: Everything You Need To Know About The Menopause.

The book, which is out today, offers a one-stop guide to the perimenopause and menopause, covering everything from understanding unusual symptoms – including saggy skin and breast changes – to tips on how you can delay the menopause.

These include stop smoking, eat oily fish, ensure you’re taking enough vitamin C, and a new surgical procedure which involves having a piece of one ovary removed and frozen until the menopause starts.

Dr Philippa Kaye, from London, who has been a GP for over a decade, has written a one-stop guide to the peri-menopause and menopause. Pictured, stock image

Dr Philippa Kaye says that while it’s common to have joint aches and pains due to age or lack of fitness, they can also be related to the menopause.

She goes on to explain that they most commonly affect the neck, shoulders, elbows, wrists and knees, and are worse in the morning but tend to ease as the day progresses.

Dr Philippa Kaye advises that while you should continue exercising to prevent making other symptoms worse, you should avoid any forms of exercise that may put additional stress on the painful joints.

HOW CAN YOU DELAY THE MENOPAUSE?

Most of the factors that determine the timing of the onset of your menopause are set and unchangeable. After all, you can’t go back in time and put more follicles into your ovaries. However, that doesn’t mean that there is nothing that you can do:

◆ Stop smoking. Yes, you knew that I was going to say that – I am a doctor, after all! Of the myriad adverse effects that smoking has, one of them is that it can bring the menopause on earlier. On average, women who smoke go through the menopause approximately two years earlier than those who don’t.

Smoking doesn’t just affect your lungs, it affects your heart, brain and increases the risk of multiple cancers all over the body.

Smoking helps fur up the arteries of the body, by being involved in a complex process called atherosclerosis, and narrowed, furred up arteries mean a reduced blood and therefore oxygen supply to your organs – and that includes the ovaries, leading to an earlier menopause.

It can also make the symptoms of the menopause worse, though more on that later. Even regular exposure to second-hand smoke can lead to an increased risk of a slightly earlier menopause, so get nagging whoever it is to stop!

This study followed over 14,000 women, nearly 1,000 of whom went through the menopause during the four-year period of the study.

Not only did it show that eating oily fish and legumes delayed the menopause, but for each increase in the amount of oily fish they ate the later it was, when compared with women who ate more rice and pasta.

Oily fish such as salmon, trout, mackerel and sardines are rich in omega-3 fatty acids which have multiple health benefits.

In this study it was shown that women who ate a vegetarian diet, despite having fresh legumes, had an earlier menopause than those who regularly ate oily fish.

This may be that oily fish and legumes contain antioxidants which help prevent damage to the ovaries, though this is not conclusive. Eating at least two portions of oily fish a week with plenty of legumes is a healthy option in general and may affect the timing of your menopause. Worth a try!

This doesn’t mean that a diet high in calcium and vitamin D would delay the menopause and interestingly taking a calcium or vitamin D supplement doesn’t seem to make a difference, so perhaps it is something else found in dairy.

◆ A new surgical procedure was reported in August 2019, whereby women have a piece of one of their ovaries removed in their 20s or 30s, which is then frozen until the women reach the menopause.

At that point, the ovarian tissue is transplanted back and essentially starts working again, therefore delaying the menopause for a number of years. This is not a routinely available surgery, there is not evidence as yet for its efficacy and it doesn’t delay the menopause indefinitely.

Extract from The M Word: Everything You Need To Know About The Menopause by Dr Philippa Kaye

‘HRT is effective in managing joint pain symptoms,’ the expert added. ‘See your doctor to rule out other causes.

‘Some women are incorrectly diagnosed with arthritis around the time of the menopause as the signs and symptoms can be similar.’

Oestrogen has various roles in the skin – including where fat is deposited and control over the pigment-producing cells of the skin. 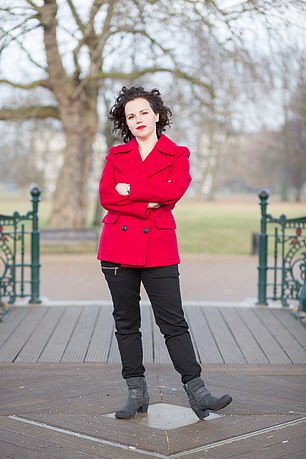 Dr Philippa Kaye (pictured), from London, has been a GP for over a decade

‘As oestrogen levels fall, fat distribution changes, with more fat being deposited in the tummy, bottom and thighs,’ explained the doctor.

‘This means that there is less fat to support the skin in the face, neck, chest, and hands which often then become more saggy and wrinkles appear.’

The expert advises applying sunscreen every day no matter what the weather, and to regularly apply moisturiser to ensure your skin is kept hydrated.

She suggests those with itchy and dry skin should swap soap for an over-the-counter emollient instead – as it will help to put moisture back into the skin, easing symptoms of itching.

Dr Philippa Kaye warns that during the perimenopause, women’s breasts may not only become tender and painful, but may also change shape.

She proceeds to explain they can get smaller, sag, or become softer from week-to-week – and it’s all due to the irregular ovulation during the perimenopause, which results in breasts being exposed to hormones such as progesterone, which can make them both sore and tender. 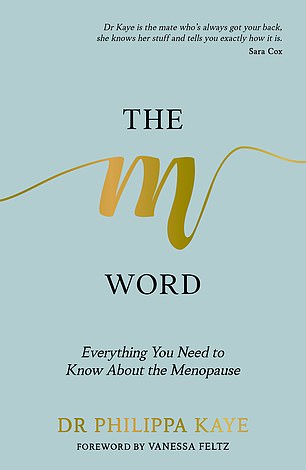 The M Word: Everything you need to know about the menopause (pictured), by Dr Philippa Kaye, is out now

But Dr Philippa explains that after the menopause, the reduction of oestrogen can have an impact on the actual breast tissue.

The expert offers different advice depending on the symptom.

For pain, she suggests wearing a well-fitting and supportive bra, wearing a soft bra at night, and rubbing in an over-the-counter non-steroidal anti-inflammatory pain-relieving gel.

However, with changes in shape and firmness she suggests exercises, such as push ups, which can help the appearance of breasts.

Meanwhile, the doctor also adds that plastic surgery which involves lifting the breasts could be a more pricey and dramatic alternative.

Dr Philippa highlights that approximately a third of women will develop some form of hair loss following the menopause – particularly around the crown and temples – and pubic hair can also become sparser or thinner.

She explains it’s because oestrogen has a big impact on the hair’s growing phase, so when the levels fall, the hair cannot grow as long as previously before falling out.

The doctor advises avoiding anything that could further weaken or damage the hair – including the likes of hair dyes, appliances which add heat and even tight hairstyles, such as braids.

Palpitations – which are an awareness of your heart beat, which can be faster or at its normal rate – are connected to the perimenopause as a result of declining oestrogen and progesterone levels.

‘Dr Philippa continued: ‘HRT is effective in managing palpitation symptoms. But even if you are not using HRT or others treatments there are medications which can help with palpitations related to the perimenopause, for example, beta blockers.’

She continued that factors which may make palpitations worse include: Smoking, alcohol, caffeine, monosodium glutamate – which is found in some Chinese food and processed foods and meat.