Doctors are voicing their outrage over the government’s move to have the military’s Blue Angels and Thunderbirds perform more flyovers to salute healthcare workers at various cities across the country, saying it’s a waste of millions of dollars.

The Air Force Thunderbirds and the Navy’s Blue Angels have performed in several cities including Chicago, Detroit, New York, and Nashville in an effort to boost morale and pay tribute to frontline workers.

But an ER doctor, who goes by Dr. Bill, has slammed the federal government for spending an estimated tens of thousands for each flyover instead of providing vital personal protective equipment to hospitals in need.

So far the two squadrons have performed at least 92 flyovers in various cities. If each show lasts an hour and costs $60,000 an hour as reported by the Washington Post, that amounts to over $5.5million spent by the government so far as of Sunday.

‘I’m Dr. Bill. I’m as patriotic as the next guy but I read today they’re going to have the Blue Angels and other Air Force flying wizards flyover many cities for healthcare workers to show their support,’ he said in a video clip shared on May 12 following news of a flyover in Chicago.

Viral video has emerged of a medic named Dr. Bill slamming Blue Angels and Thunderbird flyovers for healthcare workers as a waste of money saying, ‘Get us equipment. Get us PPE’ 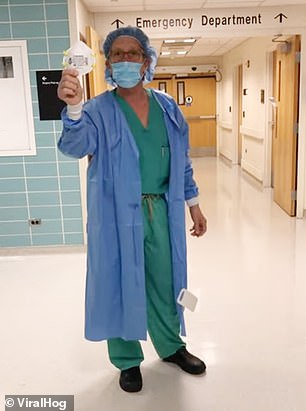 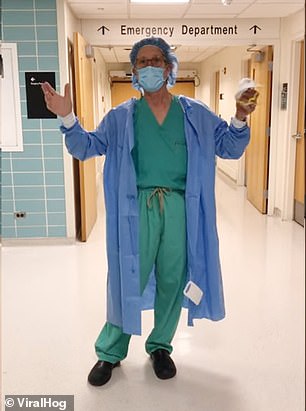 The outraged doctor was filmed in a hallway at his hospital, pictured wearing a face mask and a protective lab coat as he slammed the government spending on flyovers instead of hospital needs. ‘You want to help healthcare workers? Get us equipment. Get us PPE,’ he said 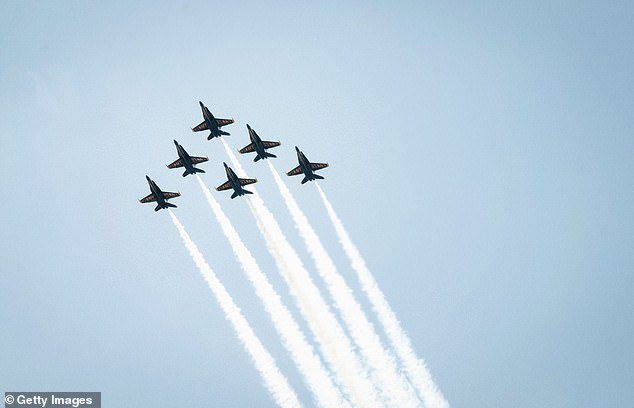 So far the Blue Angels and Thunderbirds have performed over 90 flyovers in dozens of cities. The Blue Angels pictured flying over downtown Nashville, Tennessee on May 14

The outraged doctor was filmed in a hallway at his hospital, pictured wearing a face mask and a protective lab coat as he slammed the government spending on flyovers instead of hospital needs.

He estimated that each flyover cost $450,000 to fund, though that number hasn’t been verified.

‘You want to help healthcare workers? These are the damn N-95 masks we have to deal with, these are painters masks. Get us equipment. Get us PPE. Get us N-95 that are work anything. Get us tests for everybody. Okay?’ he said shaking his mask.

‘You want to help healthcare workers, take that same money and feed the people in the inner city who have nothing to eat. Help the food care workers who are working. Help the food industry people. Don’t flyover and say oh aren’t they great? Let’s be real,’ he said.

On May 12 the Blue Angels raced through the skies of Chicago, Detroit and Indianapolis giving daring performances that drew crowds and applause for frontline workers.

The Navy and Air Force say the flyovers come at ‘no additional’ cost to taxpayers because ‘pilots must execute a minimum number of flight hours to maintain proficiency.’

However, the millions spent on the flyovers raises questions to how the sum could have been spent to provide $20,000-ventilators and vital PPE to hospitals. 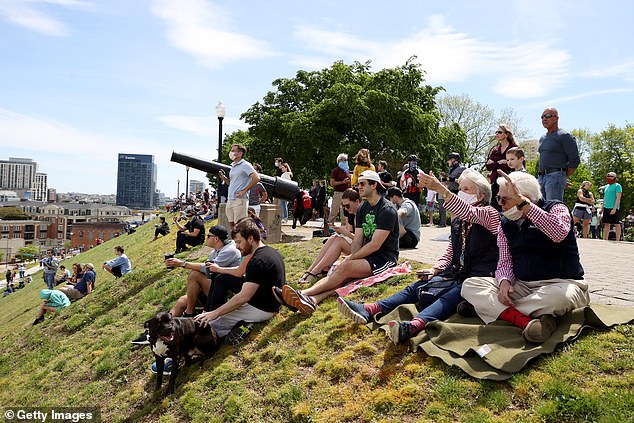 People sit on a hill while watching the Thunderbirds and Blue Angels preform a flyover on May 2 in Baltimore, Maryland. 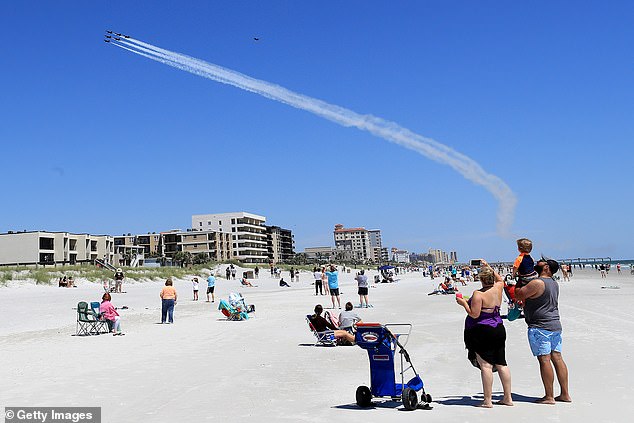 People watch the U.S. Navy Blue Angels perform a flyover on May 8, 2020 in Jacksonville, Florida in a tribute to healthcare and frontline workers 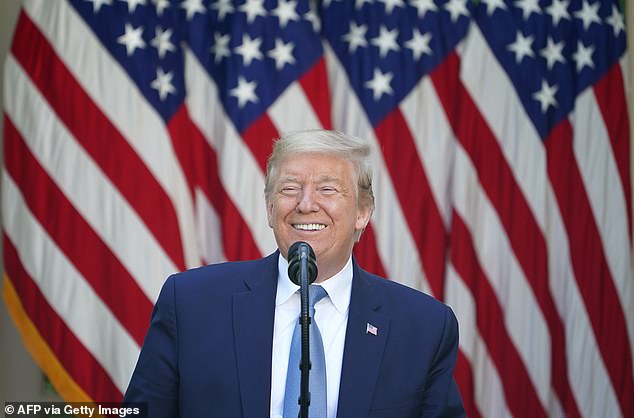 ‘This is a tribute to them, to our warriors because they’re equal warriors to those incredible pilots and all of the fighters that we have for the more traditional fights that we win,’ President Donald Trump said in April on the flyovers

‘This is also our way of showing that we are all in this together and that America’s spirit will prevail,’ Air Force Gen. Dave Goldfein said in a news release on the flyovers.

The flyovers are organized by the Department of Defense in a campaign to keep ‘American strong’ in a ‘collaborative salute’.

‘This is a tribute to them, to our warriors because they’re equal warriors to those incredible pilots and all of the fighters that we have for the more traditional fights that we win,’ President Donald Trump said in April on the flyovers.

Today there are over one million cases of the virus in the country and over 89,000 deaths.

However, hospitals across the country are still suffering from dire shortages of protective personal equipment as the number of COVID-19 cases continue to rise. 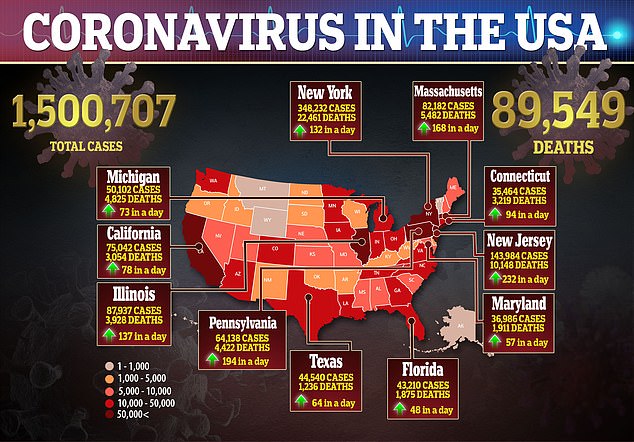 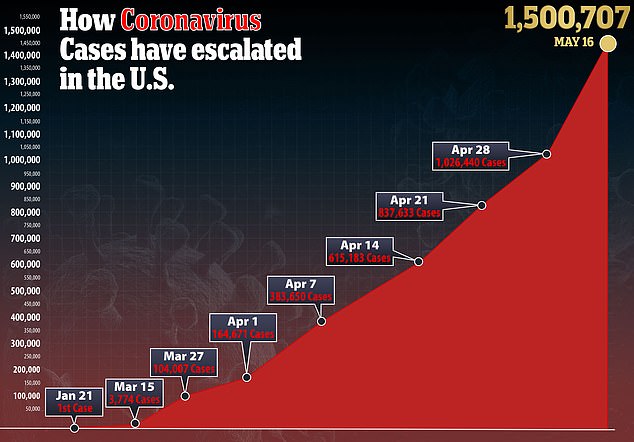 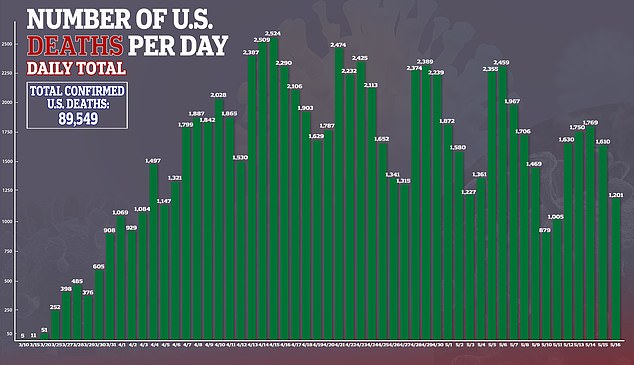 Late last month health care professionals in 10 states filed complaints over a lack of PPE with the Occupation Safety and Health administration and exposure to the virus, according to Newsweek.

Some 6,169 hospitals, healthcare and other facilities including nursing homes made PPE requests through volunteer organization GetUsPPE asking for N95 respirators, surgical masks, gowns and face shields, shedding light on the shortage plaguing health facilities, according to a new Lancet report.

Requests came in from all 50 states.

The U.S. Department of Health and Human Services (HHS) estimated in early March that the US had roughly one percent of the 3.5billion N95 masks needed to manage a full-blown COVID-19 pandemic.