A doctor has turned the tables on thieves who targeted his car by releasing up-close video of the crooks responsible.

Shriram Rabinthiran was furious to discover the criminals had jacked up his car and stolen the catalytic converter while it was parked at the hospital where he works.

But Dr Rabinthiran may have the last laugh after discovering the crooks had triggered a rear-facing camera which captured their every move.

The medic, who works at St Peter’s Hospital, Chertsey, Surrey, edited the footage to show freeze frame close-ups of the men’s faces and tattoos.

He promptly passed the footage to the police and posted it on social media in a determined bid to track the pair down.

Dr Rabinthiran uploaded the clip to Facebook on May 8 with the caption: ‘On Friday 3rd May 2019, I had parked at St Peter’s Hospital in the staff car park in the morning.

‘When I came back to the car around 12:40pm, I found out that my catalytic converter had been stolen.’

He added: ‘This is a rising crime in parts of London where they jack the car up and saw away the parts they need – later selling it for scrap metal.

‘I knew my car was being targeted particularly as it was a 2008 Toyota Prius. I was expecting this to happen sooner or later as it had happened to a few people I knew with Prius cars.

‘I’ve got a dashcam fitted in my car and luckily it had been triggered when they jacked my car up to cut the catalytic converter out.

‘Apparently this happened to someone the week before me too. I’m sure they make a career out of doing this at random car parks.

Sacha Light wrote under Shriram’s post saying: ‘How have people actually got the ability to do that. Jesus nothing is sacred not even working for the NHS.’

Rachel Keegan added: ‘So sorry to hear this, especially when it happens to someone who works for our wonderful NHS.

‘My Mum died in St Peter’s at the end of last year and I cannot fault the care she received there.’

Jo Mc Nulty said: ‘Wow. Unbelievable. I’m so sorry this happened to you. I really hope that they get caught. What utter…Scum of the earth.’

A spokesman for Surrey police said: ‘No arrests have been made at this time. On Friday 3rd May, a car owner had been parked at St Peter’s Hospital in Chertsey. On arriving back at the car he found that the catalytic converter had been removed. 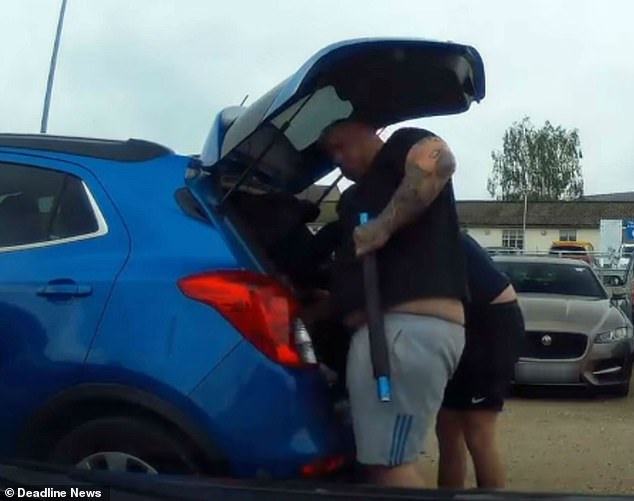 Footage was edited to show freeze frame close-ups of the men’s faces and tattoos. Dr Rabinthiran promptly passed the footage to the police and posted it on social media in a determined bid to track the pair down

‘We’re aware of the full video being shared in other groups and we’d like to speak to these two male occupants of a blue Vauxhall Mokka in relation to the allegation.

‘There have been other incidents of catalytic converter theft at the hospital and also at Thorpe Park and we’re keen to link those reports to this master occurrence.

Last month a three men were caught on camera stealing a catalytic converter from a silver Toyota Prius in Leytonstone, East London at the same time new figures were released showing this type of theft had increased.

The Metropolitan Police recorded that 174 catalytic converters were stolen in 2017 in the capital which rose to 1,484 last year.

It is believed the type of theft has increased, due to the high level of precious metals -rhodium, palladium and platinum- are inside the car that command a high market value.

What are catalytic converters and why do thieves want to steal them?

Modern cars are fitted with catalytic converters to reduce harmful emissions of hydrocarbons, carbon monoxide and nitrogen oxides into the atmosphere.

They contain a ceramic honeycombed core coated with metals such as platinum, palladium and rhodium.

The metals act as catalysts and convert the harmful gases into water vapour and less harmful emissions.

Criminals are ripping out the anti-pollution devices from cars and vans because they contain increasingly precious and sought-after metals such as platinum and palladium – leaving motorists with repair bills of thousands of pounds.

The police and AA say that to help foil the thieves, catalytic converters can be uniquely marked in acid with a serial number.

Motorists are advised to keep their cars in garages or park in well-lit areas. Most converters are bolted on – but they can also be welded.