Doctors and nurses joined Extinction Rebellion protesters today as ‘stretched’ police call in backup from Scotland – and warn that protests are impeding their ability to attend to other crime.

More than 100 healthcare professionals have joined the sixth day of climate change protests in London. Doctors, nurses and medical students were among those demonstrating at Jubilee Gardens, near oil giant Shell’s London HQ, on Saturday in the ‘Health March for the Planet’.

Extinction Rebellion activists are also marching in a funeral procession down Oxford Street in a ‘grief march’ to remind people what has been lost due to climate change.

Up to 100 officers are being sent from Scotland to London to assist help London authorities with the climate change demonstrations.

Alex Turner, 36, a paediatric and emergency doctor from Bristol who was wearing his blue scrubs and stethoscope at the protest, said: ‘We are meeting outside Shell because they are one of the biggest companies involved in the oil and energy industry, and they have real power to decarbonise that industry.

‘We are protesting illegal levels of air pollution.’ 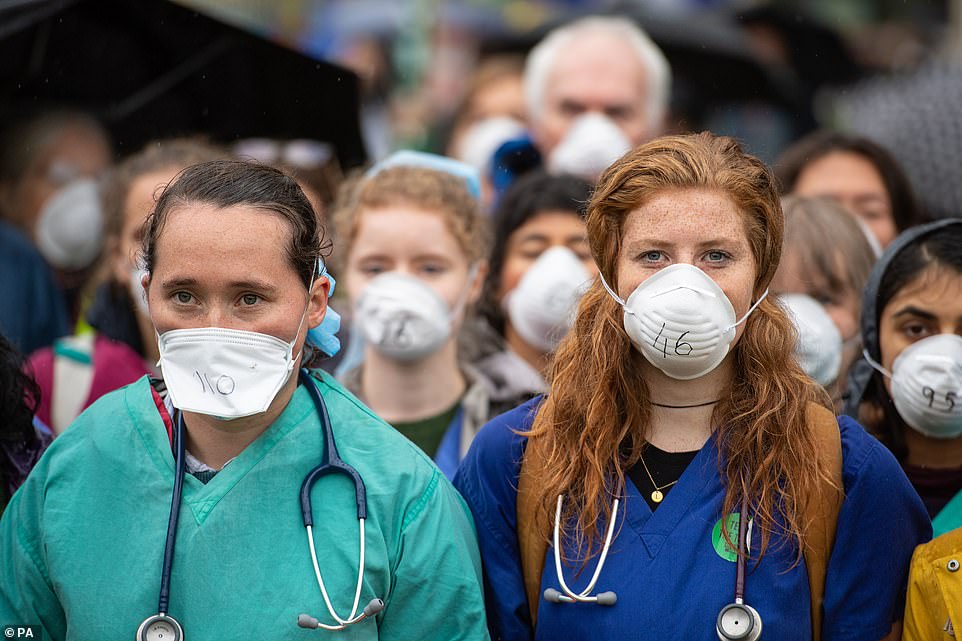 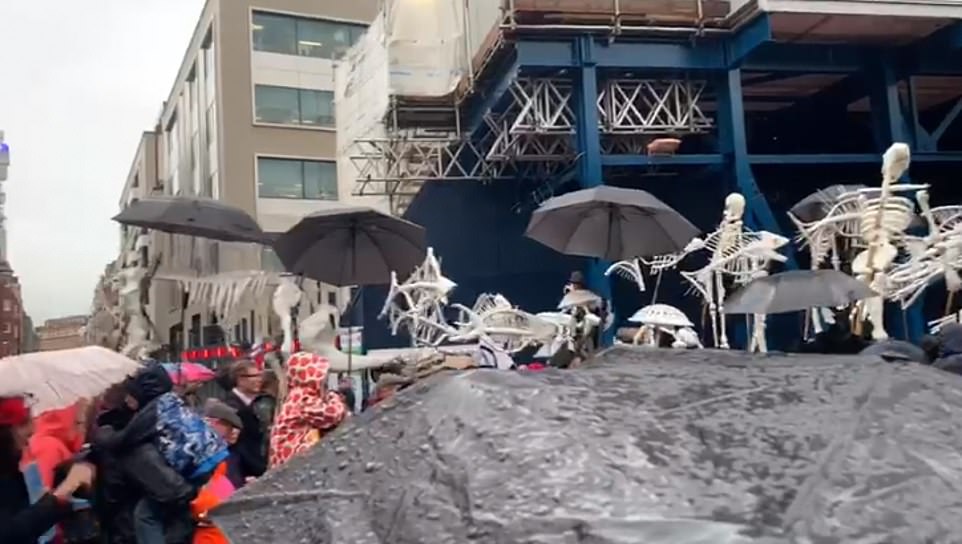 A ‘funeral procession for the planet’ was held in London today as ‘stretched’ police confirmed nearly 1,300 people have been arrested in connection with the ongoing demonstrations 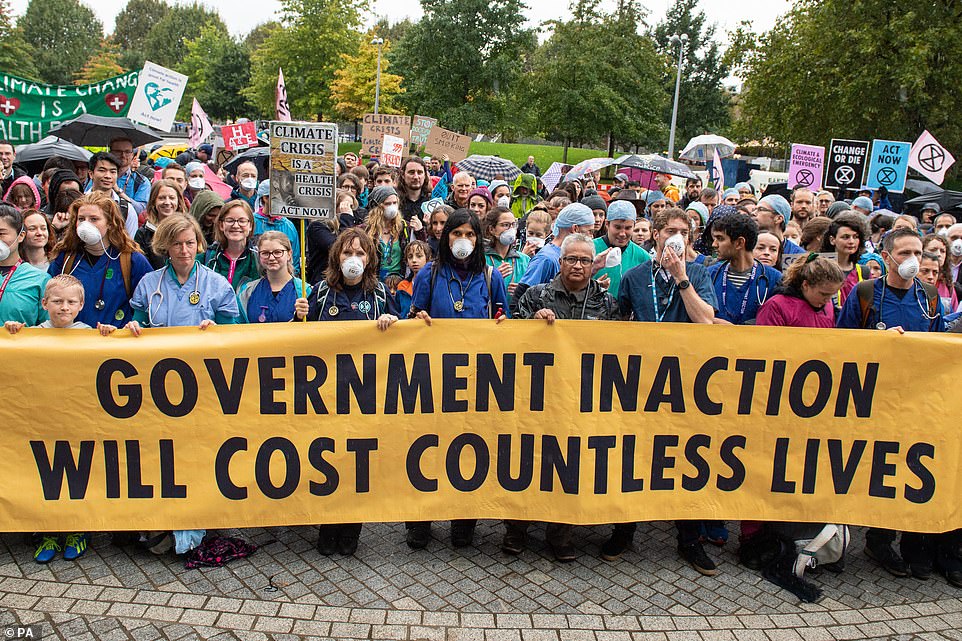 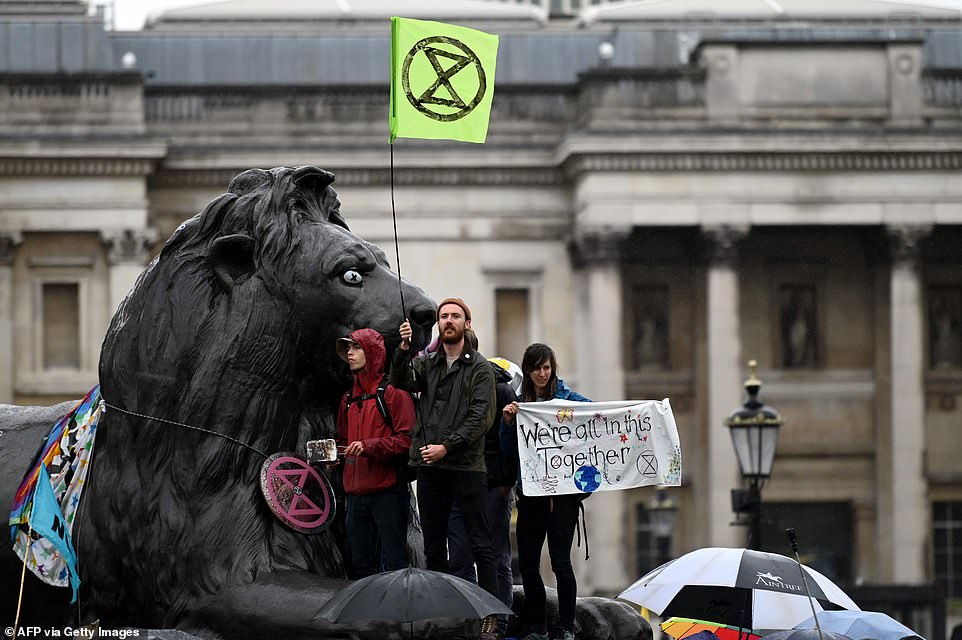 Officers from Scotland will be deployed from early next week after Police Scotland Chief Constable Iain Livingstone approved the request from the National Police Co-ordination Centre on behalf of the Met (pictured: Climate activists protest on Trafalgar Square) 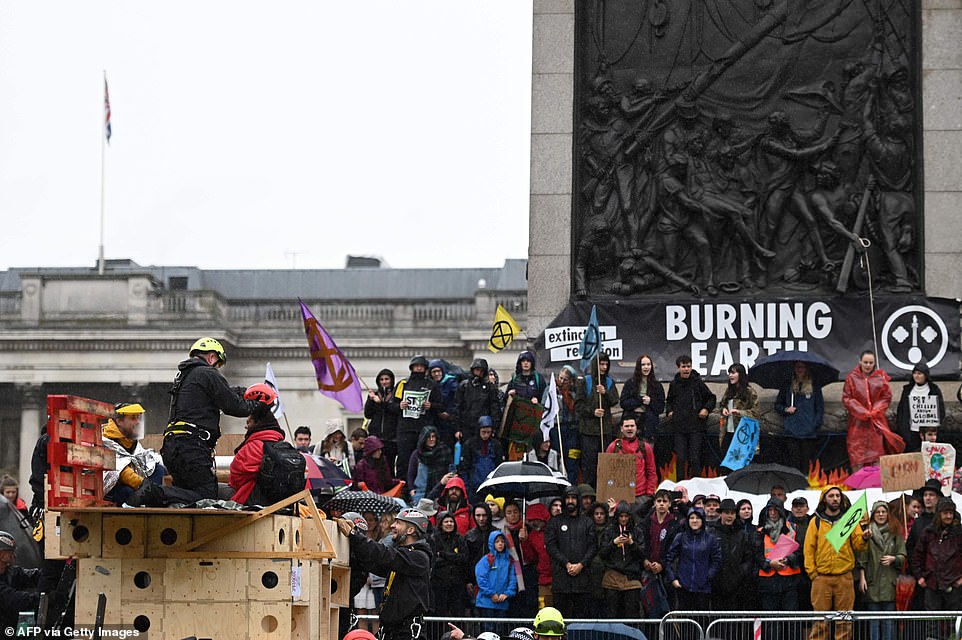 Scotland Yard’s latest figures show 1,290 arrests have been made so far in connection with Extinction Rebellion protests in the capital this week

Another protester said raising awareness about the effects of climate change on health is part of their ‘duty of care as healthcare professionals’.

Scotland Yard’s latest figures show 1,290 arrests have been made so far in connection with Extinction Rebellion protests in the capital this week.

Belgium’s Princess Esmeralda was among those arrested after she joined a sit-in protest in Trafalgar Square on Thursday.

Princess Esmeralda Dereth, the daughter of the late Leopold III of Belgium and his second wife Lilian Baels, Princess of Rethy, says she was taken into a police van for questioning and held for around five hours.

The 63-year-old said in a Twitter post: ‘Today along with many other protesters I was arrested and put in police custody. The climate emergency calls on all of us to put pressure on governments to act with urgency.’ 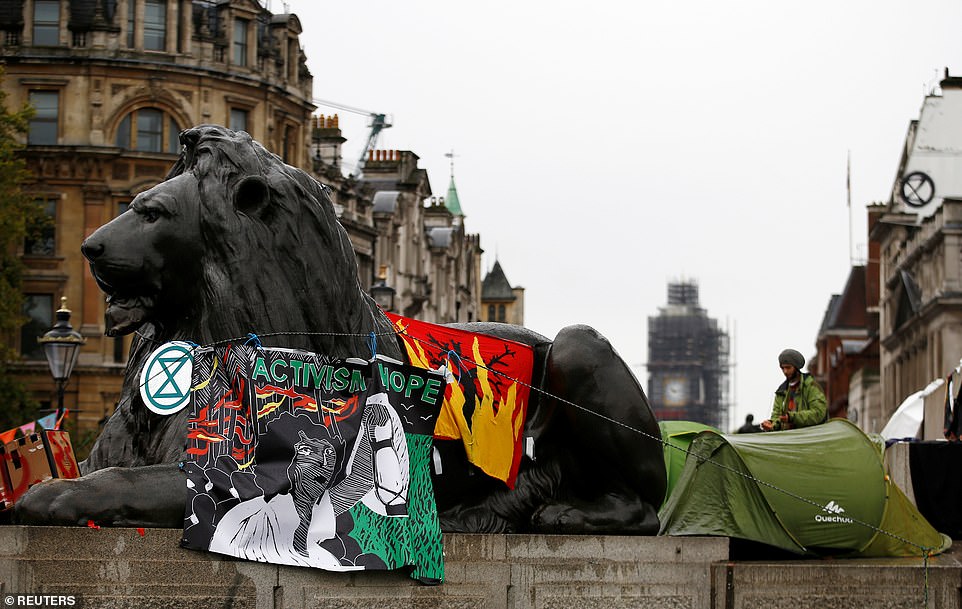 Protesters’ camp at Trafalgar Square is seen during an Extinction Rebellion demonstration in London, October 12

Earlier on Saturday, police arrested members of Animal Rebellion after they staged a demonstration at Billingsgate Fish Market in Poplar, London.

The Metropolitan Police said 23 arrests had been made at Billingsgate as of 9.30am.

A spokesman said 22 of those arrests were for failing to comply with a condition imposed under Section 14 of the Public Order Act 1986.

One person was also arrested for aggravated trespass, the Met said.

As many as 100 public order officers are being deployed from Scotland to London to assist the Metropolitan Police with the climate change demonstrations. 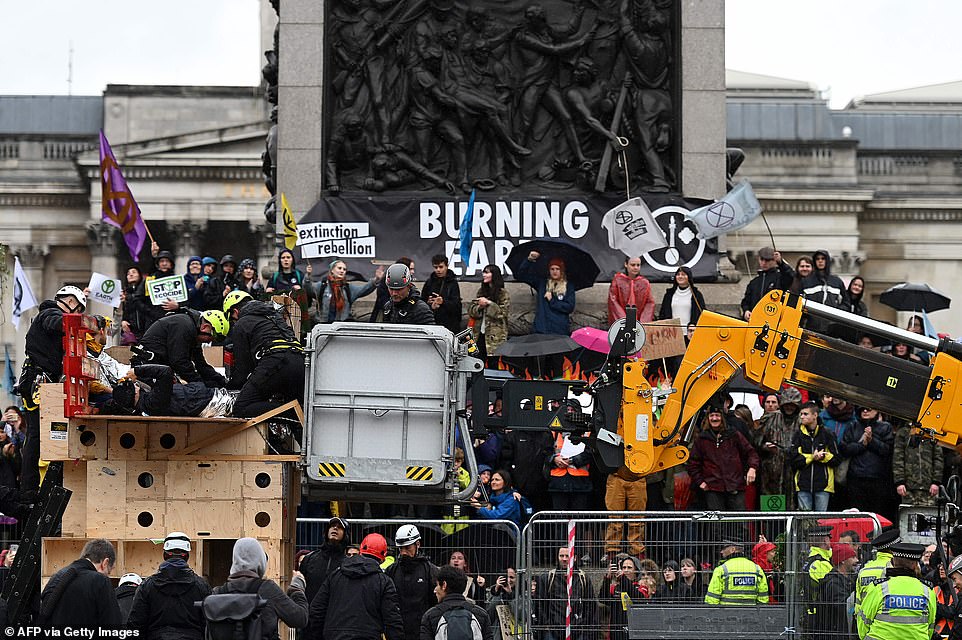 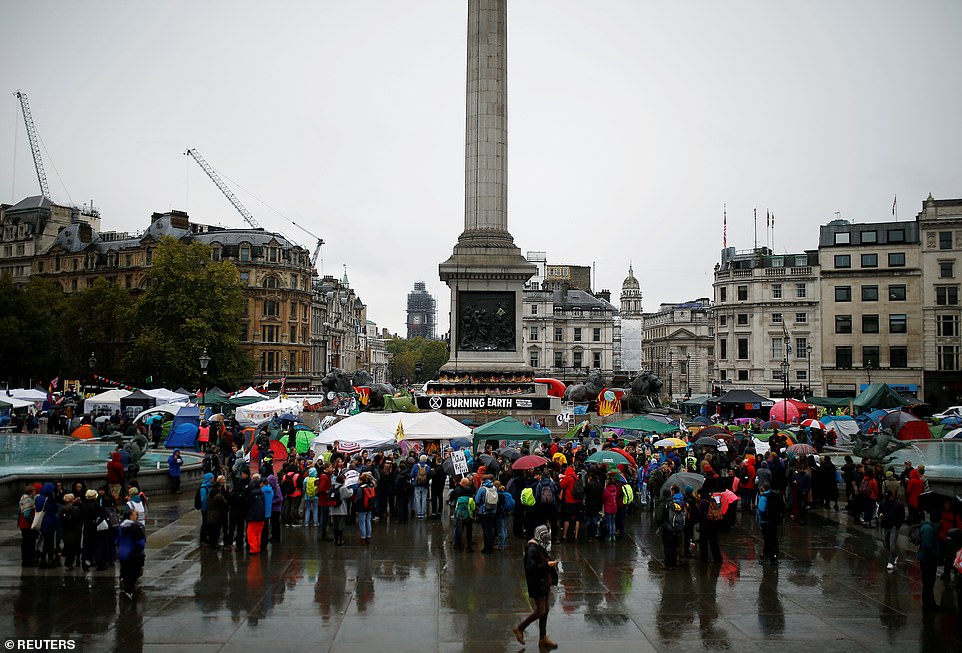 Met Police chief Cressida Dick said on Friday the force has been ‘stretched’ by the protests, impeding its ability to respond to other crimes (pictured: Protesters gather at the Trafalgar Square today) 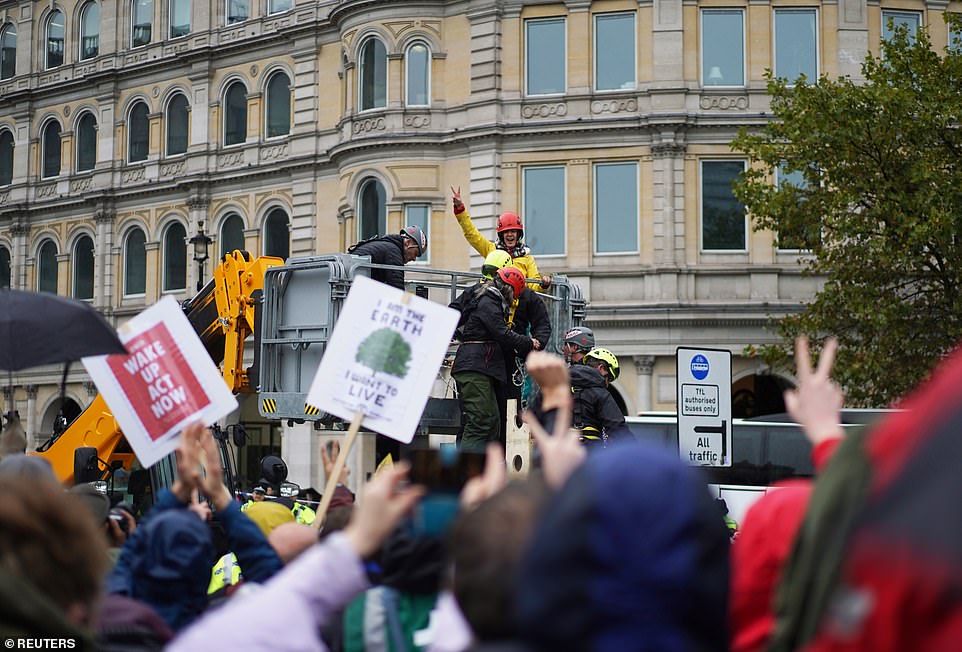 Police remove protesters at the Trafalgar Square during an Extinction Rebellion demonstration in London, October 12 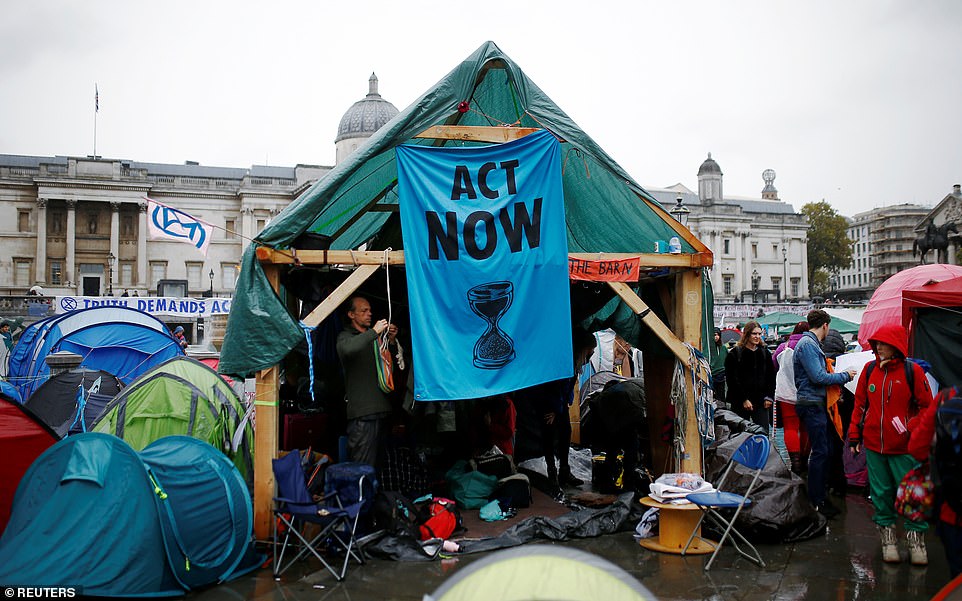 Protesters camp at the Trafalgar Square during an Extinction Rebellion demonstration in London, October 12, 2019

They will be deployed from early next week after Police Scotland Chief Constable Iain Livingstone approved the request from the National Police Co-ordination Centre on behalf of the Met.

Met Police chief Cressida Dick said on Friday the force has been ‘stretched’ by the protests, impeding its ability to respond to other crimes.

Mr Livingstone, who has briefed Scotland’s Justice Secretary on the move, said it would not undermine Police Scotland’s ability to protect the public in Scotland.

He said: ‘I have agreed to send a number of officers for a short time to assist with the policing of the Extinction Rebellion protests currently taking place in the city.

‘The Scottish Police Federation is engaged in this process and the safety and welfare of my officers and colleagues is paramount. 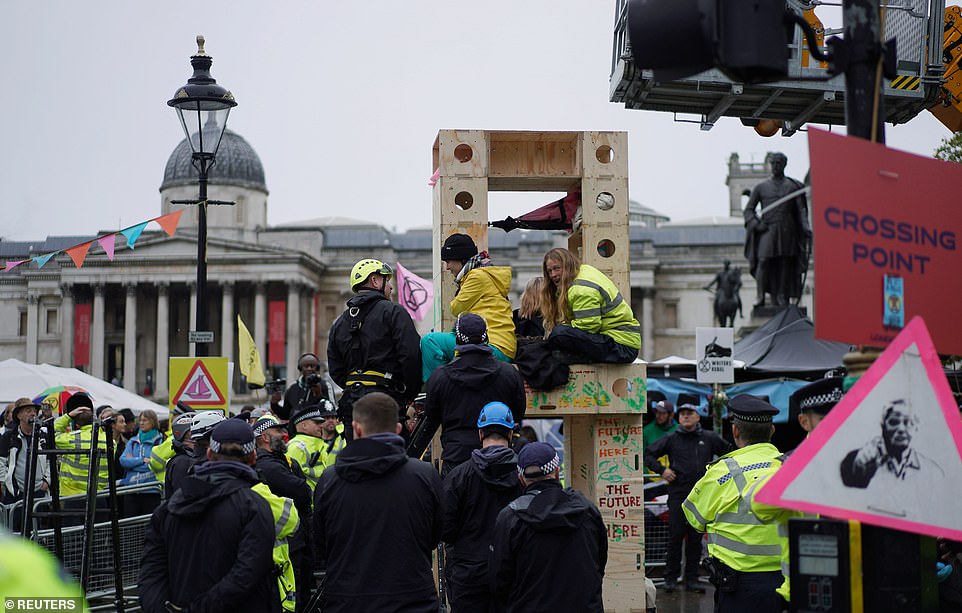 Met Police chief Cressida Dick said on Friday the force has been ‘stretched’ by the protests, impeding its ability to respond to other crimes 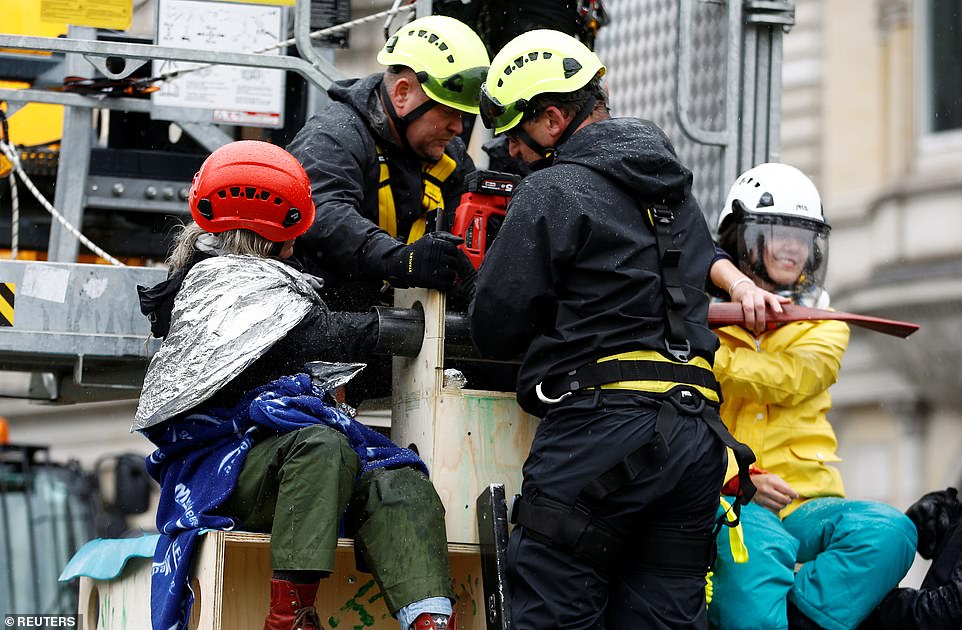 Police remove protesters at the Trafalgar Square during an Extinction Rebellion demonstration in London, October 12

‘Scotland has benefited from mutual aid in the past and will do so again in the future. It’s therefore appropriate that, as the UK’s second biggest police service, we supply officers when asked to do so by other forces.’

Activists blocked the entrance to the BBC’s central London headquarters on Friday, with some scaling the front of the building.

On Thursday, demonstrations focused on London City Airport, where protesters attempted a ‘Hong Kong-style occupation’ of the terminal building, with hundreds blocking the main entrance.

Shortly after 10am today the Met Police announced that there have been 1,290 arrests in connection with the ongoing Extinction Rebellion protests across London.

A spokesperson told MailOnline: ‘It is the police’s role is to provide a lawful and proportionate policing response to any planned protest, balancing the community impact with the right to protest.

‘If protestors break the law, officers will look to arrest those people. Furthermore, those people can expect to be charged, prosecuted, and receive a criminal record.’

Dutch police on Saturday arrested 130 climate change protesters who blocked a main bridge in central Amsterdam as Extinction Rebellion activists disrupted traffic in front of the French parliament in Paris.

The group, created in Britain last year, has carried out a wave of demonstrations around the world since Monday, primarily attempting to blockade city centre streets.

‘The police has for the moment carried out 130 arrests at the Blauwbrug bridge’ in the heart of the Dutch capital, the police said on Twitter.

Dozens of activists gathered at the bridge at around 9:00 am (0700 GMT), local media said.

The historic bridge connects several districts in central Amsterdam and dates back to the 17th century.

Some of the protesters slumped on hammocks hung from pillars supporting the bridge to prevent boats from passing underneath.

Protesters have multiplied in the city since Monday, when some 80 people were arrested outside the celebrated Rijksmuseum, one of Amsterdam’s top tourist draws.

In France, a few hundred activists blocked a key route to the National Assembly for a few hours but were dispersed by police in the afternoon.

‘The police is not our enemy. it’s the big industrialists who exploit the living and the states who let them do it,’ one demonstrator said.

They are backed by Greta Thunberg, the Swedish teenager whose searing UN address in September made international headlines, and by academics studying rising temperatures and sea levels.

Their protests have irritated drivers and some officials but raised the hopes of those who see climate change as a threat to the planet.

The movement is partially credited with pushing the UK government in June to become the first in the Europe Union to commit itself to a net-zero target for planet warming emissions by 2050.

Extinction Rebellion is demanding governments reach that target by 2025, as well as holding ‘citizens assemblies’ to decide policies to achieve that aim.