These are the photos medics have been sharing to Twitter in the aftermath of a Chicago doctor’s death as doctors lobby the NRA for tighter gun control laws.

‘Someone should tell self-important anti-gun doctors to stay in their lane. Half of the articles in Annals of Internal Medicine are pushing for gun control. Most upsetting, however, the medical community seems to have consulted NO ONE but themselves,’ the National Rifle Association (NRA) tweeted. 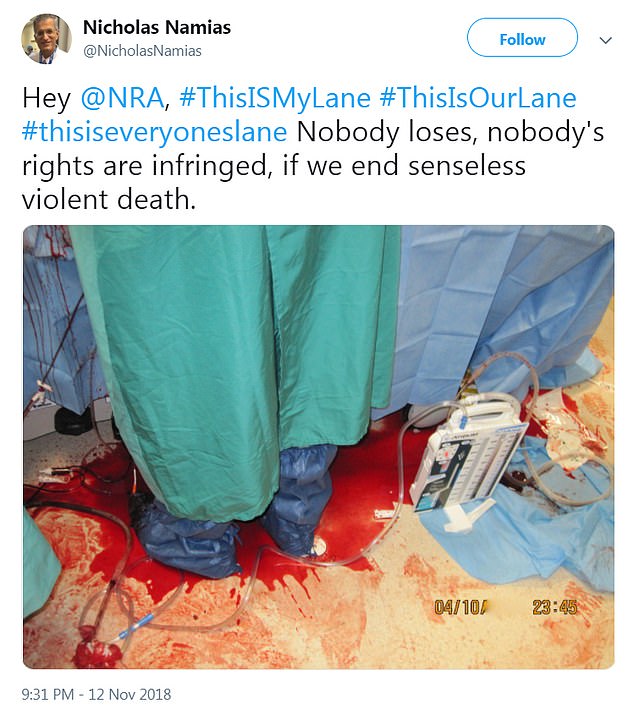 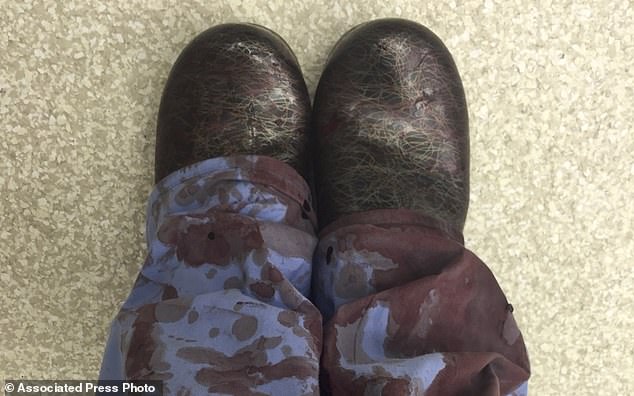 This image recently tweeted by Dr. Kirstin M. Gee, shows her posing in her blood stained scrubs after treating a patient related to gun violence

Dr. Kristin Gee, of Los Angeles, was just one of many doctors who responded, posting a photo of her pants and shoes drenched in a gunshot victim’s blood, writing: ‘To the @NRA, this is what it looks like to stay in #mylane’.

Other physicians across the U.S. then jumped on board and started lobbying, taking to Twitter with 22,000 comments and the hashtags #thisismylane and #thisisourlane, posting photos of their encounters with gun violence and offering their own personal stories of treating such wounds.

The debate gained new urgency this week with the shooting death of an emergency room doctor outside the hospital where she worked, as physicians argue shootings are a public health crisis that they must play a key role in trying to stem.

Dr. Tamara O’Neal was killed Monday outside a hospital in Chicago in what police say was a dispute with her ex-fiance. The shooter and two other people — a responding police officer and a resident in the hospital’s pharmacy — also died. ‘It just shows that not only is this is in our lane, but this happens to us,’ said Dr. Joseph Sakran, a trauma surgeon at Johns Hopkins Medicine in Baltimore who as a 17-year-old was shot in the throat by a stray bullet fired during a dispute at a high school football game.

Sakran created a Twitter account @ThisIsOurLane which in just two weeks has attracted nearly 15,000 followers. They include Dr. Peter Masiakos, a pediatric trauma surgeon in Boston, who wrote ‘The Quiet Room’ just hours after the mass shooting at a church in Sutherland Springs, Texas, about breaking the news that a loved one has died.

‘We need to start talking about this as a public health issue. Politics aside, we have a problem that no other country has, and we shouldn’t,’ Masiakos said.

About 35,000 people each year are killed by guns in the United States, and about two-thirds are suicides. That’s about 670 people per week and among the largest number of civilian gun deaths in the world.

The world’s highest rate of gun deaths is in El Salvador with a rate of 72.5 per 100,00; the rate in the U.S. is 3.1 per 100,000. Among all European countries, the rate never breaks 1 gun death per 100,000, according to Small Arms Survey, a Switzerland-based research organization that examines firearms and violence.

‘These are not just statistics. These are people, mothers, fathers, brothers, sisters that are being killed,’ Sakran said. ‘The worst part of my job is having to go out and talk to these families and to tell them that their loved one is never coming home.’

It’s not the first time that medical professionals have taken on powerful industries: auto companies over seat belts, Big Tobacco over cigarettes and toys that posed choking hazards.

It’s also not the first time that the gun lobby has pushed back against the medical community or researchers it considers to be biased. 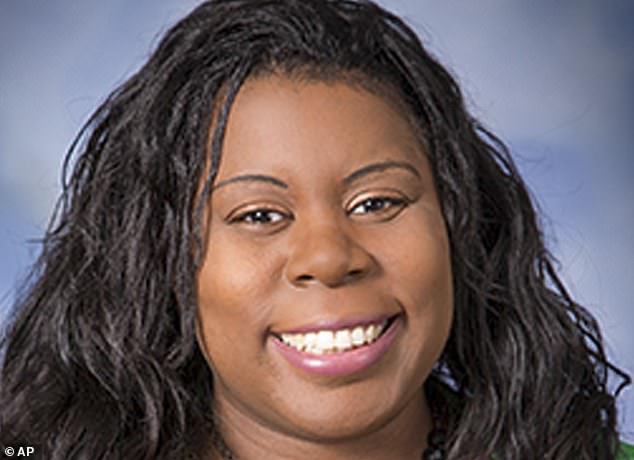 Dr. Tamara O’Neal was one of the three people fatally shot Monday at Mercy Hospital, a Chicago hospital

In the 1990s, Congress barred the Centers for Disease Control from conducting research that advocated or pushed for gun control; while it didn’t ban research from being conducted, it did have a chilling effect.

More recently, the NRA backed legislation in Florida — eventually overturned in court — that would have barred doctors from asking patients about guns in the home.

Dr. Stephanie Bonne, a trauma surgeon in New Jersey, was in the hospital when she saw the dispute playing out on Twitter. 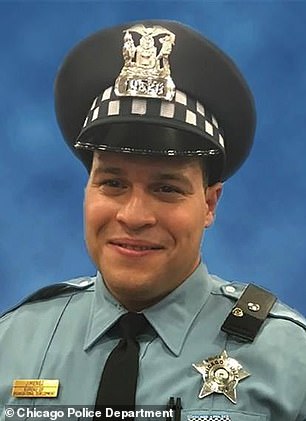 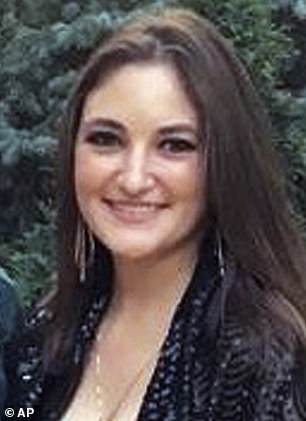 ‘I was reading this, and I was like ‘Stay in my lane’, are you kidding me? Gun violence is something I deal with every day. We’re mopping it up in the hospital every day,’ she said. ‘My second sort of reaction is maybe people ought to see what this lane is really all about.’

Bonne works at a Level I trauma center — the top-level hospital for treating the most serious cases. Her hospital sees about 600 gunshot wounds each year, and she described the toll that unfolds: medically, psychologically and financially.

Dr. Judy Melinek, a forensic pathologist in the San Francisco Bay area, examines the dead. She took to Twitter to push back at the gun lobby, posting: ‘Do you have any idea how many bullets I pull out of corpses weekly? This isn’t just my lane. It’s my (expletive) highway.’ 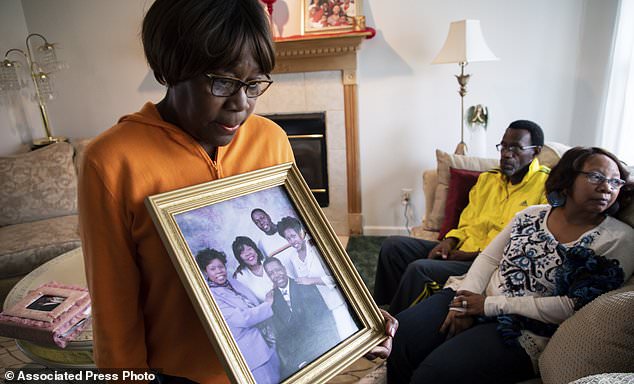 Glenda O’Neal, mother of of Dr. Tamara O’Neal, shows a photo of her family at their home Indiana

‘The chutzpah, the gall is what really got to me,’ Melinek told The Associated Press. ‘The NRA seems to think they’ve cornered the market on expertise when it comes to guns. And that’s not correct.’

She’s conducted about 300 autopsies involving gunshot wounds, about half of those suicides. She’s seen the damage from bullets and believes more and better research would help prevent gun violence.

Dr. Arthur Przebinda, director of the gun rights advocacy group Doctors for Responsible Gun Ownership, said the pushback from physicians is largely driven by more liberal forces within medical academia and based on ignorance about firearms.

He described it as old, tired debate that shows a knee-jerk bias against firearms. Rather than stripping away constitutional rights, physicians should focus on finding ways to study the underlying causes of violence, he noted.

‘These virtue-signaling physicians would be in their lane if they pursued better surgical techniques, better postoperative treatments. They are in the wrong profession if they want to cure society’s ills,’ Przebinda said. ‘If that was their life’s calling, they should have pursued a career path in psychology, criminology or the clergy.’