Gone are the days when TV families consisted of two well-behaved children and their calm, assured parents. Thanks to shows like Outnumbered, Motherland and Breeders, the chaotic side of parenting has been openly explored, and now Maternal, a new medical drama shot through with dark humour, takes things a step further.

Created by the playwright Jacqui Honess-Martin, who wanted to write a show that mirrored her own experiences of going back to work after having children, it ventures not only into the world of the working mother, but the working mother who has to make life-and-death decisions every day.

It’s a world in which you’ve done several hours of hard labour before starting ‘work’ and will have to do several more when you get home, before collapsing at the end of the day.

‘When I went back to work when my first son was six months old, I was tired, grumpy and really struggling. And I work in theatre, which is a warm and relatively caring space,’ says Jacqui. ‘It made me think about mates who were going back into frontline medicine. At that point, in March 2020, we didn’t know exactly what was in store for the NHS but we knew these would be the people holding us up for the next couple of years.

‘I was interested in how we juxtapose the challenges of working in the NHS with the difficulties and sometimes hilarious trials of having small children. I hadn’t seen my own experience of being a working mum reflected on TV. Women are usually portrayed as either professionals or in the domestic sphere, but most of us are doing both and it can be funny, awful and wonderful all at once.’

The result is this eagerly awaited six-part ITV drama. The very first episode will have you shrieking with laughter, staggering in shock and possibly weeping too. The story focuses on three friends who are returning to work after taking time out to have children. Sherlock star Lara Pulver plays surgeon and single mother Catherine MacDiarmid, whose child is the result of a brief romance with a fellow surgeon. She’s desperate to rise to the next level, but her rival – and occasional lover – Jack Oliviera (played by her real-life husband Raza Jaffrey) has the double advantage of not having had nine months off work or having to sort out childcare.

Parminder Nagra, who starred in another medical drama ER (‘I’d watch ER for research so when Parminder was cast it was like the universe eating itself,’ jokes Jacqui about things coming full circle), appears as paediatric consultant Dr Maryam Afridi who’s returning to work after taking two years out to have two children.

And Lisa McGrillis, who starred in the BAFTA-winning Mum, plays Dr Helen Cavendish, a registrar in acute medicine who’s not only returning after three children, but also having discovered her doctor husband’s been having an affair with a colleague. 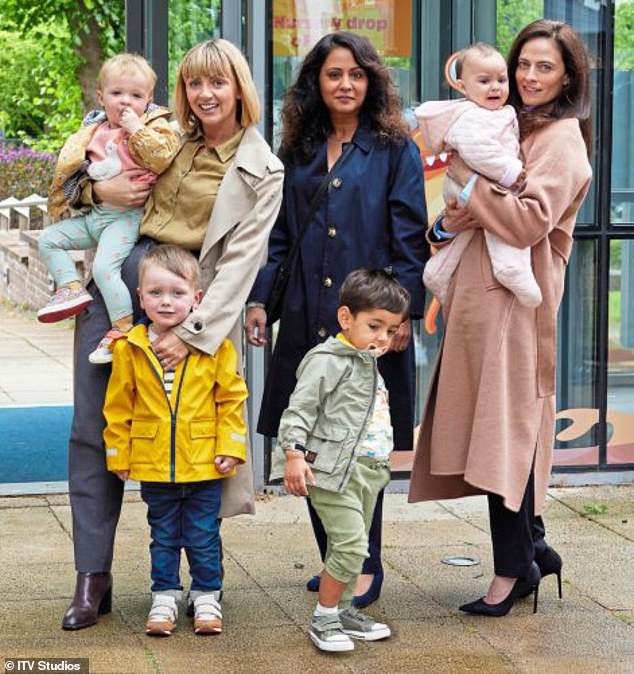 All three women, who’ve been close friends since starting out in medicine, are returning to the hospital on the same day as the NHS is struggling with a post-pandemic backlog. They’re meant to be taking a refresher course but because their unit is so short-staffed they find themselves straight back in at the deep end.

Although it’s set in Manchester, Maternal was filmed in Liverpool, where the ex-Pilkington Glass offices were transformed into hospital wards. There’s a warm feeling on set, not least because Parminder is good friends with Lara and Raza in real life. All three live in LA and were in a bubble together during Covid, so they’re thrilled to be cast together. They’re all working parents too. Parminder’s a single mum to son Kai, 13, from her previous marriage, while Lara and Raza are parents to son Ozias, five, and daughter Thea, two.

I first went so during filming his family not only back to work when my son was six months old and I was tired, grumpy and struggling

‘Lara told me she was going up for the audition and asked me to help read with her,’ recalls Parminder, 47. ‘I said to her, “Let’s get you that part!” She was auditioning over Zoom for the director when he suddenly announced, “Can I speak to Parminder?” and I said, “How dare you! I’m not even in the mix for this thing.” He just laughed and asked me to make some more faces to make Lara react more.

‘When we’d finished Lara said, “I wouldn’t be surprised if you got a phone call in the morning”, and I did! They asked me to do an audition, so I read with Raza because the other role was a male part, and then of course he got a phone call too. So the three of us travelled to the UK like a little family unit.

‘There’s something special in working together. That chemistry can take a long time to build, so the fact we already have it is massive – I feel very lucky that I’m working with two of my mates.’

Raza is originally from Liverpool so during filming his family not only looked after his children but Parminder’s son too. This is also the first time Lara and Raza have worked together.

‘This is the first big job I’ve done since we had our second child,’ says Lara. ‘Before, I was happy just to nip into a role and keep my toe in the water, but this was too good an opportunity to miss.

‘Today I had an emotional scene with Parminder and it was so easy as we have history. You can create that, but if you already have a bond you can go there deeper and faster.’

Lisa may not have that shared history with her co-stars but she’s slotted in nicely, and she’s also got in on the family act, with her 18-month-old daughter Cleo playing her baby in the show. ‘When I read this script I thought, “This is me, basically”,’ she says. ‘I’m just playing a version of myself, which is kind of exposing.

‘I volunteered Cleo when I read that my character has a one-and-a-half-year-old. The downside of having her working with me was I’d be thinking, “She’s missed her nap,” or, “She needs a snack.” But she was great, so confident. She’d walk around going, “Hiya!” to everyone. She puts her arms out and says, “Mummy”, so that’s going to look real.’

But it wasn’t all plain sailing. ‘There’s a scene where I’m rocking her to sleep, giving her milk and singing a lullaby,’ recalls Lisa. ‘It was the end of a long day and she was really tired and started to play up. She was crying, she didn’t want me to hold her and you’ve got the whole crew watching you parenting. You’re thinking, “Just drink the milk!” If it had been another baby I couldn’t have settled her, but because it was Cleo I knew what to do and she calmed down.’

For research, the three actors were paired with real doctors who are mothers. Lara recalls one anecdote that really struck her. ‘I spoke to a surgeon who recalled having her childminder on the intercom while she was performing surgery. She was asking the childminder if she could possibly look after the kid for another couple of hours because she was trying to save a life. Most of us aren’t trying to save lives but I think we’re all trying to muddle through as working parents, and it’s great to explore the many challenges to that.’

Maternal starts on Monday at 9pm on ITV1.

Prescription for fame! The glamorous TV doctors cashing in on pandemic demand for all things health related with reality shows, Instagram posts and book deals – and potentially QUADRUPLING their NHS salaries

Doctors turns 20: How the medical soap gave the likes of Fleabag’s Phoebe Waller-Bridge, GoT star Emilia Clarke and The Crown’s Claire Foy their first acting break during two decades on the BBC

Where HAVE our GPs gone? Shock new figures show just one doctor for every 2,200 patients as NHS staff shortages start to bite… and even routine appointments are axed by more than a third of practices