Doctors’ lives are still being put at risk by a lack of PPE, British Medical Association warns

Doctors’ lives are still being put at risk by a lack of personal protective equipment (PPE), the British Medical Association today warned.

More than two thirds of doctors (69 per cent) questioned by the union said they do not feel protected while fighting Britain’s COVID-19 outbreak.

The snapshot poll of 2,000 medics also found some feel forced to come into face-to-face contact with infected patients without the right equipment.

And doctors warned that some of the aprons and goggles they are currently relying on to fight the coronavirus crisis is ‘useless’.

The BMA and other doctors’ unions have repeatedly warned NHS staff will die unless frontline staff are properly equipped with protective gear.

Hospitals have taken to begging for equipment from companies and DIY stores on social media amid a nationwide shortage of PPE.

While one frontline doctor resorted to spending £90 on motorcross goggles to make improvised equipment for his team.

A demonstrator today wore a face mask outside of St Thomas’ Hospital in London, where Boris Johnson is being treated, and called for more personal protective equipment for NHS staff 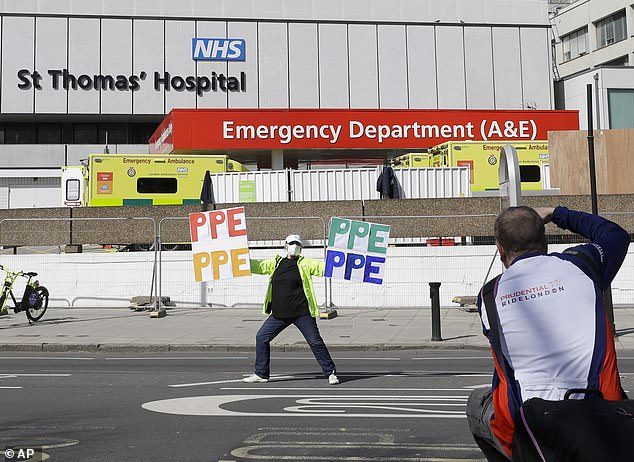 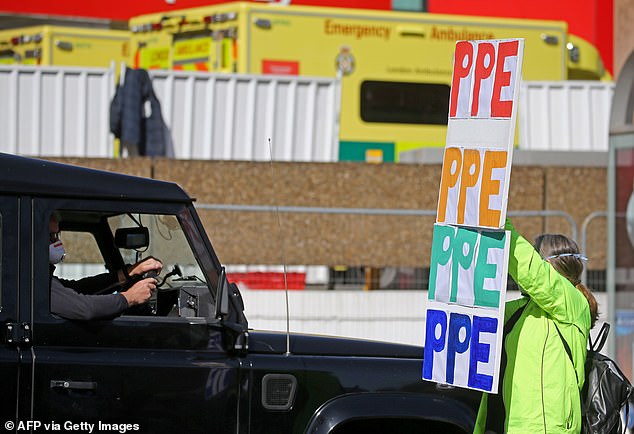 The demonstrator approached cars driving outside the hospital with her signs, calling for more PPE for frontline NHS medics

ARE OXYGEN SHORTAGES THE NEXT PPE?

It comes as the Health Service Journal (HSJ) reported that some hospital bosses say issues with supplying oxygen to hospitals is the ‘new PPE’.

Some said the engineering workforce is ‘spread too thin’ and supplies were running low, though NHS England has said the story is untrue.

A senior leader at a trust outside London told HSJ they had been trying to get more engineering support for more than a week.

She said: ‘It is crucial to how we align our oxygenated beds with the modelling that has been done for our region.’

Health Secretary Matt Hancock has said the Government has a ‘very high degree of confidence in the supply’ of oxygen.

Over the weekend, Watford General hospital declared a critical incident after a technical problem with its oxygen equipment.

Experts first warned of an oxygen shortage in the NHS last month, saying hospitals could run out of the gas within hours if hit by a wave of coronavirus patients.

Gas suppliers were told to quadruple production to help hospitals prepare and military drivers may be requisitioned to do the deliveries.

GP practices say that, when they’ve appealed for equipment from the NHS, they have been told to buy their own from other suppliers.

Some staff said they have seen colleagues fall ill because of ‘inadequate PPE’ and others are having to buy their own.

Doctors, nurses and carers were told to wear protective masks if they come within two metres of anyone who could have coronavirus.

Health leaders welcomed the move but said ‘unacceptable’ shortages of equipment means doctors and nurses will still have to risk their lives to treat patients.

The BMA poll laid bare the true extent of the PPE shortage, with just 12 per cent of 1,124 hospital doctors saying they felt fully protected from the virus at work.

It also revealed that 27 per cent reported their NHS trust was running low on basic supplies such as soap.

More than half (54 per cent) of doctors working in high-risk environments, including those carrying out risky procedures such as intubating patients, said there were either shortages or no supply at all of adequate face masks.

Discussing the PPE they already have, one hospital doctor said: ‘The quality of our eye protection and apron is useless. 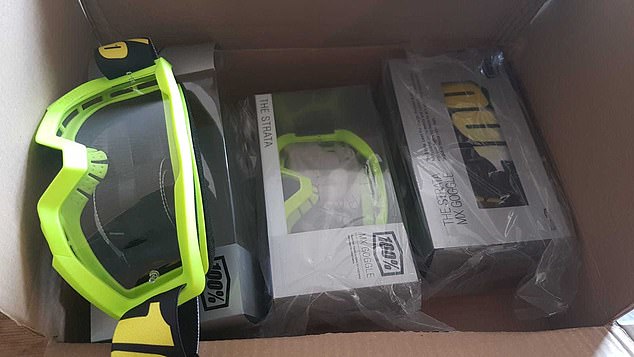 Images of Motocross goggles, pictured, which an NHS doctor paid £90 for to protect his team on the coronavirus frontline, sparked outrage on social media

An NHS doctor was forced to spend £90 of his own money on dirt bike goggles to create ‘improvised’ personal protective equipment (PPE) for his team fighting coronavirus, an MP has claimed.

The MP for Twickenham said in a message retweeted more than 900 times that she’d been sent the picture by a frontline doctor.

The products, which are retailing online for £34.99 each, and advertised by Motocross as a ‘budget goggle’ look similar to those used for skiing, but are designed for off-road motorcycle racing.

Ms Wilson wrote: ‘Utterly, utterly ridiculous. Doctors are now having to pay for their own improvised PPE equipment to keep them safe at work.

‘Just been sent this from a doctor on the coronavirus frontline – he’s spent £90 on [these] goggles to protect him and his team.’

The post appalled social media users, with one writing: ‘Yup. My colleagues doing the same. No one trusting [Public Health England] guidance which conveniently suits the lack of appropriate PP’.

‘Some of the PPE provided feels like a tick-box exercise just for psychological reassurance.’

Another anonymous doctor said: ‘I am the only Muslim anaesthetist with a beard in my department.

‘I am being forced to shave my beard due to unavailability of hood masks with respirator, and a bearded doctor can’t pass a fit mask test.’

Some 88 per cent of GPs in contact with COVID-19 patients reported either shortages or no access at all to eye protection, and 62 per cent said there were problems with supply of facemasks.

More than half of the 599 GPs who responded said they had had to buy their own facemasks or eye protection, with only 2 per cent saying they felt fully protected against the virus at work.

One GP told the BMA: ‘I feel betrayed by the Government who are not transparent enough to say that they do not have the ideal supplies and are therefore asking us to put ourselves in harms’ way with sub-optimal protection.’

The survey also revealed that despite the Government pledging to ramp up testing of frontline NHS workers, only 195 respondents said they had ready access to tests.

Overall, 40 per cent of both hospital doctors and GPs said their capacity to treat patients was being hampered by colleagues being off due to self-isolation.

Dr Chaand Nagpaul, chairman of the BMA’s council, said: ‘In less than three days, nearly 2,000 doctors across the UK have told us how desperate their situation really is.

A leading medic has warned ‘fifty doctors in Britain will die’ battling the coronavirus pandemic if frontline staff are not properly equipped with protective gear.

Rinesh Parmar, chairman of the Doctors’ Association, claims medics are buying their own personal protective equipment (PPE) in a bid to shield themselves from the deadly virus.

He also says intensive care intensive care doctors and anaesthetists have been carrying out procedures, such as putting a patient on a ventilator, with masks that expired five years ago.

Speaking to The Sun, Dr Parmar warned that if medical staff are not properly equipped that the UK could follow in Italy’s footsteps, where more than 50 members of the medical community have lost their lives. 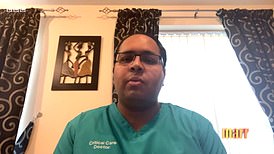 Rinesh Parmar, chairman of the Doctors’ Association, has warned ‘fifty doctors in Britain will die’ battling the coronavirus if frontline staff are not properly equipped with protective gear

‘We are weeks into the most serious health crisis this country has faced in modern times and doctors are telling us they don’t have any, or don’t have enough, protective equipment.

‘Until now, we have been hearing anecdotal stories about shortages or a lack of PPE. This survey confirms the extent of this failure.

He said the majority of doctors reported that they had not had either the advice or the training needed to properly fit, put on and take off PPE.

‘Without this training they increase their risk of exposure to virus and of spreading it,’ he said.

‘Increasing numbers of healthcare workers are dying from Covid-19 in the UK, including four doctors, and it is frankly disgraceful that frontline staff are still expected to work unprotected.

‘We must protect doctors so they can protect patients.’

It comes after a leading medic warned at the weekend that ‘fifty doctors in Britain will die’ battling the coronavirus pandemic if frontline staff are not properly equipped with protective gear.

Rinesh Parmar, chairman of the Doctors’ Association, claimed medics are buying their own personal protective equipment (PPE) in a bid to shield themselves from the deadly virus.

He also said intensive care intensive care doctors and anaesthetists have been carrying out procedures, such as putting a patient on a ventilator, with masks that expired five years ago.

It comes after the Government last week penned an open letter pleading for firms who can make personal protective equipment (PPE) to come forward.