Doctors are posting selfies posing in bikinis with beers in their hands amid a backlash against a ‘sexist’ study by male researchers that claimed medics look ‘unprofessional’ sharing such images on social media.

Female medical professionals have been flooding social media with snaps of themselves in their swimwear, lounging in pools and enjoying a cocktail or a beer under the hashtag #MedBikini in outrage over the research published in the Journal of Vascular Surgery.

The offending study concluded that photos where doctors are wearing ‘inappropriate/offensive attire’ such as swimsuits, are holding or consuming alcohol or that include ‘controversial political comments’ are ‘potentially unprofessional’ and could impact whether patients choose them as doctors.

The medical community hit back at the research, carried out by three men, slamming it as ‘sexist’ and ‘disturbing’ as calls mount for it to be retracted. 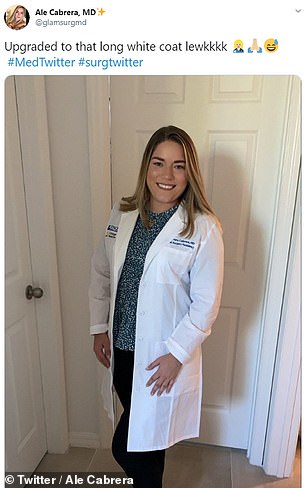 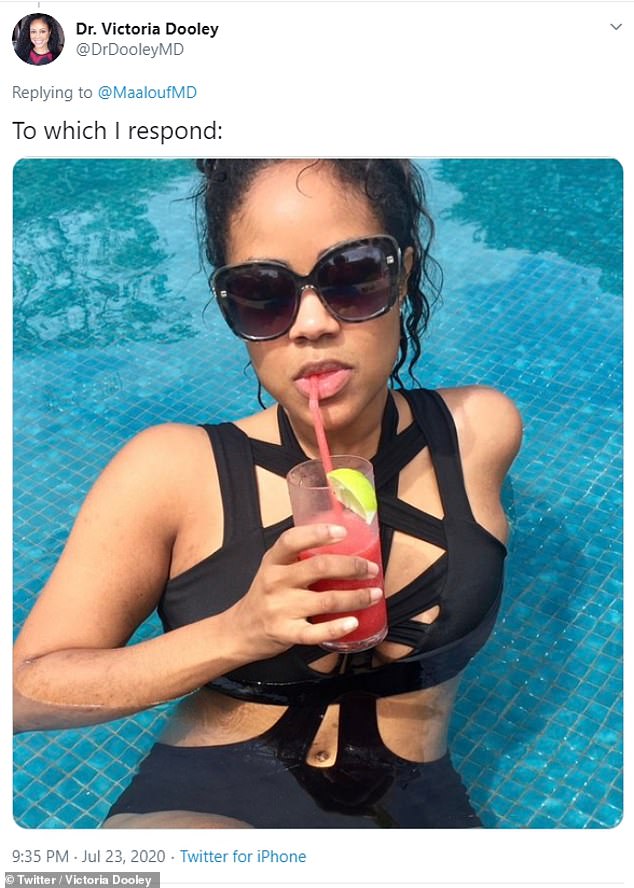 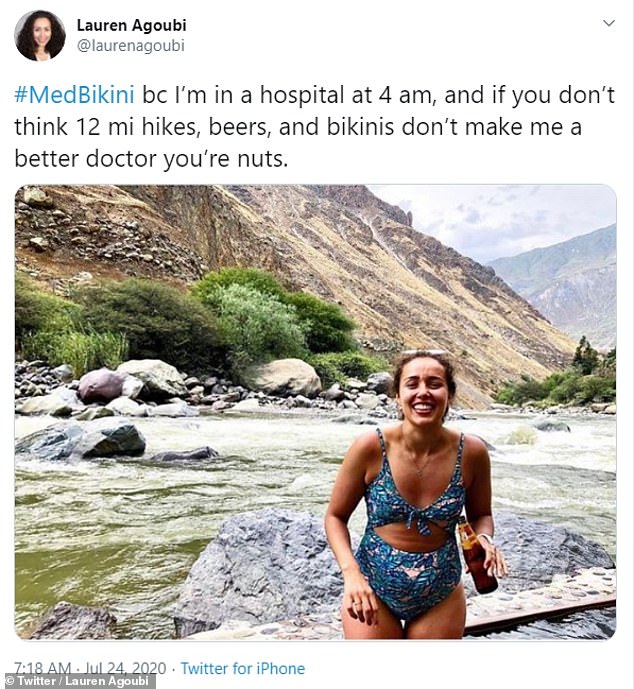 The study, which also concluded that ‘censored profanity’ such as swearing and ‘controversial social topics’ are ‘unprofessional, didn’t refer specifically to female medics but the outraged community have accused it of perpetuating ‘sexism’ in the profession.

The hashtag #MedBikini began circulating on social media this week with doctors posting their swimsuit selfies in defiance of the controversial findings.

‘In case you wanna know what’s happening in doctor twitter today: a “scientific” publication just announced that holding alcoholic drinks and wearing bikinis are unprofessional behaviors for a doctor. What till they hear that med schools started letting women wear pants!’ she tweeted Thursday.

A fellow female medical professional responded with a snap of herself sporting a cutout swimsuit and sunglasses while lounging in a pool with a cocktail.

‘To which I respond,’ the doctor captioned the picture.

Others shared snaps of themselves in bikinis as well as their white coats and scrubs. 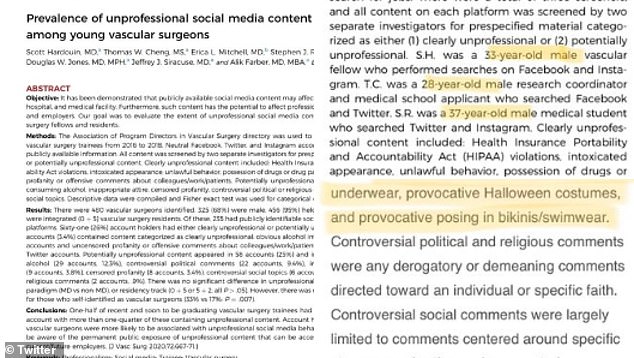 The offending study concluded that photos where doctors are wearing ‘inappropriate/offensive attire’ such as swimsuits, are holding or consuming alcohol or that include ‘controversial political comments’ are ‘potentially unprofessional’ and could impact whether patients choose them as doctors 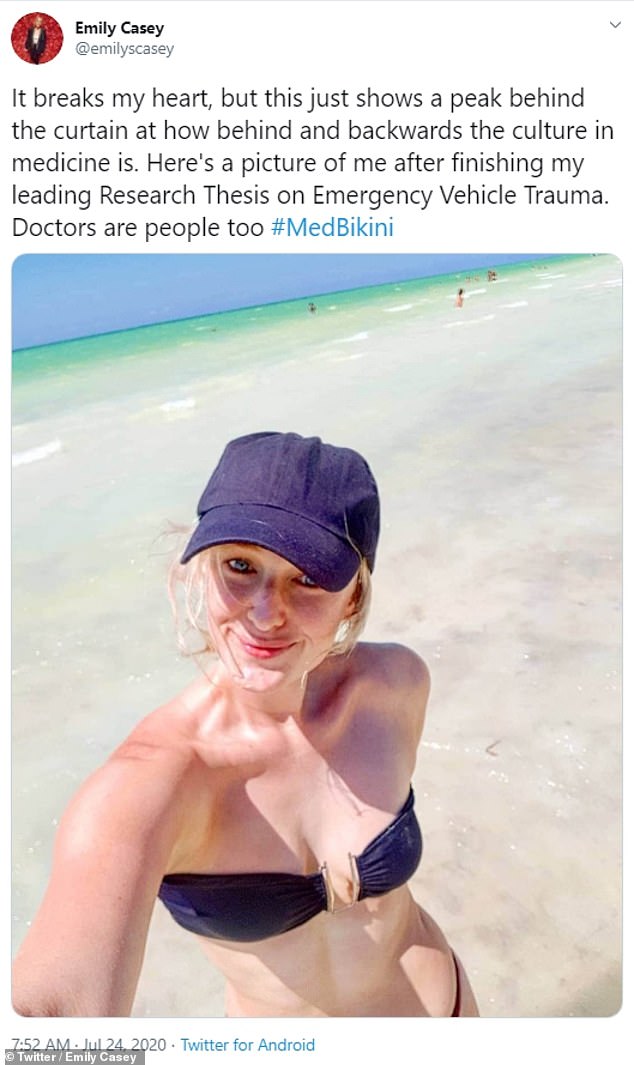 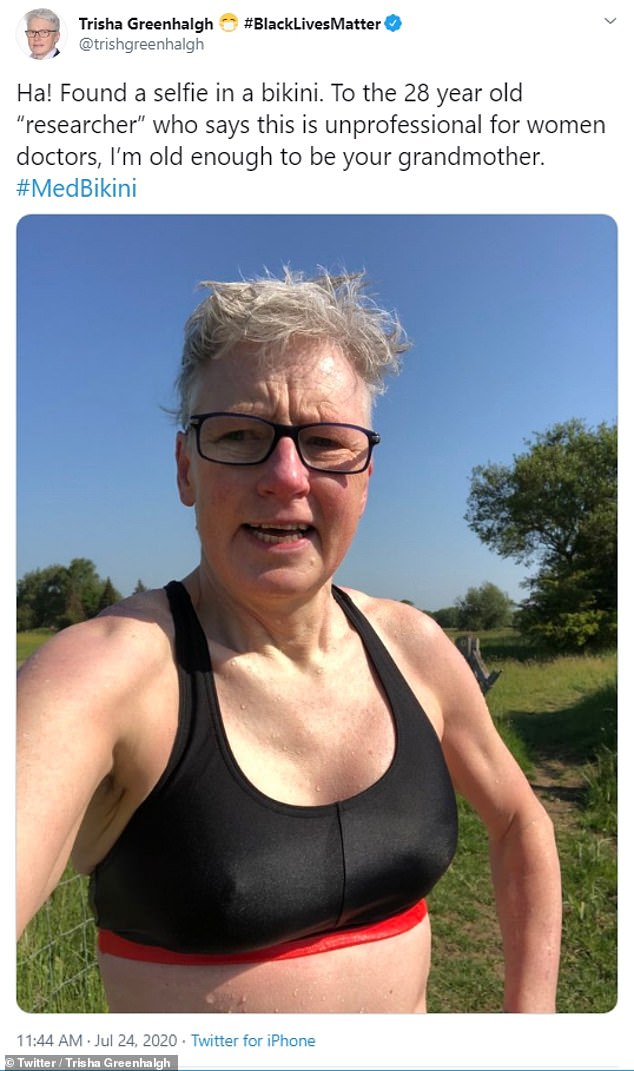 Another doctor poked fun at the paper tweeting: ‘We all know medicine and bikinis don’t mix. Bikinis are not recommended for use in the workplace. Please bikini responsibly.’

Meanwhile one professional hit out at the ’28 year old researcher’ who carried out the study.

‘To the 28 year old ‘researcher’ who says this is unprofessional for women doctors, I’m old enough to be your grandmother,’ she tweeted.

Several medics voiced outrage over what they called outdated attitudes in the medical community.

‘Let’s fight back against ‘professional standards’ as a tool for dismissal of those already disempowered within medicine.’

Another posted: ‘I am good at my job, I am a professional. I am a doctor. I am also a human. So to anyone who wishes to take issue with it…..Sod off. Yes, this is an alcoholic mojito.’

Many male doctors also got in on the act in a show of support for their female colleagues. 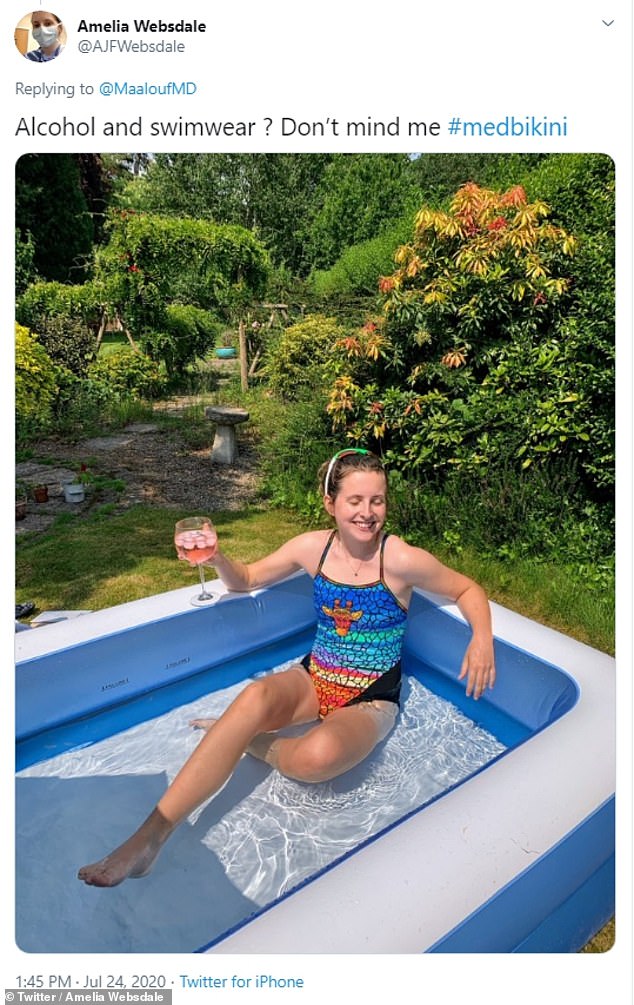 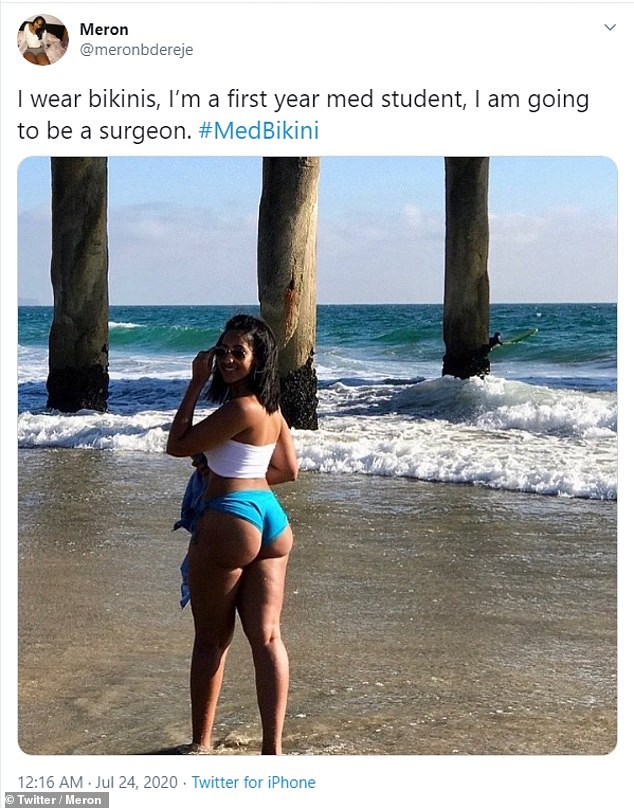 ‘Although no one will want to see this Dad bod here it is in full support of my female colleagues and this misogynistic study,’ tweeted one male doctor alongside a snap of him topless in the sea.

‘Without my female mentor in medschool and the one in residency, I wouldn’t be the surgeon I am today.’

‘If you are a true #heforshe, then you must speak up against this disturbing study,’ tweeted Dr. Mudit Chowdhary.

‘Worse they are shaming our women physician colleagues for wearing bikinis.’

One medical student called Stephanie told the New York Post she was ‘disappointed but not surprised’ to learn the study was carried out by men.

‘When I saw that it was three men who authored this paper, I was disappointed but not surprised, considering the many conversations that have happened on #MedTwitter about how professionalism is often an arbitrary set of rules,’ she said, adding that the term ‘professional’ is often used in the medical community to hidet the sexism that exists. 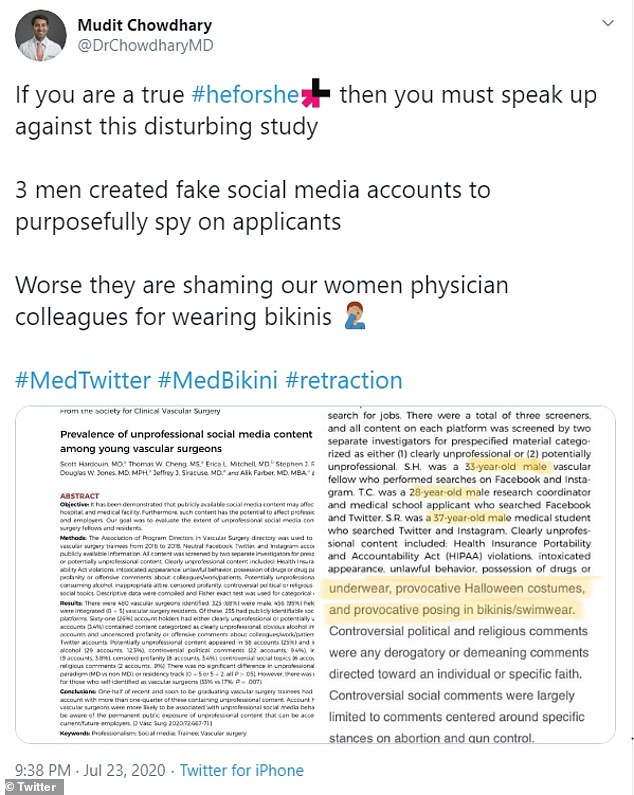 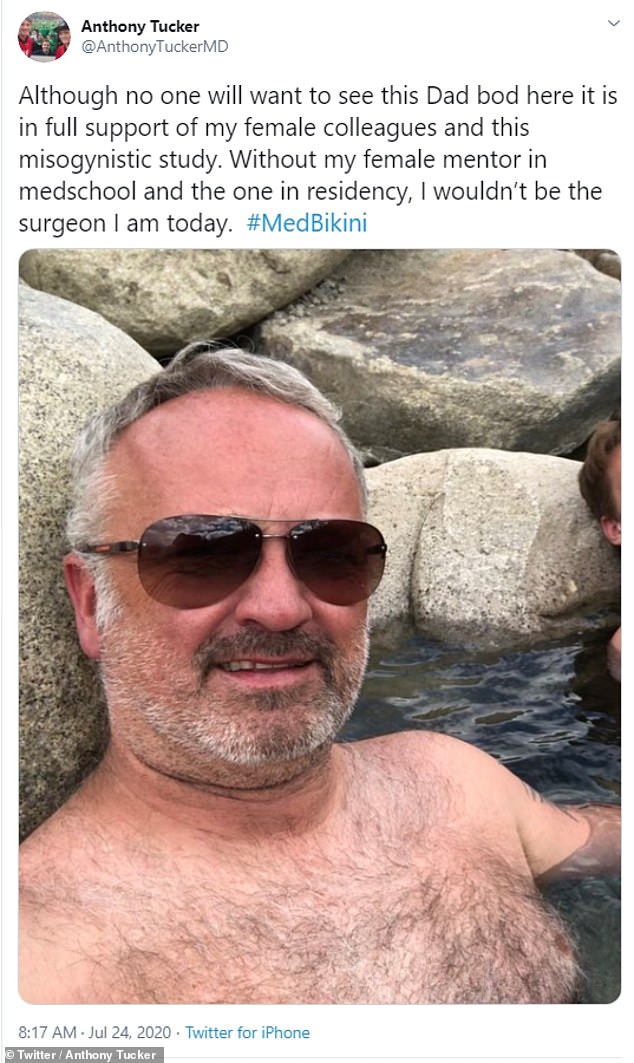 She said she hoped the social media backlash helped drive change in the profession.

‘I hope #MedBikini is the start of health-care workers reflecting on their deeply implicit misogynistic biases and start to restructure their views on what female professionals look like,’ Stephanie said.

‘Women should not have to strip themselves of their femininity and womanhood to be considered a professional, especially in their personal lives.’

Two of the study’s authors have since apologized for the study and claimed they had aimed to ’empower’ the profession with the study.

‘Our intent was to empower surgeons to be aware and then personally decide what may be easily available for patients and colleagues to see about us. However, this was not the result,’ Thomas Cheng and Jeffrey Siracuse both tweeted.

‘We realize that the definition of professionalism is rapidly changing in medicine and that we need to support trainees and surgeons as our society changes.

‘We are sorry that we made the young surgeons feel targeted and that we were judgmental.’