A man was taken into intensive care after trying to swallow a spiny catfish in a drinking game.

Scientists have now published a medical case study of what they called a ‘reckless’ stunt among a group of Dutch 20-somethings.

The 28-year-old tried to swallow a bronze catfish from his friend’s aquarium but the animal’s spiny fins got stuck in his throat and left him vomiting blood.

After being admitted to hospital, the man had the fish tugged out by doctors using forceps and made a full recovery from his ordeal with the poisonous animal.

The body of the catfish (pictured) is now on display at the Natural History Museum in Rotterdam, alongside other animals which have faced unusual deaths

The bronze catfish – a species also known as a Cory – sticks spines out of its fins as a defence mechanism when it feels threatened.

These sharp spines contain venom which can be painful or deadly for other, bigger fish which try to eat it.

People at the party had already swallowed a ‘batch’ of the host’s pet goldfish, a report in the journal Acta Oto-Laryngologica Case Reports explained.

Then, not expecting the catfish’s spiky surprise, one of the men – who was not named out of fear of animal rights’ protestors, but came from the city of Vlaardingen – tried to swallow the more exotic pet.

The story first emerged in 2016 when it happened and the journal article describes the event as it was seen on a two-minute video.

One person drank water containing the 5cm (2in) fish but spat the animal out onto a table, when it was passed to the unwitting patient.

As his friends chant the phrase ‘big fish! big fish!’, he put the fish in his mouth and tried to swallow it with beer. 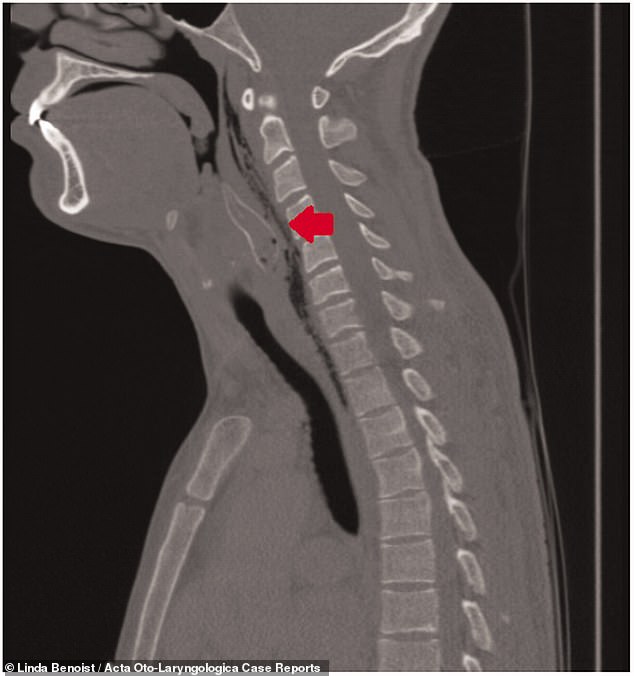 When the man went to hospital after attempting to clear the fish out using ice cream, honey and beer, doctors found a ‘fish-like structure’ on a scan and pulled it out with forceps 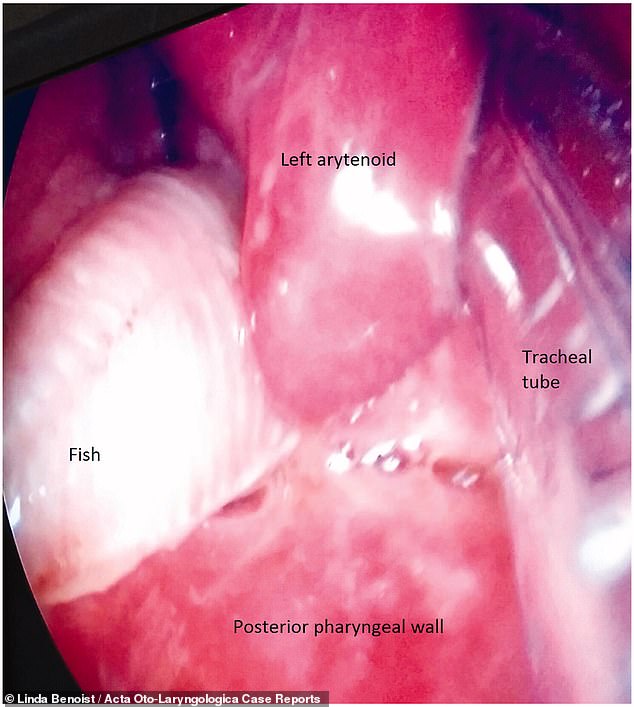 The bronze catfish, which became stuck because it has spines on its fins, was lodged beside the man’s voice box after the party stunt went wrong

After the attempt to swallow, he then ‘gagged vigorously’, ‘vomited liquids’ and even made himself sick by putting two fingers down his throat.

A friend administered a ‘wrongly applied Heimlich manoeuvre’ but the patient was ‘still gagging’, then spewed blood in a bucket.

None of the above managed to dislodge the fish, and nor did follow-up attempts to clear the man’s throat with more beer, honey and ice cream.

THE ‘DOMINO SPARROW’ ON DISPLAY WITH THE THROAT FISH

At the Natural History Museum in Rotterdam, Netherlands, where the body of the fish the man tried to swallow is now on display, there are other animals which have died in curious circumstances.

One is the ‘domino sparrow’.

The famous domino sparrow was shot dead in November 2005 at the Dutch Frisian Expo Centre, four days before the year’s Domino Day.

Preparations were being made for a world record attempt when the bird flew into the building and knocked over 24,000 dominos.

After efforts to remove the bird failed, he was shot, sparking a court case which saw the shooter fined 200 Euros, and the killing sparked huge protests.

When he went to hospital struggling to speak or swallow, medics found a ‘fish-like structure’ stuck beside his voice box.

Measuring 5cm (2ins) long and 1.5cm (0.6ins) across, the fish had to be removed with forceps and the man had a breathing tube put in and was taken to intensive care.

Luckily, his oesophagus was not punctured by the spines and the fish’s venom did not seriously affect him.

In their report, the staff from Erasmus University Medical Centre in Rotterdam, said: ‘This case illustrates how a reckless drinking game, imitating Jackass and/or “A Fish Called Wanda” can turn into a dangerous and critical medical situation with serious consequences.’

They added: ‘Ingestion of a live fish resulting in airway obstruction is rare and in most cases, fatal occasion.’

The remains of the fish are now in display in the Natural History Museum in Rotterdam alongside other animals which faced unusual fates.

Among them are a hedgehog which starved to death after getting its head stuck in a McFlurry container and a sparrow shot dead after it knocked over 24,000 dominoes and wrecked a world record attempt.