Two maggots have been removed from a woman’s scalp after she was able to feel something moving underneath her skull.

The unidentified patient, in her 50s, had recently returned to her home in the UK following a trip to Argentina, doctors revealed.

Feeling unwell because of a pain in her left ear and swollen lymph nodes, she visited her GP and was told she had an infection.

She also flagged up two small ‘lumps’ on her scalp, which her doctor diagnosed as cysts and gave her a course of antibiotics to treat.

However, the cysts grew in size over the next three weeks and caused ‘stabbing pains’, as well as leaking a clear, odourless fluid.

One of the maggots that was removed from the woman’s scalp is pictured. Medics used Vaseline to lure it out of her skin 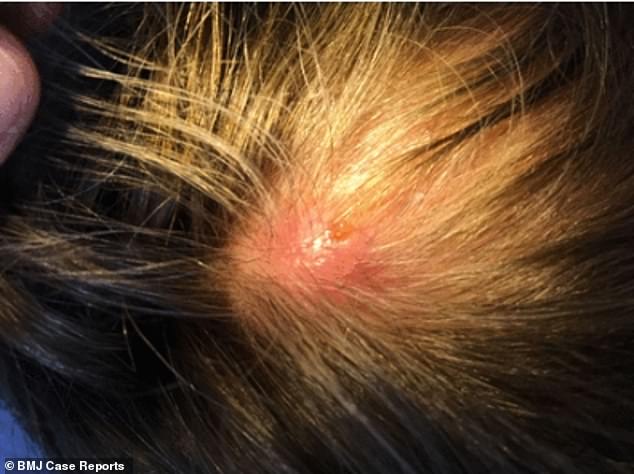 When she returned to the UK, she flagged up two small ‘lumps’ on her scalp to her doctor, who diagnosed them as cysts. However, the cysts grew in size of the next three weeks and were causing ‘stabbing pains’, as well as leaking a clear, odourless fluid (pictured, one of the lumps)

Doctors who saw the patient were baffled when blood tests they had taken came back as normal.

The woman said a friend ‘had suggested’ the idea of a parasitic infection quite early on.

But she ‘accepted the GP’s diagnosis of cysts and didn’t look into the possibility of a parasite’ until the lumps were very painful and difficult to live with.

The woman was admitted to a hospital ran by the Sheffield Teaching Hospitals NHS Foundation Trust seven weeks after returning home.

By that point, the raised lesions both measured around 2cm in diameter and had tiny openings known as punctums.

She had been referred after suggesting the possibility of a human botfly infestation to her GP. 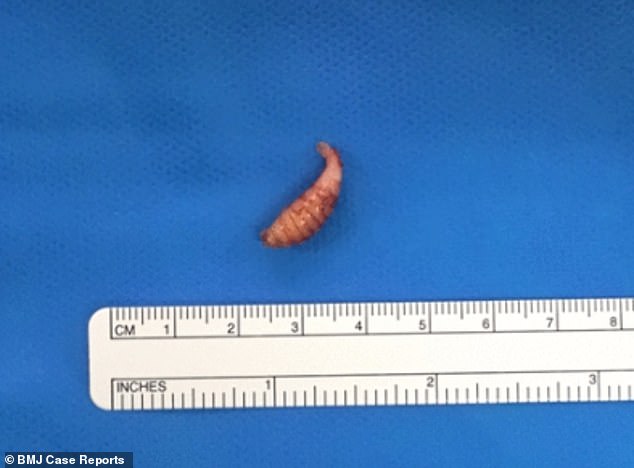 The other maggot died and was ‘inaccessible’. The woman was wheeled for surgery the next day so the dead maggot could be removed under anaesthetic

The patient had been bitten by mosquitoes on several occasions when she travelled to Iguazu Falls, on the border of Brazil.

Botflies deposit their eggs on mosquitoes, meaning their larvae can be transmitted to humans if they are bitten by the insects.

Medics suggested she may have myiasis – an infection with fly larva. They suspected the human botfly, mainly found in South America, was to blame.

Writing in BMJ Case Reports, doctors said: ‘The patient reported being able to sense movements within her scalp around the affected regions.’

‘A plan was made to extract them by smothering the cysts with Vaseline,’ according to Dr Rhys Watkins, the lead author of the report.

‘This would occlude the larvae’s central punctum, through which they breathe, theoretically forcing them to come up to the surface for air and exit the host.’

Only one of the maggots was removed through this method. The other had died and was ‘inaccessible’.

The woman was wheeled for surgery the next day so the dead maggot could be removed under anaesthetic.

‘Both wounds were washed out with saline and antibiotic ointment was applied to the scalp,’ Dr Watkins and colleagues wrote.

‘The patient was advised to take lukewarm showers twice daily and to continue to apply ointment until the wounds scabbed over.’

Writing in the journal, the medics added: ‘This particular case is atypical as botfly infestation in humans usually involves a single larva.

‘The warmth of the host’s body triggers the fly eggs to hatch, and the larvae then burrow into the subcutaneous tissue.’

A consultant the woman saw after the maggots were removed said her swollen lymph glands could have been affected by the larvae.