Moments like Tottenham’s late, desperate winner in the Champions League semi-final will always leave abiding images. As Ajax’s desolate players lay scattered on the grass like fallen soldiers and Mauricio Pochettino dropped to his knees, head in hands, his face distorted by the agony of ecstasy, another unfolded up in the television studios.

Glenn Hoddle, working as a pundit for BT Sport, sprung to his feet, eyes wide, arms wider, before punching the air with both fists, clutching his face and letting out a noise that was half scream, half strangled yelp.

Rio Ferdinand, sat next to him, whacked Hoddle in the chest before asking if he was okay before Gary Lineker encouraged him to sit down. A mixture of excitement at the achievement and concern over the health of a man who had only left hospital six months ago after a heart attack.

‘I reacted like anyone would,’ said Hoddle. ‘I have supported Tottenham since I was eight. I played for them, managed them, supported them. With what has happened to me, to see them get to the final…and we don’t know if they will win it yet…it hit me that it was something I might not have been around to see.

‘I did have a bit of a head rush. It was a bit scary but a wonderful reason to get one. Then we had to hang on for only for a minute. That was lucky for my heart!’

‘My family WhatsApp was on fire within minutes. You don’t think about those things. That is what football does to you.’

Doctors have warned him not to get too over-excited but if Tottenham beat Liverpool in the Champions League final on June 1, Hoddle says he cannot promise he will pay their words much attention.

‘If they win the final with a late winning goal, I will do the same! It’s in your blood.’ 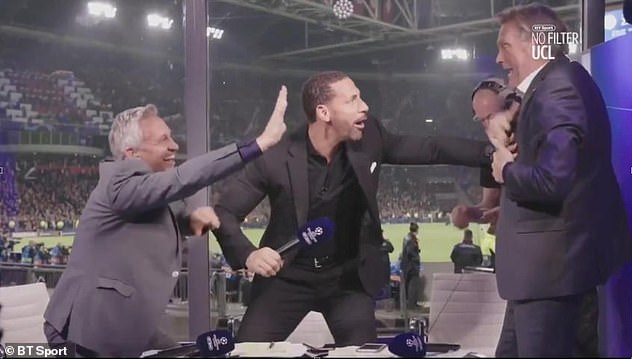 What about those fans who believe television pundits should be impartial?

‘Pretty sad. They have got to understand if you have been involved in a club like I have, I would be the best actor in the world if I could switch that off. Rio was a neutral but look at his reaction. If it happens again, I will do the same.’

Hoddle suffered his heart attack while in the BT Studios on his 61st birthday in October.

‘It was surreal. My family were keeping me semi in touch when I was in hospital. It made a big difference to get that positive feeling from people. I fed off that. It was wonderful. I said to someone that when you pack your boots up, you become a better player. When you pass away you become even better. I had the chance to hear it!’ 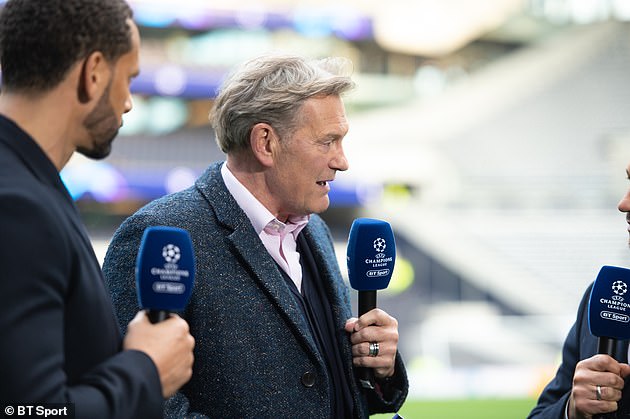 But how likely is it that Hoddle’s arms could be up in the air again? He admits that Liverpool are favourites. They pushed Man City all the way in the Premier League and also have the experience of reaching the final last year.

Spurs, though, could welcome Harry Kane back. Their captain has been out with an ankle injury since April but could return.

‘I hope that he is on the bench,’ said Hoddle, who missed Tottenham’s 1984 Uefa Cup final triumph through injury. ‘The tempo of the game is likely to be very intense at beginning, especially the way Liverpool come out traps. It is asking a lot for him to start if his ankle is not 100 per cent right. The game might bypass him a little. But it is great news that he might be fit. I would like to see him come on with half an hour to go. He can still have a massive impact on the game.’

Whatever the result, Hoddle believes Pochettino will remain at Spurs despite hinting that the Champions League final could be his final game for the club. 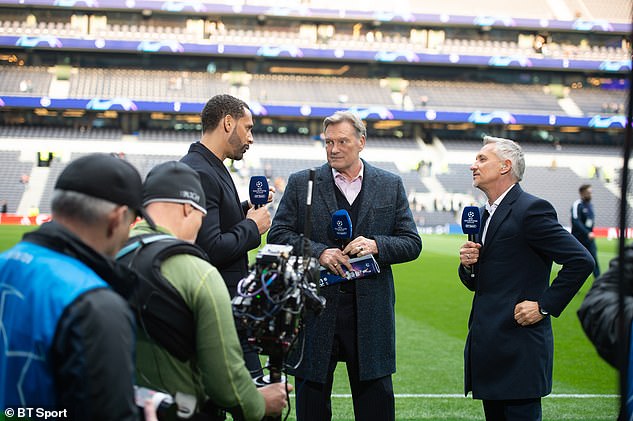 ‘A few clubs may be sniffing but he would have to rebuild those too. I don’t think he is that kind of guy. They will build in the summer.

‘I do believe there will be funds available. I think he realises now that the two windows they needed to strengthen a bit. This summer they will need it. Mauricio wants a certain type of player. Team players, who put the club first. That is how he works. I don’t think he will go out searching for individuals or the best players in the world. They will be very good players who he can make even better but within the team. That is how they have worked over last five years and it has got them to the final.’

BT are giving you more ways to watch the UEFA Europa League Final and the UEFA Champions League Final than ever before.Watch on TV, YouTube or via the BT Sport App 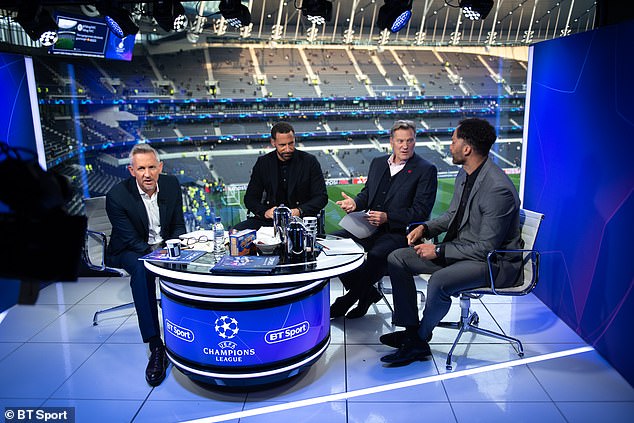 But Hoddle has claimed: ‘If they win the final with a late winning goal, I will do the same!’