Documentary maker, 32, reveals she escaped Afghanistan as a baby to move to the UK

A documentary-maker has revealed she was trafficked out of war-torn Afghanistan as a child – but only found out by accident when she interviewed her mother for a new podcast.

Nelufar Hedayat, 32, began her journey from Kabul in the late eighties, eventually arriving in London in 1994, after spending time in Saudi Arabia and Pakistan en route.

In her podcast series, Doha Debate’s Course Correction, she interviews her mum, Patuni, and learns for the first time of the perilous journey her family took to claim asylum in the UK – finding out smugglers told them they were actually going to Germany, before the plane they were on landed at London’s Heathrow.

The journalist said it was ‘really hard to process’ the news: ‘So much of my identity, from my taste in music to what I studied at university, was basically decided by the fact that I am British. Yet I’m British by total accident. I wasn’t supposed to end up here.’

Nelufar Hedayat, 32, was trafficked from Kabul to London in the late eighties, eventually arriving in London in 1994, but is now a regular face on British TV screens, best known for presenting CBBC’s Newsround from 2011 to 2014. She is pictured with her mother, Patuni, who has finally agreed to open up to her daughter about her family’s difficult journey from war-torn Kabul to London 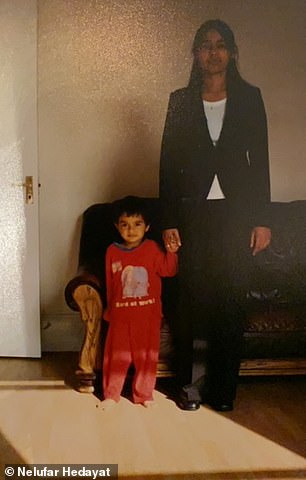 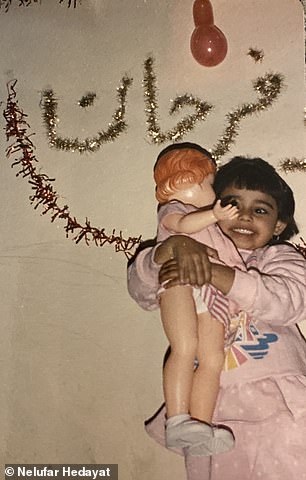 Nelufar is pictured left in 2002 in London, on her mother’s first day of work experience at a Barrister’s Chambers. She is pictured right in Peshawar, Pakistan, in 1992

Nelufar is now a regular face on British TV screens, best known for presenting CBBC’s Newsround from 2011 to 2014. She has also presented for Channel 4’s Unreported World.

While it may seem surprising the presenter knows so little about her own heritage, she explains that it’s the first time she’s spoken to anyone in her family about their journey to safety.

She says: ‘Whenever I’ve tried to ask my Mum, I saw the sadness seep into my eyes and her lips purse shut. So eventually I stopped asking, but now it’s time, my need to know how I got here as got the better than my fear of asking’.

Nelufar added to FEMAIL: ‘It was one of the hardest conversations of my life.

‘It’s so easy for people who haven’t seen war to talk about it in their land. I had my home, I had my family, my work, my status, my pride and I lost it…

‘We had managed to go our entire lives avoiding talking about the war, the traffickers bringing us here and what the three of us (my sister Mursal was with us too by now) had gone through.

In the podcast, Nelufar’s mother Patuni tells her: ‘It’s so easy for people who haven’t seen war to talk about it in their land, I had my home, I had my family, my work, my status, my pride and I lost it. I’m nothing here, I survive for you guys.’ 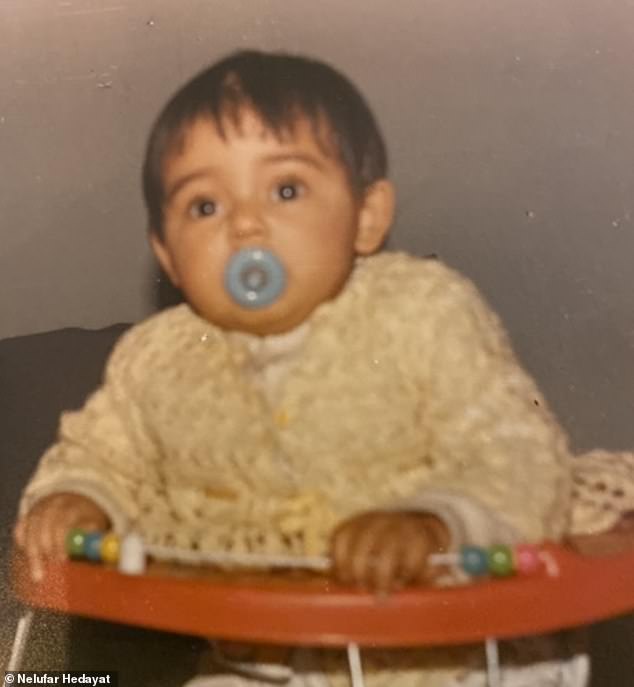 In her podcast series, Doha Debate’s Course Correction, she interviews her mother and learns of the perilous journey her family took to claim asylum in the UK, and discovers smugglers told them they were going to Germany, before landing at Heathrow.  (She is pictured aged one in Pakistan)

Breaking down into tears, Patuni tells her daughter: ‘As you see right now as a journalist around the world — and you have been in some war zones yourself — that we were running from one door to another from one place to another. Don’t — it is very hard to talk about, Nelufar. I can’t do it.

Patuni, who works as a teaching assistant at a local school teaching English to refugee children, worked as a civil engineer and often travelled abroad with her friends before turf wars between different religious and political groups broken out in her native Afghanistan. 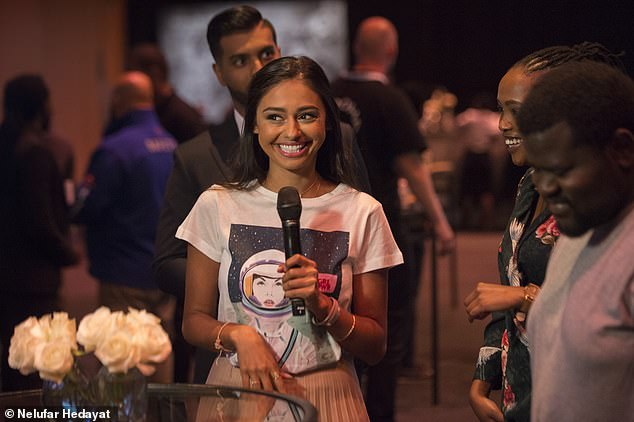 Nelufar, 32, was trafficked from Kabul to London as an infant, but is now thriving as a broadcaster

Nelufar told FEMAIL: ‘We had to get out. So we did. My mum made the perilous journey east to Pakistan for safety. They then spent five years in Pakistan, where Nelufar wasn’t allowed to go to school.

‘I remember little bits of that time – like images of myself in our home, wearing a polka-dot white dress. But after years of discrimination and difficulty, my mum knew we couldn’t build a life for ourselves.

‘I wasn’t even allowed to go to school. She says that once again, we sold everything, and paid some smugglers to get us to Germany. This time, we only got as far as Saudi Arabia, where we were stopped by the police’. 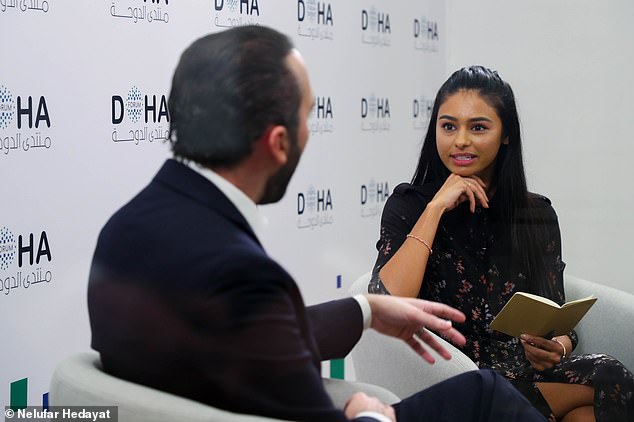 Despite trauma in her early years, Nel is now a successful broadcaster having began her career in children’s television, presenting for CBBC’s Newsround. She is pictured working for Doha Debates 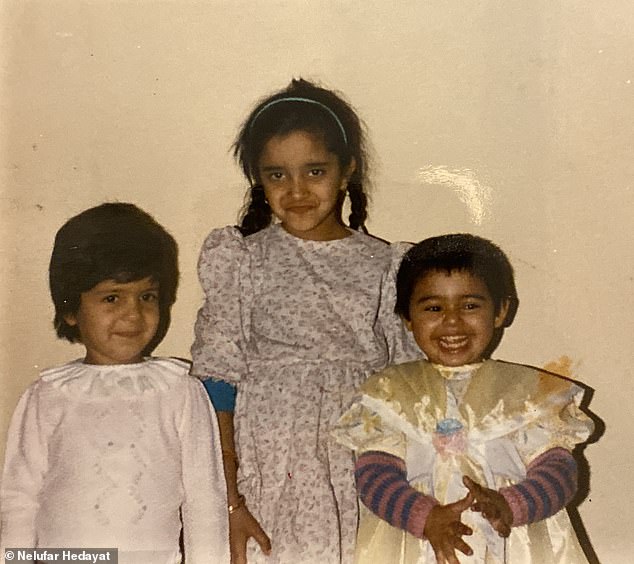 Police told Nelufar’s family they needed to leave the country within three days or face the death penalty, and they were forced to travel back to Kabul.

But soon after they were caught up in a shoot-out in Afghanistan while trying to travel to a village in the north of the country.

Patuni tells Nelufar in the podcast: ‘I blocked your eyes because there were bodies without heads on the street. There was hands without a body. There were turbans without with the head but no body. It was horrible.’

Nelufar added to FEMAIL: ‘After the shoot-out, my mum said she knew the war was never going to end. So she made the decision to seek asylum in Europe to start our new new life. So again, she went to the smugglers.

‘From a young age I got used to gun-fire, being constantly scared and seeing the pain and worry etched onto my mum’s face. 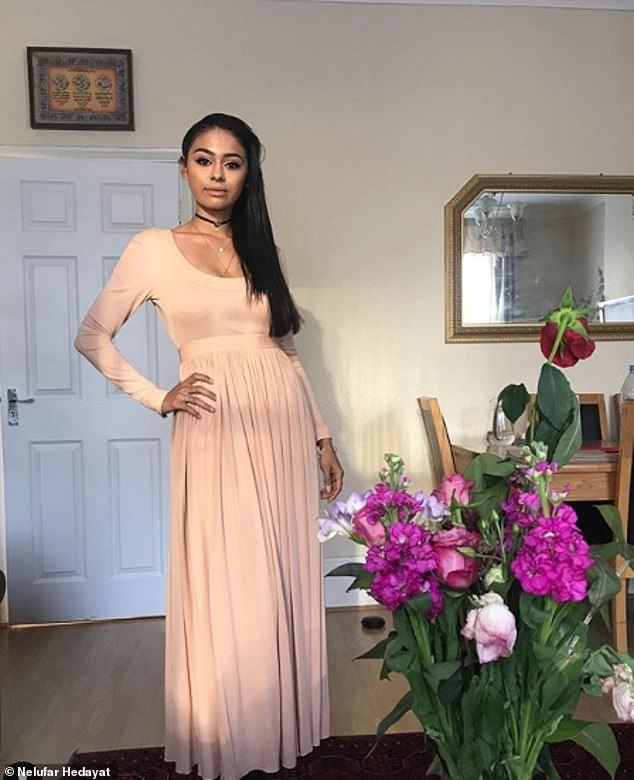 While Nel now feels ‘proud to be British’ she was originally meant to go to Germany, although she didn’t discover this until she set out to make her podcast.

Nelufar’s family then paid a Pakistani smuggler to take them to Germany, but once aboard the plane they discovered they were going to Heathrow. The journalist added this is common for refugees, who are completely at their smuggler’s mercy.

Speaking about the journey, she added: ‘It was tough. We were stranded in several cities and the trip was not straightforward. We ate what we could get our hands on, and by the end of the trip we had little to no money left so it was either going to work out and we were going to get on that flight or we weren’t.

‘Our journey took us from Kabul, Afghanistan to Peshawar, Pakistan to Jeddah, Saudi Arabia and then to London.

‘I remember being constantly worried and feeling like this was never going to end. But for my seven-year-old mind it was all just a game.’

Now 32, and a UK citizen, Nelufar feels ‘proud to be British’ and speaks English, Farsi, Hindi and Dari. 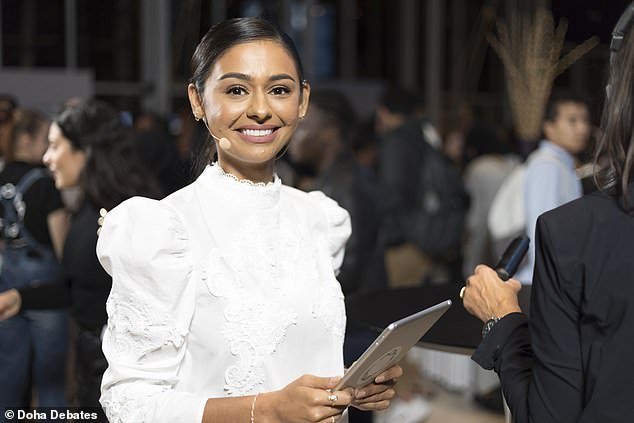 Nels’ new podcast, is sponsored by the Doha Debates, where she now works as a correspondent 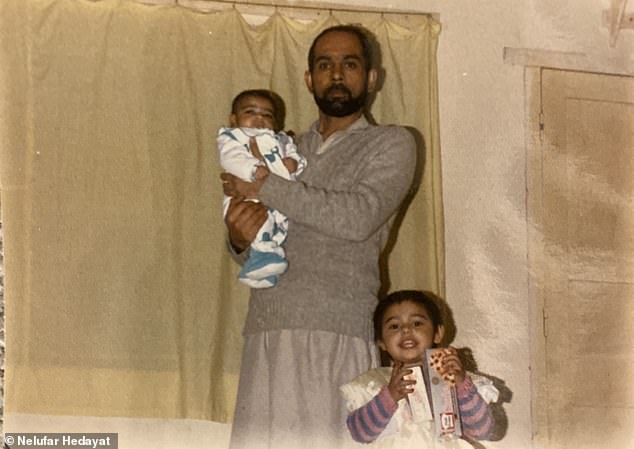 She said: ‘My life on an estate in North London was blissful. We had everything my mum had risked our lives to get: a home, a job (my mum, whose degree was not validated by universities here in the UK, was a cleaner at a B&B and proud of it) and most importantly, we were safe.

‘I remember the first time I went to school as a seven-year-old.

‘A friend, who now as a grown woman I still know and love, had no idea how to deal with me, a stranger from a strange place.

‘One of my now best friends spent the first break on the playground shouting very slowly at me,”I’m Vicky, who are you… can you speak English?” I think I was as scared of her as she was of me.

‘As a refugee fleeing war, persecution and probable death, it was the order, quiet and agreeableness of life in the UK that struck me.

‘Everything seemed to have a place, people listened to me and talked back kindly without any resentment or hate that I read and hear about so much now. 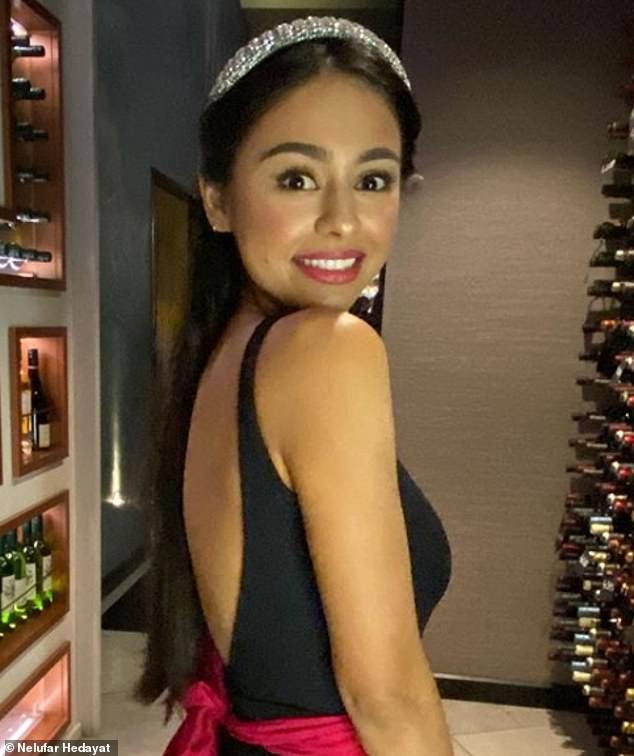 Nel, who speaks English, Farsi, Hindi and Dari, quickly adjusted to life in the UK as a child

Studying at a local school, she soon became set on becoming a journalist.

‘I grew up on a steady diet of Saturday morning kids TV. SMTV, Live and Kicking, CBBC were things I binged on and frankly it’s where I learned to speak English. I went to a local comprehensive and by the age of 15 I knew what I wanted to be a journalist.

‘But it was when I got the job of reporter on the BBC flagship show Newsround that I felt like I had to pinch myself. There I was on set of a show that as a kid I watched with glee.

‘I felt like I was giving back. That hopefully there was a little brown girl watching me do my job and thinking – “I want to do that one day”.

‘It’s been challenging in the industry. I remember growing up watching reporters and journalists who looked and sounded nothing like me.

‘There would be a tall Oxbridge educated man stood in front of a camera telling me about my own country and I knew it wasn’t true, not all true anyway. 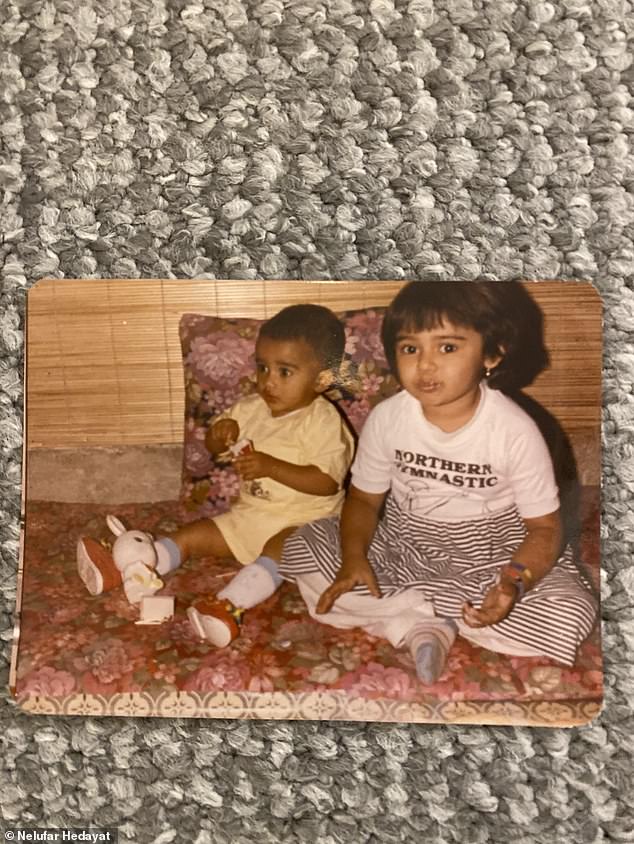 Nelufar, aged four, is pictured right with her sister Mursal, aged one, (left) in Peshawar, Pakistan

‘As a teenager, after I’d seen the Twin Towers come down and the war on terror starting in my birth-land, I felt like I was watching two different realities.

‘I’d watch the six o’clock news and see British and international forces fight this ill-planned war on terror in Afghanistan and the anchor would say, “British and American forces took another Afghan city today. Two service persons were injured and there were multiple local casualties.”

‘Then I’d turn the channel over to watch local Afghan news right after about the same incident and it was a completely different story. 300 dead. 500 injured. A major market shot to bits and mothers wailing the names of their dead children.

‘I knew then that I wanted to find a way to tell their stories. The stories of mothers and children that could have been me and my mum.

‘I’m British and proud, Afghan and proud but most importantly I’m a global citizen and so for the last 12 years I’ve poured my heart and soul into my work making documentaries shining a spotlight on those that without meaning to, we overlook’