The rider of the $100,000 horse attacked by a pitbull in a Sydney park has unleashed on the behaviour of the vicious dog’s owners who refused to provide their details and fled the scene.

Lunar was attacked by a white pitbull cross Australian bulldog in Centennial Park in the city’s inner-east on Saturday afternoon in front of a number of shocked families and passersby.

Ian Benson, Lunar’s owner, was walking her through the parkland’s horse trail when he saw the dog ‘lock on’ from about 50metres away, with the owners unable to call the animal back.

The ferocious pitbull then spent as much as five minutes attempting to bite the distressed horse, before Ian managed to grab it by the collar and pin it to the ground.

He said the dog’s owners refused to co-operate, telling them his horse was ‘fine’ before scooping up the pet and running off to their car.

‘These dogs can do a lot of damage. Last time we had an attack from a dog like that, the horse had to be put down from the injuries,’ he told Daily Mail Australia. 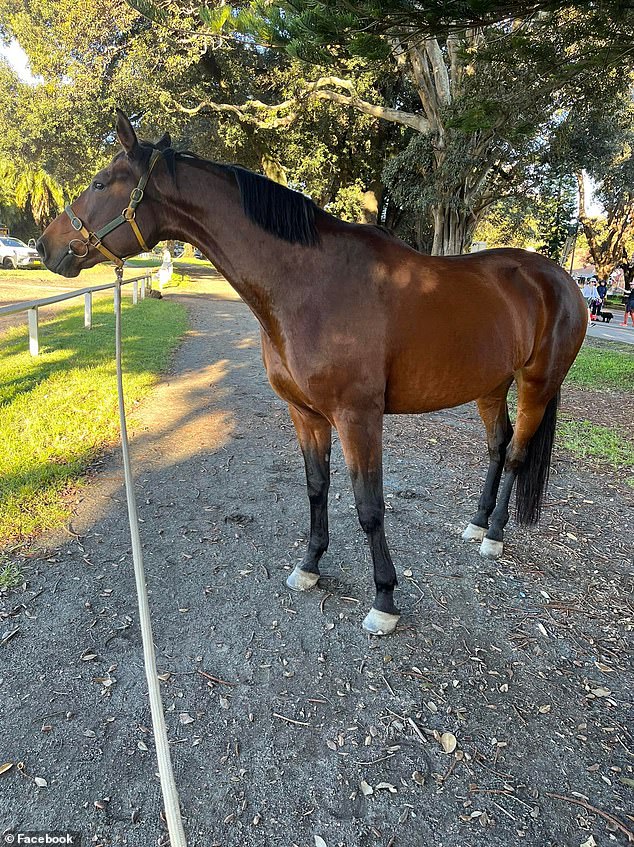 Lunar’s owner said the pitbull came bolting in from some distance, with its owner walking without a lead and unable to restrain it.

He said he was shocked the dog wasn’t killed after Lunar kicked it in the head twice trying to escape its jaws.

‘I’m amazed it’s not dead,’ Ian said. ‘It was kicked twice in the head. I did everything I could to get it away but it wouldn’t stop.

Lunar ‘amazingly’ suffered no injuries from the attack, but the rider said it was the second incident they’d had with a dog that week.

‘It’s not even about the breed of the dog, if you get any sort of dog go after a horse, if a young girl is on a pony, the rider can get dropped,’ Ian said.

‘A horse will try to gallop home naturally, a family of four could be driving past and see a horse jump through the windscreen.

‘Generally speaking dogs realise after a second or two they’re outmatched or outsized. Lunar is good with dogs too, she’ll just stand there.’ 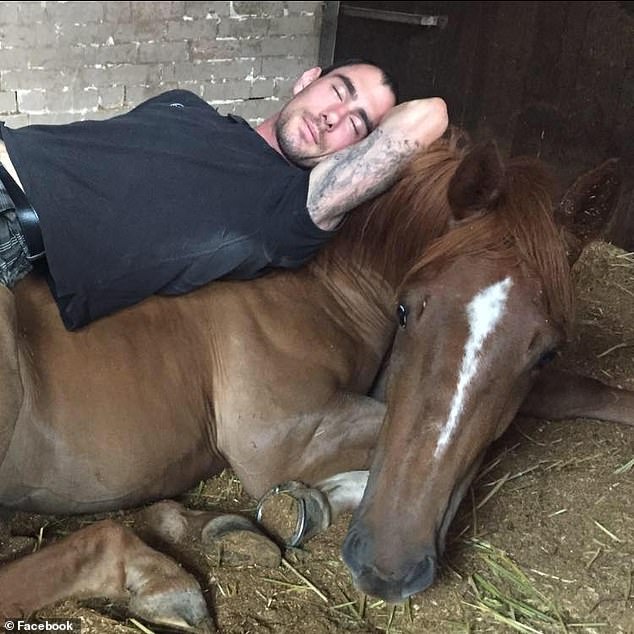 Ian said the most disappointing part of the incident was the unwillingness of the pitbull’s owner to exchange details or show any remorse over the situation.

‘After it all finished and I caught the dog and pinned him down, I told him to keep his dog on a lead and asked for his license and phone number. He asked why, and I said because your dog attacked my f***ing horse,’ he told Daily Mail Australia.

‘He told me my horse was fine, that I didn’t need his details and scooped up his dog and ran off.

‘I’m dealing with a 750kilogram animal who is startled, I can’t go chasing after him to get his details. Thankfully she was fine because to call a vet out alone is $200.’

He lamented the lack of responsibility the owner showed.

‘If a dog attacks someone, the owner is liable. If my horse runs away as a result of this dog and hits a mother pushing a pram it’s my fault,’ Ian said.

‘I’ve had incidents in the park before and they’ve always been good enough to hand over details and that be that. You can’t run away.’

The pitbull owner was fined $330 for having the dog off-lead on the horse track, and rangers told Ian he had asked them for his number to apologise, after the incident had gotten to the media. 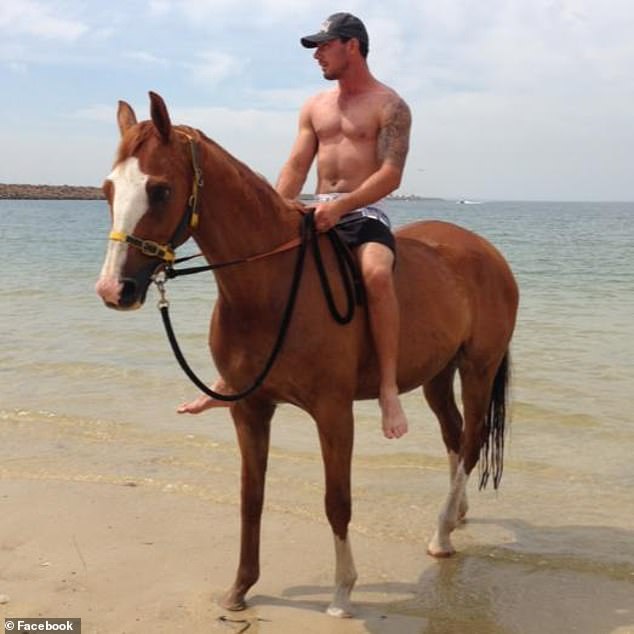 ‘I’m dealing with a 750kilogram animal who is startled, I can’t go chasing after him to get his details,’ owner Ian told Daily Mail Australia

The attack was caught on camera by local resident Shannon Bishop, who described the incident as ‘awful.’

‘I saw the horse rear up on its hind legs and thought s**t what’s going on there?’ she told Daily Mail Australia.

‘Then I saw the dog. I was absolutely shocked at how aggressive the dog was, I could see it trying to snap at the underbelly of the horse. It was also snapping at the legs.’

The pitbull repeatedly runs back and forth attempting to dodge the good Samaritans trying to block it from taking more chunks out of horse’s hind legs.

Lunar eventually kicks the dog off him with a powerful defensive swing. 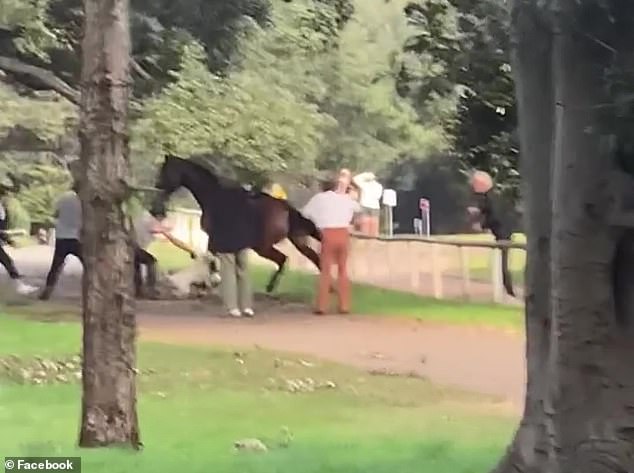 The attack was caught on camera by local resident Shannon Bishop, who walked into the section of the park several minutes into the attack

Eventually Ian grabs the dog by the collar and swings it away, before the animal’s two owners scoop him up and run away without even offering an apology.

‘It was awful to see,’ Ms Bishop said of the pair, who were ‘without any regard’ for the horse.

‘I was incredibly shocked at how useless the dog’s owners were, at one stage they were attempting to block the dog but it went on for ages. It was quite confronting,’ she told Daily Mail Australia.

‘I really was afraid it was going to get the horse.’ 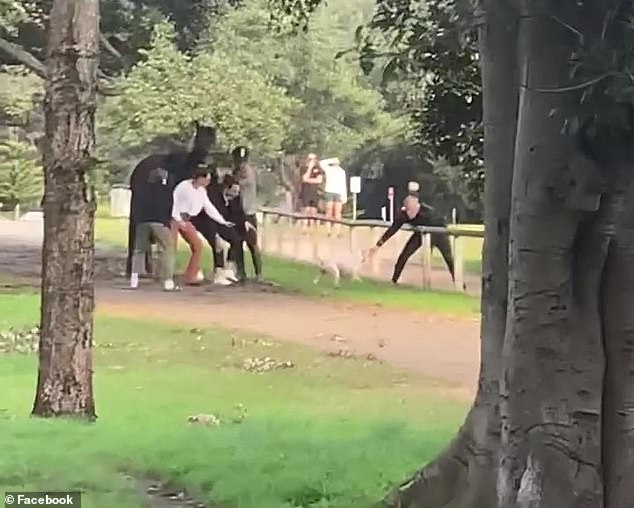 In a statement to Daily Mail Australia, a spokesperson for the Parklands said the incident was currently being investigated.

‘Dogs are prohibited from being walked on the horse track and must be on-leash in all other areas inside Grand Drive,’ they said.

‘Fines may be issued pending the outcome of the investigation.’