Dog buried alive on Hawaii beach after being cut with a rusty machete starts recovery after being found ‘incredibly swollen, sunburned and missing 90% of her fur’

A dog that was cut with a rusty knife and then buried alive on a beach is starting to make a recovery after being rescued.

Little Leialoha the dog was discovered under the sands of O’ahu beach ‘incredibly swollen, sunburned and missing 90 per cent of her fur’ on Tuesday.

PAWS of Hawaii was alerted to the dog’s burial site by a Good Samaritan who spotted a man burying her in the sand.

Slash marks on her front left leg led the rescue team to believe that a rusty machete buried alongside her was used to cut the animal.

In horrifying pictures, the dog can be seen with red-raw skin and her head barely sticking out of the sand. 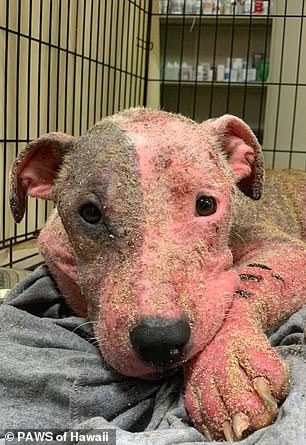 Leialoha the dog was discovered buried in the sand (left) after having her front left paw hacked at multiple times with a rusty machete. She was rescued by PAWS of Hawaii and was taken into their care (right) 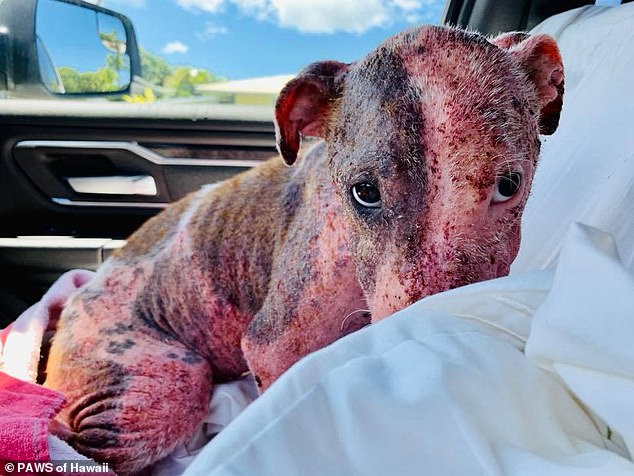 Leialoha (above) was left ‘incredibly swollen, sunburned and missing 90 per cent of her fur’ after being buried in the sand 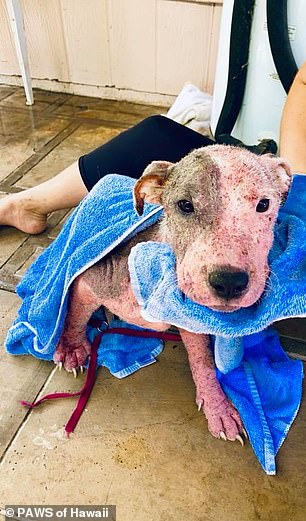 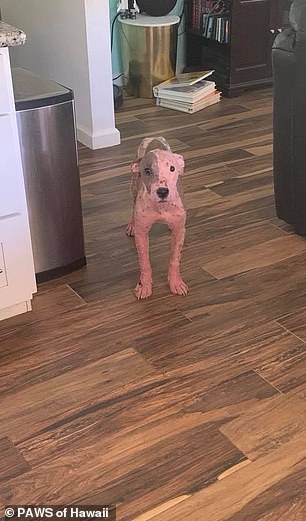 Leialoha is now with temporary foster carer Amanda for two months, who has said that she is beginning to socialize with people again (right). Previously she would hide in her cage apart from when she needed to go to the bathroom

She received care from Aloha Affordable Veterinary Services who believed she had a ‘severe skin disease and dehydration.’

After a public plea to find a two-month foster carer for the dog, Good Samaritan Amanda offered to take her in.

‘My heart was broken and I knew she needed us to foster her,’ Amanda wrote online.

Previously, Amanda reported that after the dog’s first bath on Thursday Leialoha was ‘bleeding from every inch of her body.’

Since then she’s made vast improvements in both her health and confidence.

Foster mom Amanda reported back that she was also beginning to interact with people again, after previously only leaving her kennel to go to the bathroom.

‘Last night, she came out, while we had friends over to see what was for dinner and has been liking being under the coffee table,’ Amanda wrote. ‘She has a long way to go, but the worst is over.’

To find out more information or to donate visit here. 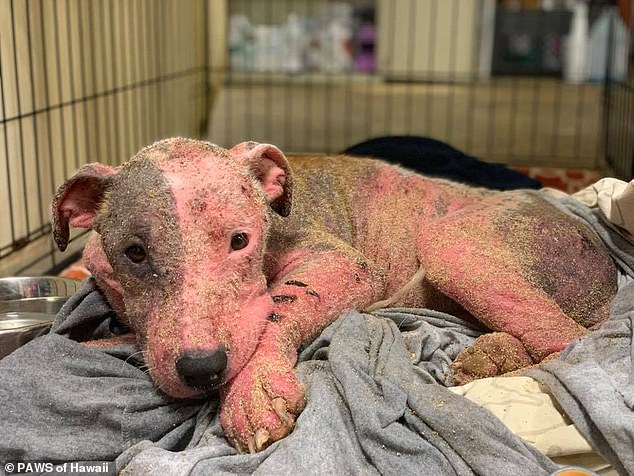 Adorable Leialoha (above) shortly after being rescued by the team at PAWS of Hawaii. Her skin was still coated in sand and she was missing 90 per cent of her fur 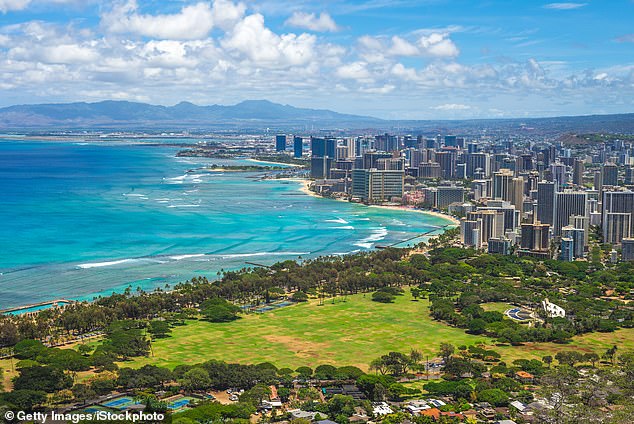 PAWS of Hawaii was discovered on O’ahu beach (above) on Tuesday, buried in the sand after a man cut her left front paw