Dog is fire brigade’s weapon to help track down criminals

A three-year-old cocker spaniel has been trained to sniff out possible causes of fires.

Dexter, a fire dog, has investigated over 200 fires with his handler Dave Coss, detecting substances such as petrol in the aftermath of a blaze.

He is one of 15 specially trained fire dogs in the country, who work closely with their handlers and are rewarded with treats once a mission has been successfully completed.

Dexter and his handler Dave (pictured) are a team who work together to investigate fires in Derbyshire, Leicestershire, Nottinghamshire and Lincolnshire

The duo travel across Derbyshire, Leicestershire, Nottinghamshire and Lincolnshire to help teams work out how the fires started.

They have helped fire investigation teams to secure a higher level of accuracy which has improved the conviction rates for arson, says Dave.

He said: ‘He’s a really hard worker and no two days with him are the same. ‘I really enjoy working with Dexter and the work he does is really important. It’s the best job in the fire service.’ 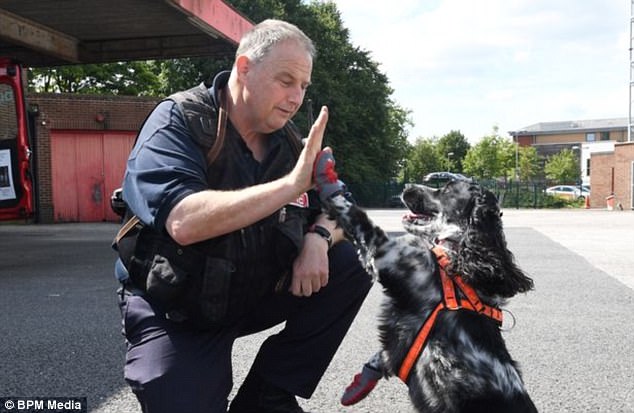 Fire dogs are selected at a young age, based on how much they like to play and the potential they have to follow orders from handlers

Dexter never goes in unprepared to the scene of a fire. He has special boots that are used to protect his paws from glass and other sharp objects while he is carrying out his work.

Dogs are never sent to the scene where it is still hot or while a fire is  still burning, and there has so far never been an injury to a fire dog across the country, according to the London Fire Brigade.

It’s not just boots Dexter has to wear, though. He also has a harness he has to wear when he needs to work at heights, a life jacket if he is working near water and even a hazardous materials suit to keep him safe from harmful chemicals. 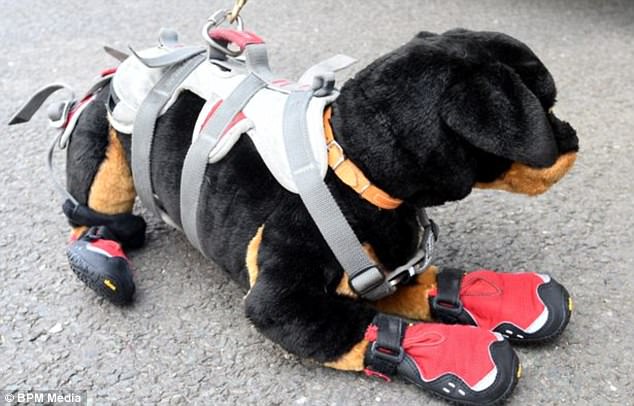 The three-year-old pup as a harness he has to wear when he needs to work at heights, a life jacket if he is working near water and even a hazardous materials suit to keep him safe from harmful chemicals

Dexter works hard to help the team at the scene of fires but sometimes finds himself getting into trouble with his handler, according to Dave.

‘He’s jumped out of a first-floor window before when we have been on a job. ‘He also ate some rat poison on another job. He was lucky I saw him do it, because we got him straight to the vet, where he was treated. Luckily, he was all right. I don’t think he’ll be doing that again.’ 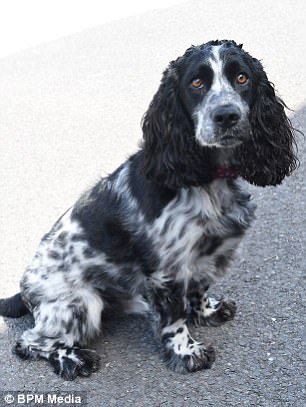 Dexter ends his day by watching TV with Dave

Fire dogs are selected at a young age, based on how much they like to play and the potential they have to follow orders from handlers.

The pups then undergo a training programme, where they learn how to detect an ignitable substance and are rewarded each time they do.

While attending fire safety college for dogs, the pooches are tested on various disciplines, such as finding traces of a substance in a single room, in multiple rooms and in hard-to-find areas such as letter boxes and under stairs.

At the end of the work day, Dexter goes home with Dave to kick off his boots, lie back on the sofa and watch TV.