Dog meat has been discovered on sale in Shanghai restaurants just days before the city hosts the 2019 World Dog Show.

Animal rights campaigners said 22 dogs had been rescued from a slaughterhouse after three restaurants in the Chinese city were found to be offering dog meat soup.

One of the restaurants offered several dog meat dishes on its menu and also advertised the product in its window.

The dogs, including a poodle and a French bulldog, are suspected to be stolen pets, according to Humane Society International.

Captive: A dog peers out from a pink-coloured cage at the slaughterhouse in China where animal rights activists discovered 22 of them in 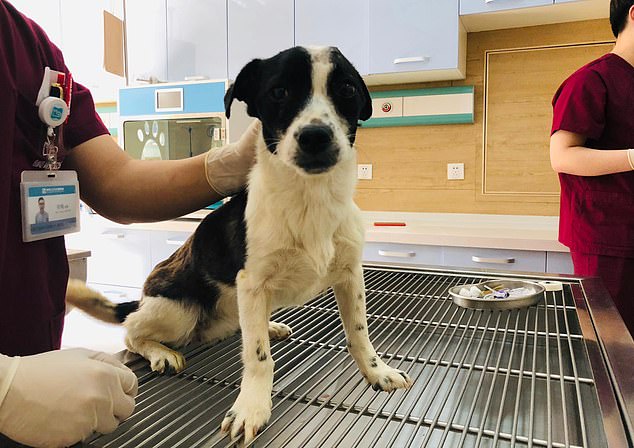 Treatment: One of the dogs is given veterinary care at a shelter in northern China after they were rescued from slaughter in Xuzhou 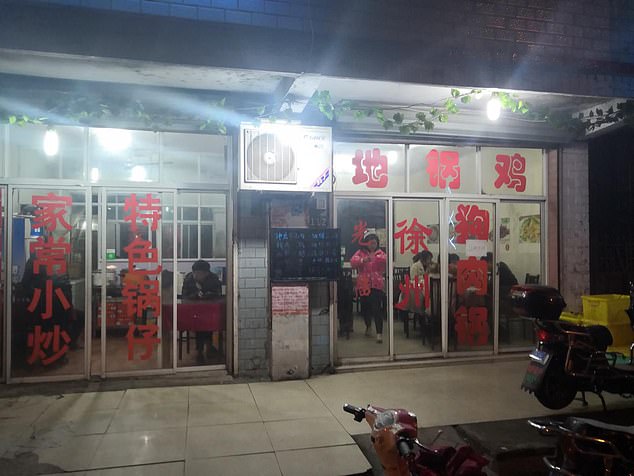 On the menu: A restaurant in Shanghai, only 12 miles from the venue for the 2019 World Dog Show, which offered dog meat on its menu

A sign at the restaurant said the meat was supplied by slaughterhouses in Xuzhou city in Jiangsu.

When HSI activists travelled there they found 22 dogs cowering in the corner after they had seen their fellow animals beaten to death.

After finding evidence they were stolen – including discarded collars – they managed to negotiate the animals’ release and save them from slaughter.

Activists said the dogs ‘were clearly terrified, but they all responded to human kindness and sought our comfort’ – another sign they had once been pets.

The freed dogs were taken to an animal shelter in northern China for veterinary care before they are put up for adoption.

The dog show, which begins tomorrow, bills itself as a ‘joyful gathering for dog lovers and lovely dogs across the world’. 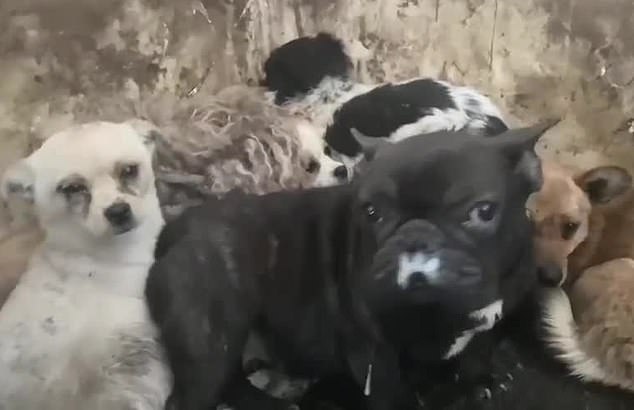 Scared: The dogs look at the activists who had come to the slaughterhouse. Rescuers said the dogs ‘were clearly terrified, but they all responded to human kindness and sought our comfort’ 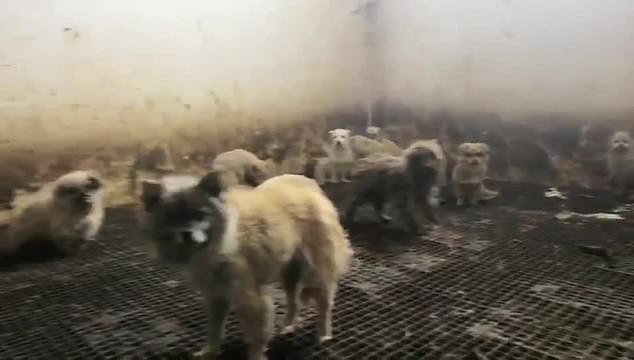 Trapped: The captive dogs look up at their rescuers in the slaughterhouse, which was advertised by one of the restaurants selling dog meat 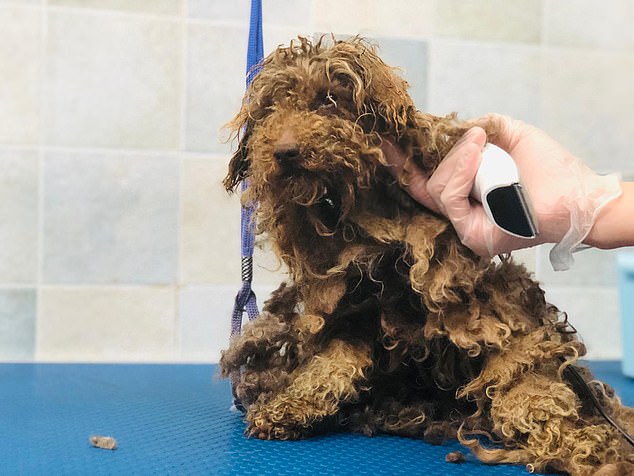 Haircut: A dog is shaved at the facility in northern China following its rescue by activists who suspect many of the animals were stolen pets 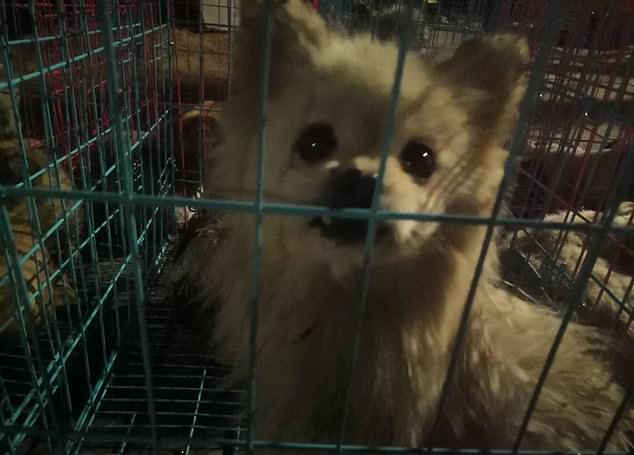 Terror: A small dog cowers inside a cage after it was found by activists, who said the animals had seen their cage mates beaten to death 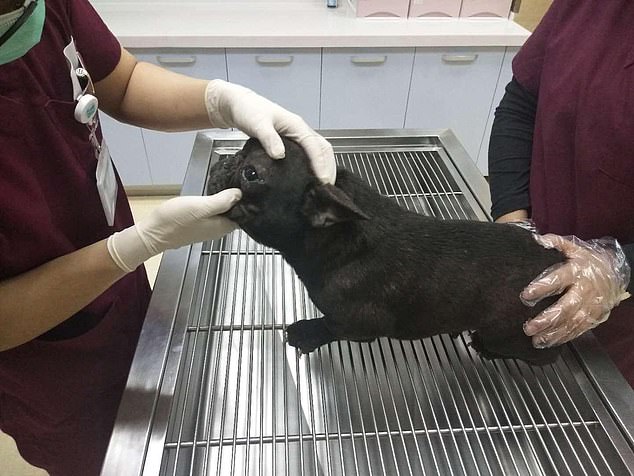 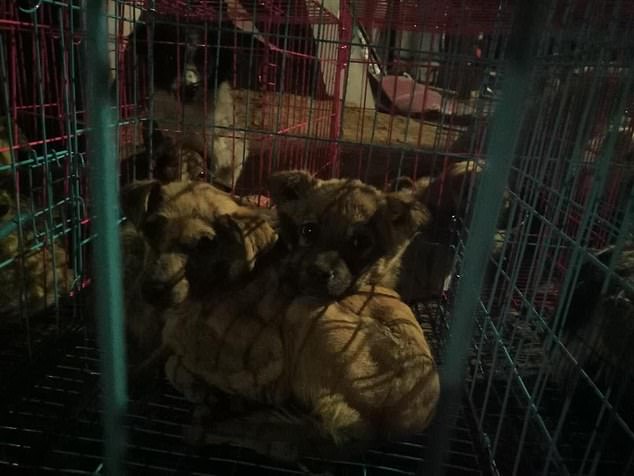 Scared: Two of the dogs – believed to be stolen pets because of a nearby pile of dog collars and the way they behaved towards their rescuers – are seen in their cage

The shelter is planning an adoption event for local dog lovers and some of the rescued animals will be flown to the United States to help them find loving homes.

Dr Peter Li of HSI said: ‘This investigation exposes the horrifying way that millions of China’s dogs are abused for the meat trade while others are pampered for the pet trade.

‘The slaughter operation where the 22 terrified dogs were rescued could easily have supplied the Shanghai restaurant that claimed to get its dog meat from Xuzhou.

‘Most of the rescued dogs are small, lap-dog breeds typical of pets in China, and the activists found a pile of collars in the corner of the slaughterhouse, so there is every likelihood that these dogs were stolen pets.

‘It’s a double standard that enrages many dog lovers throughout China, who are frustrated at how this illegal trade is allowed to continue. 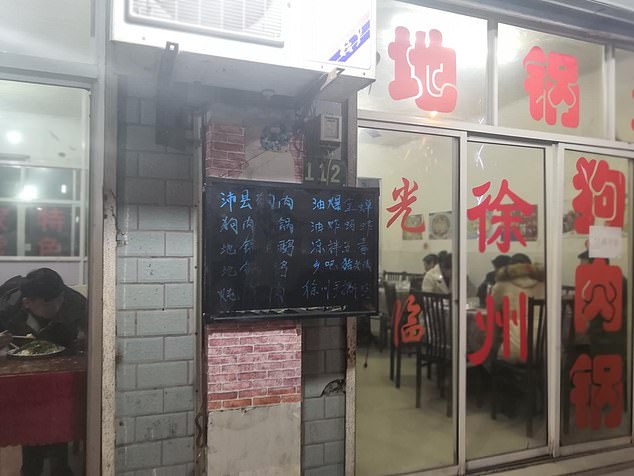 On sale: A restaurant which sells dog meat and which advertises the dog processing plant where they claim their dog meat comes from 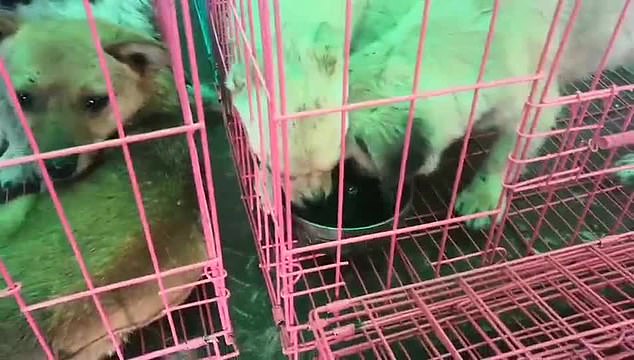 Packed in: The cages at the slaughterhouse are kept close together as one of the dogs appears to eat or drink from a bowl 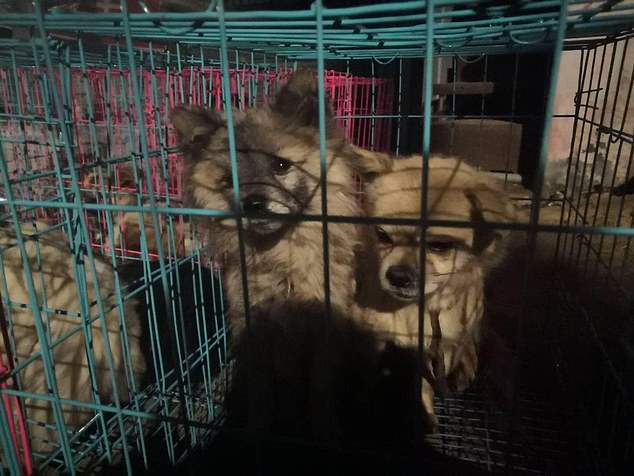 Captivity: Two of the dogs stay close to each other inside a cage, at the slaughterhouse where they were to be killed and turned into dog meat soup 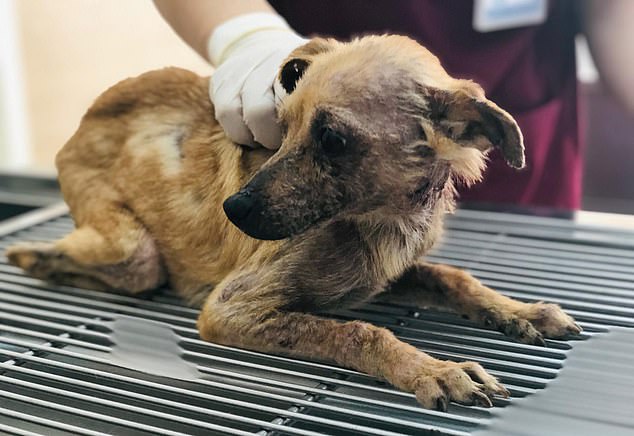 Safety: A dog sits on a surface as it is treated at a shelter, which is planning to put some of the animals up for adoption in China and have others flown to the United States 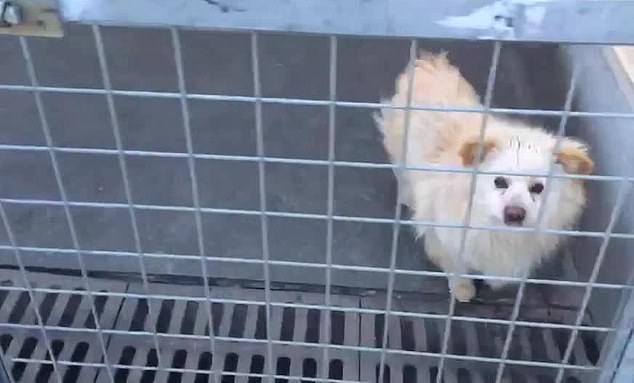 Behind bars: A light-coloured dog peers out from its cage as rescuers find the 22 animals

‘Most people in China don’t eat dogs, and the World Dog Show is a prime example of a growing, younger, and more affluent Chinese population who love their canine companions and despise the dog thieves who steal their friends for the meat trade.

‘It also demonstrates the huge economic benefit to China of this booming pet care industry, versus a dog meat trade that acts as a stain on China’s reputation.

‘We urge China to act to end its brutal dog meat trade.’

Later in the year the 11th annual Yulin Dog Meat Festival is expected to take place in southern China.

The notorious event sees thousands of dogs and cats driven across the country on the back of slaughter trucks to be killed and eaten, according to activists. 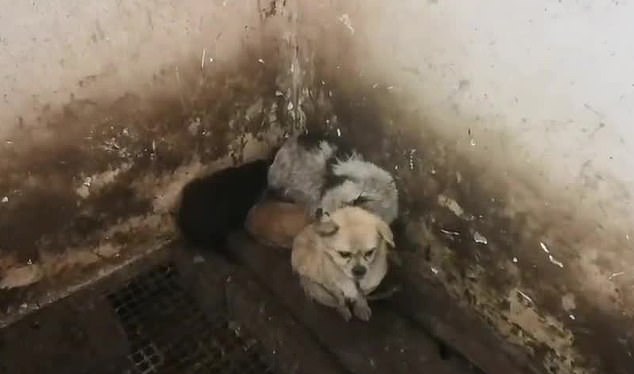 Cowering in the corner: The animals huddle together against two walls after seeing their fellow dogs slaughtered to be turned into meat 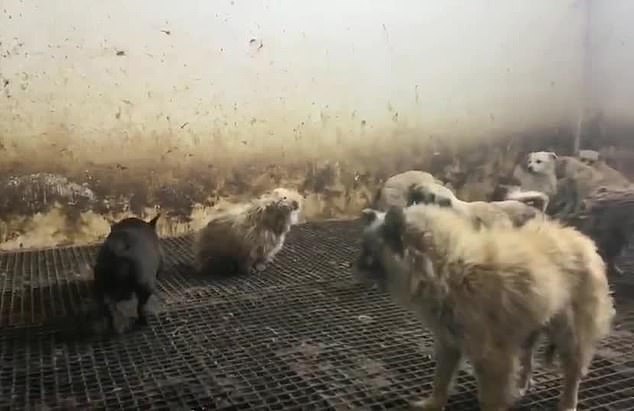 Miserable: The animals are kept in dingy conditions with dirty walls and floor 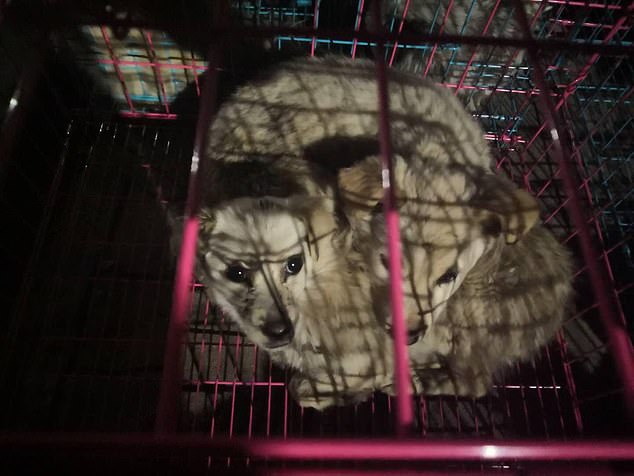 Looking up: Two of the dogs peer out of the top of their cage at the slaughterhouse in China 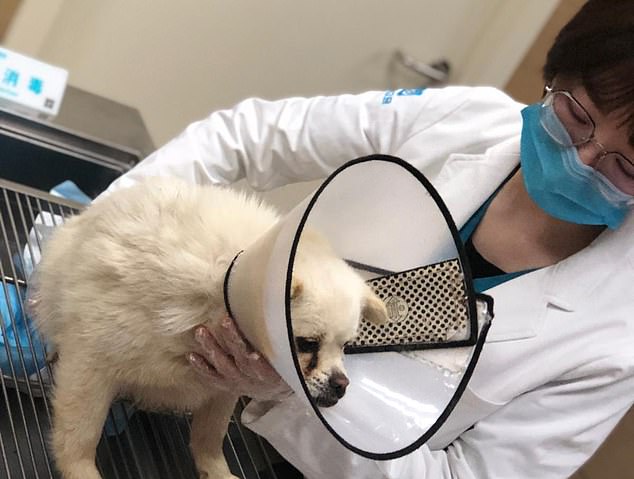 Treatment: A dog wearing a guard around its neck is treated in southern China after its rescue 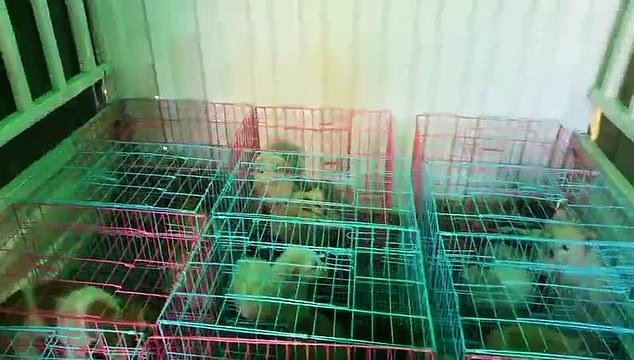 Battery farming: The dogs were kept in these small cages at the horrifying facility in China