Seville’s council is to fine dog owners for not carrying bottles of disinfectant to wash away their dog’s urine.

Authorities are to trial the new rule for a month after residents complained about the stench of dog urine filling the streets in Spain.

The police will also hand out fines for pet owners who don’t use the disinfectant after their hound has micturated.

Seville is following the city of Almeria, which has required dog owner’s to carry a water and vinegar solution since July.

Indeed, the scourge of dog defecation is rife across Spain, with many towns taking great pains to combat the issue, according to The Local.

Other towns have employed private poo detectives and in 2016 the city of Torrelodones installed a nine foot inflatable poo in the town square to highlight the issue. 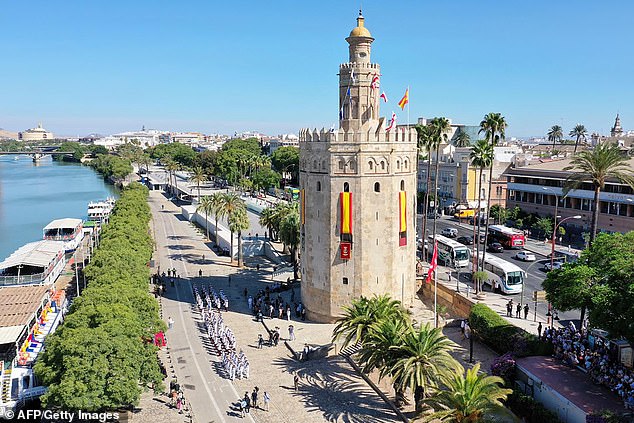 The Torre del Oro, the maritime museum in central Seville, a city famed for its bitter oranges

Meanwhile in the city of La Coruna this year, DNA testing was brought in to find owners responsible and then charge them for the cost of DNA analysis.

Another campaign in Madrid several years ago used remote control cars shaped like faeces to chase down offending owners, bearing the message, ‘Don’t leave me, pick me up!’

Seville’s citizens currently face fines in the range of £30 to £80 for their dog messing, although that can rise to more than £900.