Dog photographed on a Virgin train sends Twitter into meltdown

A photo of a gleeful-looking Poodle on a Virgin Train that was posted on Twitter has melted hearts and outraged passengers in equal measure.

The dog was sitting upright on a carriage on a Virgin Trains service when it was photographed by a fellow passenger.

Virgin Trains shared the image on social media claiming it would be ‘too cute not to’.

However, the dog’s owner has received criticism on Twitter for allowing their pet to sit on the seat. 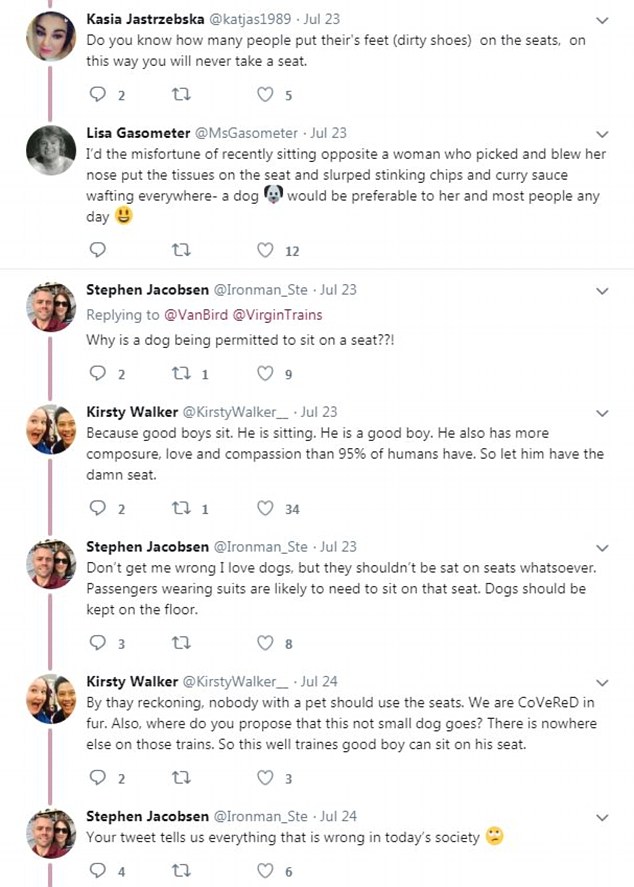 A Twitter user posted the photograph of the dog claiming it was the ‘best passenger ever’.

Others took the opportunity to post their photographs of dogs on trains.

However, some fellow social media users were far less charitable.

Tom McCormack tweeted: ‘Thinking of the person next to sit in that seat, would you want to pay the price of travelling on a Virgin Train and then get dog hairs on your clothes.

Another user wrote: ‘Dogs sat on the seat – so that rules out people who suffer from pet hair allergies from travelling on Virgin trains.

‘Disgusting a dog sat on a passenger / human seat. No infection or disease control and against policies having a dog on a seat.’

One user complained about the behaviour of passengers. She was supported by Lisa Gasometer who wrote: ‘I’d the misfortune of recently sitting opposite a woman who picked and blew her nose put the tissues on the seat and slurped stinking chips and curry sauce wafting everywhere.

‘A dog would be preferable to her and most people any day.’

Kirsty Walker wrote: ‘Good boys sit. He is sitting. He is a good boy. He also has more composure, love and compassion than 95 per cent of humans have. So let him have the damn sea.’ According to Emma Chesworth, ‘this dude’ pictured made her entire day 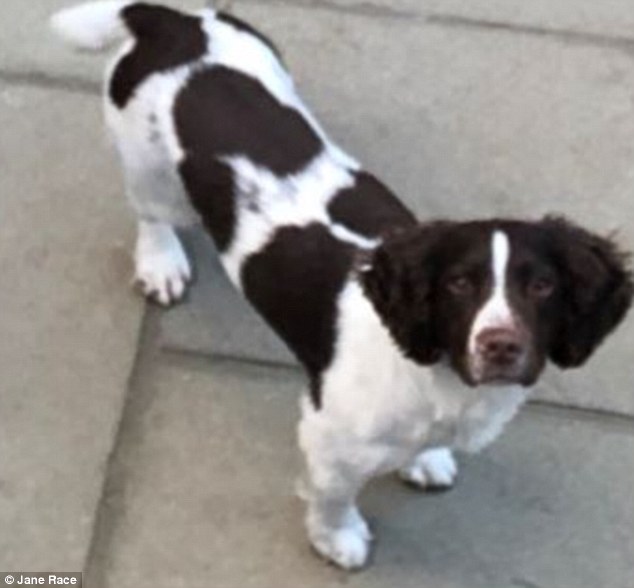 This dog, pictured, looks like he’s enjoying himself given that there are very few other people on the carriage

Stephen Jacobsen commented: ‘Don’t get me wrong I love dogs, but they shouldn’t be sat on seats whatsoever.

‘Passengers wearing suits are likely to need to sit on that seat.

‘Dogs should be kept on the floor.’

A woman known only as Vanessa added: ‘His parents said this is his preferred way to travel. He’s so perfectly behaved too. Much better than people.’

A Virgin Trains spokesperson said: ‘We loved the photo of our furry passenger – it was just too cute not to share.

‘Where space is available for furry friends to take a seat, we ask customers to pop a blanket on the seat before they both sit down to enjoy the journey.’ 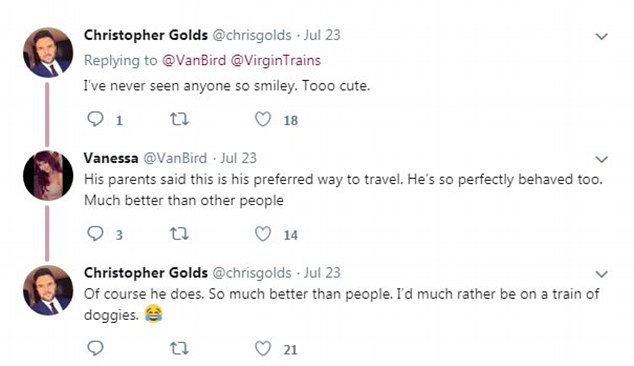 However, one person on Twitter  claimed he’d prefer to be on a carriage with dogs and not fellow members of the public