Bounty hunter Duane ‘Dog’ Chapman broke down in tears outside his home as he described holding his wife Beth in her final moments, as she asked him to repeat Jesus’ name.

Speaking in Hawaii on Wednesday afternoon, Chapman said: ‘When she had an attack I didn’t know anything to do but to say “in Jesus’ name” and hold her and when I said “in Jesus’ name” she said, “Say it again, say it more.”‘

Holding back tears, Chapman continued: ‘And then she, you know, she told the girls and everybody with her mouth and stuff she said I love you guys, are you guys all OK? But she never accepted it.’

Beth died early on Wednesday at Queen’s Medical Center in Honolulu after an almost two-year battle with throat cancer. She was 51.

News of her death was shared by her husband, who shot to fame alongside his wife on the popular reality show Dog The Bounty Hunter.

‘It’s 5:32 in Hawaii, this is the time she would wake up to go hike Koko Head mountain,’ wrote Chapman. ‘Only today, she hiked the stairway to heaven. We all love you, Beth. See you on the other side.’

He told reporters outside his home of his stunned disbelief at losing Beth, saying: ‘So amazing. This is totally unbelievable.’

Dog the Bounty Hunter broke down outside his home in Hawaii on Wednesday afternoon as he described holding his wife Beth: ‘When she had an attack I didn’t know anything to do but to say “in Jesus’ name” and hold her and when I said “in Jesus’ name” she said, “Say it again, say it more.”‘ 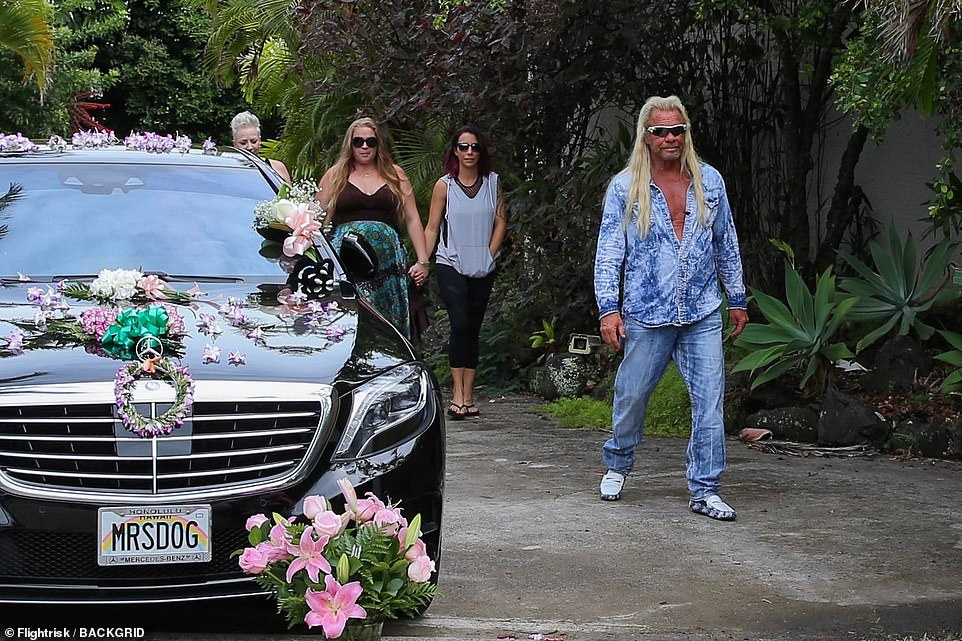 Duane Chapman walked out with his daughter to speak to reporters following the death of his wife earlier in the day, as they stood alongside a black Mercedes adorned with flowers and featuring a ‘Mrs Dog’ number plate 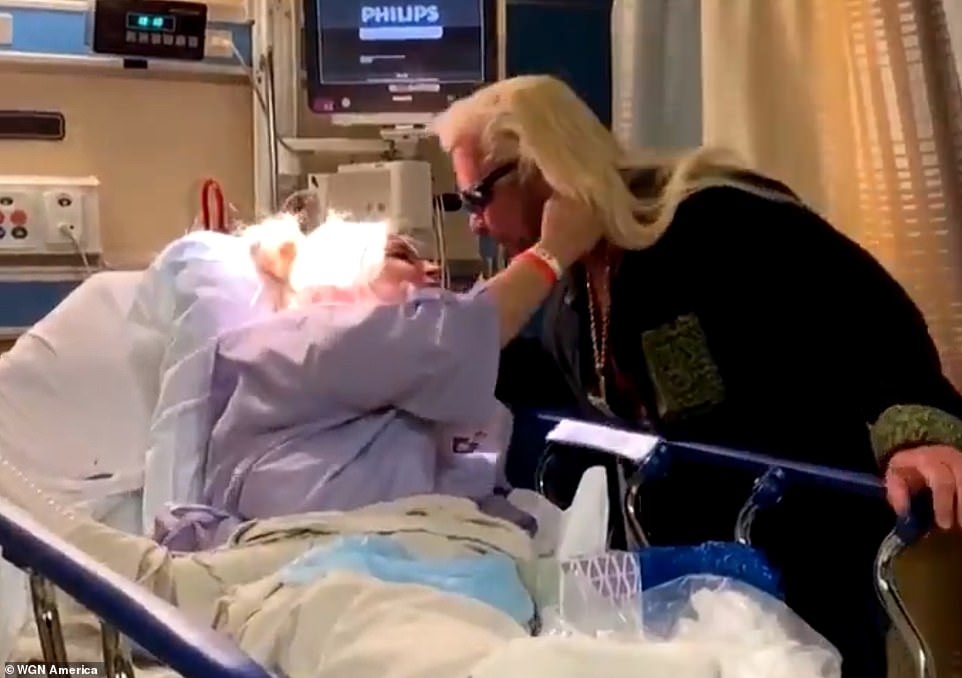 Struggle: She was diagnosed with stage II throat cancer in 2017, but after having a tumor removed was declared cancer-free in December of that year 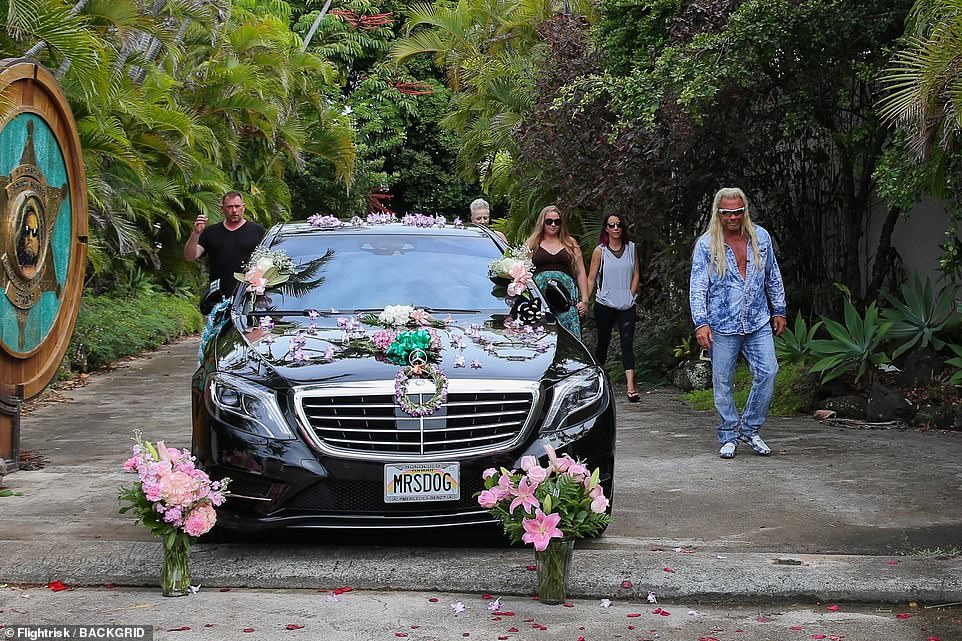 Dog the Bounty Hunter walks out with his family to speak to reporters, he described his stunned disbelief: ‘So amazing. This is totally unbelievable’ 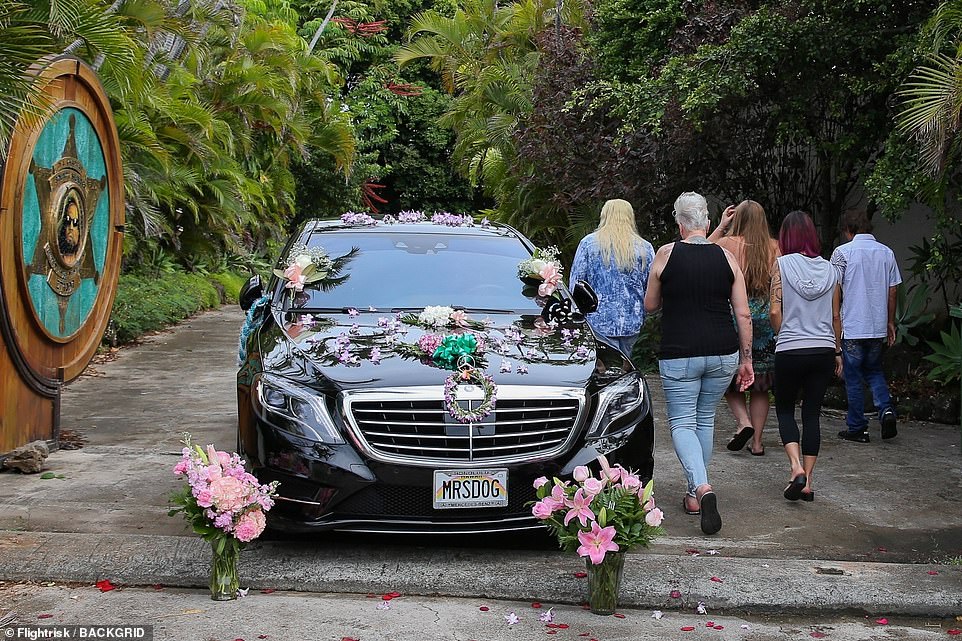 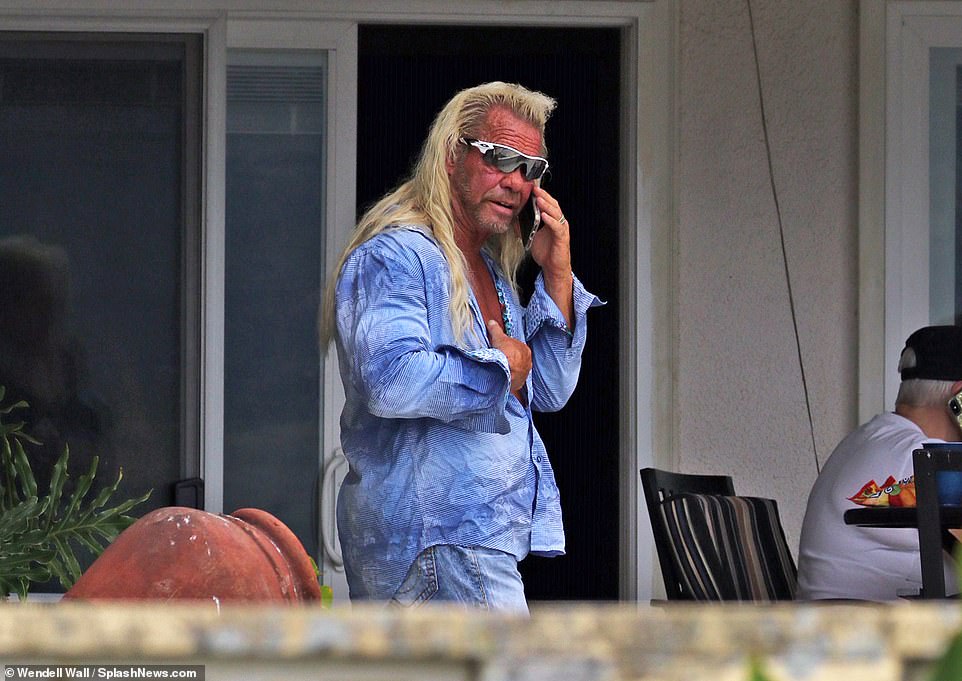 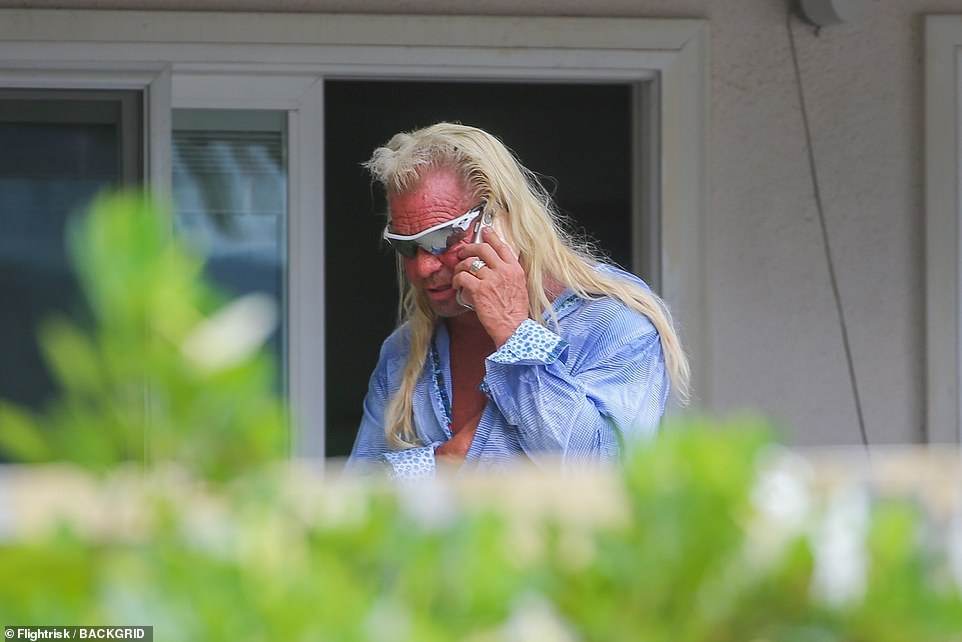 Before speaking to reporters yesterday evening, Dog was spotted in a heartfelt phone conversation as he paced outside of his family compound in east Honolulu.

In addition to her husband, Beth is survived by her four children – Dominic, Cecily, Bonnie Jo and Garry – and 14 grandchildren.

Beth was given custody of one of her grandchildren after Chapman’s daughter died in a car crash.

Bonnie Chapman paid tribute to her mother on Twitter as well on Wednesday.

‘So thankful to call you my mother,’ she wrote with a photo clutching her mom’s hand.

Bonnie later wrote: ‘I never thought I’d lose my mom at 20. I told her I thought she had a couple years left, but her eyes disagreed.’

Chapman passed away at Queen’s Medical Center in Honolulu just a few days after being placed in a medically induced coma over the weekend.

Funeral services are also expected to be held in Honolulu later this week according to a spokesperson for the family. 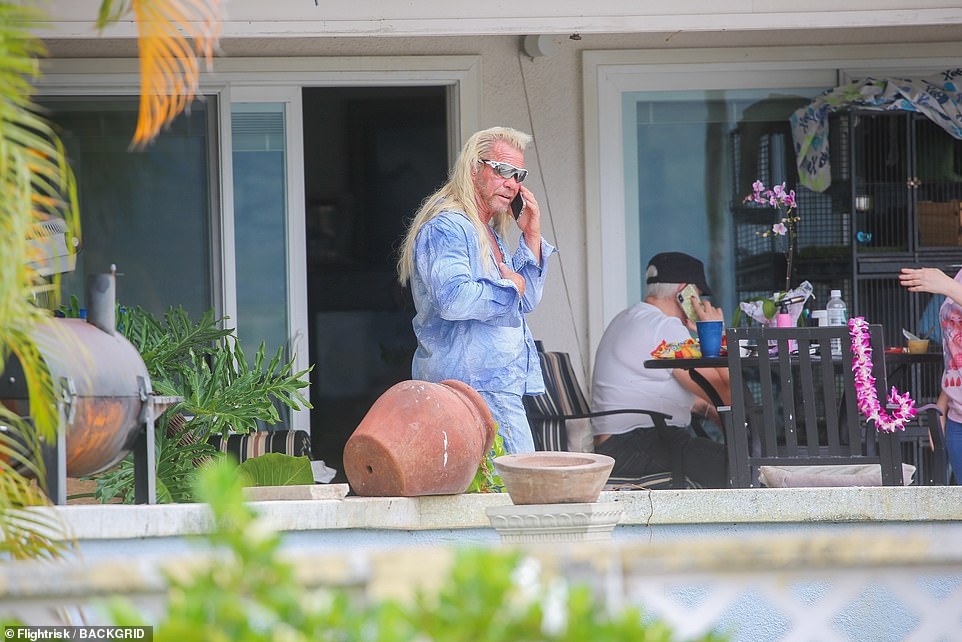 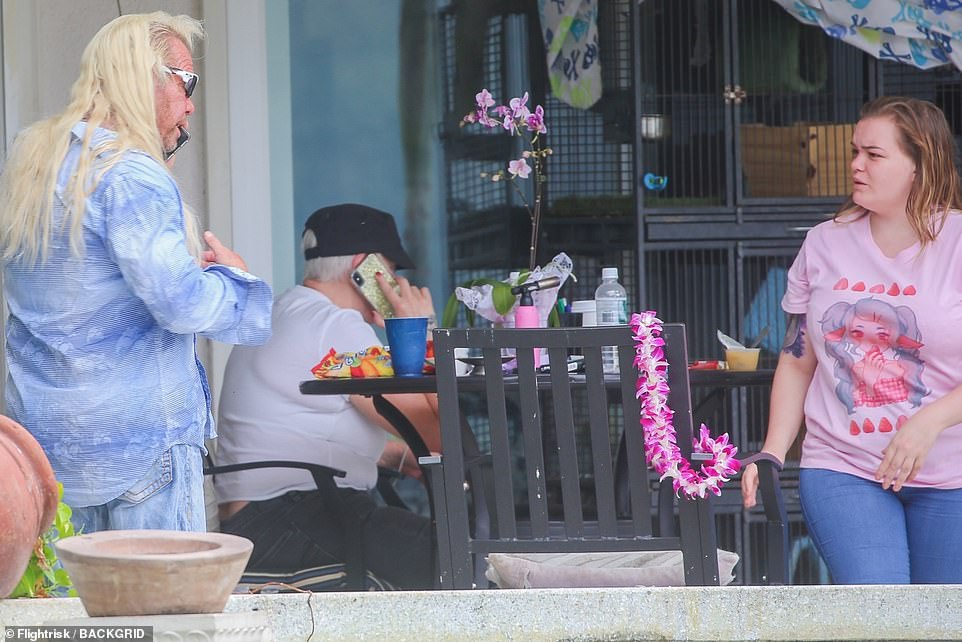 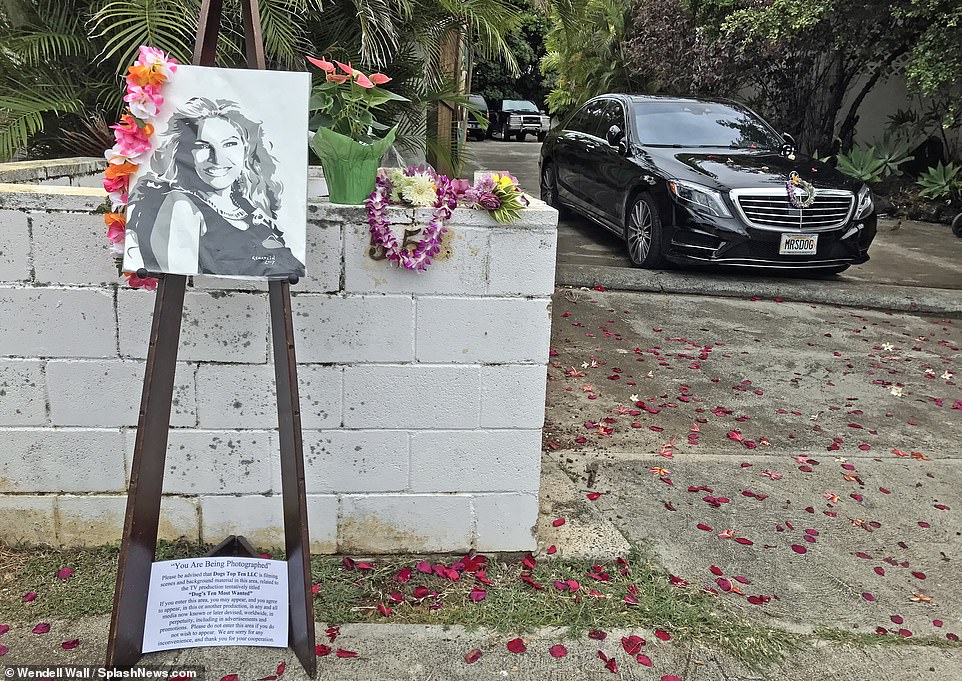 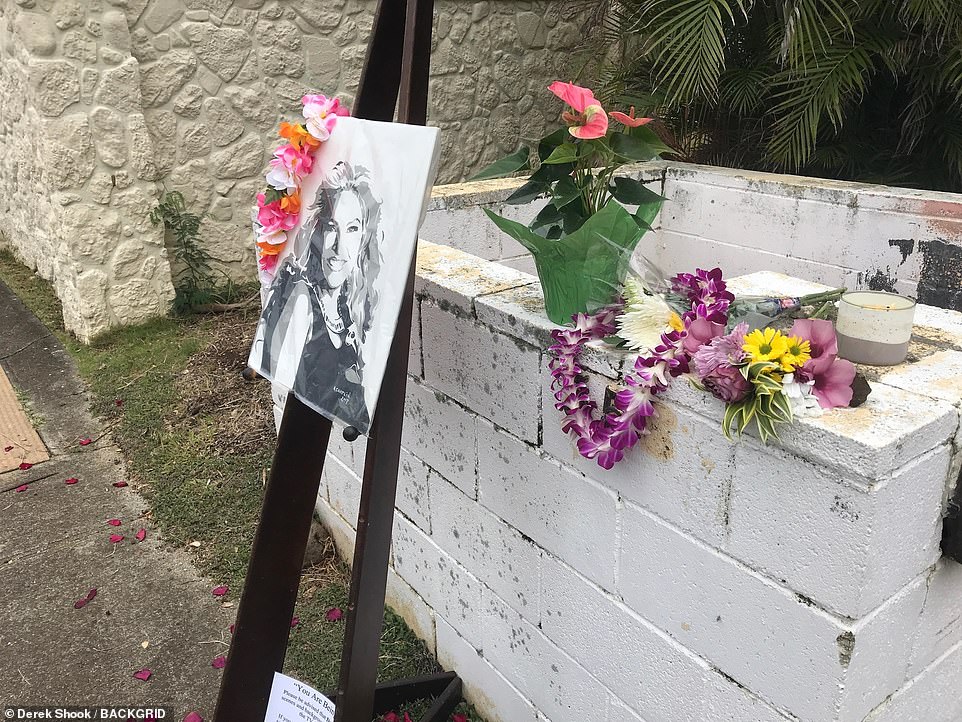 Already, sympathetic fans had begun leaving flowers and leis at the memorial for Beth 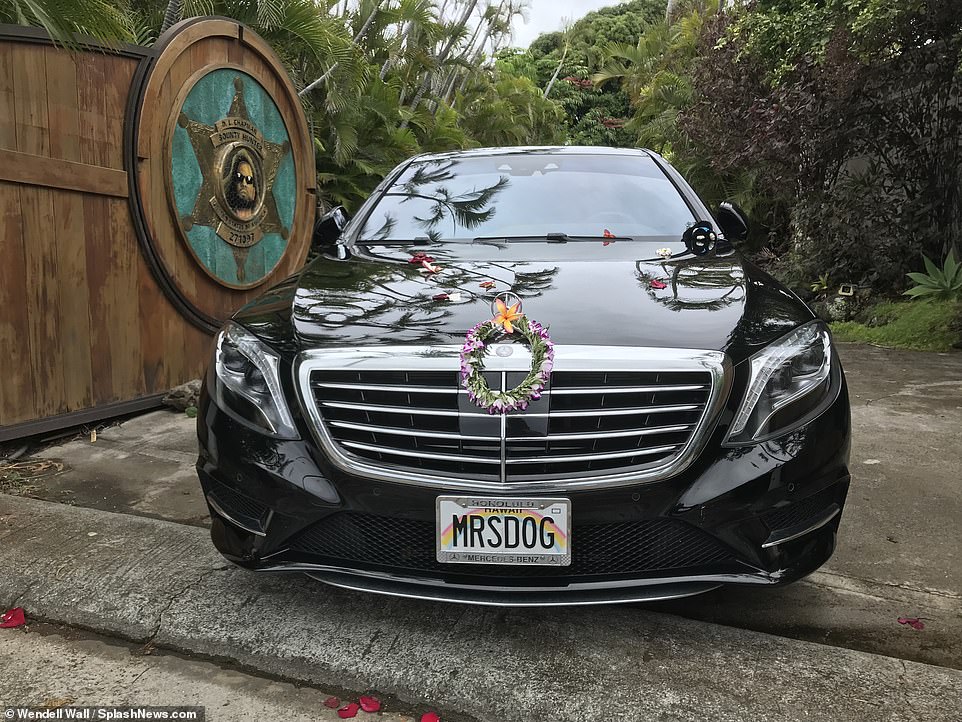 Beth’s car, with its distinctive license plate, is seen in front of the Chapman compound 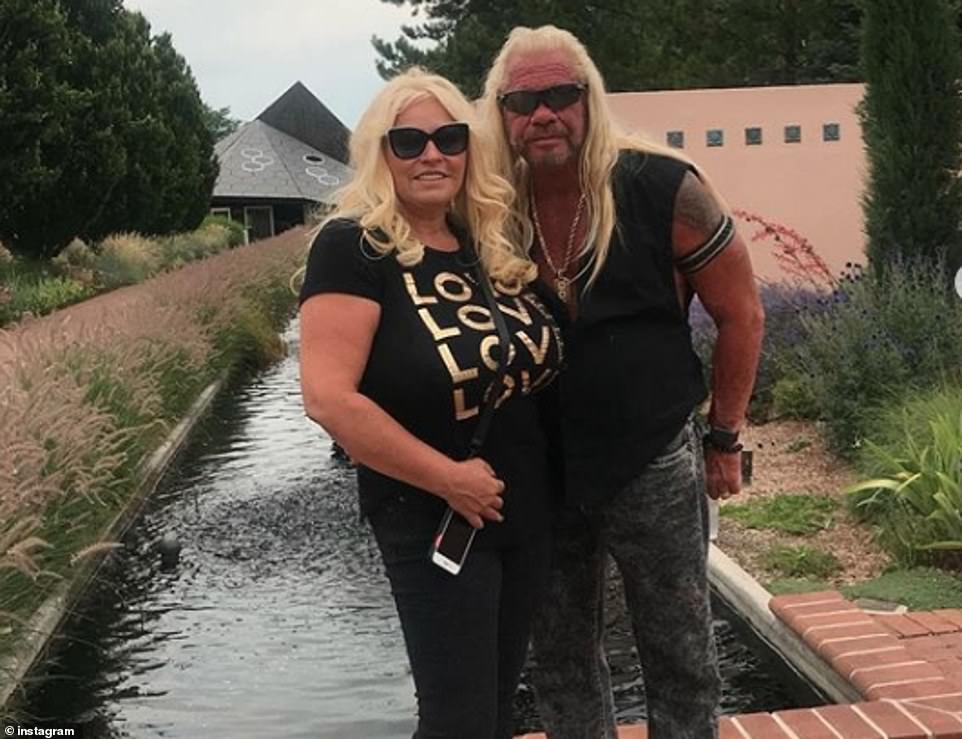 Dog and Beth married in 2006, and were constant companions on his famed TV show

Beth was diagnosed with stage II throat cancer back in 2017 after she went to the doctor with complaints of persistent coughing.

She underwent surgery to have a tumor removed that same year, and was declared cancer-free shortly after that operation.

It returned however as stage IV lung cancer in November 2014.

Beth’s family has been her side for the past few days, with both Bonnie and her father posting photos of the Chapman family matriarch’s distinct nails.

Even in her hospital bed, Beth’s lengthy acrylic nails were painted and bejeweled in her distinct fashion. 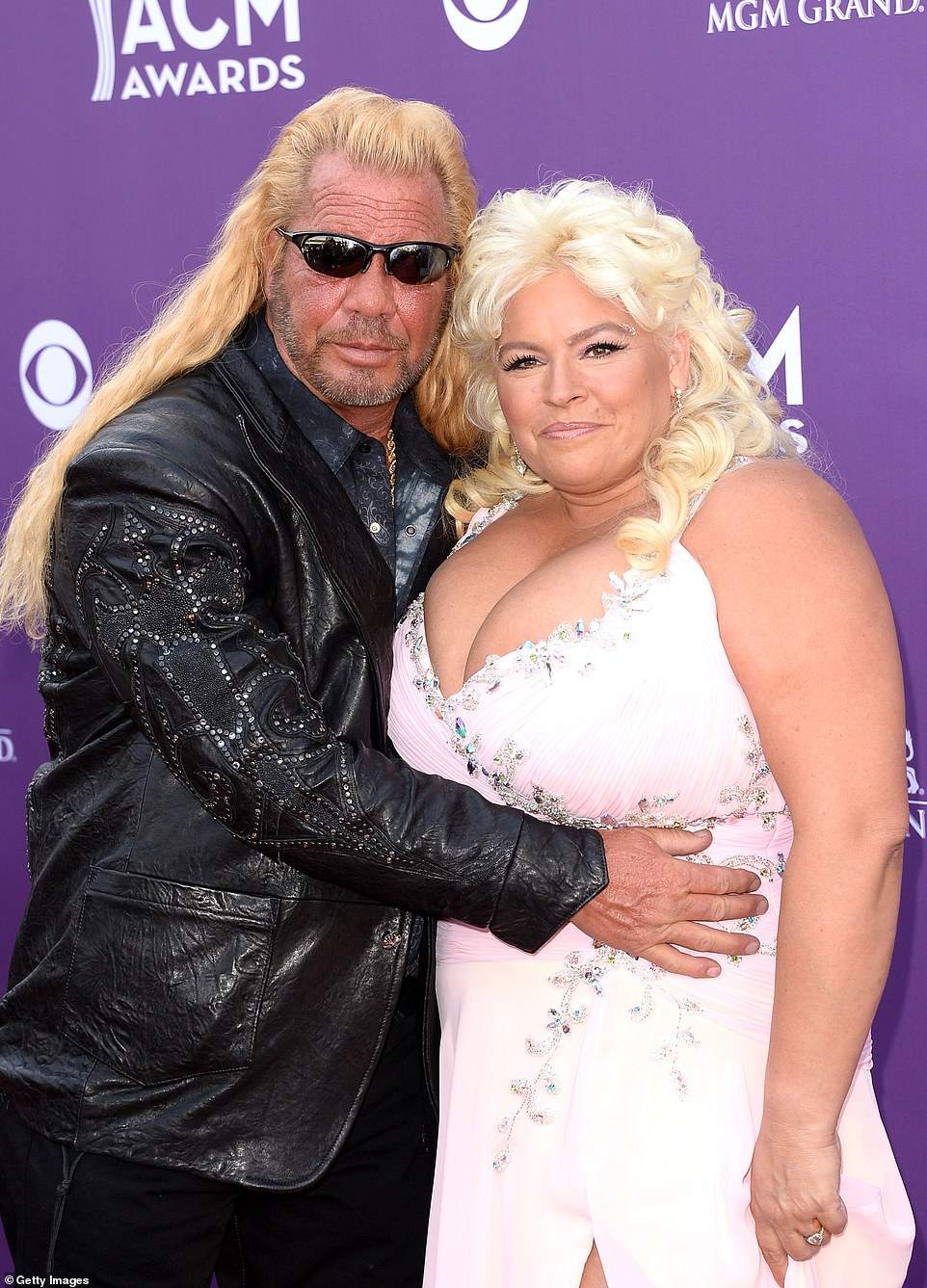 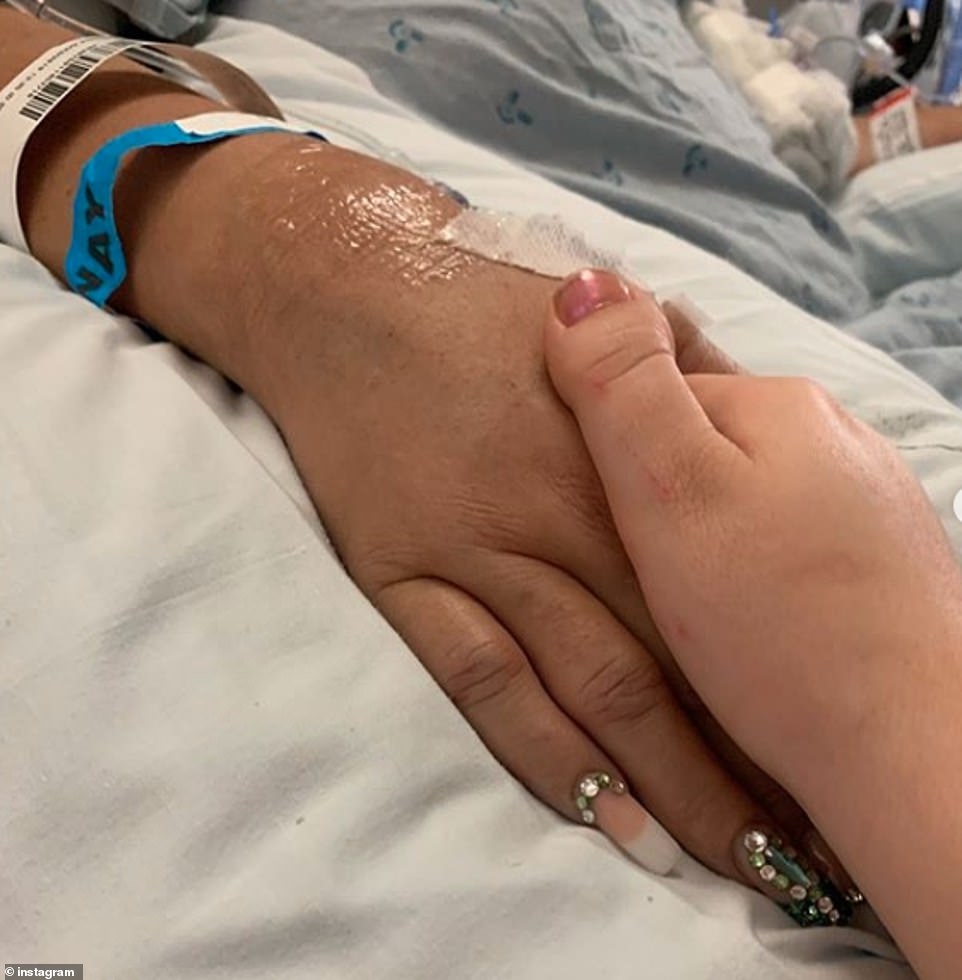 ‘So thankful to call you my mother,’ she wrote with a photo clutching her mom’s hand. ‘Rest In Peace, mom. I love you so much.’ 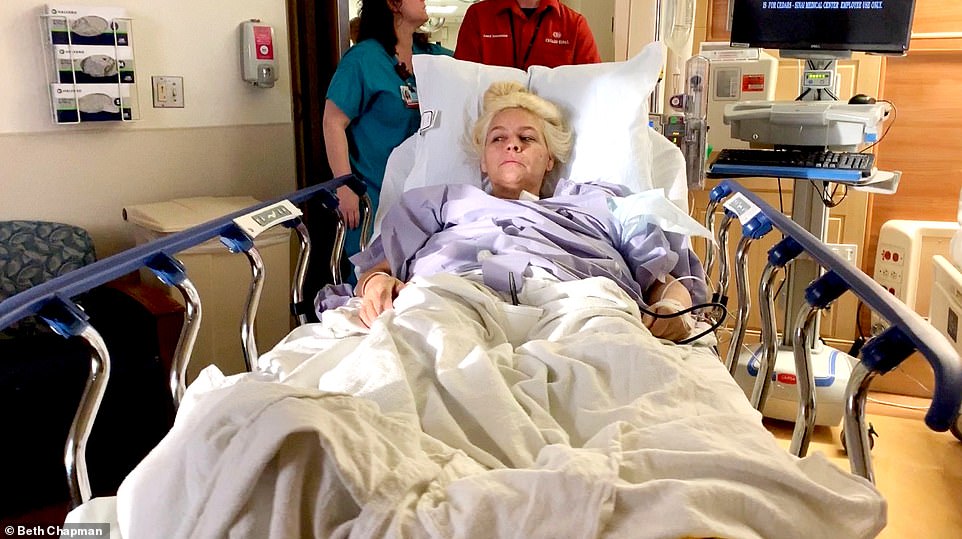 Recovering: Beth was diagnosed with stage II throat cancer back in 2017 after she went to the doctor with complaints of persistent coughing (Beth above ) 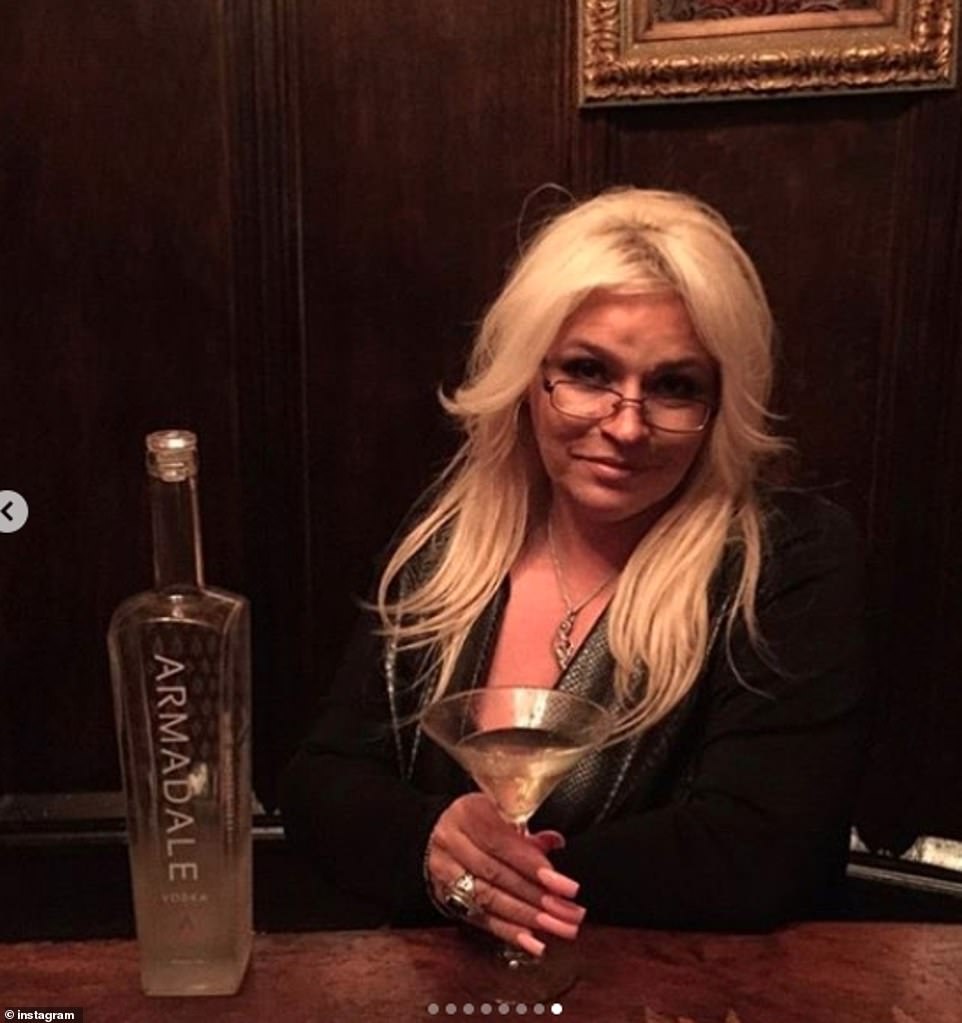 Proud mom: Beth is survived by her husband and four children: Bonnie Jo, Cecily, Dominic and Garry, in addition to 14 grandchildren

She was born Alice Elizabeth Smith in Colorado, where she made a little bit of history at the age of 29  by becoming the state’s youngest bail bondsman.

That record would later be bested by her own stepdaughter, Lyssa.

Beth was just 19 when she met her future husband, who was 16 years her senior.

The two had an on-and-off relationship for years, and both went on to marry other people and have children, before tying the knot in 2006.

Beth married Chapman’s best friend at one point before the two decided to officially go into business and start a life together in 1995.

It was decided at the time that the couple would go ahead with the nuptials as a celebration of Barbara’s life.

Beth was Chapman’s fifth wife, and the couple had two children together – Bonnie and Garry.

Chapman later adopted Beth’s daughter Cecily and found her son Dominic, who had been taken from his mother’s custody when she was 16 by the state of Colorado. 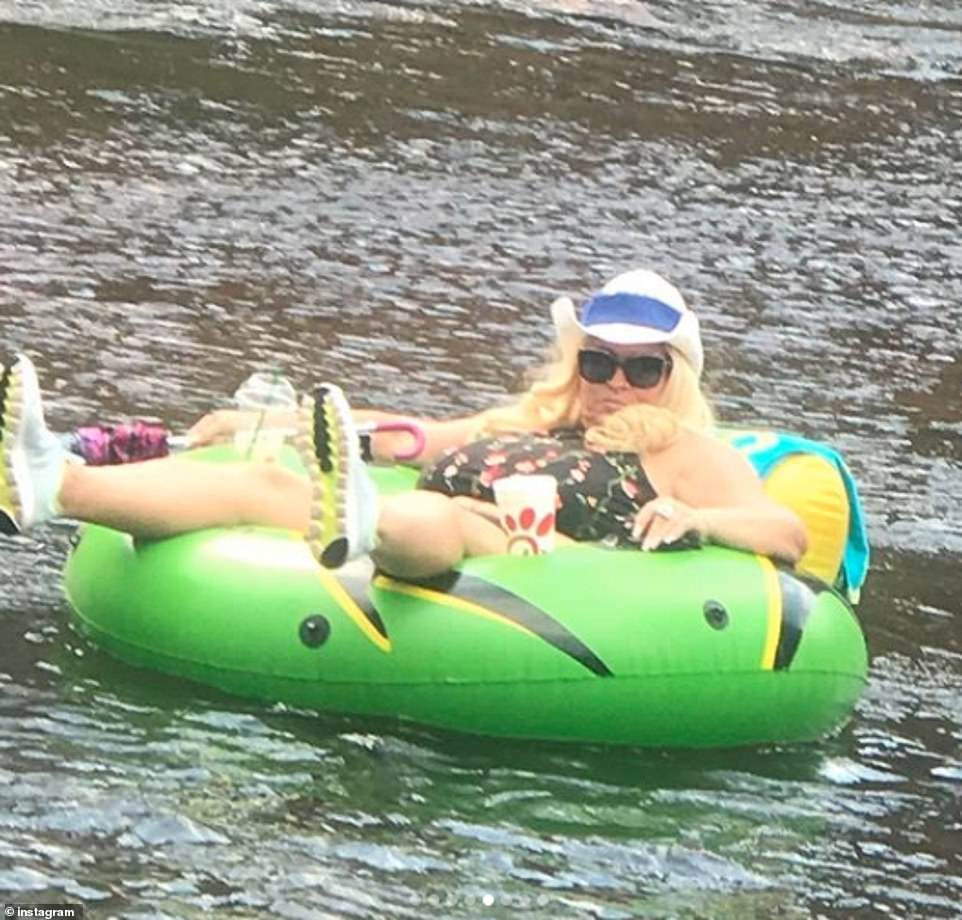 Floating on: She was born Alice Elizabeth Smith in Colorado, where she made a little bit of history at the age of 29 by becoming the state’s youngest bail bondsman. 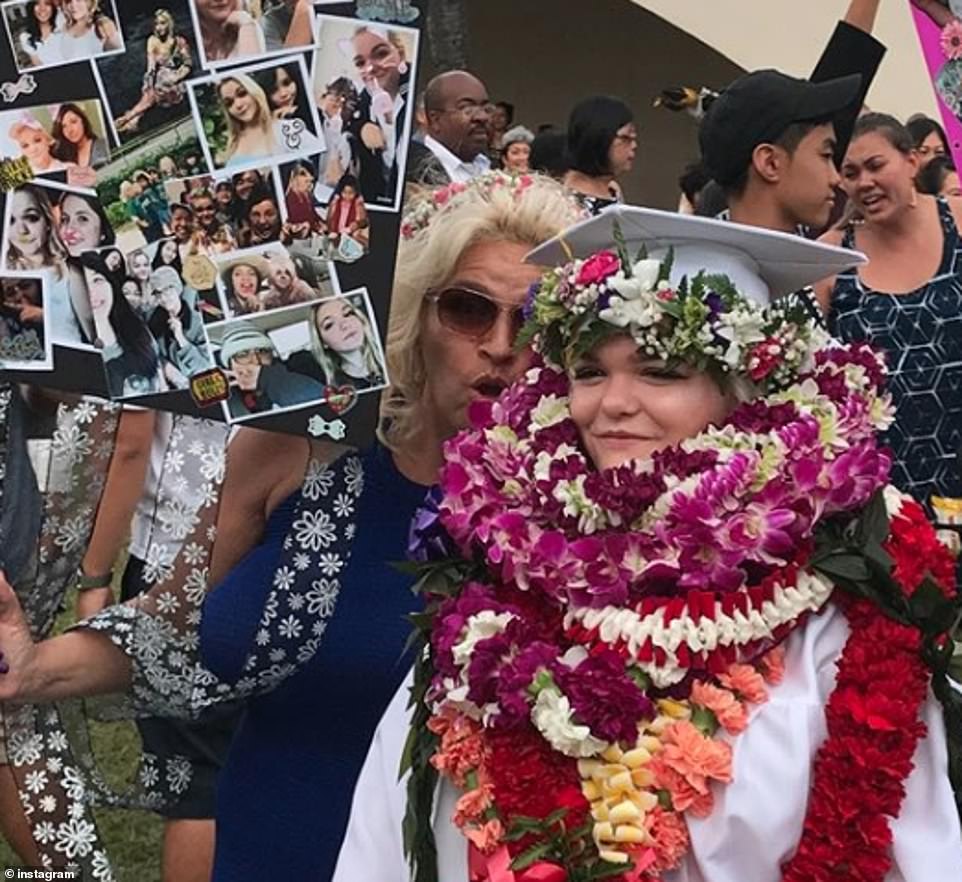 Cap and gown: ‘I never thought I’d lose my mom at 20. I told her I thought she had a couple years left, but her eyes disagreed,’ wrote Beth’s daughter Bonnie on Twitter

The pair had become familiar to many by the time they wed, having catapulted to fame in 2003 when their series premiered on A&E.

The mixed family of bounty hunters, which also included two of Chapman’s 12 children – Leland and Duane Lee – caught the eyes of viewers thanks to the family’s over-sized personalities, and the fact that Chapman did not use a gun while apprehending suspects.

That was not by choice, but rather as a result of a first-degree murder conviction in 1976 for which he was sentenced to five years in prison.

Chapman was in the car with a friend when the young man shot an alleged drug dealer while attempting to purchase marijuana.

He only served 18 months of that sentence, but it was behind bars that he claims to have gotten the idea to become a bounty hunter.

The series ended in 2012, but Beth and her husband continued to star in a spin-off, Dog and Beth: On the Hunt.

That spin-off ended in 2015, but earlier this year the couple started filming the program Dogs Most Wanted, just a few months after Chapman was diagnosed with lung cancer.

Her health struggles will be a part of the show, and in a preview released earlier this month by WGN she is seen kissing her husband from a  hospital bed.

‘We are deeply saddened by the tragic news that Beth Chapman lost her battle with cancer today. She was an exceptional woman, fiercely loyal and passionate about her family and she was a true joy to work with,’ said WGN in a statement.

‘All of us at WGN America will miss her tremendously. Our thoughts and prayers are with Duane, her family, loved ones and millions of fans.’