Reality TV star and bounty hunter Duane ‘Dog’ Chapman has vowed to give up smoking four months after losing his beloved wife Beth to lung cancer.

The 66-year-old widower recently sat down with Dr. Mehmet Oz on his eponymous talk show to have a candid conversation about his health, confronting his issues with smoking following Beth’s death head on.

‘When I see a man who’s able to do the things he wants to do in life, raise solid kids, be in love with a woman with all your heart, be successful in your day job, catching folks, being a TV star. I mean, the things you want to do, Dog, you do well,’ Dr. Oz says in an exclusive clip from the episode, which airs on Monday.

Intervention: Reality TV star and bounty hunter Duane ‘Dog’ Chapman recently sat down with Dr. Mehmet Oz on his eponymous talk show to have a candid conversation about his health 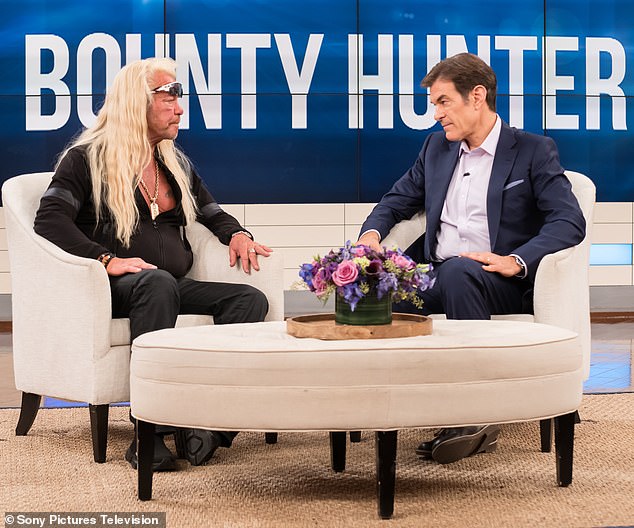 Heartbreak: The 66-year-old was confronted with his issues with smoking following the passing of his beloved wife Beth, who died of lung cancer in June at the age of 51

‘I’m worried about your cigarettes, but I’m more worried about why you’re smoking,’ he admits. ‘So I want to get to the root cause of that.’

Dr. Oz reminds Chapman that he is a role model for so many people. If he decides to quit smoking, others may follow in his footsteps.

‘I want to touch on this a little bit because it’s critical, not just for you, Dog, but there are millions of people who admire you, respect you,’ he explains. ‘They’re going to follow what you do.’

Chapman thanks Dr. Oz for the kind words and makes it clear that he is taking what he has said to heart. 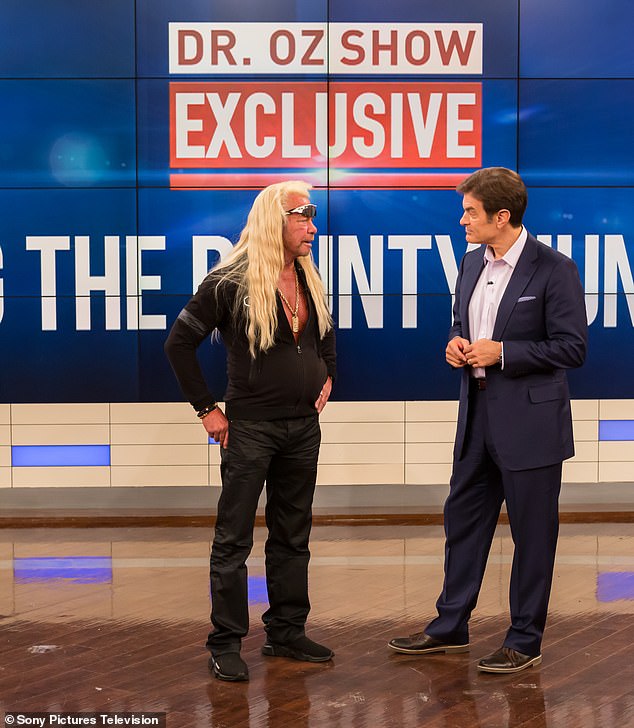 Goal: Chapman vowed to show his fans that he can quit smoking and get his health in check

‘You know, I’m glad you say that, because I’ll show them. I’m going to stop,’ he promises.

In September, Chapman was rushed to a hospital in Colorado after having chest pains. Shortly after his health scare, he shared on Instagram that Dr. Oz was with him in Colorado.

That same month, he appeared on The Dr. Oz Show, revealing that he was diagnosed with a pulmonary embolism — a blood clot from the heart to the lungs — and would not live much longer if he did not improve his heart condition.

Chapman spent Tuesday on what would have been his late fifth wife’s 52nd birthday ‘alone at home in Denver crying.’

‘He spent the entire time indoors going through photos of Beth and himself,’ a source told TMZ on Friday. 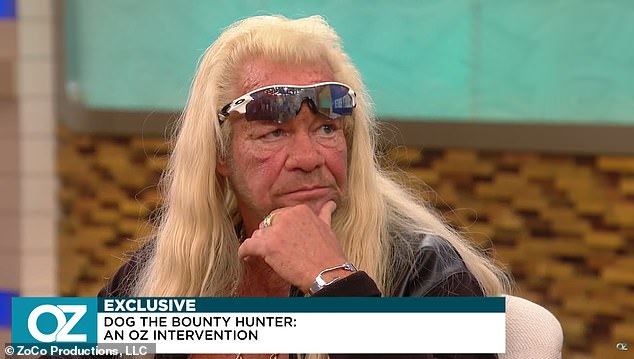 Professional help: Chapman has been discussing his health with Dr. Oz for months 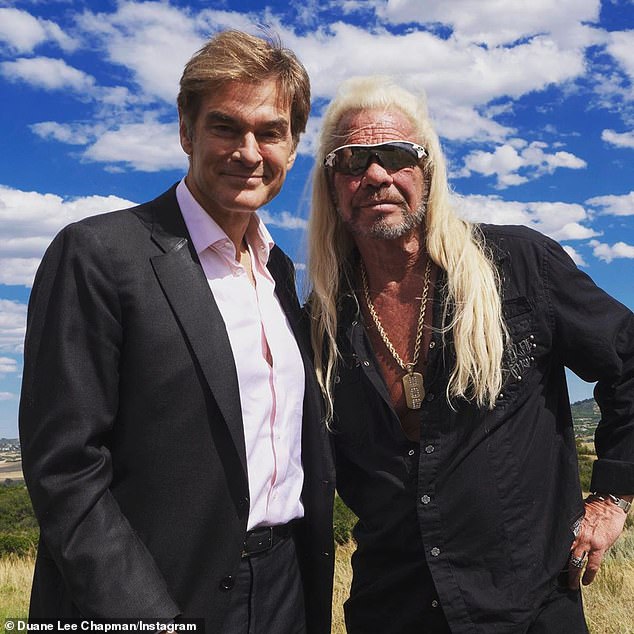 Health scare: Shortly after being rushed to the hospital with chest pains, Chapman revealed on the Dr. Oz Show in September that he was diagnosed with a pulmonary embolism

‘It was a tear-filled day. He called their children and many of Beth’s friends to reminisce and talk about the positive impact she had on their lives.’

The grieving widower was very active on social media Tuesday, posting old clips of Beth from their reality show, Dog’s Most Wanted.

‘There will never be another like you. Happy birthday Beth! We [love] you!’ Chapman gushed.

One of the clips showed Beth vowing, ‘If I’m gonna die, I’m gonna die in my boots,’ and another had Duane telling her, ‘Listen, I love my job, but I love you more.’

Chapman also reposted a picture of himself with his wife, which she had originally captioned: ‘Sooooo in love with this guy!’ 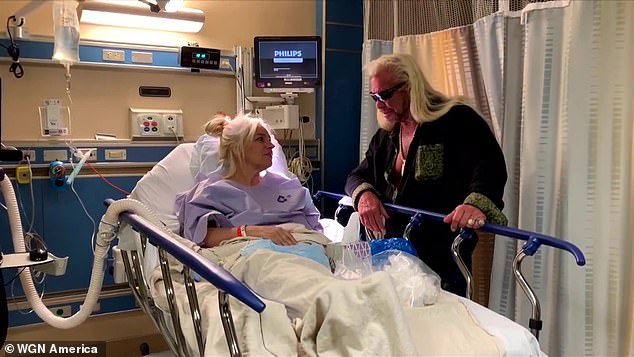 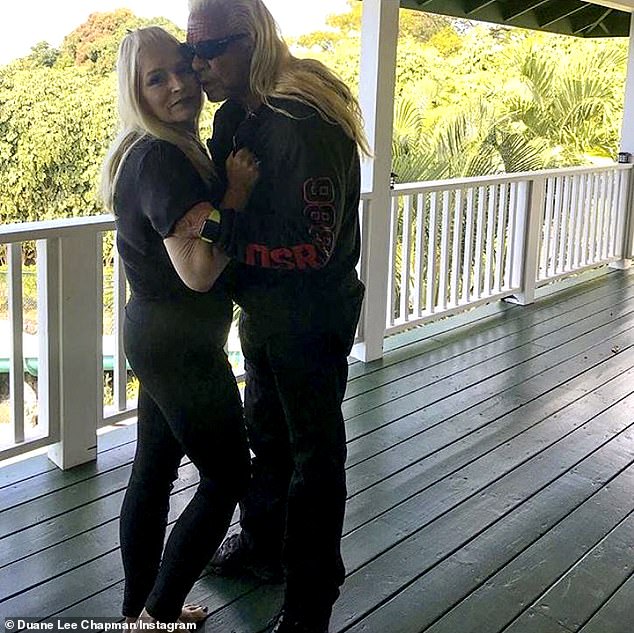 In mourning: Chapman spent Tuesday on what would have been his late fifth wife Beth’s 52nd birthday ‘alone at home in Denver crying’

Beth was diagnosed with stage II throat cancer in 2017 after she went to the doctor with complaints of persistent coughing.

She underwent surgery to have a tumor removed that same year and was declared cancer-free shortly after the operation. However, she was later diagnosed with stage IV lung cancer in November 2018.

The mourning father-of-12’s wife died on June 26 at the age of 51, four days after being placed in a medically-induced coma.

Chapman and his family hosted her Waikiki memorial at Fort DeRussy Beach on June 29 followed by her celebration of life on July 13 at the Heritage Christian Center in Aurora.