Dog walker, 33, claims he developed deadly meningitis after being bitten by a tick

A dog walker claims he developed life-threatening brain inflammation after being bitten by a tick in what would be the first case of its kind in the UK.

Tom Varga alleges he was bitten by a tick, which he later removed, while walking his dog Cher on the fells near Millom in the Lake District in August last year.

The 33-year-old’s symptoms only came to light 10 months later when he began experiencing extreme fatigue, headaches and eye pain, which led to him being diagnosed with tick-born encephalitis (TBE).

After the deadly virus manifested into brain inflammation, Mr Varga, a sous chef, was left fighting for his life and was only discharged from hospital two weeks ago, with him claiming he is 95 per cent of the way to being back to his normal self.

TBE is common in parts of Europe, Russia, northern China and Japan, however, according to the charity Encephalitis Society, the virus has ‘never been present in the UK’.

Although there is a chance Mr Varga may have picked up the infection while visiting family in his native Hungary, he is adamant he contracted TBE in the UK and is speaking out to warn others to be vigilant against ticks.

Dog walker Tom Varga (pictured with his pet Cher on the fells in the Lake District) became ill 10 months after he claims he was bitten by a tick. It is unclear if the bite took place when this photograph was taken. Experts claim tick-borne encephalitis is not present in the UK

Mr Varga, who is in a relationship, said: ‘I was bitten by a tick a year ago while walking in the Lake District and I remember having to remove it with a pair of tweezers.

‘I thought nothing more of it and felt fine and healthy up until June when I started experiencing extreme lethargy and headaches.

‘It felt like my eyes were on fire, as if they’d been replaced by two pieces of red-hot charcoal, melting my sockets. In my brain it felt as if a hedgehog had awoken and was trying to get out.

‘At one point I had to wrap a dressing gown belt around my skull and bury my head in a pillow in order to apply pressure and try to ease the pain.

‘I’d never been this unwell in my whole life. I’d never even been in hospital before.’ 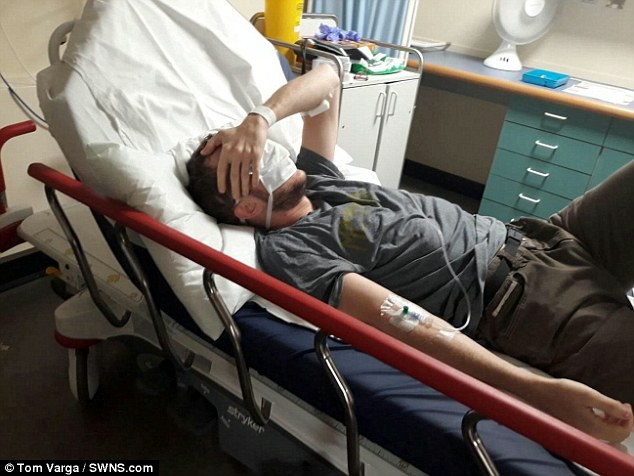 After experiencing extreme fatigue, headaches and eye pain, Mr Varga was rushed to Furness General Hospital in Barrow where he was diagnosed. Mr Vagra is pictured receiving antibiotics

WHAT IS TICK-BORNE ENCEPHALITIS?

Tick-borne encephalitis (TBE) is an infection spread by tick bites.

According to the NHS, it is not found in the UK but is present in other parts of Europe, Russia, China and Japan.

Symptoms can be flu-like, such as feeling hot, headaches, aching muscles and nausea.

In severe cases, TBE can cause brain inflammation, which may lead to sufferers experiencing a stiff neck, dislike of bright lights, seizures,  behavioural changes or loss of movement.

Ticks live in forests and grassy areas. Therefore people may be more at risk if they are hiking or camping, however, not all ticks spread TBE.

If visiting an area with TBE, people can get vaccinated against the virus, with two jabs offering around a year’s protection.

This vaccine is not available on the NHS.

Doctors thought he had HIV

After developing symptoms, Mr Varga was sent home by his GP but returned the following day complaining of a stiff neck and extreme light sensitivity, which led to him being rushed to Furness General Hospital in Barrow.

Due to Mr Varga returning from a holiday in Africa last February, he claims he was given antibiotics and kept in isolation for six days, with medics fearing he had a contagious disease.

His central nervous system was so badly affected doctors even suspected he may have HIV, he claims.

Yet following multiple tests, including a CT scan, X-ray and blood examinations, Mr Varga was diagnosed with TBE.

‘My recent illness has certainly made me extra vigilant about protecting myself from ticks and I’d urge others to be wary, too.’

Despite TBE never being seen in the UK, Mr Varga maintains the only time he has been bitten by a tick is in Britain, with him regularly removing the pests from his dog after walks in Cumbria.

He also recently attempted to walk all 214 of the Lakeland fells documented by the acclaimed author Alfred Wainwright.

Mr Varga, who spends a week every year visiting family in Hungary, admits it is impossible to say whether he contracted TBE in the UK or abroad.

But added: ‘I can’t say with 100 per cent certainty, but I’d be amazed if the TBE hasn’t been contracted here in the UK.

‘We have a lot of ticks here in the Lake District. They’re a common sight for me. So much so that I end up picking them off the dog once a week.’

According to the vet Iain Booth: ‘More and more vets are reporting increased numbers of parasites in the UK, including ticks and tick-borne diseases.

‘One possible reason for the rise is the fact more dogs have pet passports to travel in Europe, as well as an increase in dogs being imported to the UK from rescue centres abroad.

‘If Tom is correct in his assertions, his case could prove concerning indeed.’

How to prevent tick bites

Repel Ticks on Skin and Clothing

Find and Remove Ticks from Your Body