Dog walker is left with shocking injuries in Barnsley

A grandfather was left with a black eye and a swollen jaw when a biker pinned him to the ground and screamed in his face: ‘Have you had enough yet?’

Peter Copley, 57, claims the man repeatedly punched him after he injured his three-year-old pug Alfie.

He was left with severe facial injuries after he approached the biker who he claims tried to drive off after hitting his dog.

Mr Copley was walking his four pugs on a field in Barnsley, South Yorkshire, at around 4.30pm on Sunday when the biker drove across the field ‘at 25 mph’.

He said the biker hit Alfie and Mr Copley tried to make him stop and hand over his details.

Mr Copley claims a scuffle ensued as he tried to stop the biker from making another getaway and he said he launched a frenzied attack.

The bus driver, from Barnsley, South Yorkshire, said: ‘He pushed me first and I then saw him pull the clutch on the handlebars.

‘I thought he was going to get away so I pushed him back and he fell over on the grass.

‘When he got up he just started punching me. I fell to the floor and he pinned me down – his knees were on top of my arms and he just kept punching my face.

‘He had leather gloves on with some sort of protection on the knuckles which is where the marks on my face have come from. 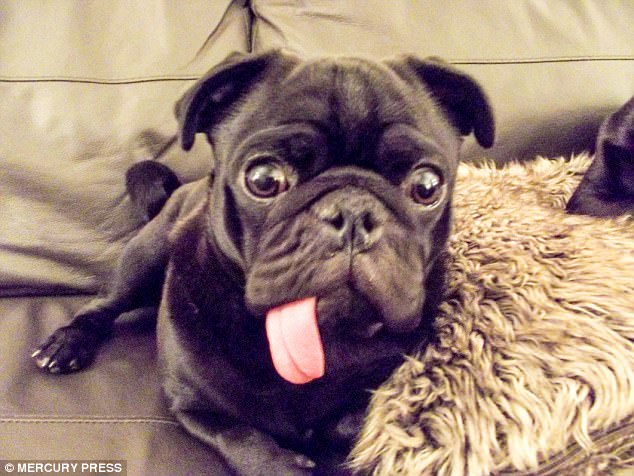 ‘It was only later I remembered that he kept saying “have you had enough yet?”.’

Another dog walker on the field rushed over and dragged the man off Mr Copley and called police to report it.

Mr Copley added: ‘I didn’t hear any barking at all, all I could feel was punches on my face. As silly as it sounds all I was worried about was my dog.

‘I suddenly heard a man’s voice as he was hitting me which kept saying “get off him”.

‘Knowing someone was coming over reassured me – and he pulled him off me.’

Mr Copley rushed to Alfie’s side and, realising the extent of his injuries, phoned his cleaner wife Pam, 54, to get him to a vet as quickly as possible.

He said: ‘I didn’t know until I got over to him how bad it was. I saw his flesh was hanging off his leg and also a little bit of bone at the top of was poking out.

‘He needed internal and external stitches but they had to wait a couple of hours before performing surgery as his blood pressure dropped after going into shock.’

Alfie is now restricted to limited exercise and is on painkillers while he recovers. 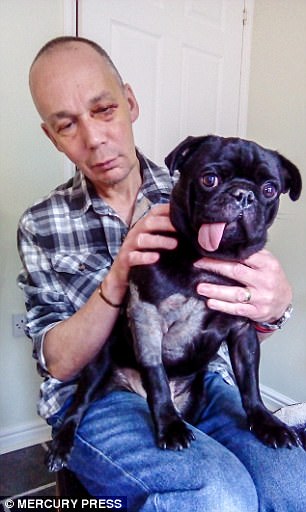 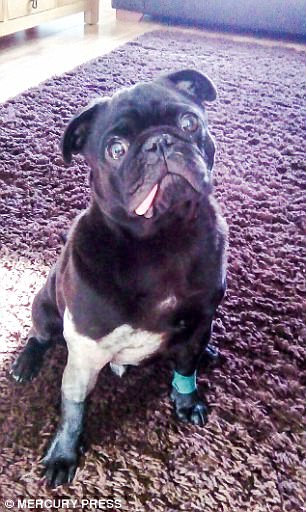 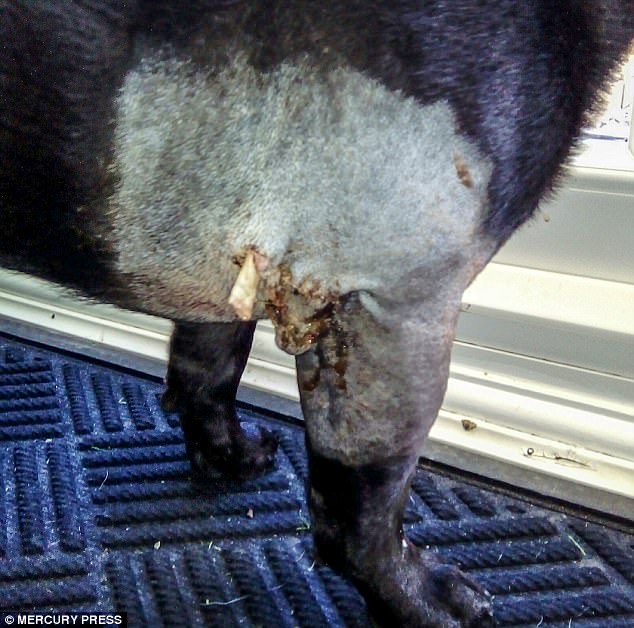 Mr Copley said: ‘The biker was really going at it, he could have just carried on punching me.

‘I do think about what would have happened to me if the other guy hadn’t been there – I can’t thank him enough.’

South Yorkshire Police confirmed the incident had been reported to them.

A spokesman said: ‘At around 4.30pm on Sunday 22 October, it is reported that a 57-year-old man was assaulted by an unknown man while out walking his dogs in the Midland Road area of Royston, Barnsley.

‘A 52-year-old man has been voluntarily interviewed under caution in connection to the incident and released pending further enquiries.’