Dogecoin fans are trying to orchestrate a push to send the dog-themed cryptocurrency to a new high as 20 April is, apparently, both marijuana day and ‘Dogeday’.

If it all sounds a bit silly, then just remember that Dogecoin was introduced as a joke currency in 2013 and was worth almost nothing.

But the dog-themed currency has gained quite a lot of attention in recent months, especially after Tesla’s boss Elon Musk tweeted his approval of the virtual currency in February.

And fans of the cryptocurrency are hoping to send Dogecoin price more than doubling to a record high of $1 today, which they decided was ‘Dogeday’ and which also coincides with marijuana day.

The #DogeDay420 campaign has been trending across Twitter and Reddit, with users encouraging each other to buy more of the cryptocurrency, in what resembles the GameStop frenzy seen at the start of the year.

But despite the massive rise in price this week and the coordinated push, Dogecoin was down around 7 per cent over the past 24 hours.

‘As we saw with the GameStop frenzy earlier in the year, traders have once again adopted a game mentality, trying to propel the price higher using hashtags and rallying cries on internet forums,’ she said.

‘Once again the potent mix of social media and easy access to trading in the cryptocurrency has led to heightened speculation.’ 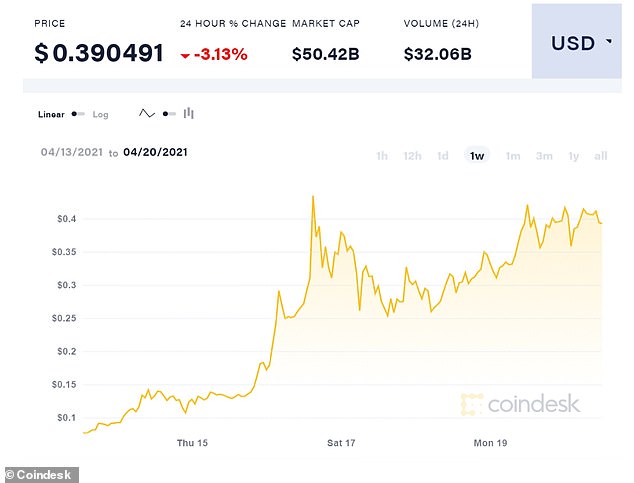 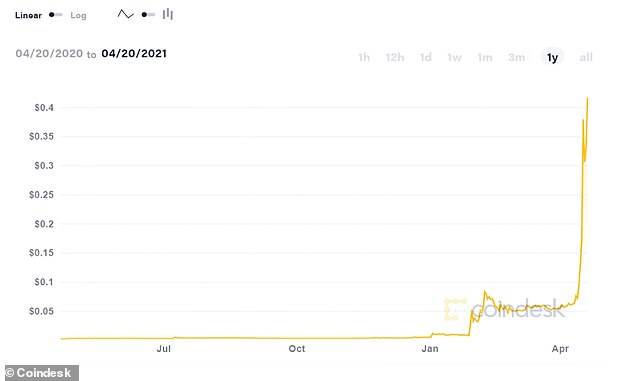 Crazy year: Dogecoin price has soared 19,420% over the past twelve months

She added: ‘Investors should be extremely cautious about getting caught up in this herd mentality because Dogecoin is very much a speculative bet whose valuation has no reliable basis.

‘Demand has come from traders trying to ‘game’ the system and others hoping to benefit from future price rises rather than use the coins as a means of exchange.

‘Predicting the point at which demand subsides and prices begin to fall is very difficult, if not impossible and people risk getting their fingers seriously burnt.’

Dogecoin’s ascent comes amid the growing popularity of virtual currencies and has also been propped up by Elon Musk, who in February tweeted that ‘Dogecoin is the people’s crypto’.

Meanwhile, leading free stockbroker Robinhood supports Dogecoin, which has also played a role in driving up its price.

Dogecoin was initially started as a satirical critique of the 2013 crypto frenzy by two software engineers, but it can be bought and sold on digital currency exchanges.

Binance and Kraken are the largest exchanges that offer Dogecoin trading.