Three dogs were left to ‘bake alive’ for four hours in a cage while covered in blankets and cushions on the hottest August Bank Holiday on record.

Their owner had driven a white van to the annual Newlyn Fish Festival in Cornwall on the balmy Monday morning.

It was here that the woman left her van with the three dogs inside of it parked in temperatures that exceeded 82F (28C) throughout the day.

Horrified onlookers noticed the canines and were able to alert authorities before it was too late for the trio, who were covered in blankets and cushions inside the back of the van.

The woman had caged her dogs inside a pen (pictured), covered over with blankets and cushions, and left them so she could visit the annual Newlyn Fish Festival in Cornwall

It’s not clear if she was a trader with a stall at the festival or had joined hundreds of holidaymakers enjoying snacks and cooling drinks on the baking hot Bank Holiday Monday.

With the sun blazing down in temperatures approaching 83F, the dogs would have been panting within minutes inside their metal ‘death trap.’

After checking with police, a woman got into the white van and released the dogs, frantic for water which was quickly poured out for them.

The dogs were in the back of the white panel van which also had a child’s car seat on the front passenger’s side.

Posting a photo of the distressed dogs, a spokesman for local pets group Pams Paws said: ‘Afraid to say our day at Newlyn Fish Festival finished on a low yet again, an irresponsible woman left these three dogs in their van from 11am and they still hadn’t returned at 3.30. 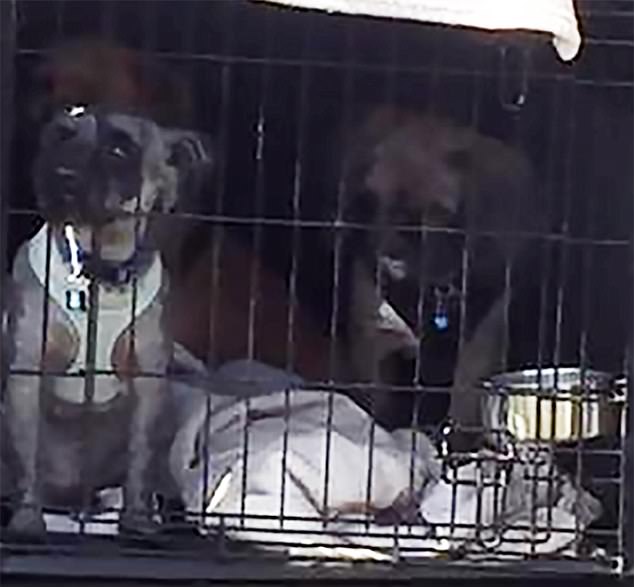 ‘Thanks to a lovely lady, managed to open the doors and give them water – they were all three in a cage covered with a blanket then cushions all around the cages. If she hadn’t intervened they most probably wouldn’t have made it.

‘I spoke to the policeman and he said they needed to come out of the van so I went and got them out of the cages and we walked them into the festival to where we eventually found the owner.’

The RSPCA warns never to leave your dog alone in a car on a warm day. It says if you see a dog in distress in a hot car, dial 999 as breaking into the car can be classed as criminal damage without ‘proper justification.’

Their website is clear about what to do if you spot a pooch in trouble.

‘Many people still believe that it’s okay to leave a dog in a car on a warm day if the windows are left open or they’re parked in the shade, but the truth is, it’s still a very dangerous situation for the dog. 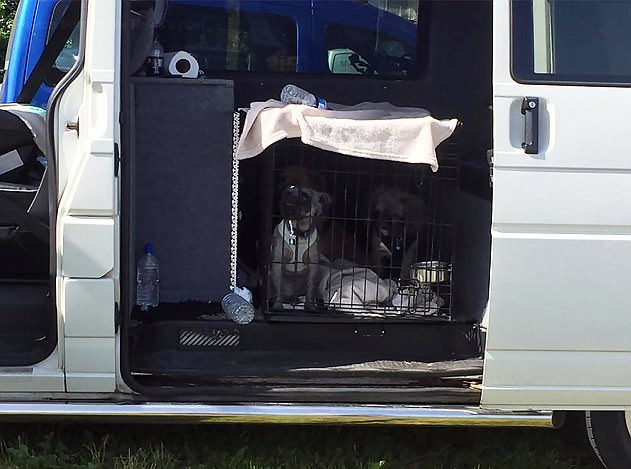 After checking with police, a woman got into the white van and released the dogs (pictured), frantic for water which was quickly poured out for them

‘A car can become as hot as an oven very quickly, even when it doesn’t feel that warm. When it’s 22 degrees, in a car it can reach an unbearable 47 degrees within the hour.

‘Establish the animal’s health/condition. If they’re displaying any signs of heatstroke dial 999 immediately.

‘If the situation becomes critical for the dog and the police are too far away or unable to attend, many people’s instinct will be to break into the car to free the dog.

‘If you decide to do this, please be aware that without proper justification, this could be classed as criminal damage and, potentially, you may need to defend your actions in court.

‘Make sure you tell the police what you intend to do, why, and take images/footage of the dog and the names and numbers of witnesses to the incident.

‘The law states that you have a lawful excuse to commit damage if you believe that the owner of the property that you damage would consent to the damage if they knew the circumstances.’